The Controversial History Of Absinthe, The Drink So Strong Some Feared It Would Cause Society To Collapse

A highly alcoholic spirit originating from Switzerland, absinthe is legendary for its strength. But its potency also led to absinthe being banned in several countries for its perceived link to crime and debauchery.

Forever associated with creative types like Ernest Hemingway and Oscar Wilde, absinthe has a decidedly literary — and notorious — reputation. Once believed to be hallucinogenic, this green-hued spirit became a subject of controversy in the early 20th century. But what is absinthe? And what’s it like to take a sip of the drink?

Wilde once described drinking the spirit in a way that only a writer can: 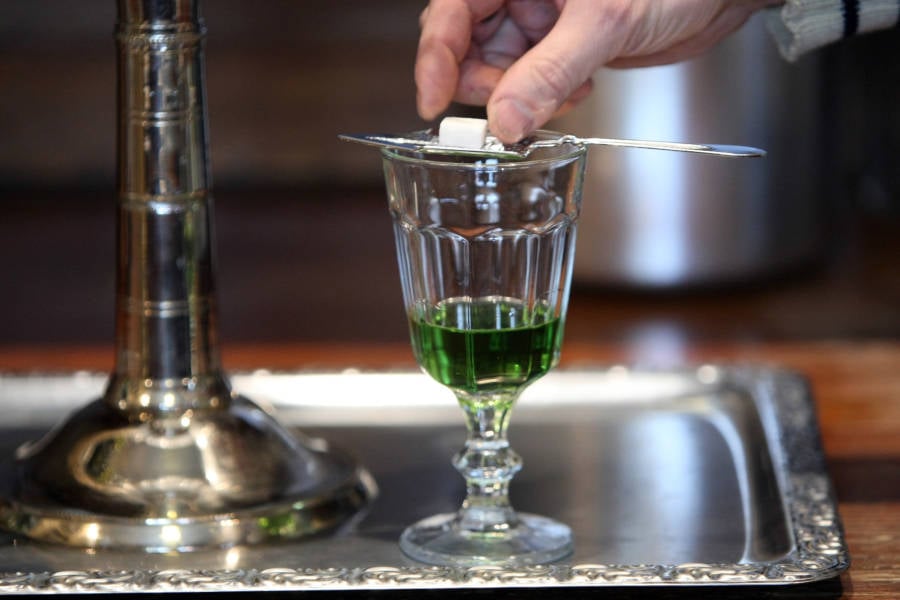 Adam Berry/Getty Images The green drink was once infamous for its purported hallucinatory properties.

But for all the mysticism that surrounds absinthe, this green drink is deeply terrestrial. Still, the boozy beverage remains somewhat infamous due to its perceived link to crime and debauchery throughout history. And of course, many modern drinkers might be curious as to whether imbibing absinthe is any different than downing, say, whiskey or rum.

This is the story behind one of the most controversial alcoholic beverages. 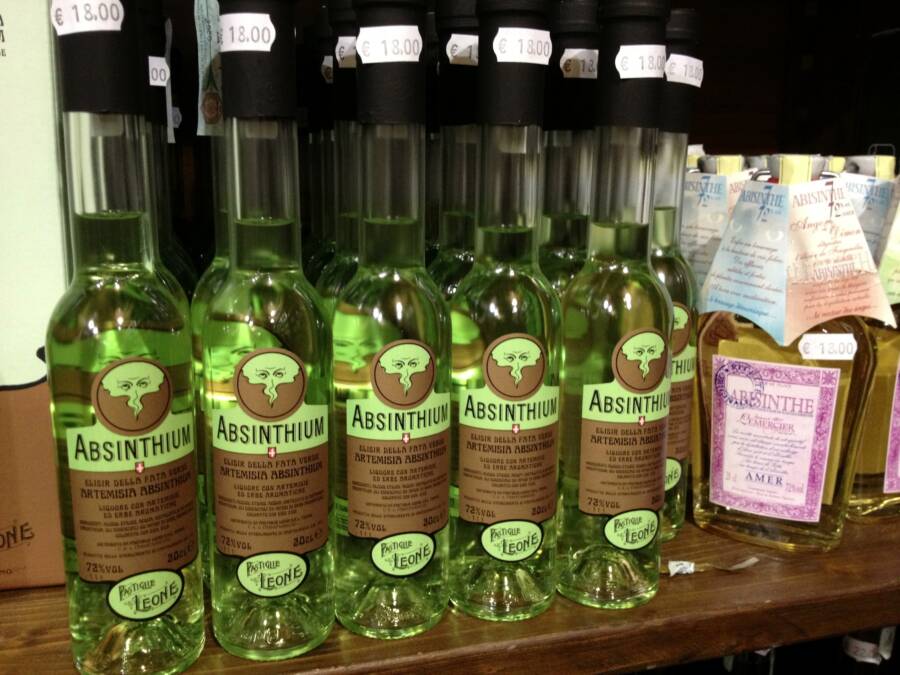 Wikimedia CommonsAside from being strong, absinthe can also be deceptively sweet — perhaps making it even more powerful.

At its most basic, absinthe is a spirit with very high alcohol content — generally between 110 and 144 proof. The spirit comes in two forms: absinthe verte (which is green) and absinthe blanc (which is white).

Traditionally, absinthe is made from a white grape-based spirit, wormwood, anise, fennel, and some other herbs. Absinthe verte gets its famous Tinkerbell-green color from those herbs.

The anise is an important ingredient — it gives the drink its distinctive taste. “The first thing I ask people is, ‘How do you feel about black licorice?'” noted Matt Johnson, who owns a bar in Portland, Oregon. While absinthe doesn’t taste exactly like black licorice, the flavor is said to be somewhat similar. So, if someone hates black licorice, he recommends something else.

Those are the basics of the spirit, but the drink’s allure comes from how it makes people feel. Anyone who has seen Moulin Rouge knows about La Fée Verte (the green fairy) and the spirit’s allegedly hallucinogenic properties. But is absinthe really a hallucinogen — or are its effects exaggerated?

The effects of absinthe as portrayed in Moulin Rouge.

The drink gets its hallucinogenic reputation from the chemical thujone, which occurs naturally in the drink. Thujone can cause convulsions and even death in high enough concentrations. But this is practically impossible from drinking the spirit casually.

A devotee of the green fairy is much more likely to suffer alcohol poisoning well before overdosing on thujone. One distiller estimated that a person would have to drink three bottles to feel the effects of thujone. And even in high doses, there’s no hard evidence that thujone causes hallucinations.

The myth of the spirit’s power also comes from artists like Henri de Toulouse-Lautrec, Vincent van Gogh, and Oscar Wilde.

“All those artists were drinking absinthe, but they were doing other stuff, too,” Johnson said. “They were experimenting with drugs and everyone was drinking out of leaded glasses. So there was other stuff going on.”

In short: Absinthe is not a hallucinogen. You probably won’t see a green fairy if you drink it. But that doesn’t mean that this spirit isn’t incredibly strong.

The History Behind ‘La Fée Verte’ 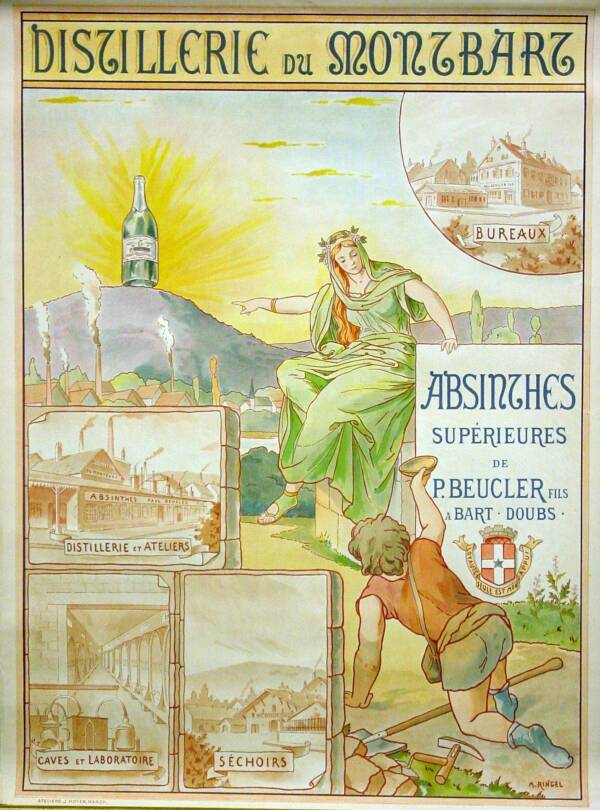 Wikimedia CommonsA poster advertising a distillery with “superior absinthe.” Circa 1849-1916.

Originating in Switzerland, absinthe’s birthplace is Val-de-Travers, a region in Neuchâtel that borders France. As one might expect, this beverage had very strong links to both Switzerland and France from the start.

Believed to have been created during the 18th century, some credit the first recipe to a French doctor named Pierre Ordinaire, who was living in Switzerland at the time. However, others credit the recipe to someone named Mère Henriod. Initially, it seemed like the first versions of absinthe were meant to treat a variety of illnesses.

But this wasn’t the first time wormwood had been used in a medicinal way. In fact, the name absinthe comes from the Greek word absinthion. That’s because the ancient Greeks used absinthion (wormwood soaked in wine or spirits) as a medicine to treat menstrual cramps, jaundice, anemia, and rheumatism. It was also used to aid childbirth. 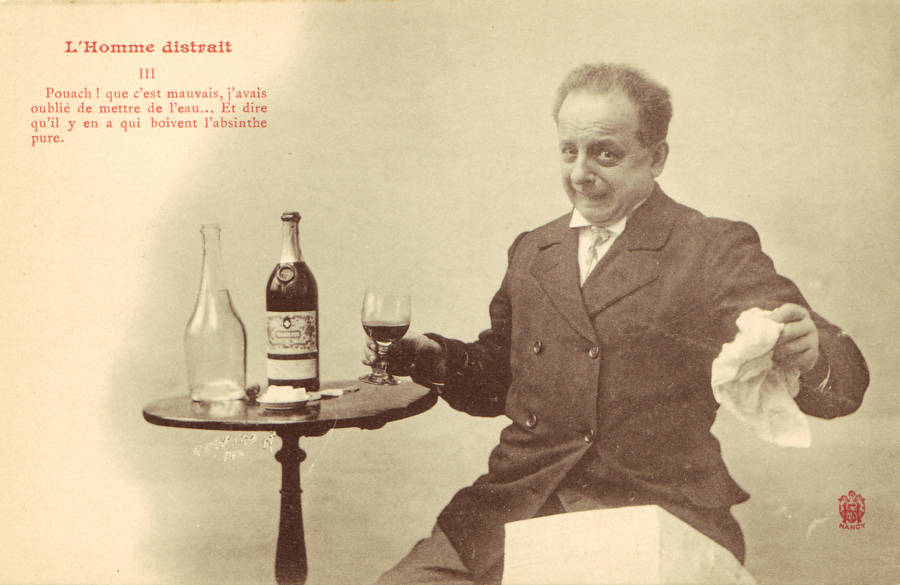 Adam Berry/Getty ImagesThe man in this absinthe poster says, “I forgot to add water! And to think some people drink it pure.”

This practice continued throughout the subsequent centuries, as wormwood was often used to treat stomach problems. Sometimes, it was even used to ward off the bubonic plague.

By the 1830s, French soldiers in Algeria used wormwood as medicine as well. They drank it to cool fevers and prevent dysentery. But they mixed their medicine with a little wine to help it go down smoothly. And thus, absinthe as a casual beverage was born.

Absinthe was first introduced to France in a more playful form around 1840. And before long, the drink began to soar in popularity.

Soldiers brought back the booze to mainland France where l’heure verte (green hour) quickly became a treasured time of day. The boozy beverage was powerful. And French people realized that they could get more bang for their buck (or, franc) by drinking absinthe instead of something weaker. But because it was so strong, most people mixed it with water. 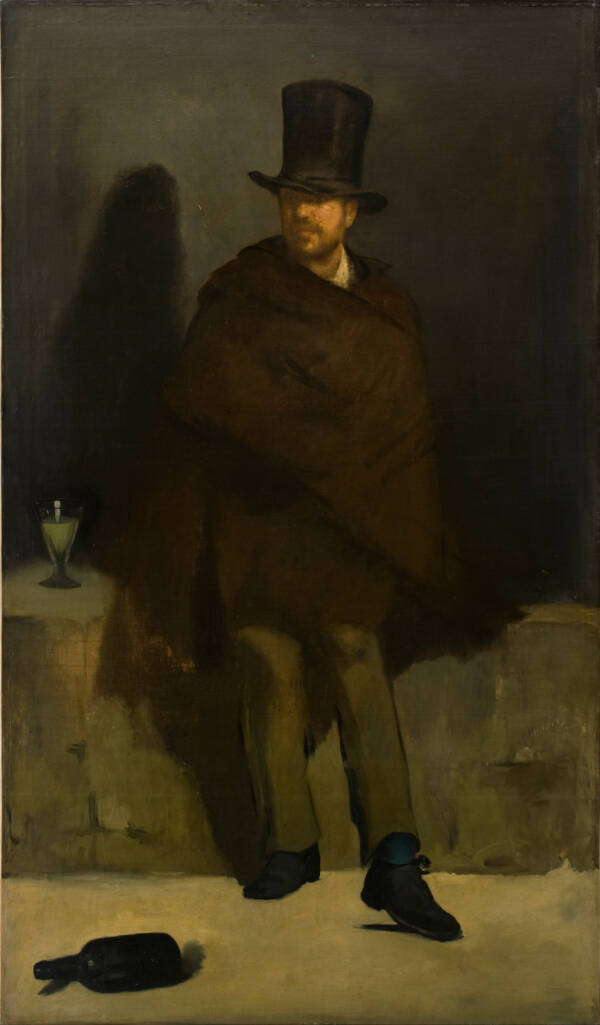 Wikimedia CommonsManet’s painting The Absinthe Drinker was rejected from the 1859 Salon of Paris, leading the artist’s mentor to note: “You are the absinthe drinker. It is you who have lost your moral faculty.”

While absinthe was popular among all social classes, it was especially beloved among artistic people. In 1859, Édouard Manet painted The Absinthe Drinker, one of his first major works.

Years later, Ernest Hemingway became a convert, noting: “[Absinthe is] supposed to rot your brain out, but I don’t believe it. It only changes the ideas.” He even invented an absinthe cocktail, Death In The Afternoon (named after one of his books), which mixes absinthe and champagne.

The artists might have loved absinthe. But by the end of the 19th century, the general population suspected that the drink did more harm than good.

How Absinthe Became The Target Of Teetotalers

The tide had been turning against absinthe for decades. Some in France saw it as the ultimate evil — the cause of societal decline — and claimed the drink was the “poisoning of the population.” Rumors about the drink’s hallucinogenic properties certainly didn’t help.

But the spirit didn’t truly sink in popularity until a Swiss man, under the influence of absinthe, murdered his entire family in 1905.

Please tell me I haven’t done this,” cried Jean Lanfray, who claimed that he had no memory of the incident. “I loved my family and children so much!”

Lanfray had consumed more than absinthe that day — he’d also downed several glasses of wine and a cup of coffee with brandy.

But it didn’t matter. The press called the killings “the absinthe murder.” The mayor of Lanfray’s small Swiss town declared that absinthe “is the principal cause of a series of bloody crimes in our country.”

Soon the drink was banned across Europe and in America — largely due to the contemporary temperance movement. One temperance petition in 1907 specifically called attention to the “evils” of absinthe. It read:

“Absinthe makes you crazy and criminal, provokes epilepsy and tuberculosis, and has killed thousands of French people. It makes a ferocious beast of man, a martyr of woman, and a degenerate of the infant, it disorganizes and ruins the family and menaces the future of the country.”

But decades later, the drink began to creep back into popularity across Europe — with a major revival beginning in the 1990s. And then, in 2005, about 100 years after Lanfray had killed his family, Switzerland reversed its absinthe ban. It was one of the last countries to do so.

Interestingly, the United States didn’t lift its absinthe ban until 2007. 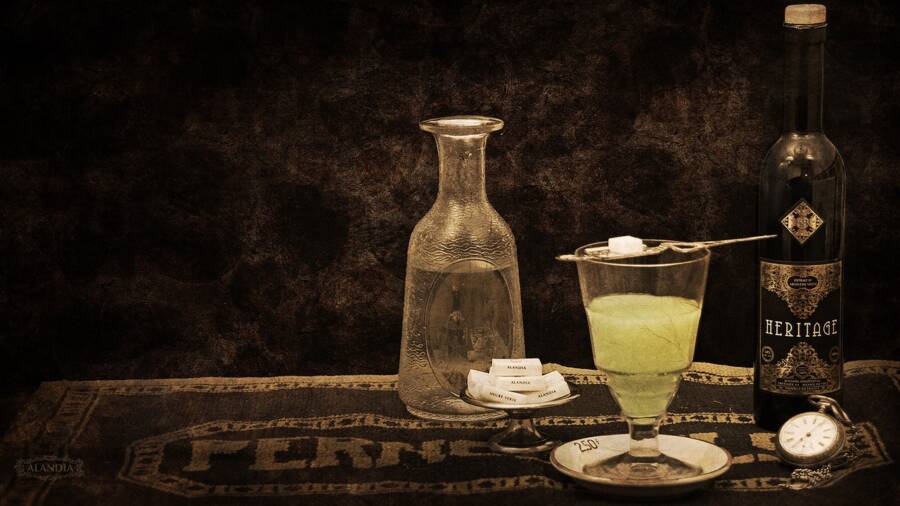 PixabayBans on absinthe have been lifted around the world.

Today, absinthe is regularly consumed around the world. But it took nearly 100 years for most of Europe — and the United States — to give absinthe the green light again.

Most of the European Union agreed to legalize the drink in 1988. But there was one significant holdout — France, where the spirit had become popular in the first place. France allowed the sale of the drink, but only if merchants called it a “wormwood-based spirit.” And France did not roll back its prohibition until 2011.

“I will not be seen as a drug addict anymore,” said Clement Arnoux, an absinthe enthusiast, when the ban was dropped. “It changes everything from the point of view of my friends and family.”

These days, Americans can also indulge in La Fée Verte. However, absinthe sold in the United States must adhere to certain regulations. The drink must contain less than 10 parts per million of thujone. And labels must not suggest that the drink has any hallucinogenic properties.

The green fairy still flies today. And plenty of thirsty drinkers remain willing to be caught under her spell.