Amateur photographer Aaron McLamb captured an iconic photo of Ladder 118 as it crossed the Brooklyn Bridge — not knowing that it would be the fire truck's last run.

On September 11, 2001, Aaron McLamb had just arrived at his workplace near the Brooklyn Bridge when the first airplane crashed into the North Tower of the World Trade Center.

Eighteen minutes later, he watched in shock from his 10th-floor window as the second plane tore into the South Tower. The 20-year-old ran for his camera to capture a devastating moment in American history. 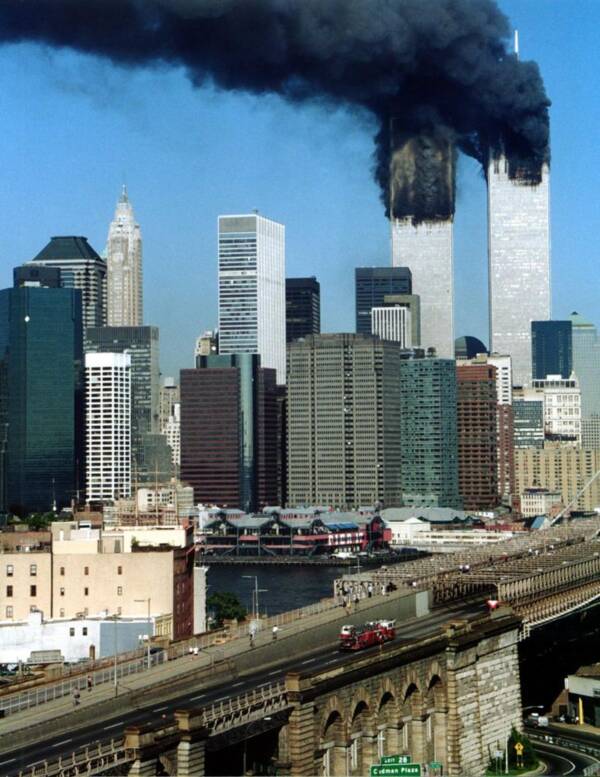 “It was almost surreal being that high up looking at everything going on down below,” he told New York Daily News. “You couldn’t hear the crackling of the fire or the creaking of the buildings. The only thing we could hear were the sirens from the fire trucks going across the bridge.”

He then snapped an unforgettable photograph of the Ladder 118 fire truck speeding to its death, with the Twin Towers smoking in the background. 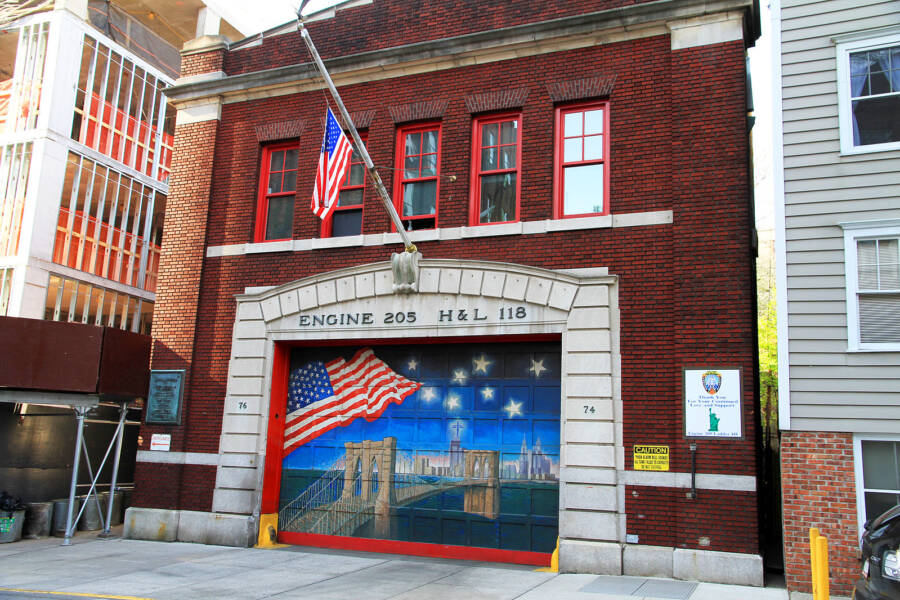 Wikimedia CommonsThe firehouse on Middagh St., where the Ladder 118 team was stationed on Sept. 11, 2001.

On that Tuesday morning, firefighters were stationed at the Middagh St. firehouse, ready for action. Moments after the second plane crash, the call of catastrophe came. Firefighters Vernon Cherry, Leon Smith, Joey Agnello, Robert Regan, Pete Vega, and Scott Davidson jumped into the Ladder 118 fire truck and were on their way.

Vernon Cherry had been planning to retire at the end of the year. The 49-year-old had worked as a firefighter for nearly 30 years and had made a name for himself during that time. Not only was he one of few black firefighters in New York in 2001, he was also a talented singer.

Another man breaking racial barriers on the team, Leon Smith was a proud member of the Vulcan Society, an organization for black firefighters. He had always wanted to help people, and had been with the FDNY since 1982.

Joseph Agnello was looking forward to celebrating his upcoming 36th birthday when Ladder 118 got the call on 9/11. He was a proud father with two young sons.

Lt. Robert “Bobby” Regan was also a family man. He had started his career as a civil engineer but joined the FDNY when his daughter was born in order to spend more time with her.

Like his lieutenant, Pete Vega didn’t start as a firefighter. Instead, he had spent six years in the U.S. Air Force, serving at Desert Storm before being honorably discharged. He became a firefighter in 1995, and in 2001 he had just completed a B.A. in Liberal Arts from the City College of New York.

Scott Davidson — the father of Saturday Night Live star Pete Davidson — began his firefighting career just a year before Vega. He was known for his humor, his heart of gold, and his love of Christmas. 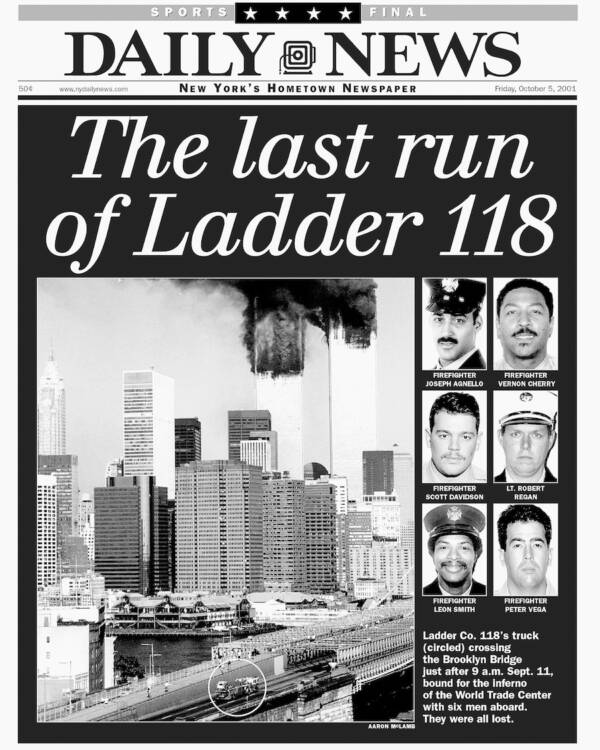 At the same time that the Ladder 118 team was speeding toward flames, Aaron McLamb was pausing his work at a Jehovah’s Witness facility — where he printed Bibles — to watch smoke spreading across the city.

“At that point, we understood that it was some sort of intentional act,” McLamb said. “The big ‘t’ word (terrorism) was not on everybody’s lips then but it was understood that something deliberate just happened.” 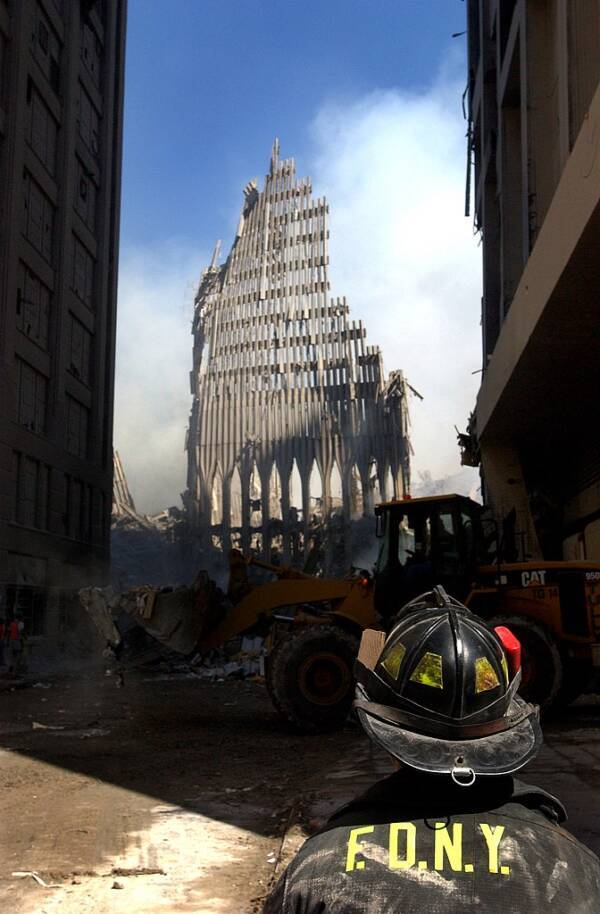 Wikimedia CommonsThe terrible attacks on the Twin Towers, from a firefighter’s perspective.

The young man had grown up wanting to be a fireman, often stopping by the Middagh St. firehouse to admire the trucks, so he was waiting for the rig to make its way across the bridge.

As it dashed past, he managed to capture the glint of red before it reached the city. Little did he know that this photo would come to represent the sacrifice of hundreds of first responders during the 9/11 attacks.

How Ladder 118 Met Its Fate 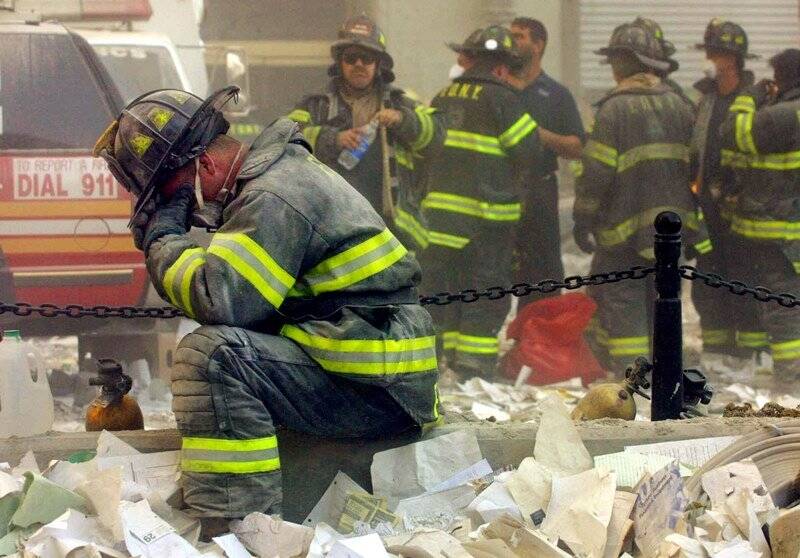 Mario Tama/Getty ImagesA firefighter breaks down at the scene of the fallen towers.

Without knowing it, McLamb had forever memorialized this team’s final run. None of the six firefighters on Ladder 118 made it out of the rubble that day.

Bobby Graff, a mechanic at the hotel, was quoted saying: “They knew what was going on, and they went down with their ship. They weren’t going to leave until everyone got out. They must have saved a couple hundred people that day. I know they saved my life.” 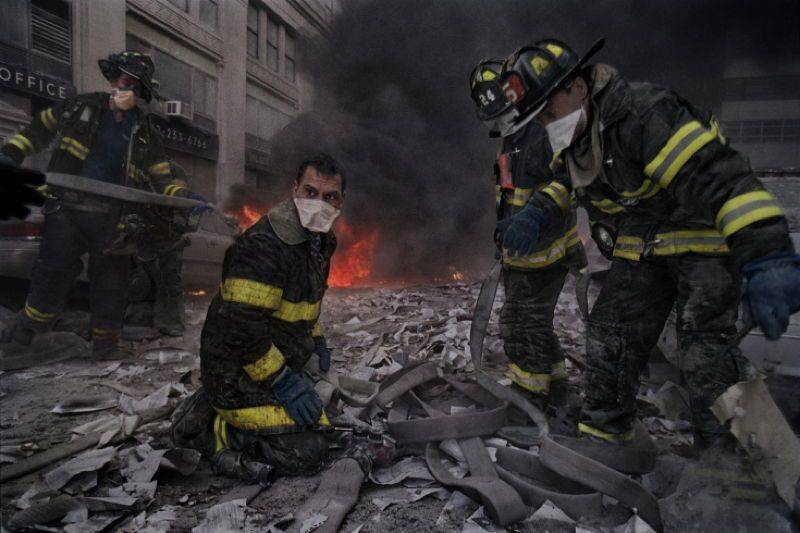 Getty Images343 firefighters died during the 9/11 attacks, including the six men from Ladder 118.

Ultimately, over 900 guests were saved that day. However, when the Twin Towers finally collapsed, the hotel went down with them. So did hundreds of firefighters, including the six members on Ladder 118.

All but one of their bodies were discovered months later, some lying only a few feet apart from one another. Because of this, Agnello, Vega, and Cherry were buried in adjacent plots in Brooklyn’s Green-Wood Cemetery.

As Joey Agnello’s wife said, “They were found side by side, and they should stay side by side.”

The Legacy of the Fallen Heroes 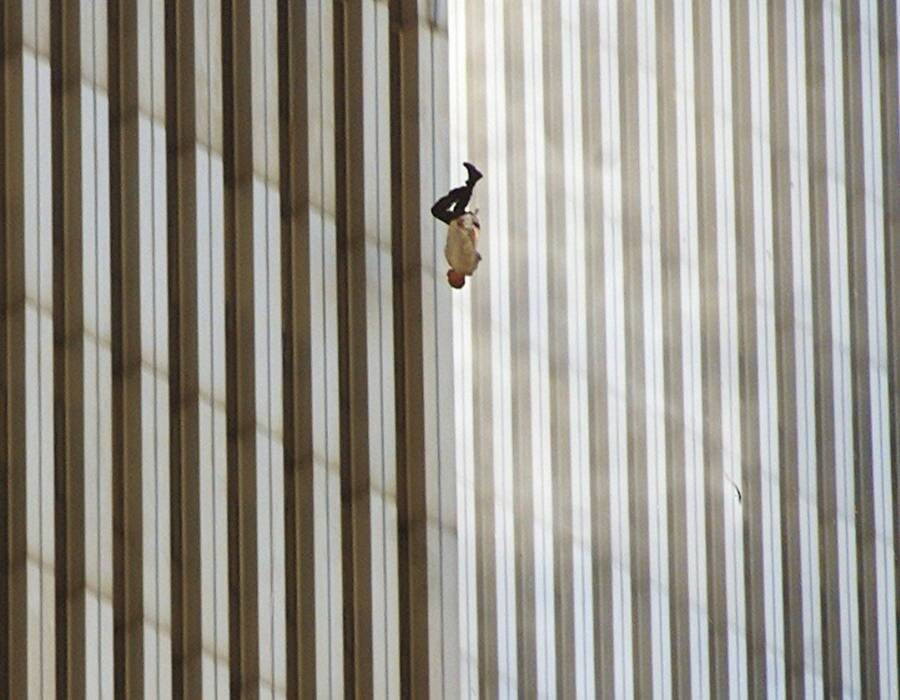 Richard DrewAnother famous photograph from the 9/11 attacks shows a man falling from one of the towers.

A week after the attacks, McLamb brought a stack of his developed photos from that day to the firehouse. The remaining firefighters at the Brooklyn Heights location recognized the trademarks of Ladder 118.

“Once we realized it was ours, it sent chills down your spine,” said retired firefighter John Sorrentino in an interview with New York Daily News.

McLamb gave his photo to the New York Daily News, and days later it was plastered across the front page.

Like other famous photos from the terror attack on 9/11, the picture of the doomed fire truck now represents the patriotism and tragedy of that September day.

“They say a picture is worth a thousand words,” said Sorrentino. “I don’t think there’s any word that describes that picture.”

While many people have struggled with survivor’s guilt after the attacks, Aaron McLamb being one of them, those who knew the Ladder 118 team have found a way to remember them.

At their old firehouse, the duty board has remained untouched since that September morning, the names of the six men still written in chalk next to their assignments.

Their portraits have also been hung, alongside Robert Wallace and Martin Egan, two other firefighters from that firehouse who were killed that day.

Saturday Night Live star Pete Davidson, who was only seven years old when his father Scott Davidson died, has a tattoo of his dad’s badge number, 8418.

Now that you know the story behind the 9/11 photo of Ladder 118, check out more photos that reveal the tragedy of September 11, 2001. Then read about how 9/11 is still claiming victims, years after the attacks.