The Biggest History News Stories Of 2019, From Tut’s Tomb To The Knights Templar

Whether it was archaeology, ancient monuments, or extinct animals, history news and discoveries ranked with the most fascinating stories of 2019. 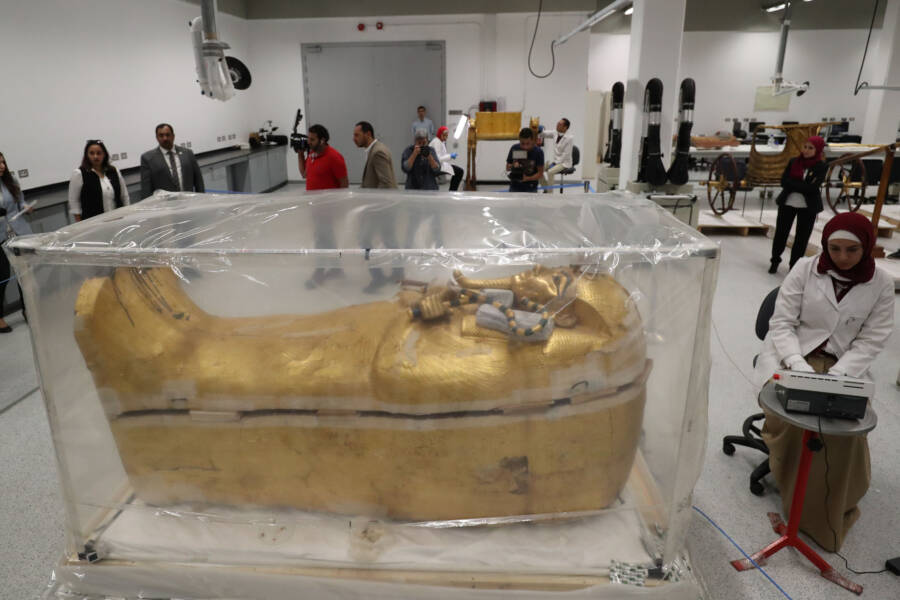 Khaled Desouki/AFP/Getty ImagesIn 2019, the gilded coffin of King Tutankhamun was removed from his tomb for the first time in 3,300 years. It was in desperate need of restoration.

The year 2019 has seen some of the most exciting historical discoveries in a long time, owing to recent technological advancements.

From the shocking reconstructed face of a Viking warrior who lived 1,000 years ago to the terrifying discovery of Hitler’s plans for a North American Holocaust, these are the most incredible history news stories of 2019.

Scientists Explored The H.M.S. Terror Shipwreck — 174 Years After It Sank To The Arctic Floor

For the first time since the ship’s mysterious disappearance 174 years ago, scientists from the Parks Canada used underwater drones to explore the wreckage of the H.M.S. Terror.

The ship carried Sir John Franklin and his crew on an ambitious expedition to locate the mysterious Northwest Passage, but disappeared months after it departed from England. Another ship that was supposed to sail alongside it, the Erebus, also went missing.

A total of 129 men boarded the state-of-the-art vessels only to never be seen again. Graves and human remains from the shipwrecks that have been discovered over the years paint a grisly picture of poisoning, malnutrition, and cannibalism during the ships’ last days.

Skeletal remains of the crew were cracked in half, a sign that Franklin’s men had eaten each other before dying from the elements, and an autopsy of a crew member John Torrington — his corpse remarkably well-preserved in the Arctic ice — suggested he was extremely malnourished before he died.

They also found lead in his system, which came from the crew’s poorly canned food supply. It’s likely that he and others were killed by lead poisoning and not starvation.

But one mystery remains: How did these modern ships tank in the first place?

“There’s no obvious reason for Terror to have sunk,” archaeologist Ryan Harris declared. “It wasn’t crushed by ice, and there’s no breach in the hull. Yet it appears to have sunk swiftly and suddenly and settled gently to the bottom. What happened?”

Nevertheless, the joint dive conducted by Parks Canada and Inuit captured a treasure trove of well-preserved artifacts from the Terror’s wreckage, likely due to the ship’s cold and dark environment sealed with sediment.