Not only is this the largest blue whale fossil ever uncovered, but it also indicates that the species lived 1.5 million years earlier than we thought. 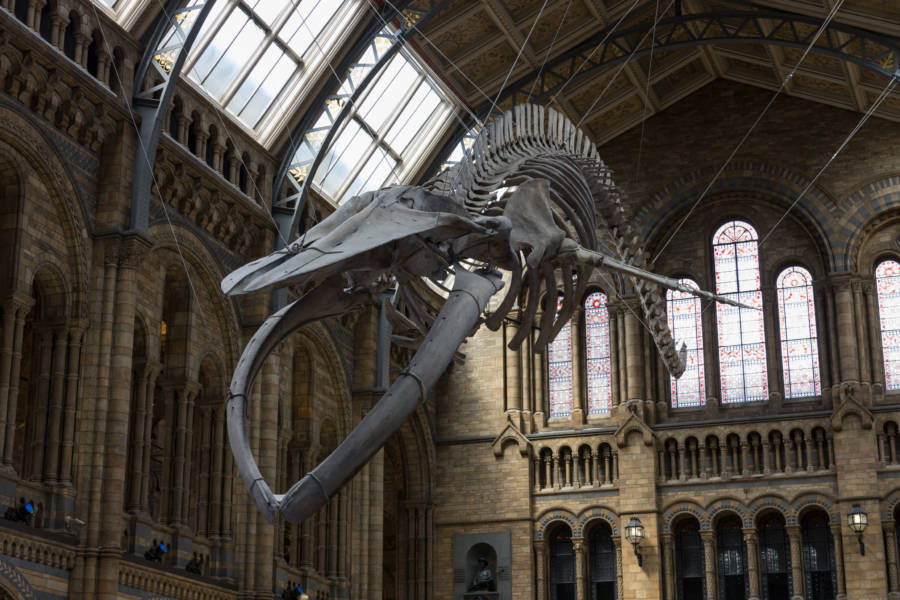 Scientists have long known that the blue whale is the largest animal that has ever lived. What hasn’t been known until now, however, is that the ocean giant roamed the planet far earlier than previously established — 1.5 million years ago, during the early Pleistocene. And we now know this thanks to the largest ancient blue whale fossil ever found.

According to National Geographic, the 85-foot-long specimen is now officially the largest on record. Though its size falls short of modern-day blue whales by 15 feet, the find has more consequential ramifications to consider.

Published in the journal Biology Letters, the research described an impressively large skull and suggests the fossil’s age has forced evolutionary biologists to reassess the entire species’ historical timeline.

“The fact that such a large whale existed that long ago suggests that large whales had been around for quite a while,” said study co-author Felix Marx, a paleontologist at the Royal Belgian Institute of Natural Sciences in Brussels. “I don’t think species can evolve to such a size overnight.” 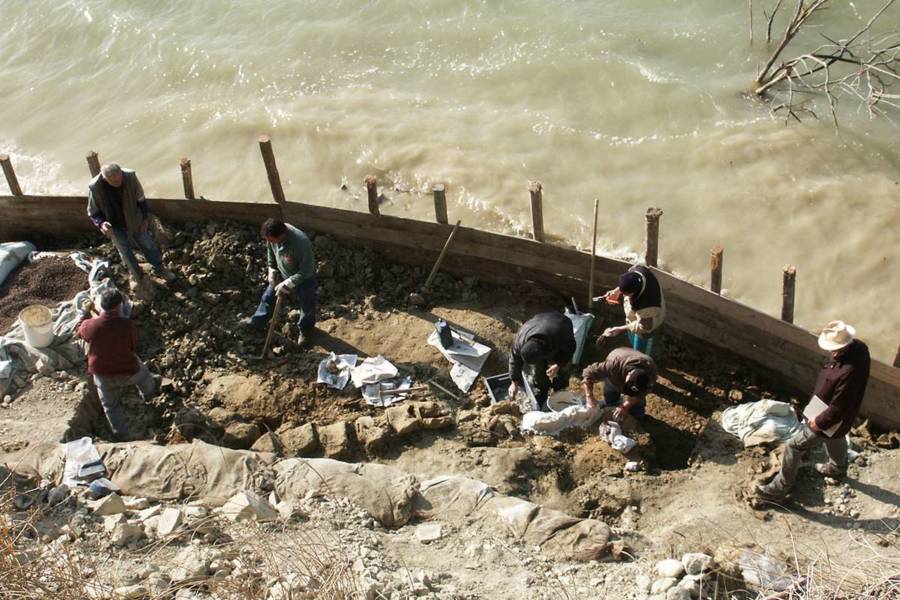 Finding whale fossils that are older than 2.5 million years is extremely rare, making it just as difficult to establish just what made blue whales into the behemoths they are. With numerous ice ages freezing parts of the world’s oceans and lowering sea levels during this timeframe, the remains of whales that died are likely relegated to dozens of feet below sea level.

As for this particular 85-footer, the fossil was essentially stumbled upon in 2006 by a southern Italian farmer near Matera. When he noticed some large vertebrae protruding from a lake he used to irrigate his fields, he made sure to let an interested party know. 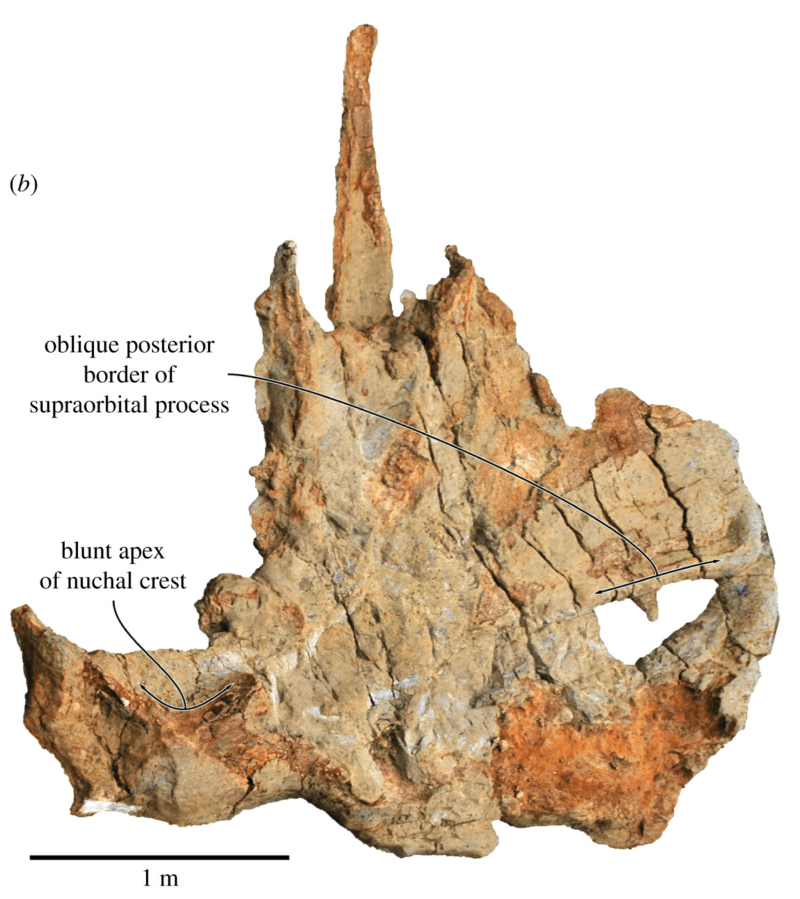 It took three fall seasons to successfully lower the lake’s water level without jeopardizing the farmer’s harvest. In the end, it was paleontologist Giovanni Bianucci of the University of Pisa who managed to claim this historical prize.

When Bianucci and his team recovered the colossal remains, they correctly assumed they belonged to a blue whale. Of course, they didn’t yet know just how old these bones really were, but their discovery has shed new light on how gradual the species’ growth has actually been across millennia.

The new fossil might also help reveal that the rise of giant whales has been more gradual than previously believed, argues Marx.

A 2017 study analyzing the size of all known baleen whale species — many of which are only known from fossils — indicated that the increase in whales’ sizes occurred rapidly, about 300,000 years ago.

This 85-footer, however, is far older than that — and doesn’t fit into the established timeframe. Its mere inclusion in the 2017 data set means “the most probable date (of gradual whale-size increases) was pushed back to 3.6 million years, and likely even further, possibly as far back as six million years.” 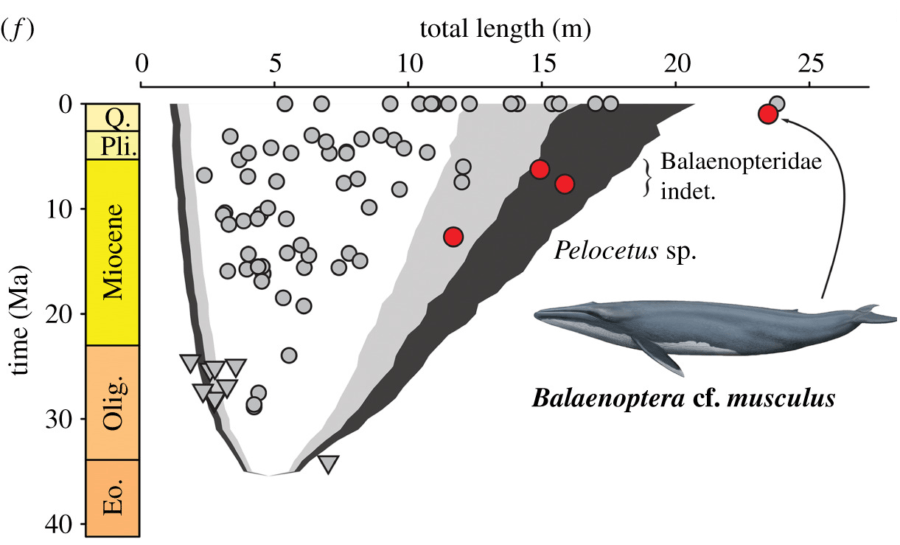 Biology LettersThe varying body lengths of ancient blue whale fossils over time with the Matera whale represented by the red dot at the right.

Marx is currently hard at work on a project in Peru, where numerous whale fossils have been found though not yet recovered. Once more, including their relative sizes into the above algorithm only confirms Marx’s theory that whale size increases were far more gradual than previously posited.

“I’m aware of multiple large whales of at least the same age that haven’t been described yet,” he said.

For paleontologist Cheng-Hsiu Tsai of National Taiwan University, Marx’s conclusions are in complete alignment with his own findings. Tsai discovered the remains of what is probably the second-largest fossilized whale ever found and has argued ever since that baleen whales grew bigger and more gradually.

“To be honest, this fossil does not surprise me at all,” he said. “I expect that we should find something bigger and geologically even older soon.”

Next, read about the disturbing blue whale challenge. Then, learn about the bizarre whale/dolphin hybrid known as the wholphin.