How Larry Thorne went from Nazi to U.S. Army hero while building one of the most famed legacies in the history of modern warfare. 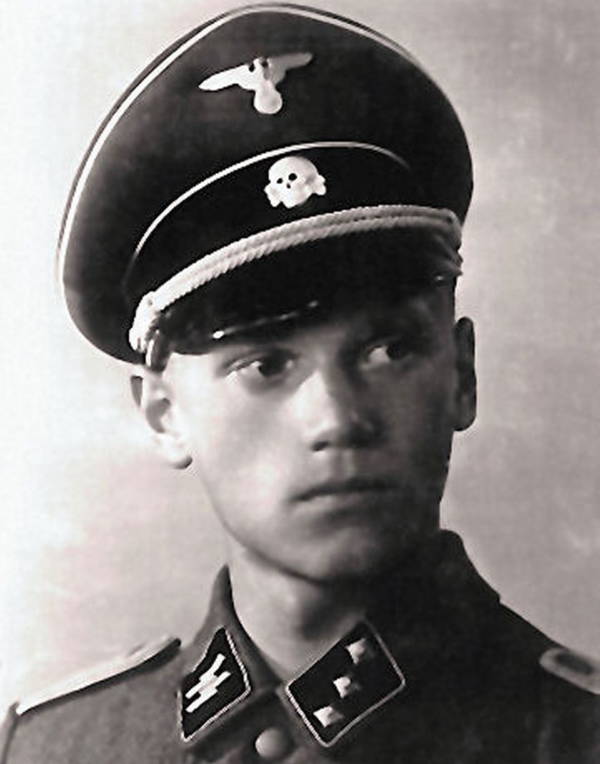 In Section 60 at Arlington National Cemetery among the thousands of rows of white granite headstones for American soldiers killed in action stands a marker bearing the names of four servicemen killed in Vietnam. At first glance, there’s nothing remarkable about the stone, one so similar to the countless others at this hallowed ground.

Even the name at the top of the headstone – Major Larry Allan Thorne – is not unusual. It sounds quintessentially American, especially when compared to the names of the three South Vietnamese soldiers who are buried with him in this collective grave.

However, Larry Thorne was not this man’s given name. The deceased, though a legendary U.S. Green Beret of incredible courage and fierceness, was actually Finnish.

Larry Thorne was born Lauri Allan Törni in Finland’s Viipuri Province in 1919 and fought for his homeland against the invading Soviets during the Winter War and Continuation War at the outset of World War II. Because the Continuation War was a joint effort between Finland and Nazi Germany against the Soviet Union, Törni trained with the Nazi SS where he was recognized as a lieutenant.

But after the war ended, Törni emigrated to the United States, where he joined the Army and eventually became a Green Beret — making him the only former Waffen-SS officer to be buried in Arlington National Cemetery.

Even setting that aside, the story of Lauri Törni/Larry Thorne is a remarkable one. From birth, it seems as though he was destined to be a warrior. He joined the Finnish Army as a teenager in 1938 and fought off the Soviet invasion in the Winter War (1939-1940) and the Continuation War (1941-1944), rising to the rank of captain and earning the Mannerheim Cross, Finland’s equivalent of the Medal of Honor.

In between the Winter War and the Continuation War, Törni trained with the Nazi SS in Austria.

Throughout, Törni was an effective guerilla fighter of such skill that the Soviets put a bounty on his head because of the casualties that his unit inflicted upon them. There is reportedly no record of the Soviets providing a bounty for any other Finnish soldier. The bounty was worth about $650,000 and, apparently, no one ever tried to collect.

All the while, Törni was tasked with leading elite ski units on dangerous missions behind Soviet lines. And while Törni was building this fearsome reputation, one of his soldiers was Mauno Koivisto, who would later become president of Finland. Koivisto once said:

“Thorne, as a leader, was liked. In many ways he emphasized that we were all the same bunch, and he bore his share just like the others… He did not ask anyone to do something he did not do himself. He carried his own load, marched at the lead, and was one of us.” 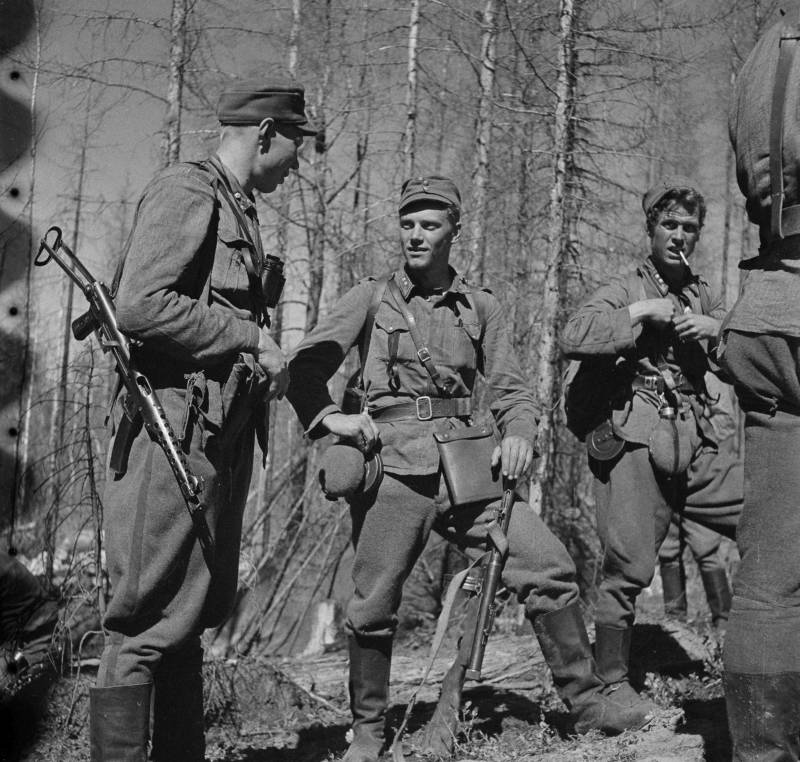 Later, after the Continuation War ended but the larger conflict of World War II was still raging, Törni sought to keep on fighting the Soviets. And while Finland had ceased Continuation War hostilities with the Soviets after coming to a territorial agreement, Nazi Germany was still at war with the Red Army. So, Törni joined with the Germans again in 1945 before being captured by Allied forces as the war was coming to an end.

They placed him in a POW camp, but Törni, true to form, escaped and made it back to Finland.

After World War II, he eventually made his way to the United States, changed his name to Larry Thorne and joined the U.S. Army in 1954, thanks to the Lodge-Philbin Act that permitted the recruitment of foreign nationals into the U.S. Armed Forces.

The newly christened Larry Thorne was befriended by Finnish-American officers who recognized his abilities and directed him to the Special Forces. There he became an instructor and taught skiing, survival, mountaineering, and guerrilla tactics.

Eventually, he attended airborne school and earned his silver wings as a Green Beret. He also went through Officer Candidate School and was commissioned as a first lieutenant where he rose from recruit to officer in just three years before being promoted to captain.

As a Green Beret captain, Thorne was known as one of the toughest officers. He was extremely fit and often physically outperformed soldiers half his age. During one evaluation, a commanding officer once wrote: “I have not known any officer in his grade to whom he can be compared. He is over forty years old, but has the physical ability of a person of twenty-five.”

Still in fighting form in his mid-40s, Thorne served with the 10th Special Forces Group in West Germany as part of a search-and-rescue unit. He earned a reputation for fearlessness in leading operations to recover bodies and classified documents from a crashed airplane in the Zagros Mountains of Iran.

In November 1963, Thorne was sent to Vietnam. He served two tours and earned a Bronze Star for valor and two Purple Hearts. He continued to build his reputation for bravery by taking on difficult assignments and leading his men with courage and distinction during several tough operations.

For example, during his final tour as part of the 5th Special Forces Group, Thorne was leading a covert mission against a Viet Cong stronghold in Laos on Oct. 18, 1965. He was flying in a South Vietnamese Air Force H-34 helicopter when the weather turned bad. Caught in heavy fog and rain, Thorne would not order his chopper to leave out of concern for the men on the ground that his chopper crew was supporting.

This is exactly the kind of courage and leadership for which Larry Thorne was known — but this was also his final mission. The weather grew so bad that the chopper crashed into a mountainside and all on board were killed. 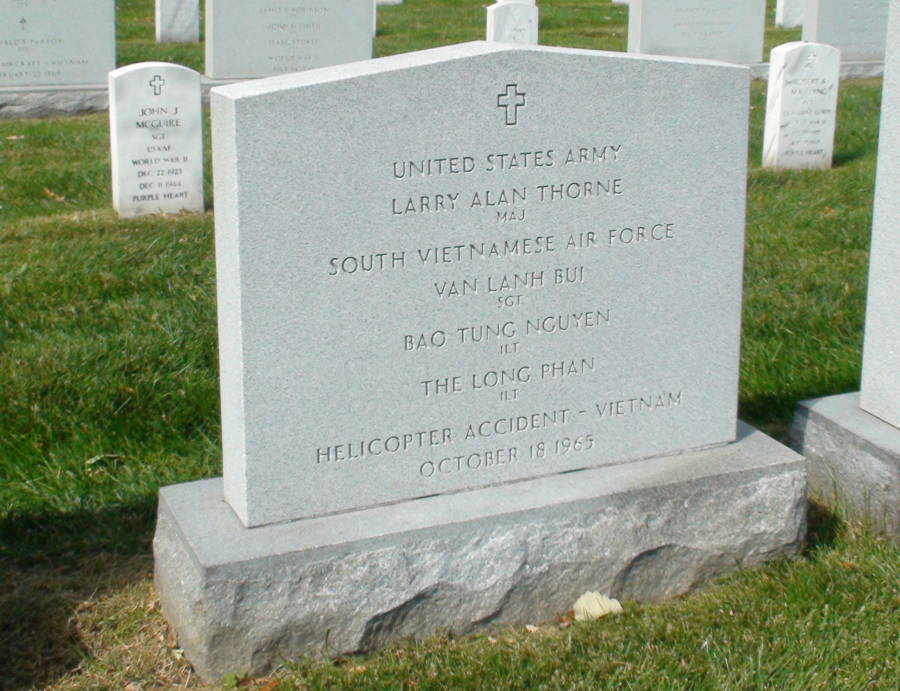 Thorne was 46 years old and had just been approved for promotion to major. He received that rank posthumously and was awarded the Legion of Merit and Distinguished Flying Cross.

His remains were not located until 1999. Even then, military authorities were not sure it was him. He was eventually identified by his dental records and his remains were interred at Arlington National Cemetery on June 26, 2003 with full military honors.

Thorne’s remains were intermingled with those of the three South Vietnamese Army soldiers who were with him on the chopper. They were all buried at Arlington under a single headstone that bears the names of Larry Thorne and the three other men: Lieutenant Bao Tung Nguyen, First Lieutenant The Long Phan, and Sergeant Vam Lanh Bui.

Beyond his burial at Arlington, the accolades for Thorne’s heroics and bravery continued well after his death. Col. Charles M Simpson III, one of Thorne’s commanding officers, wrote that he would “…fight to serve with him again under similar conditions, particularly in combat requiring great maturity, perseverance, physical and moral courage, and personal leadership.”

Similarly, Lt. Col. George Viney, deputy commander of the Special Forces in Vietnam, wrote that Larry Thorne is “…the type of person you like to have around in a fight for he has unlimited courage.”

It’s not every day that you’ll hear an American officer say such things about a man who once wore the uniform of the Nazi SS.

After this look at Larry Thorne, see some of the most powerful images captured during the Winter War. Then, read up on Winter War hero Simo Hayha, the “White Death” and the man who may have been the deadliest sniper in history.