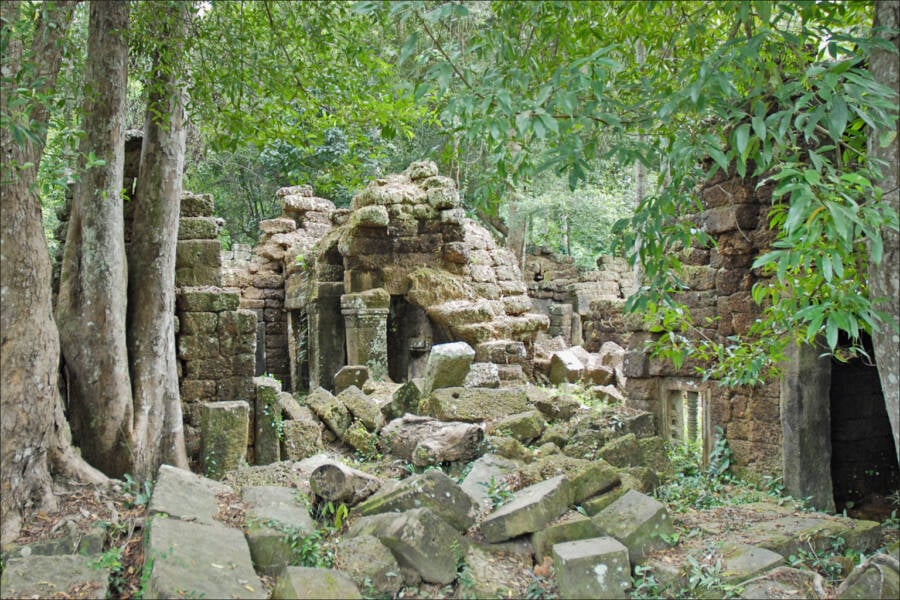 Jean-Pierre Dalbéra/FlickrThe ruins of an ancient temple, built when the Khmer Empire ruled modern day Cambodia, sits near Phnom Kulen, the early seat of the empire.

Sometime between the 9th and 15th Centuries AD, a Hindu-Buddhist regime known as the Khmer Empire ruled over what is now modern-day Cambodia. It’s early capital city, Mahendraparvata, has been shrouded with thick vegetation since the empire’s fall and was thought lost to history — until now.

Recently, an international team of archaeologists successfully uncovered the complete breadth of the ancient city thanks to aerial surveys equipped with laser-scanning technology — or LIDAR — around the Phnom Kulen mountain, long suspected as the early seat of this ancient empire.

The study, published in the journal Antiquity, details how the ancient capital utilized advanced engineering and technology to develop its water-management infrastructure and urban-grid design.

As Gizmodo reports, researchers used the aerial LIDAR to map the archaeological features hidden underneath Cambodia’s dense jungle, making them visible by the changes in the LIDAR’s measurement of the distance between it and the “ground” below. The LIDAR survey was performed on two separate occasions in 2012 and 2015, respectively.

Incredibly, scans from the LIDAR survey produced a high-resolution 3D map of the city blanketed by thick vegetation. The archaeological markers detected on the 3D map — such as mounds, walls, roads, and canals — were later confirmed by researchers working on the ground.

“Although we found little evidence for the type of mound-and-pond-based habitation patterns typical of Angkorian urbanism,” wrote the authors of the study, “we nonetheless identified a distinctive topographic spatial patterning associated with the main axes—and in particular with the central grid—that we interpret as evidence for habitation.” 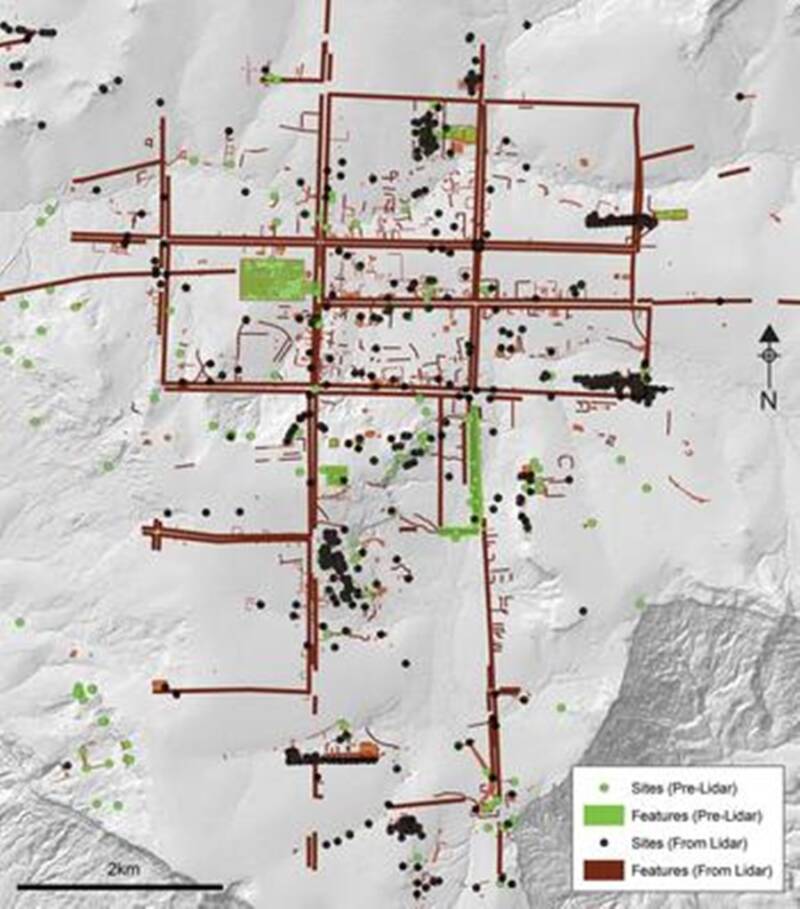 Researchers in the past were only able to locate a scattering of small temples and shrines around the Phnom Kulen mountain range.

Besides the thick vegetation surrounding the ancient habitat, landmines and explosive ordnances leftover from the Khmer Rouge guerillas who controlled the area until the 1990s also made the site a dangerous place for archaeologists.

The LIDAR scanning technology allowed researchers from the French Institute of Asian Studies and APSARA, the management authority for Angkor Archaeological Park, to safely and accurately unearth the ancient city’s expansive bounds which stretches 15 to 19 square miles in size.

According to the 3D map, Mahendraparvata had elevated embankments in its north-south and east-west areas and was made up of squared city grids indicative of a sprawling urban city.

Researchers also uncovered a vast territory of pyramid temples, a royal palace, ponds, mounds, and other relics similar to those found in other Khmer Empire cities.

Interestingly enough, even though the study’s findings show that Mahendraparvata boasted an impressive water-management system complete with a dam and an artificial reservoir, the reservoir itself was unfinished.

This means that the city didn’t last long because it could not support an irrigated system for the empire’s agriculture.

Researchers suspect that the Khmer Empire’s capital was later moved to Angkor instead, likely due to better conditions for their rice field’s flooded irrigation system.

“This would place the site among the first engineered landscapes of the era, offering key insights into the transition from the pre-Angkorian period, including innovations in urban planning, hydraulic engineering and sociopolitical organisation that would shape the course of the region’s history for the next 500 years,” the study noted.

The centralized square grids of the city, with buildings and temples among each square area, points to a highly-sophisticated urban design plan. 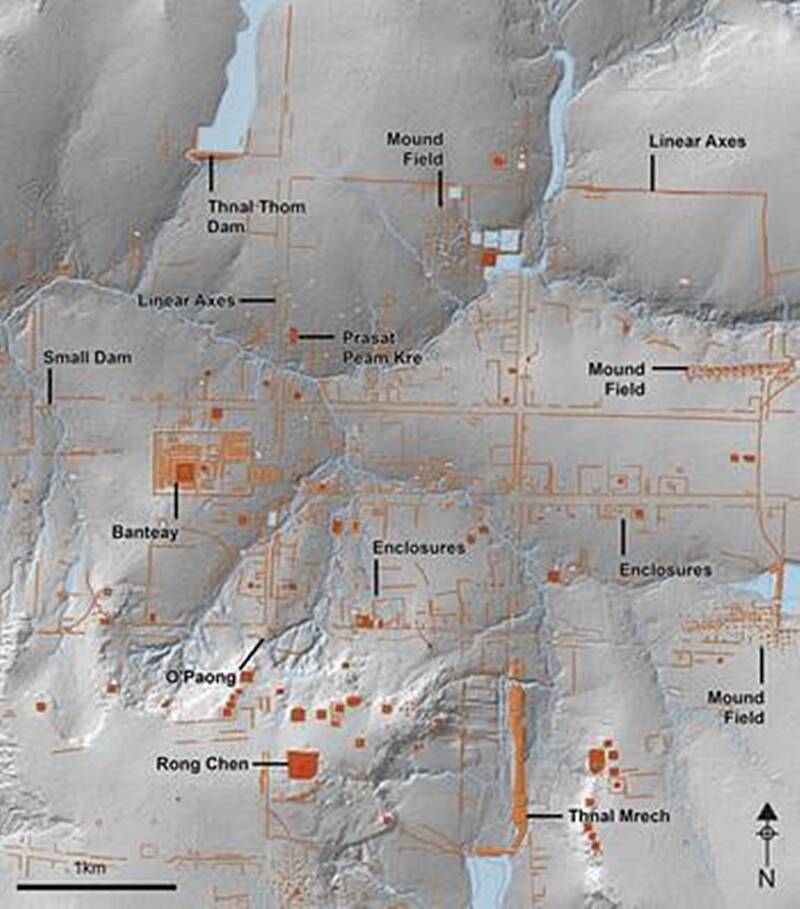 Jean-Baptiste Chevance et alMap of the central grid of Mahendraparvata on top of a lidar-derived hillshade model.

“It shows a degree of centralised control and planning,” Damian Evans, one of the paper’s co-authors, told New Scientist. Noting that other Khmer cities had grown organically: “What you’re seeing at Mahendraparvata is something else. It speaks of a grand vision and a fairly elaborate plan.”

Right now, it’s unclear when most of the archaeological relics of the city were built. Ancient inscriptions identify Jayavarman II as the Khmer Empire’s first ruler, and since historians believe he ruled beginning in 802 AD, it’s possible that he ordered the construction of Mahendraparvata.

Now that they know where it is and the extent of its borders, researchers have fresh mysteries to unravel about this ancient capital and expect to learn more about it as they collect and analyze more data from the site.

Next, explore the lost Mayan ‘Megalopolis’ uncovered in the jungles of Guatemala and learn the story behind the clay soldiers of the first Chinese emperor’s Terracotta Army.