Named after the 1950s sci-fi classic, this organism is challenging scientists to reassess what we know about biological intelligence. It's set to be unveiled to the public in Paris this weekend. 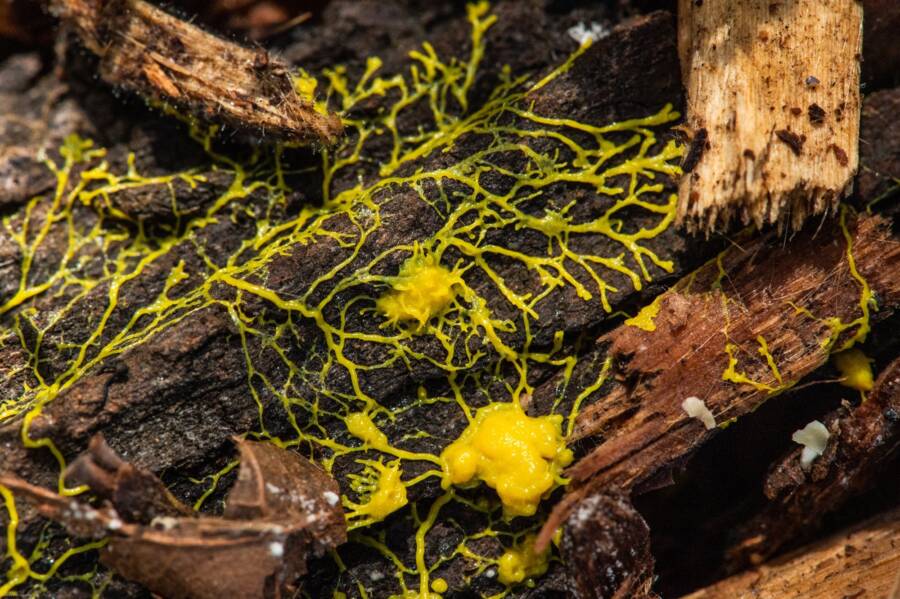 What has no mouth, no eyes, 720 sexes, and can detect food and digest it? If you miraculously guessed “the blob” (otherwise known as Physarum polycephalum), you’d be correct.

According to CNN, the Paris Zoological Park showcased the mysterious organism on Wednesday, in preparation of its public unveiling on Saturday. The so-called blob can move at a speed of 1.6 inches per hour, heal itself when dissected, and solve problems despite its lack of a brain.

The slime mold’s Latin monicker translates to “the many headed slime” — which its many sexes and ability to split apart and fuse back together certainly warrants.

The unusual unicellular organism is believed to be around one billion years old, though it was only discovered in May 1973 by a Texan who found it expanding in her backyard. While it was subsequently covered in The New York Times, its appeal died out rather quickly — until now.

“The blob is a living being which belongs to one of nature’s mysteries,” Bruno David, director of the Paris Museum of Natural History, told Reuters. “It surprises us because it has no brain but is able to learn…and if you merge two blobs, the one that has learned will transmit its knowledge to the other.”

AFP News Agency footage of the blob’s unveiling in Paris this week.

Named after the eponymous 1958 sci-fi horror classic in which Steve McQueen’s character fights an invading alien life form, the blob is neither a plant, animal, or a fungus.

New research published in the Proceedings of the Royal Society showed this species could ignore noxious substances and remember to avoid them up to a year later.

This type of intelligence was seen to extend into complex problem solving, such as finding the quickest way to an exit out of a labyrinth — and anticipating sudden changes in its environment. One odd quirk? According to footage published by the Zoological Park, oatmeal is its favorite food.

This type of slime mold is usually found on Europe’s forest floors, according to the Zoological Park’s Marlene Itan. Its only nemeses are essentially light and dryness.

“It thrives in temperatures oscillating between 19 and 25 degrees Celsius (66 to 77 degrees Fahrenheit) and when humidity levels reach 80% to 100%,” she said. “Acacia trees, oak bark, and chestnut bark are its favorite places.”

Scientists initially grew the being in Petri dishes, before grating it onto tree bark (which it eats). It’ll be displayed in a terrarium come Oct. 19, when visitors get to marvel at the blob for themselves.

But how exactly does this yellowish mold function? 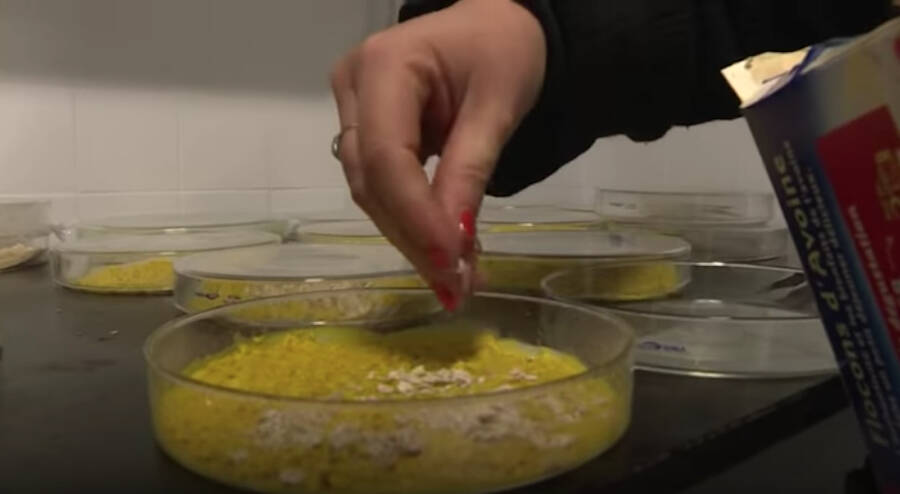 YouTube/AFP News AgencyWhile Acacia trees, oak bark and chestnut bark are the blob’s favorite places, oatmeal seems to be its favorite food. At least, that’s what scientists are feeding it for the time being.

According to Science Alert, this particular species is just one of 900 variants of slime molds.

For most of the time, P. polycephalum lives a solitary existence similar to since celled organisms like amoeba. It’s when they bond together that the species can more effectively cover several square feet to search an area for bacteria to digest.

That process, however, isn’t quite as simple and just huddling up together. The organism’s cells can only combine their genetic material if each blob has a compatible set of genes (called mat A, mat B, and mat C) — which each have up to 16 variations. 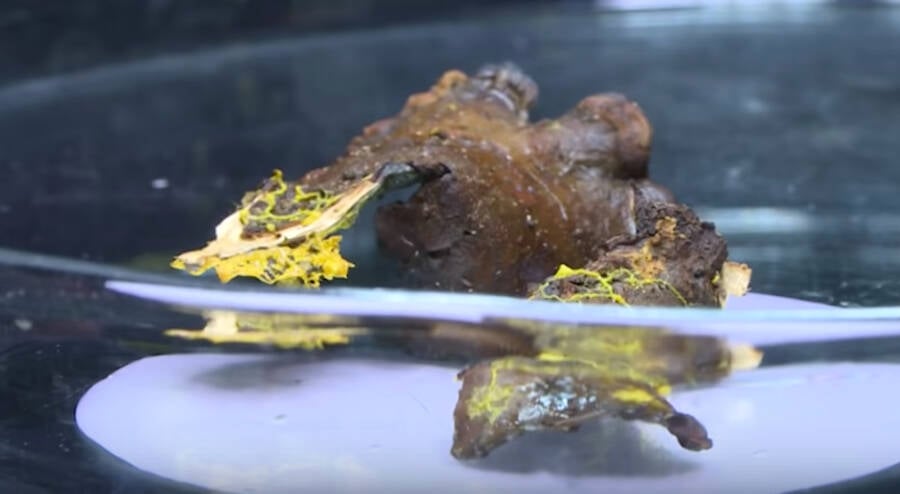 YouTube/AFP News AgencyThe scientists initially grow the blob in Petri dishes, before placing it onto tree bark, which it eats.

Most remarkable is that fact this type of slime mold is challenging the scientific community to reassess what it understands about biological intelligence. The organism’s slow movement with interconnected blobs isn’t random — its predetermined by algorithms within their biochemistry.

In that sense, this is far more than a mere variant of slime mold that’s been given a catchy name. This thing can move, learn, eat and digest food, and pass knowledge on to others — all without a brain. If you’re in Paris this week, you’d be wise to yours to give it a look.

After learning about the mysterious blob with 720 sexes and an ability to pass knowledge to its peers being unveiled in Paris this week, read about the killer fungus known as the cordyceps. Then, learn about the time scientists found the legendary sea blob after a century of searching.