The Forgotten Brilliance Of Laura Bassi, One Of History’s First Female Scientists

Nearly 200 years before Marie Curie won her Nobel Prize, Laura Bassi was born. Already a genius by age 13, Bassi grew up to be one of the greatest minds during the Age of Enlightenment.

Though relatively unknown today, Laura Bassi was an important figure during the Age of Enlightenment. As the first female physics professor at a European university and a member of a prestigious scientific academy, she is often considered one of the first professional female scientists.

Laura Bassi was born in 1711 in Bologna, Italy. Her mother was often sick, and the ever-present family doctor Gaetano Tacconi quickly noticed Bassi’s keen interest and studious mind. When she was about 13 years old, he asked her father’s permission to tutor her in philosophy. 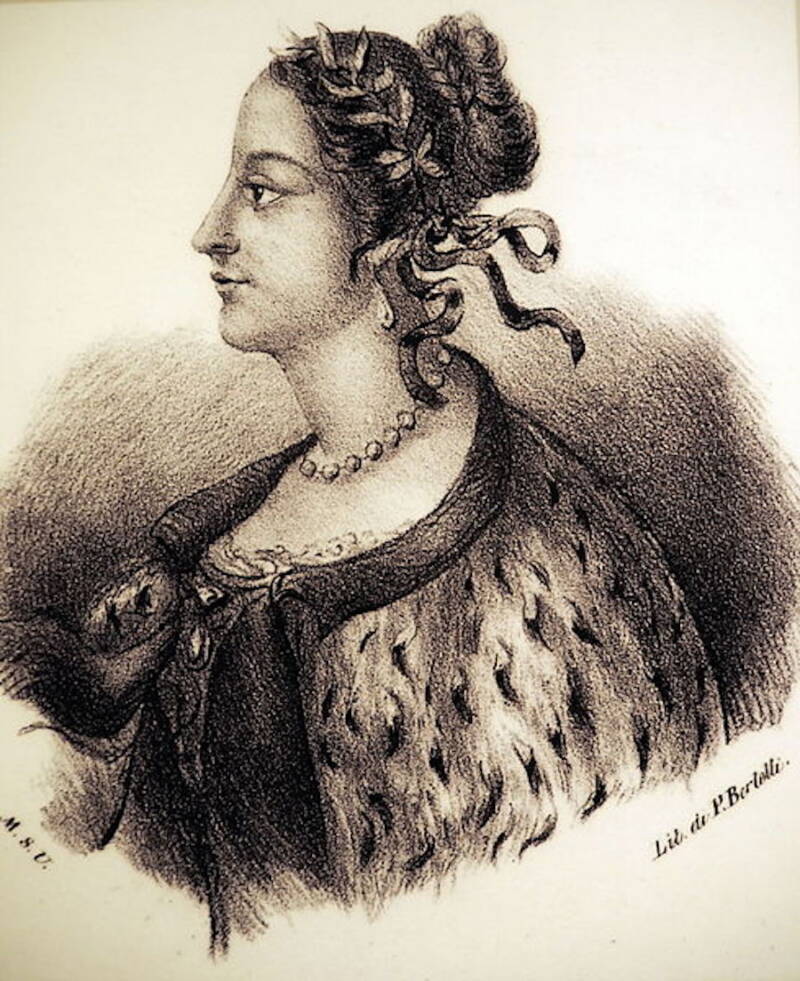 Bassi received a solid private education from the physician, who taught her about topics such as logic and metaphysics. Despite her young age, Bassi showed promise with her impressive intellect.

Eager to show off his star pupil, Tacconi introduced her to the local community of scholars in Bologna, and she was soon noticed by the scientifically-minded archbishop Prospero Lambertini (the future Pope Benedict XIV). Lambertini was known for supporting talent in whomever it might be found. 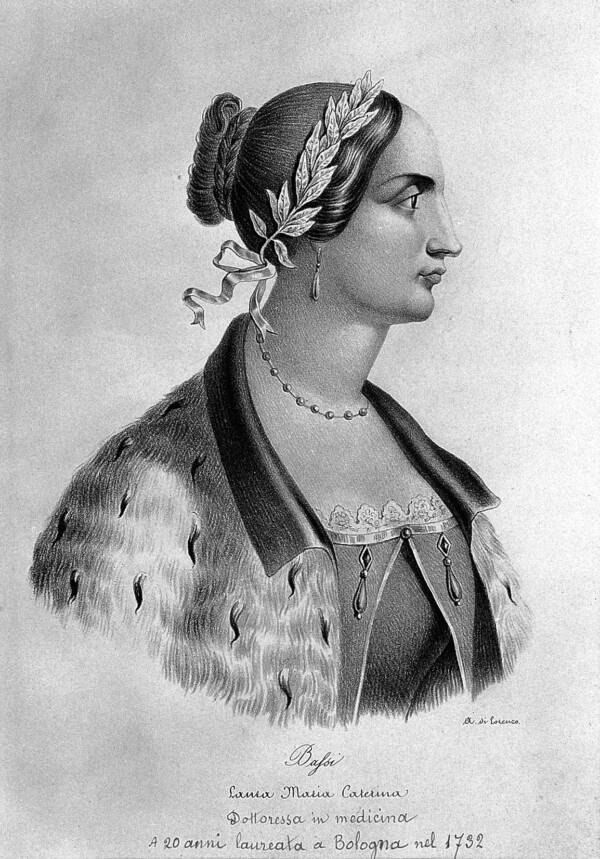 Friends and family persuaded young Bassi to begin participating in debates with other scholars and she soon became a public figure. She impressed her fellow luminaries so much that they began to propose her as a candidate for a university degree in philosophy.

After a highly publicized defense of her philosophy thesis in a town hall in 1732, she received her coveted degree of doctor of philosophy at age 21. This made her the second woman in Europe to receive a degree from a university after Elena Cornaro Piscopia in 1678.

Shortly thereafter, she was appointed as a professor at the University of Bologna, where she would teach physics. This made her the first female physics professor in Europe. Some even claim she was the first one in the whole world.

Of course, her position came with some restrictions “by reason of sex.” For example, she was only allowed to lecture occasionally when specifically asked by her employers to do so. However, she spent her career fighting for equal conditions and made some impressive headway for the time. 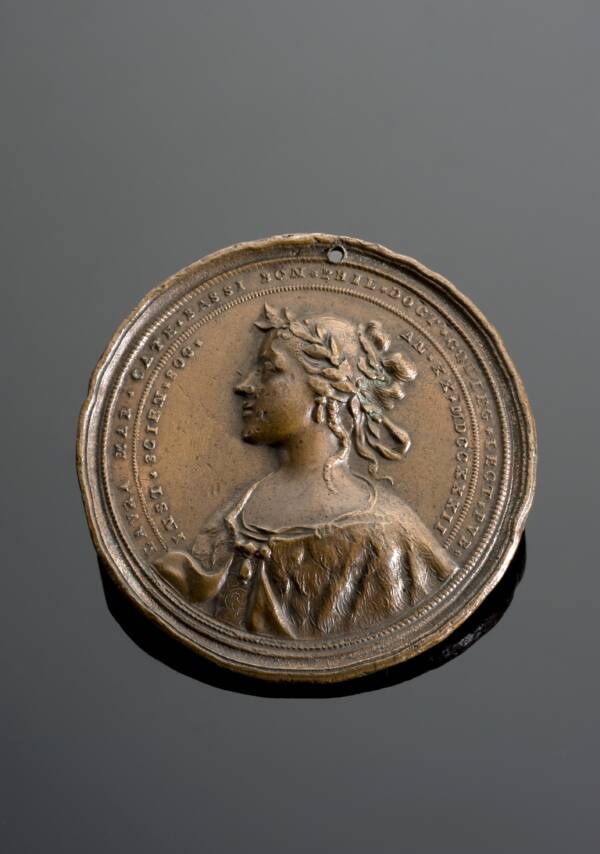 Wellcome Images | Wikimedia CommonsA medal was created to commemorate Laura Bassi in 1732. The other side shows Bassi as Minerva, the Roman goddess of wisdom and the arts.

She was also the first woman to be elected as an honorary member of the Academy of the Institute for Sciences in Bologna, paving the way for other female members.

Her career was off to a brilliant start — but it would not be without bumps in the road. 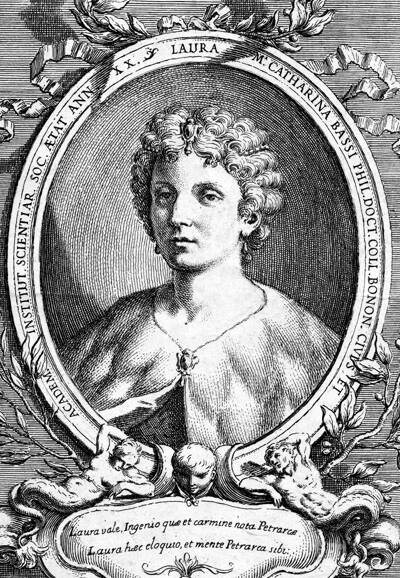 Throughout her teaching career, Laura Bassi played an important role in introducing new subjects into the university science curriculum. For example, she has been credited for spreading Newtonian physics and pioneering research on electricity in Italy.

In 1738, she married fellow physician and university professor Giuseppe Veratti, with whom she had eight children.

Her marriage garnered criticism from misogynist detractors, who said she was “probing the secrets of nature with her body rather than her mind.” Unlike other women of her time, she did not pursue knowledge from within the cloister as a nun but in the public sphere as a professor.

And unlike many other women who were encouraged to abandon their other pursuits after marriage for the home, she said pointedly: “I have chosen a person who walks the same path of learning, and who, from long experience, I was certain would not dissuade me from it.”

Even with Bassi’s detractors, archbishop Prospero Lambertini remained an important patron of Bassi after he was elected pope in 1740. A few years later, she was able to join the pope’s Benedettini — an elite group of 25 scientists — making her the only woman to be elected to the prestigious society.

By this point, her work was renowned from afar. The famous Enlightenment thinker Voltaire wrote to her: “There is no Bassi in London, and I would be much happier to be added to your Academy of Bologna than to that of the English, even though it has produced a Newton.” 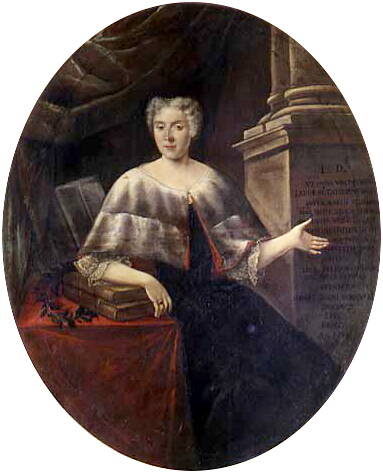 By 1749, she began offering private lessons at her home, which soon attracted both local and foreign aspiring scientists.

Bassi was not only well known for bringing Newtonian science to the university, but also for supporting Franklin’s theory of electrical attraction and repulsion. Scholars visiting from all across Europe and even from America were keen on visiting the dynamic duo.

Throughout Bassi’s life, she presented several dissertations on topics such as gravity, refrangibility, mechanics, and hydraulics. In the meantime, she along with her husband also helped make Bologna a center for experimental research in electricity.

In 1776, she received the ultimate honor when she was named the chair of experimental physics at the Institute of Science.

When Laura Bassi died at age 66 on February 20, 1778, she was one of the most famous women in Bologna. In a public funeral, her colleagues carried her casket in a solemn procession to the church of Corpus Domini in Bologna.

Much like her patron, Pope Benedict, Bassi was an “enlightened Catholic who saw no conflict between the pursuit of new knowledge and the traditions of faith.” In fact, the more she understood the natural world, the more she felt like she could appreciate God’s creation.

Unfortunately, she did not leave behind much published material. Only four of her papers were ever published. Since her death, her importance has become something of a footnote.

And as historian Paula Findlen points out, well into the 19th century, a generation of important scientific men were proud to say: “I went to Signora Dottoressa Laura Bassi’s school.”

After this look at the Enlightenment scientist Laura Bassi, read up on Marie Curie, one of history’s greatest scientists. Then, learn about Harriet Cole, the woman who donated her body to science — and changed our understanding of the nervous system forever.