The mystery of the Lead Masks Case began in the hills of Rio de Janeiro. There, on a bright summer day in 1966, a young man stumbled across two bodies. But the circumstances surrounding these corpses were bizarre from the start.

Side-by-side, and seemingly uninjured, the dead men wore lead masks over their eyes. The few items they had with them offered no answers, and one of them had a note in his pocket that only deepened the mystery.

A number of theories on the mysterious Brazilian deaths, ranging from the mundane to the supernatural, have emerged over the years. But investigators still don’t know why the two dead men wore lead masks, what exactly drew them into the Rio hills — or even what killed them.

How The Lead Masks Case Began

On Aug. 20, 1966, a young man named Jorge da Costa Alves decided to take his kite into the hills. As he wandered through Vintém Hill in Niterói, Rio de Janeiro, he came across the heart-stopping sight of two bodies in the weeds.

When police arrived they found a strange scene. Both dead men wore raincoats over their formal suits and homemade lead masks over their eyes. Nearby was an empty water bottle, some towels, and a little bit of cash.

But perhaps the most bizarre clue was a note that one of the dead men had in his pocket. It read:

The Lead Masks Case had begun. But although police managed to gather more information about the dead men in the next few days, each answer only led to more questions.

Who Were Manoel Pereira da Cruz And Miguel José Viana? 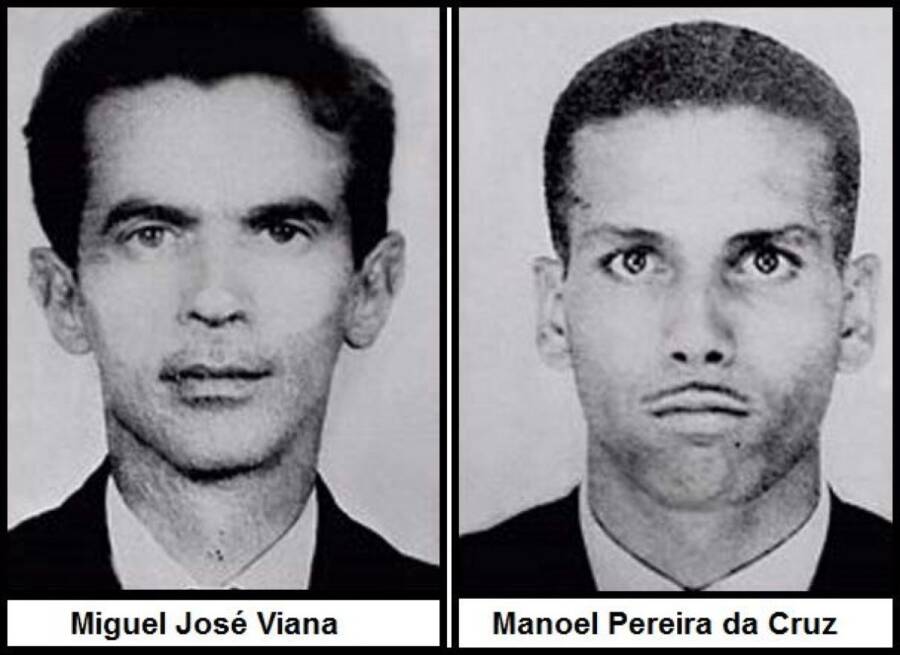 Police were soon able to identify the dead men as Manoel Pereira da Cruz, 32, and Miguel José Viana, 34. They were both married electronics repairmen who hailed from Campos dos Goytacazes, about 175 miles away from Niterói.

With their identities in hand, the police attempted to retrace their fatal steps. They found that Pereira da Cruz and Viana had told their families on the morning of August 17 that they needed to go to Sao Paulo to buy equipment and a car. Instead, the two men had boarded a bus for Niterói.

After arriving in Niterói around 2 p.m., the men made several stops. They bought identical raincoats at a local store and a bottle of mineral water at a bar. Significantly, they kept their receipt, suggesting that they meant to return the empty bottle later for the refund.

But witnesses who remembered them could tell that something was off. The bartender who’d sold Viana and Pereira da Cruz the water bottle recalled that Viana seemed nervous. She told police that he kept checking his watch.

From there, the Lead Masks Case went cold. Manoel Pereira da Cruz And Miguel José Viana were last seen heading into the hills around 3:15 p.m. Three days later, they were found dead.

To date, no one is exactly sure what happened in the hills of Rio de Janeiro that strange August. Even Pereira da Cruz and Viana’s bodies offered few clues, as they’d decomposed too much for an accurate toxicology report.

But theories have emerged over the years. As police discovered at the time, Pereira da Cruz and Viana were more than simply electronics repairmen.

According to Pereira da Cruz’s wife, both men had dabbled in “scientific spiritism” — and both were interested in contacting alien spirits. In fact, they’d tried multiple times with their friend Elcio Gomes.

At one point, an electronic device the men had built together blew up in Pereira da Cruz’s backyard. The three had apparently tried the device again on a beach, and claim to have witnessed an explosion in the sky.

Police, however, followed more terrestrial leads. They briefly eyed Gomes as a suspect since Pereira da Cruz’s wife said that he’d fought with her husband. Gomes also had told them contradictory stories.

And another man, Hamilton Bezani, even told police he’d helped rob and kill Pereira da Cruz and Viana after meeting them at a spiritualism center and luring them to Niterói. He claims an accomplice told him, “We have killed them both. We forced them, at revolver point, to take the poison.”

However, police were unable to find anything to back up his story.

In the end, it’s not enough to know why the two men went into the hills. This mystery continues to fascinate and frustrate because nobody knows what happened once they got up there.

Manoel Pereira da Cruz and Miguel José Viana climbed Vintém Hill with a mission in mind. They slipped a lead mask over their eyes. Then their world went dark — and the mystery of the Lead Masks Case began.

After reading about the head-scratching Lead Masks Case, discover the stories of other unsolved mysteries like Australia’s Somerton Man or Massachusetts’ Lady of the Dunes.