The Horrifying Effects Of Lead On The Human Body 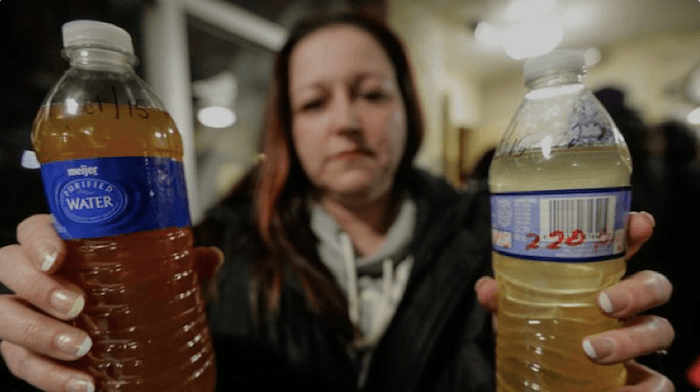 Tap water in Flint, Mich., has a distinct discoloration. It also has toxic levels of lead. Image Source: Twitter

The children of Flint, Mich., are in danger. In 2014, Flint city government officials decided to change their water source, and thus started to use improperly filtered water from the local Flint River. The dirty water was then transported through a piping system desperately in need of an upgrade. The result: Thousands of people exposed to toxic levels of lead and a federally declared state of emergency.

Water flowing to Flint’s 100,000 residents had a distinctly brownish-yellow color. Still, government officials didn’t take action for another year and a half. By January 2016, all of Flint’s 8,657 children under the age of six were considered to have been exposed to lead. Lead exposure can harm anyone, but it is especially harmful to children—something that people have known for at least a century. Here’s why:

What lead exposure means for children

Children, especially young boys, are the most susceptible to lead’s damaging neurological effects, such as nervous system damage, decreased bone and muscle growth, as well as the development of ADD and language impediments. None of these ailments are curable. And while there isn’t a “safe level” of lead to which one can be exposed, children experience harsh side effects at lower levels than adults.

Children under six years old are at particularly high risk, as they haven’t fully developed something called the blood brain barrier. The blood brain barrier is the human body’s way to keep harmful chemicals out of the brain. When lead travels to the brain, it primarily affects the frontal cortex—where abstract thought, planning and attention happen—and the hippocampus—where learning and memory takes place.

What lead exposure means for adults

While comparatively less dramatic, lead exposure is detrimental to the health of adults as well. The body confuses lead with calcium, moving the metal from red blood cells to soft tissues and even into bones, where it can stay for decades, slowly releasing amounts throughout a person’s lifetime.

In adults, lead can cause: Fertility issues (in both men and women), nerve disorders, memory and concentration problems, and muscle and joint pain.

What you can do after you’ve been exposed

After lead enters the body—either through ingestion or inhalation—there is little that can be done to mitigate its negative effects. There isn’t a single treatment for low levels of lead in the blood stream, or any way to reverse the mental and physical effects on the body.

Chelation therapy is the only medical response to lead poisoning. The chemical procedure keeps lead from being absorbed in the body, thereby protecting soft organ tissue.

The only way to escape lead poisoning is by avoiding lead altogether. Unfortunately for the residents of Flint, Mich., it’s already too late for that.