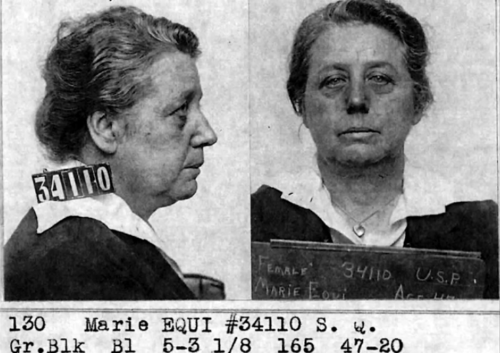 While a contemporary of Planned Parenthood founder Margaret Sanger, history has buried many of Marie Equi’s contributions to women’s health (including birth control and access to abortion). This historical erasure may stem from the fact that — besides being a rebel physician of her time — Equi was also a lesbian.

Born to immigrant parents, Equi grew up in Massachusetts, where existing social mores may have given her some insight into her sexuality early on in life. At the time, professional and wealthy women in New England would occasionally engage in same-sex relationships known as “Boston Marriages,” where the couple would live under the same roof to varying degrees of emotional and sexual intimacy.

Equi eventually left Massachusetts for Portland, Oregon, where in 1905 she founded her own practice and became one of just 60 female physicians in the state. Shortly thereafter, Equi began providing abortions — and to any woman, regardless of age, race, or social status (though she did admit to charging wealthy women more, in order to help cover the costs of running her practice). This tiered payment scheme offered an early model of the “sliding scale,” which many private medical practitioners employ today.

Unlike many of her colleagues, Equi managed to avoid arrest for providing abortions. She did, however, get into trouble for offering birth control and disseminating information about it to women in her practice and community.

It was during this time Equi met Margaret Sanger, with whom she was arrested in 1916. Equi continued to write to Sanger for many years following their encounter, and did not attempt to conceal her infatuation with her.

Equi did have a partner of her own, Harriet Speckart. Together, the two adopted a baby. While that may merely raise some eyebrows today, at the turn of the 20th century same-sex adoption was virtually unheard of — and often punishable by law.

Furthermore, Equi did not advocate for women alone. She also lobbied for the eight-hour workday, and opposed U.S. involvement in World War I, saying that it was little more than an imperial land grab.

Her opposition to the war — Equi famously unfurled a banner in Portland that said “Prepare to die, workingmen, JP Morgan & Co. want preparedness for profit” — ultimately rendered her a “security threat” in the eyes of the federal government, and in 1918, she was convicted Equi of espionage.

Originally sentenced to three years in San Quentin prison, President Woodrow Wilson lifted her sentence to just over a year — which Equi didn’t serve in its entirety due to good behavior.

Although Equi continued to practice medicine and advocate well into old age, health problems certainly did slow her down. When she died, at the age of 80 in 1952, her obituary ran in newspapers across the country.