From War To Peace: Signs Of A Changing Liberia 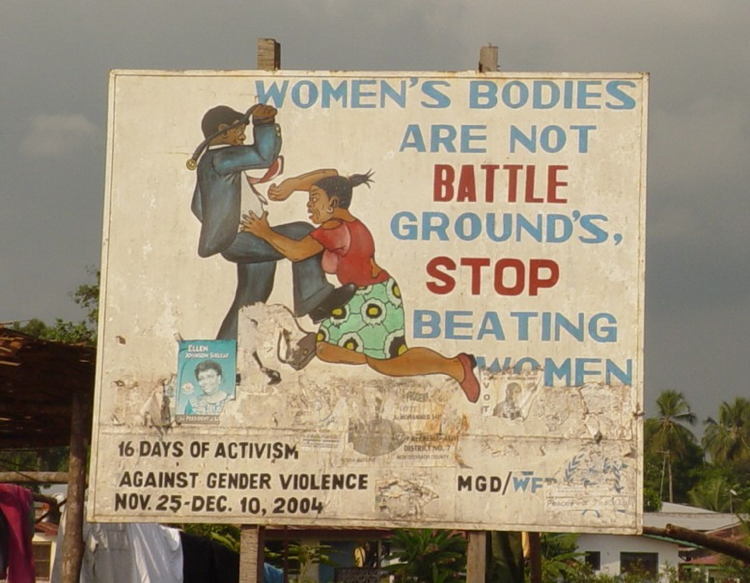 From 1989 to 2003, Liberia collapsed into a devastating civil war which claimed over 250,000 lives, displaced millions and destroyed what could have been a prosperous economy. At a time when governance was weak, security had ruptured and societal norms had lost their meaning, sexual violence became a widely-used tool of warfare: the UN estimates that during the conflict, 75 percent of Liberian women were raped, the majority of whom were under the age of 18.

Violence against women extended beyond rape, and included sex slavery, forced stripping and marriage to combatants, with a secondary economy forming around the exchange of aid, employment and other goods for sexual favors. In some cases, child soldiers–a sadly common sight in the Liberian civil war–were forced to rape their mothers, sisters and grandmothers as a form of “initiation”. Given the extent to which women in Liberia bore the intimate costs of war, it’s not surprising that women were instrumental in bringing an end to the protracted conflict. 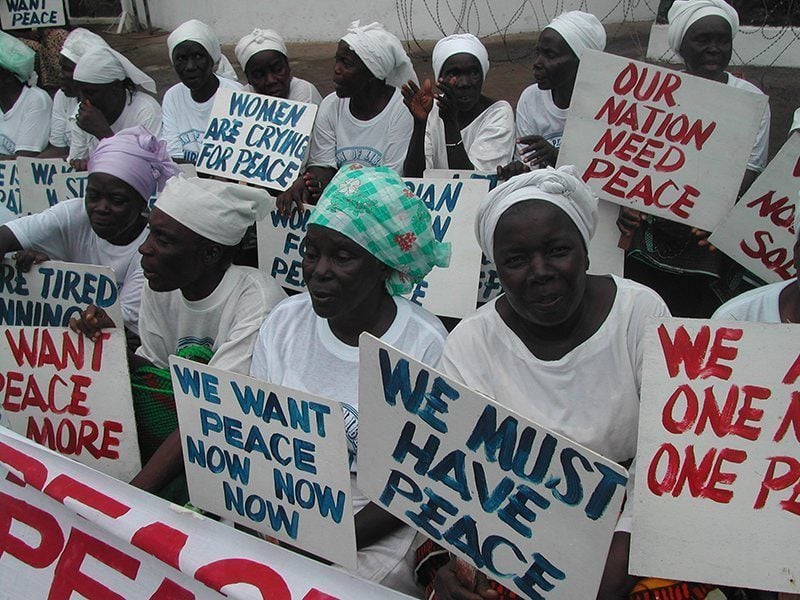 Liberian women in a demonstration for peace Source: Wiki Gender

The Women’s Peacebuilding Network forced warlords to make a deal with Liberian president Charles Taylor, which brought a formal end to the civil war. But when combatants returned from the battlefields, the war didn’t really end; rather, it was carried out in a more familiar, private and social terrain: the power dynamic between men and women. Sexual violence against women has persisted, virtually to the point of normalization.

A number of local and international actors have made efforts to raise awareness about the criminality of rape and sexual violence, and provide health services to their victims. Nevertheless, sexual violence consistently tops monthly police crime listings in Monrovia, the Liberian capital. 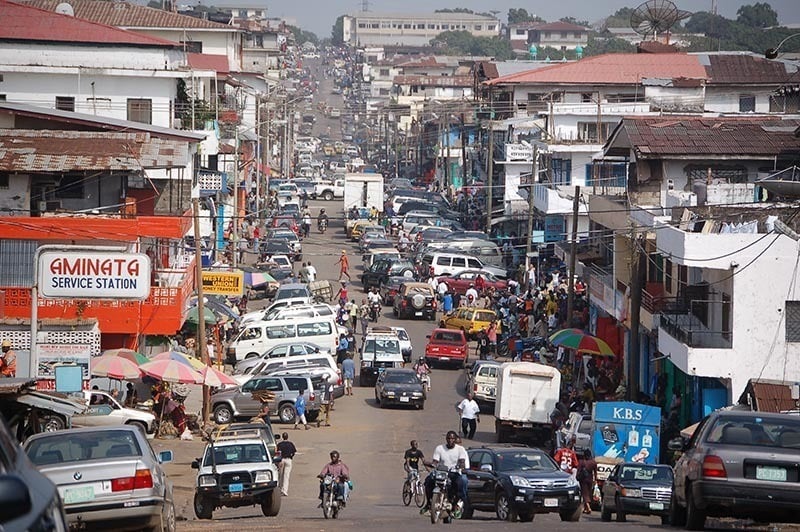 That’s not to say that the Liberian government as a whole doesn’t take the issue seriously, or that high reports of sexual violence means that nothing is changing. It could be indicative of the fact that more women feel comfortable coming forward about an attack, which is progress.

Besides that, President Ellen Johnson Sirleaf has made addressing and solving the problem of sexual violence a key tenet of her presidency, and since the war’s end the Liberian government has issued a National Action Plan to End Gender-Based Violence with the UN; expanded (and made gender neutral) the definition of rape, and created a separate court with exclusive jurisdiction over sexual offenses. However, funding and capacity issues have raised questions about the efficacy of these developments. 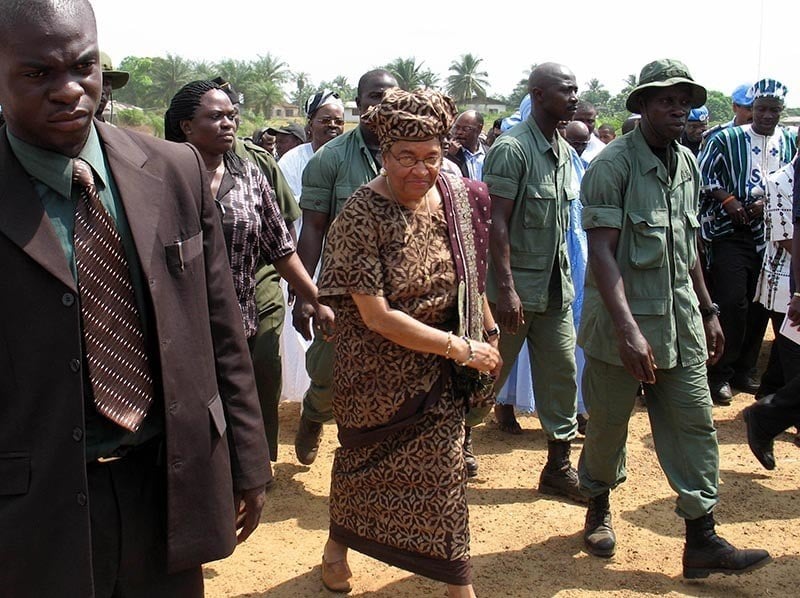 Given the area’s low literacy rates and access to television or internet, many actors have chosen to install graphic illustrations as part of their awareness campaigns. The following photos show the attempts of numerous actors to address the problem of sexualized and gender-based violence in a post-war region. 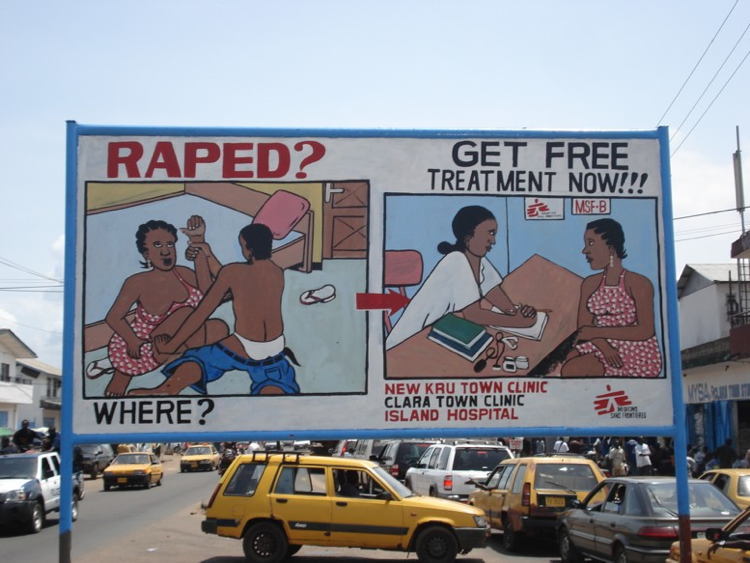 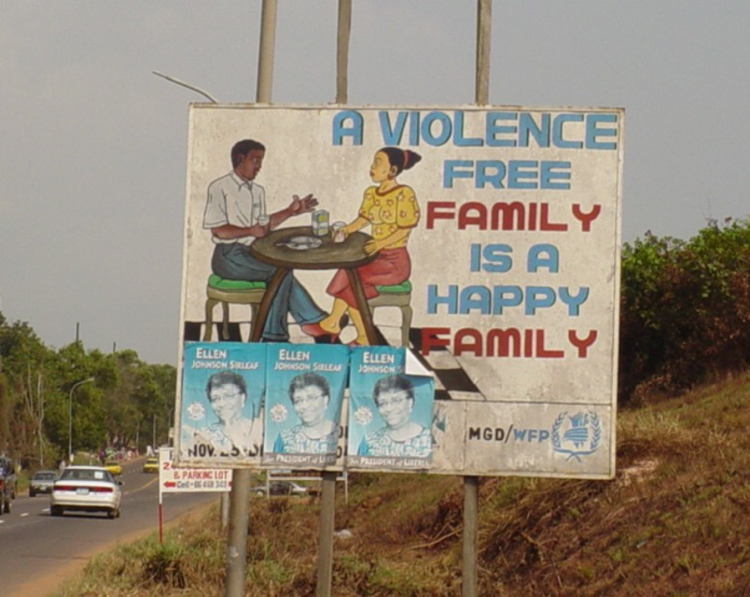 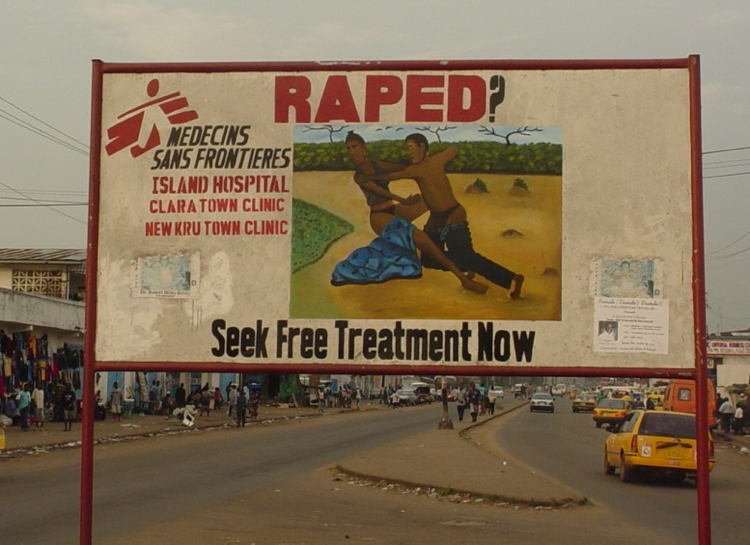 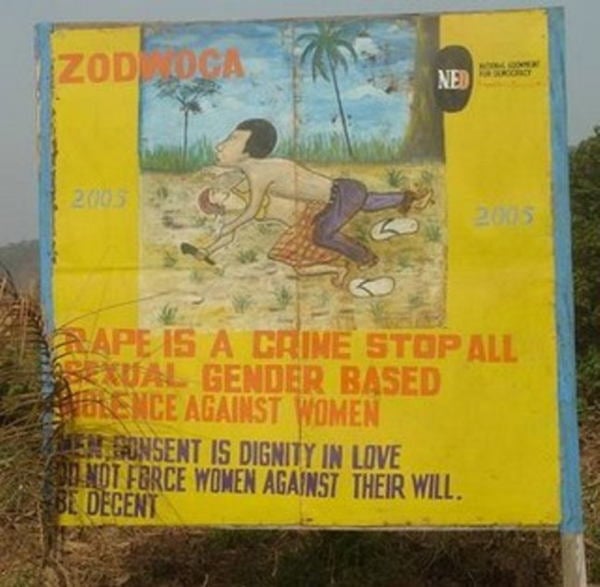 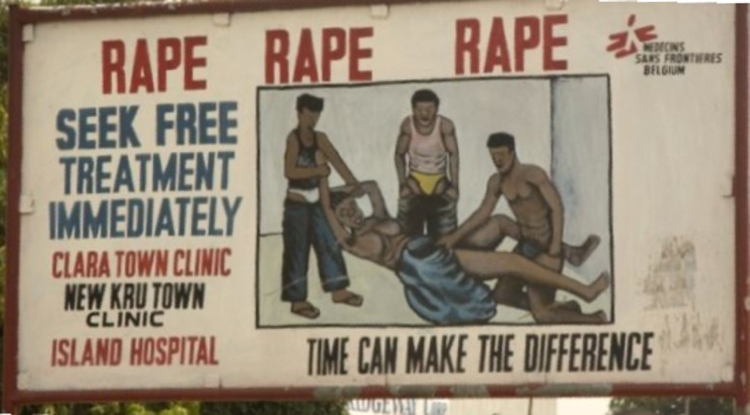 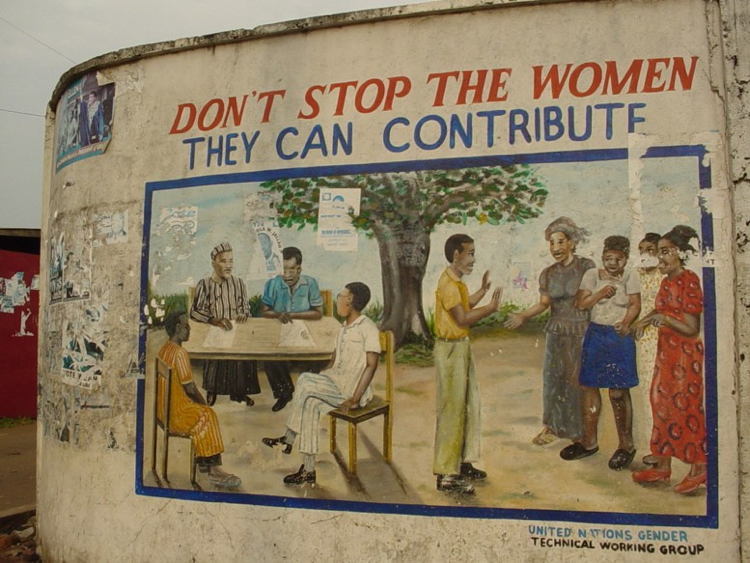 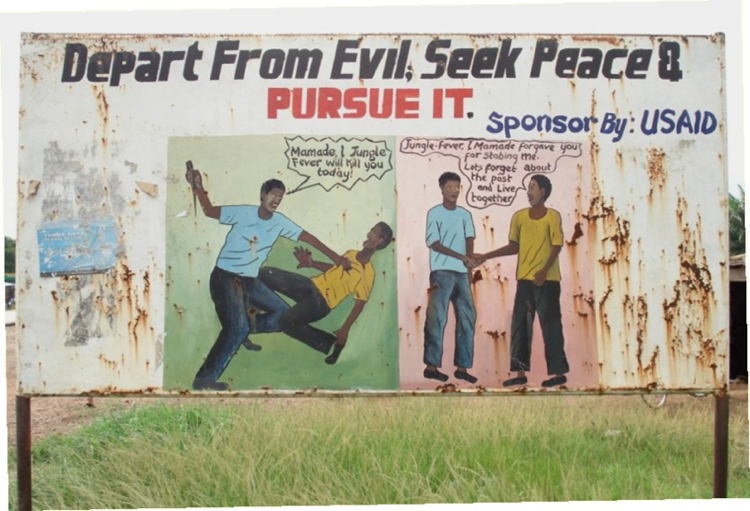 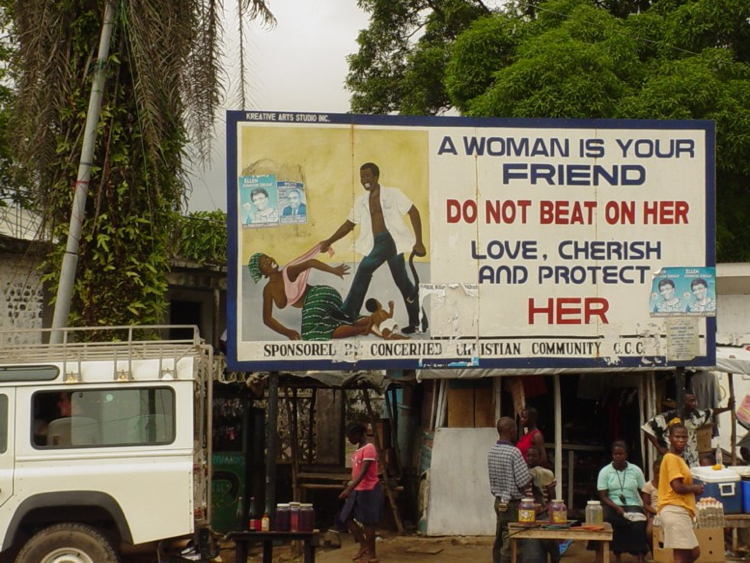 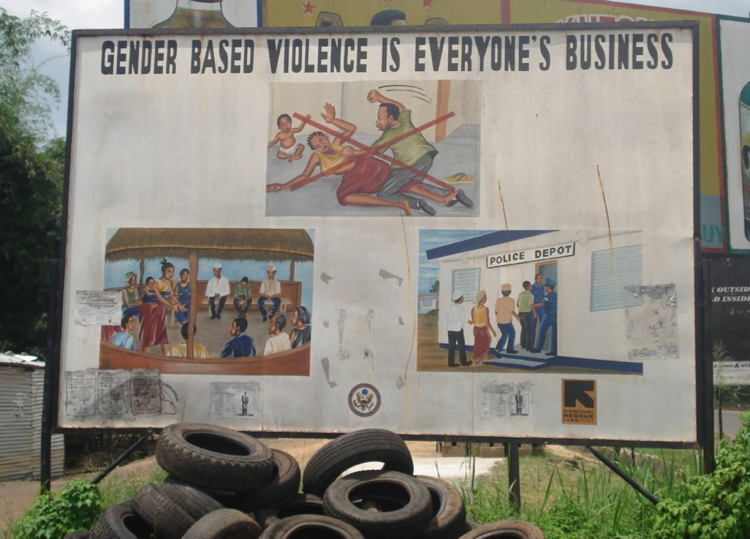 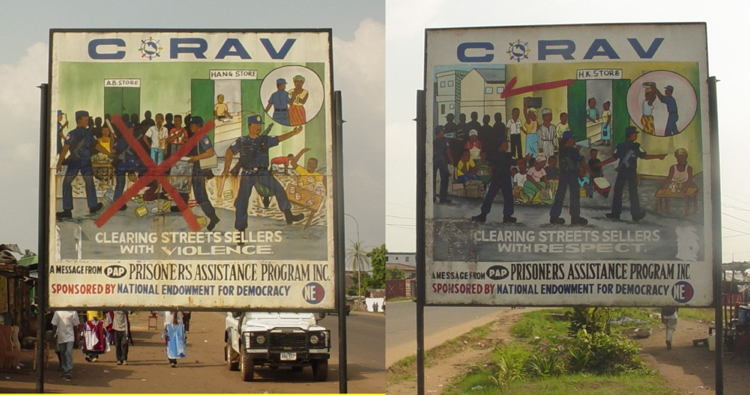 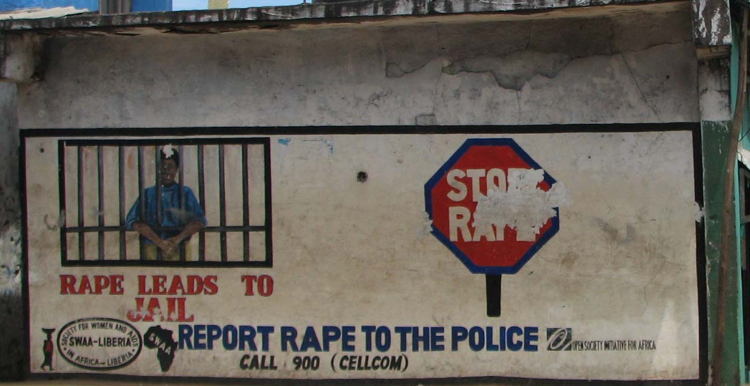 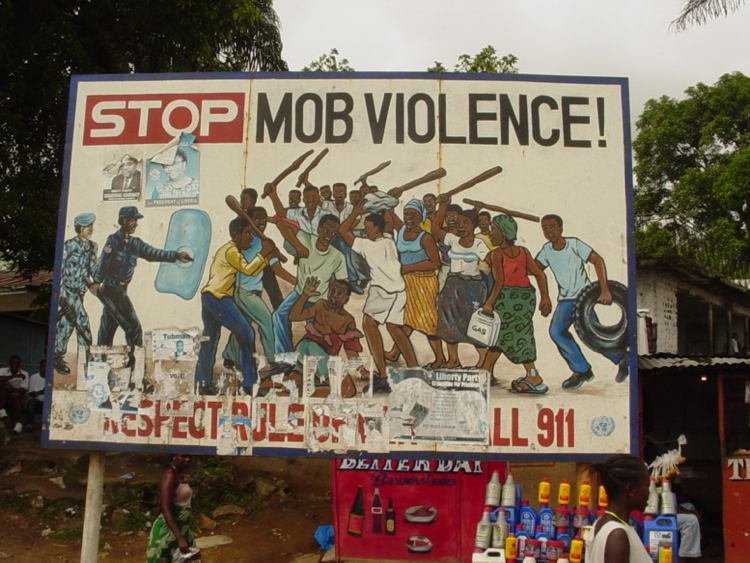 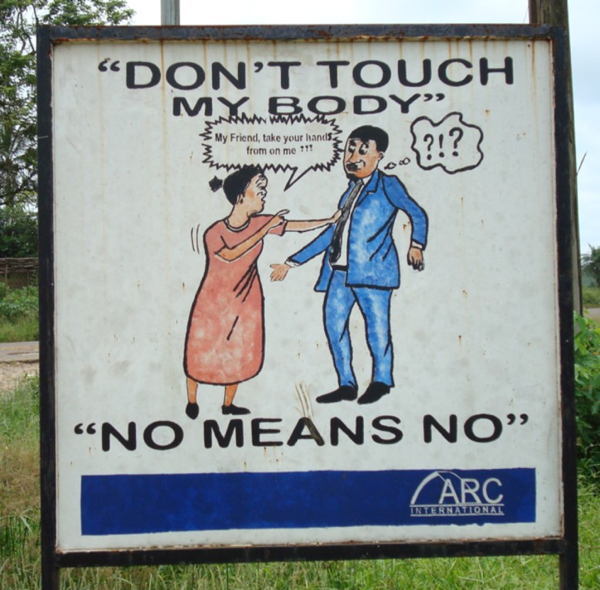 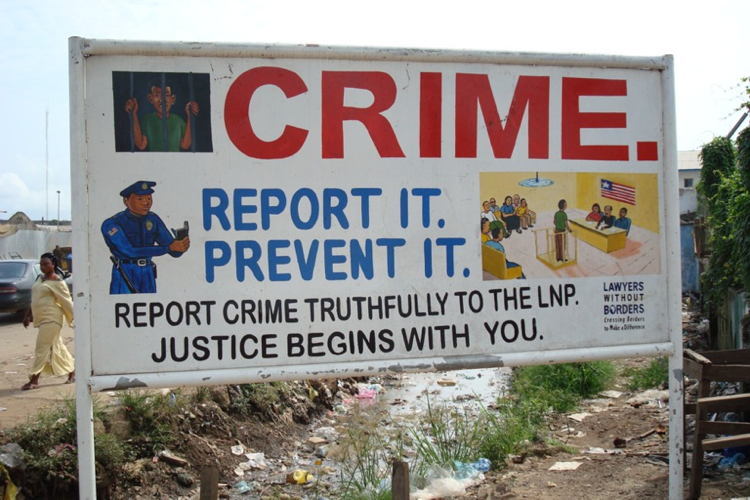 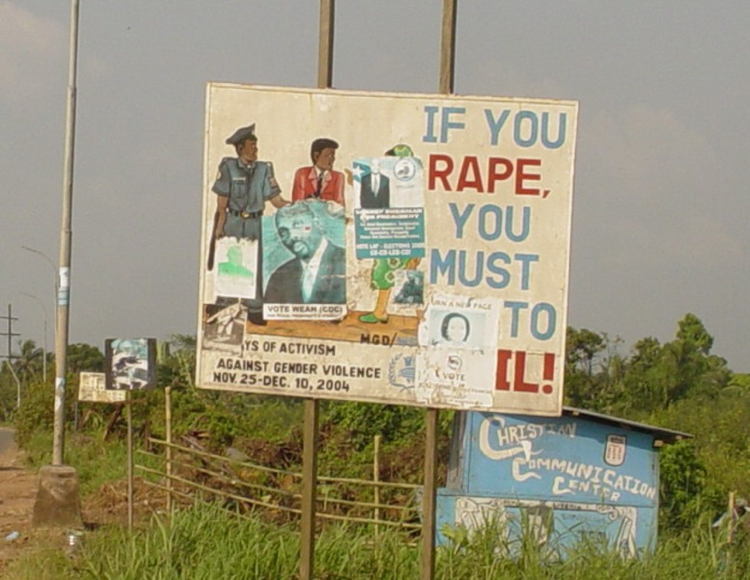 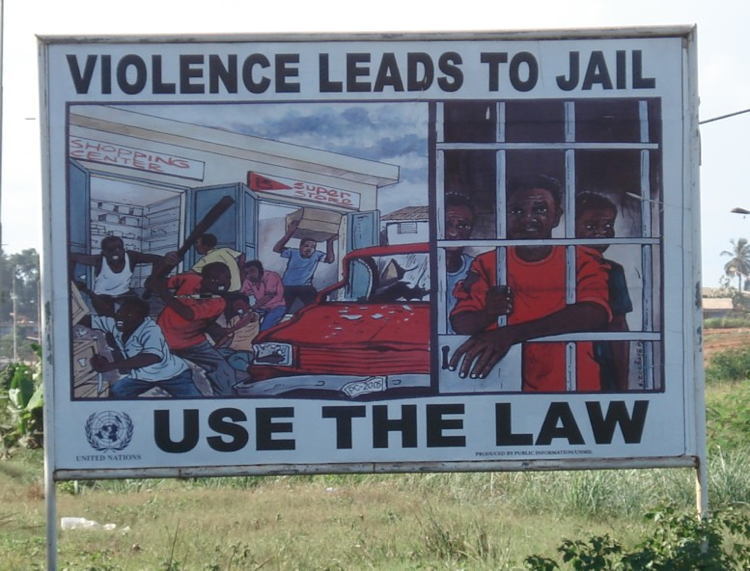 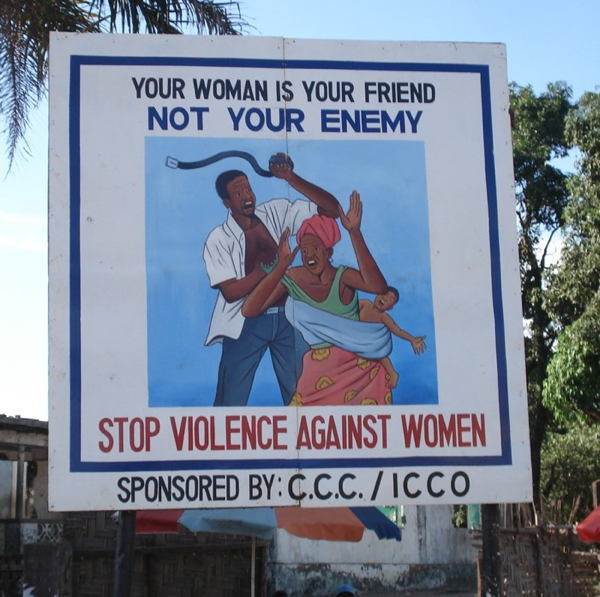 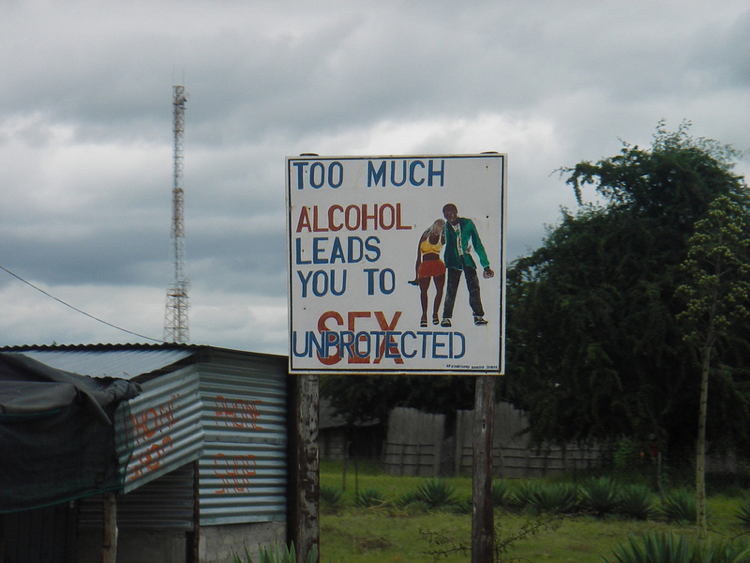 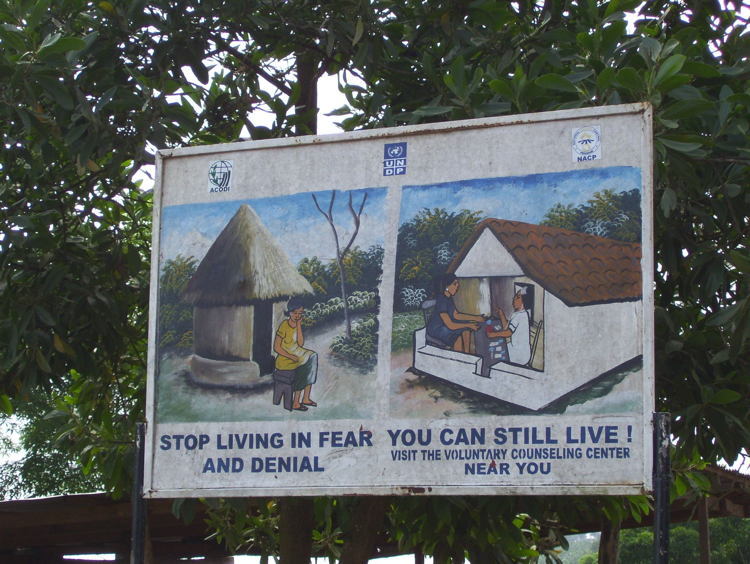 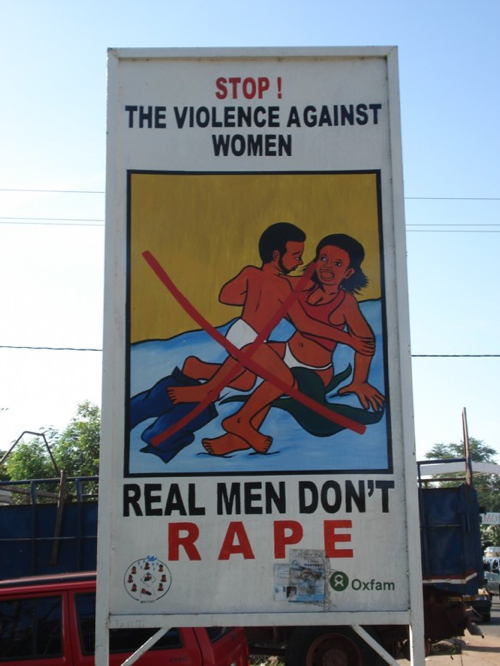 1 of 22
According to the results of a government survey in 10 of Liberia's 15 counties for the period 2005-2006, 92 percent of the 1,600 women interviewed said they had experienced some form of sexual violence, including rape. Source: Imgur
2 of 22
During the war, child soldiers were occasionally forced to rape their mothers, sisters and grandmothers as part of their "initiation". In this case, rape as a mandated form of warfare damaged both the victim and perpetrator. Source: Imgur
3 of 22
Awareness campaigns seem to be having some positive impact. Annie Jones Demen, Liberia's deputy Gender Affairs minister and coordinator of a gender-based violence task force said in a recent interview that "We now have more reports on sexual and gender-based violence. Survivors of sexual violence now feel safe to come out to say they were raped." Source: Imgur
4 of 22
Still, medical staff at a Doctors Without Borders-run hospital report that "There is always a high influx of girls, mostly teenagers who come to this hospital complaining that they were raped...Rape is now the new war in Liberia." Source: Imgur
5 of 22
The UK thinktank Overseas Development Institute (ODI) looks to "hyper masculinity" as a reason behind the rapes. Said one ODI employee, "Hyper masculinity is really trying to capture the idea of men’s anger and frustration at the roles they find themselves in after the war." Source: Imgur
6 of 22
While initial reports are high, the number of rape cases brought to court in 2013 was in the single digits. This is perhaps indicative of problems in administrative capacity, persisting social taboos, a culture of fear and a wanting police force. Source: Imgur
7 of 22
Said Lois Bruthus, head of the Female Lawyers Association of Liberia (AFELL), "We need more lawyers to take on the task of seeing to it that rapists are fully prosecuted. Our girls, women and children are being abused regularly." Source: Imgur
8 of 22
Humanitarian news site IRIN has a different take on this discrepancy. "Many times, perpetrators are let go due to lack of evidence, as it is often a child’s word against an adult’s. Other times, the cases are not reported until well after the fact and it is too late to gather physical evidence." Source: Imgur
9 of 22
They add that because no mandated rape-reporting system exists in Liberia, it's up to the victim to report the case. Source: Imgur
10 of 22
Many county hospitals in Liberia have developed gender-based violence units where women can receive medical support. However, as IRIN says, units are small and funding is meager. Source: Imgur
11 of 22
In an interview with TIME, Felicia Coleman, chief prosecutor of the Sexual and Gender-Based Violence Unit in the Liberian Ministry of Justice said that “Very rarely they [the rapists] are strangers. They are people close to the victim. They live next door, or right in the house.” Source: Imgur
12 of 22
ODI employees believe that to truly combat the problem of sexual violence, it will be necessary to rebuild Liberia's health and justice systems. That could take years, and would require a hefty investment on behalf of the international community. Source: Imgur
13 of 22
They add that mass awareness campaigns are a great step to addressing the problem. But to them, a dialogue between men and women needs to take place to create a culture of understanding and openness. Source: Imgur
14 of 22
For men in Liberia, war became a way of life, provided a sense of purpose and "security". Some at ODI hypothesize that the adjustment process to a post-war life and different roles has led to increased tensions between men and women, and has contributed to men's tendency to re-focus the war on another "object": the woman. Source: Imgur
15 of 22
Thus in addition to increased dialogue and a rebuilding of legal and health systems, ODI employees think it's vital that men are provided with better skills-training so that they can find work and reduce feelings of post-conflict inadequacy. Source: Imgur
16 of 22
They also advocate for improved access to micro-credit for the same reasons. Source: Imgur
17 of 22
But rape culture's origins in Liberia preceded the civil wars. Women were considered to be male property, and violence against them was seen as a "man's right". Source: Imgur
18 of 22
For example, one indigenous religion, Poro, states that rape of virgins or babies will lead to employment or good luck. Source: Imgur
19 of 22
After the war's end, Doctors Without Borders noted a troubling change in the nature of sexual violence: according to their statistics, 85 percent of perpetrators know their victim first-hand. Source: Imgur
20 of 22
But there's hope. According to ODI research fellow Nicola Jones, "If there are a lot more resources, if the resource commitment is for the long term, if we work at multiple levels and with boys, girls, men, women, religious leaders - everyone - to try and change the attitude that rape is something that is normal and acceptable, and almost seen as an inevitable evil at the moment, and that instead it is a violation of girls’ and women’s’ rights...then, yes, I would say I am cautiously optimistic that we will see a change.” Source: Imgur
21 of 22
Liberian women in a demonstration for peace Source: Wiki Gender
22 of 22 From War To Peace: Signs Of A Changing Liberia
View Gallery

Said 13-year-old Macdell Smallwood in 2009, "Because of rape cases in Monrovia, I am afraid to even move around with my friends...we cannot go out or play freely as we used to when we were younger.” Sexual violence has left a dark stain on Liberia's past. If left unmediated, it will also sully its future.

Listen to women describe their experiences in "post-war" Liberia and Sirleaf's remarks on gender below: