On October 5, 2011, Steve Jobs died after a battle with a rare pancreatic cancer at age 56. But he may have lived longer if he sought proper medical care in time.

When Apple co-founder Steve Jobs was first diagnosed with pancreatic cancer in 2003, his doctors advised him to seek surgery as soon as possible. Instead, he delayed the procedure for nine months and attempted to treat himself with alternative medicine. This fateful decision may have quickened Steve Jobs’ death — when he still could’ve been saved.

Steve Jobs died from pancreatic cancer complications on October 5, 2011, just eight years after his initial diagnosis. He was only 56 years old when he died, but his cancer had taken such a toll on his body that he looked gaunt, frail, and much older than his actual age. It was a far cry from the robust, energetic man who had once pioneered the personal computer era. 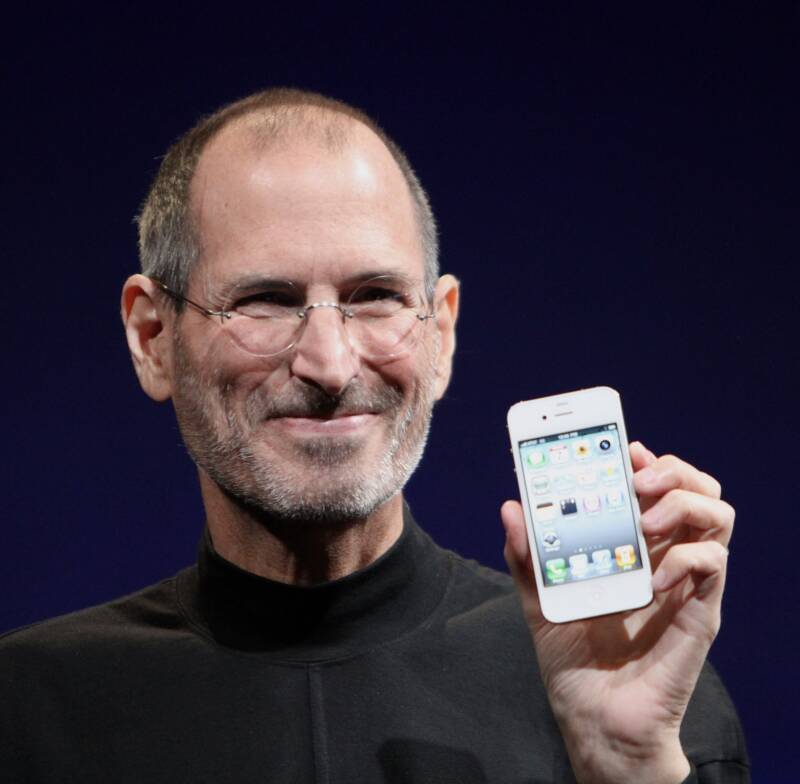 Wikimedia CommonsSteve Jobs died in 2011, a little over a year after he presented the iPhone 4.

In life, Steve Jobs was renowned for thinking differently. At Apple, he had masterminded world-changing products like the Macintosh computer, the iPhone, and the iPad. Jobs’ genius came from his exacting, demanding nature and his uncanny ability to think outside the box. But tragically, he used the same mindset to confront his pancreatic cancer.

Though he eventually sought proper treatment, it was too late. As the years passed, and Jobs grew sicker, the public could tell that something was wrong. But Jobs downplayed his health problems — and threw himself into work. He changed the world when he introduced the iPhone in 2007. But two years later, in 2009, he had a liver transplant and took a leave of absence.

And in 2011, Jobs took another leave of absence. That August, he resigned as the CEO of Apple. As he lay dying on October 5, 2011, Steve Jobs took one last look at his family. Then his gaze rose over their shoulders as he spoke his final words. “Oh wow,” Jobs said. “Oh wow. Oh wow.”

This is the tragic story of Steve Jobs’ death — and the fateful choices that may have sent him to an early grave.

The Rise Of Steve Jobs And Apple

Born on February 24, 1955, in San Francisco, California, Steven Paul Jobs was given up by his biological parents early on. He was adopted by Paul and Clara Jobs as a baby. When he was six years old, a young neighbor told him that his adoption meant “your parents abandoned you and didn’t want you.”

“[They said] ‘You were special, we chose you out, you were chosen,'” explained Jobs’ biographer Walter Isaacson. “And that helped give [Jobs] a sense of being special… For Steve Jobs, he felt throughout his life that he was on a journey — and he often said, ‘The journey was the reward.'”

Steve Jobs’ journey zigged and zagged. After growing up in Cupertino, California, he enrolled at Reed College but soon dropped out. He quit one of his first jobs as a video game designer, experimented with drugs like LSD, and even traveled to India in search of spiritual enlightenment. But throughout his early life, one thing remained constant: his fascination with technology.

As an eighth-grader, Jobs boldly called William Hewlett, the co-founder of Hewlett-Packard, after he discovered that he was missing a part for a frequency counter that he wanted to assemble. After preparing the parts for Jobs to pick up, Hewlett offered him a summer internship.

In high school, Jobs made a fateful friend in Steve Wozniak, the future co-founder of Apple, when they took an introductory electronics class. Wozniak and Jobs later attended Homebrew Computer Club together. Eventually, Wozniak had the idea to build a machine of his own. 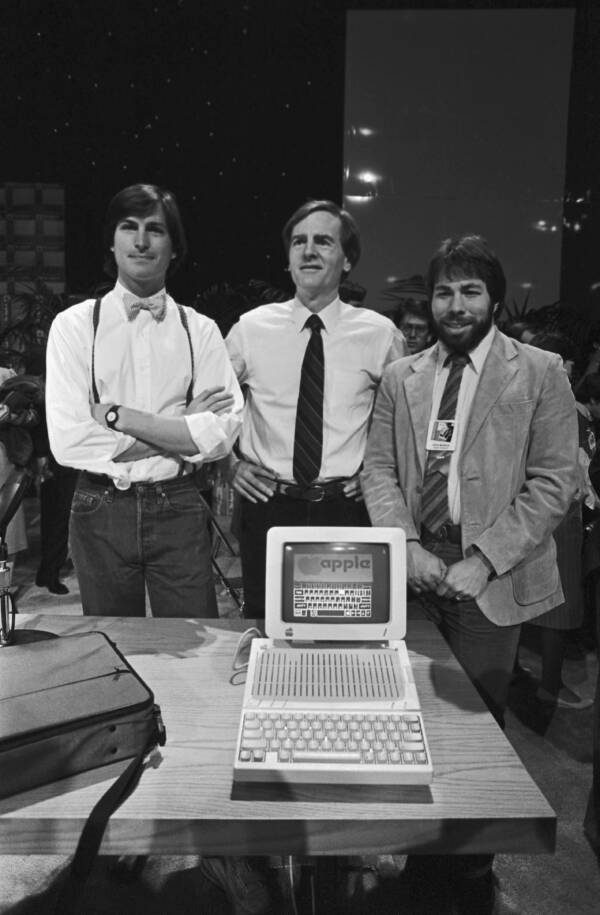 But while Wozniak simply liked to build things, Jobs wanted to build a company — and sell commercial products to people. In 1976, Jobs and Wozniak famously started Apple in Jobs’ family’s garage.

From there, the company exploded. They introduced Apple II in 1977 (Wozniak’s first computer had been Apple I) to great fanfare. The first mass-market personal computer, Apple II helped the company soar to success.

Jobs’ perfectionism helped churn out popular products. He insisted that Macintosh developers go through over 20 iterations of the computer’s title bars — “It’s not just a little thing. It’s something we have to do right,” Jobs yelled — and scoffed when he heard a Microsoft engineer’s plan for a tablet.

“F*ck this,” Steve Jobs said, prior to the development of the iPad. “Let’s show him what a tablet can really be.”

But even as Apple solidified its status as one of the most important tech companies of the 21st century, Jobs himself had begun to fade. In between the release of the iPod and the iPhone, he was diagnosed with cancer.

How Did Steve Jobs Die?

In 2003, Steve Jobs went to the doctor for kidney stones. But the doctors soon noticed a “shadow” on his pancreas. They told Jobs that he had a neuroendocrine islet tumor, a rare form of pancreatic cancer.

In a way, it was good news. People diagnosed with neuroendocrine islet tumors generally have a far better prognosis than those with other forms of pancreatic cancer. Experts urged him to seek surgery as soon as possible. But to the dismay of his loved ones, he kept putting it off.

Instead, Jobs leaned into what Isaacson called “magical thinking.” For nine months, he tried to cure his disease with a vegan diet, acupuncture, herbs, bowel cleansings, and other remedies that he found online. At one point, he even reached out to a psychic. Jobs had willed an entire company into existence, and he seemed to believe he could do the same with his health.

But his cancer wasn’t going away. Finally, Jobs agreed to have the surgery. In 2004, he admitted to Apple employees that he’d had a tumor removed.

“I have some personal news that I need to share with you, and I wanted you to hear it directly from me,” Jobs wrote in an email.

Despite Jobs’ reassurances, it was clear that he wasn’t quite out of the woods. In 2006, concerns about his health spread after he appeared looking gaunt at Apple’s annual Worldwide Developers Conference. However, an Apple spokesperson insisted, “Steve’s health is robust.” 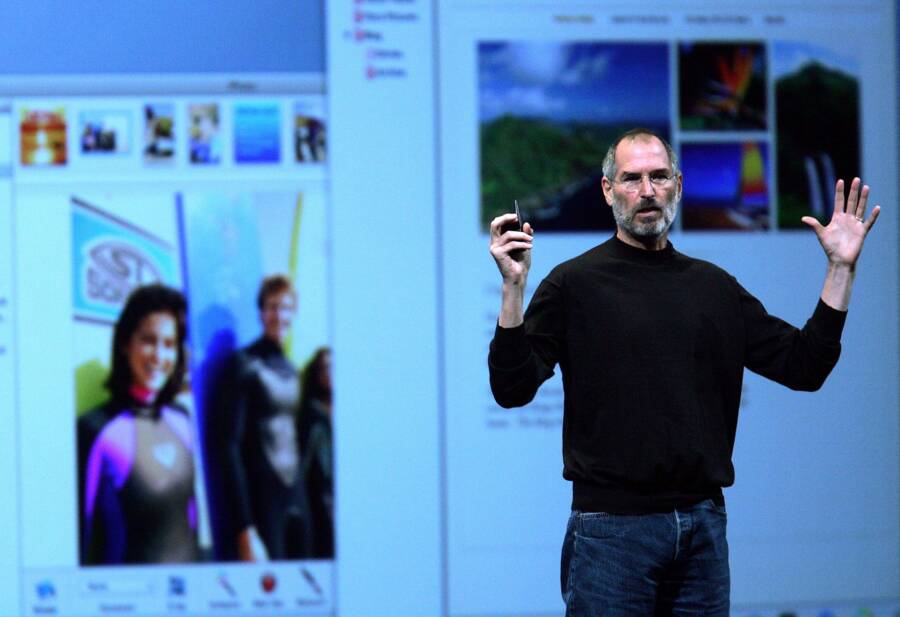 But to anyone watching, it was obvious that something was wrong. Jobs showed up to Apple events looking as gaunt as ever in 2008. And he bowed out of a keynote address in 2009. All the while, both Jobs and Apple dismissed concerns about his health and downplayed his problems.

Apple claimed Jobs simply had a “common bug.” Meanwhile, Jobs blamed his weight loss on a hormone imbalance. At one point, he even quipped: “Reports of my death are greatly exaggerated.”

But by early 2009, Steve Jobs couldn’t deny his illness any longer. He took a medical leave of absence and notified Apple employees via email.

“Unfortunately, the curiosity over my personal health continues to be a distraction not only for me and my family, but everyone else at Apple as well,” Jobs wrote. “In addition, during the past week, I have learned that my health-related issues are more complex than I originally thought.”

Still, The Wall Street Journal shocked the world in June 2009 when they broke the news that Jobs had had a liver transplant in Tennessee. Though the hospital initially denied that he was a patient, they later admitted to treating him in a public statement. They also added, “[Jobs was the] sickest patient on the waiting list at the time a donor organ became available.”

Though Steve Jobs returned to work after six months away, he continued to struggle with his health. In January 2011, he took another leave of absence. By that August, he had stepped down as the CEO of Apple.

“I have always said that if there ever came a day when I could no longer meet my duties and expectations as Apple’s CEO, I would be the first to let you know,” Jobs said in a company email. “Unfortunately, that day has come.”

But even as Jobs got sicker, he stubbornly maintained his high standards. At the hospital, Jobs went through 67 nurses before finding three that he liked. By October, though, there was nothing more the doctors could do.

On October 5, 2011, Steve Jobs died, surrounded by his family, at his home in Palo Alto, California. The official cause of death was respiratory arrest related to his pancreatic tumor. Later, his biographer would reveal how long he had put off surgery — and how much he regretted that decision.

The Legacy Of A Tech Titan

Though time marched on after Steve Jobs’ death, he left a lingering impression on the world. By 2018, over 2 billion iPhones had been sold — changing how people communicated and lived their lives.

“I’m going to remember him as always being [of] very quick mind,” said Steve Wozniak following Steve Jobs’ death, “and almost all the time that we had discussions about how something should be done in the company, he was almost always right. He had thought it out.”

Indeed, Jobs’ vision for Apple — and the world of technology itself — had led the company to great heights. Exacting, persistent, and confident in his own ideas, Jobs didn’t even accept any market research for the iPad.

“It’s not the consumers’ job to know what they want,” he said. 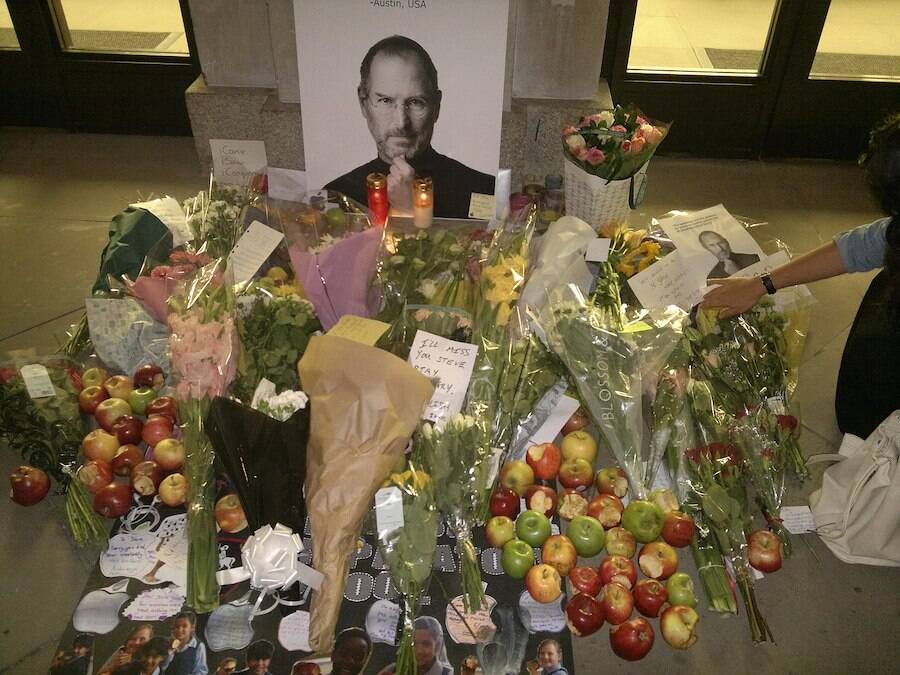 Wikimedia CommonsA tribute to Steve Jobs at an Apple store in London.

But when it came to his own health, Jobs relied on his gut instinct instead of the advice of doctors. He let his cancer spread for nine months before opting for surgery. Some doctors say that this delay is why Steve Jobs died.

One integrative medicine expert said, “He had the only kind of pancreatic cancer that is treatable and curable. He essentially committed suicide.”

By 2010, Steve Jobs knew that he was near the end. And as Steve Jobs’ death approached, his ever-working mind turned to the afterlife.

“Sometimes I’m 50-50 on whether there’s a God,” Jobs told Isaacson during one of their last conversations. “It’s the great mystery we never quite know. But I like to believe there’s an afterlife. I like to believe the accumulated wisdom doesn’t just disappear when you die, but somehow it endures.”

Then, the Apple CEO paused and smiled. “But maybe it’s just like an on/off switch and click — and you’re gone,” he said. “Maybe that’s why I didn’t like putting on/off switches on Apple devices.”