A centuries-old tradition of whale hunting in the Faroe Islands has horrified activists— after more than 1,400 dolphins were slaughtered in one day. 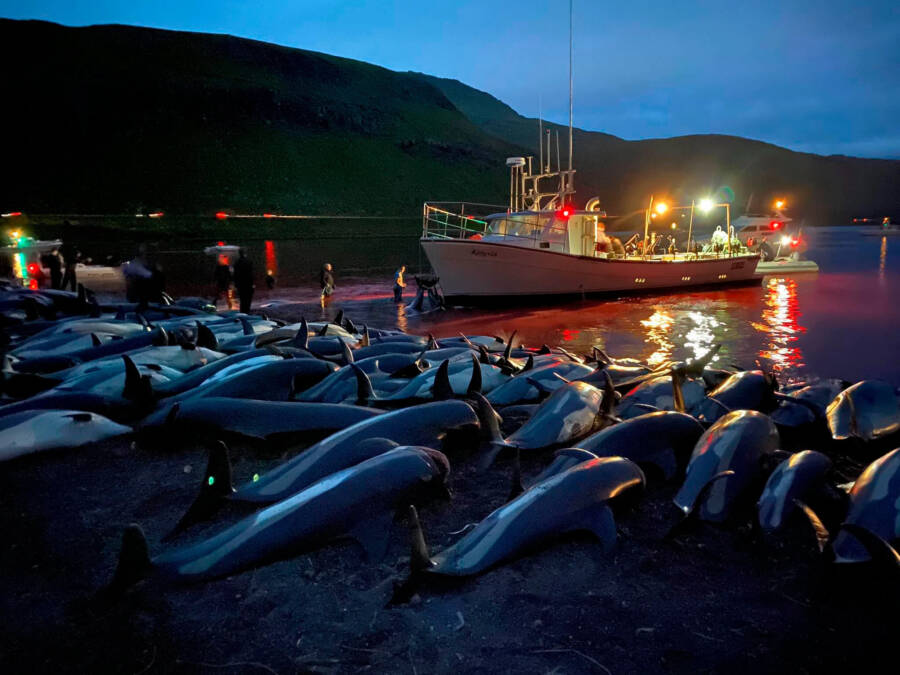 Sea ShepherdLast Sunday, 1,428 Atlantic white-sided dolphins were corralled into a bay and butchered.

On Sept. 12, more than 1,400 dolphins were slaughtered on the shores of Skalabotnur, in Denmark’s Faroe Islands. Whale hunters have gathered there annually in a centuries-long tradition, but it appears that regulations may have been broken this time — resulting in a slaughter that even horrified the locals.

According to The New York Times, the regional custom is known as grindadráp and nurtures the diets of many locals in the Danish territory. A foundational part of the yearly custom is sustainability and humane killing, however, which animal rights groups and many locals claim were nowhere to be found on Sept. 19.

The Sept. 12 hunt proved to be the largest ever recorded in history, with 1,428 dolphins killed in about an hour — then some 50 more in the following days. Hunters corralled the dolphins with motorboats and jet skis onto shore, where they struggled for breath — and there were too few hunters there to quickly end their suffering.

“Considering the times we are in, with a global pandemic and the world coming to a halt, it’s absolutely appalling to see an attack on nature of this scale in the Faroe Islands,” said Alex Cornelissen, the chief executive of the Sea Shepherd Conservation Society, which advocates against whale hunting. 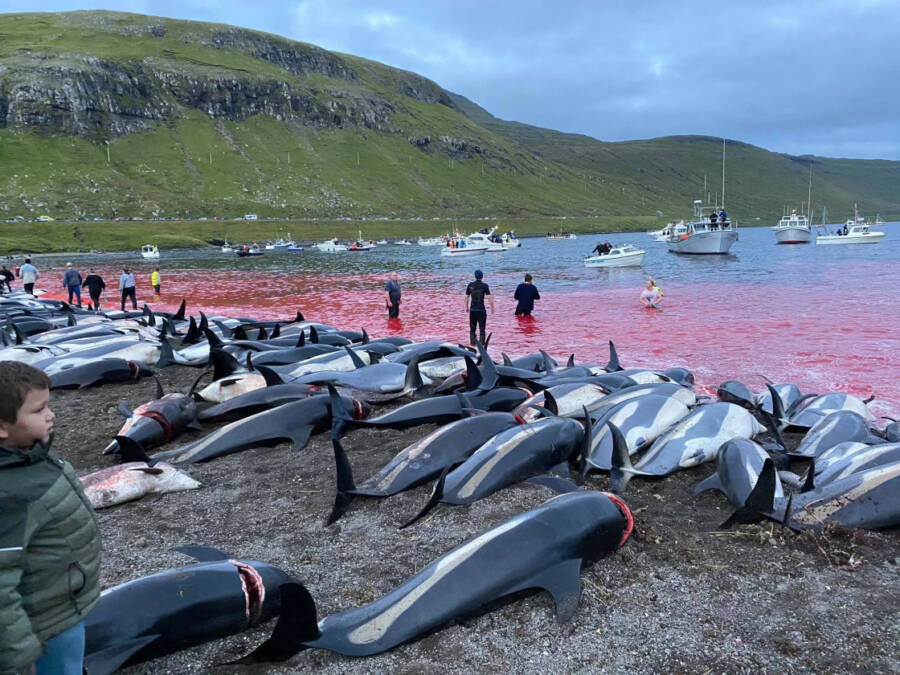 An autonomous territory of the Kingdom of Denmark, the Faroe Islands are a picturesque and pristine part of Europe. According to CNN, they lie in the Atlantic Ocean about halfway between Iceland and Norway.

The tradition of grindadráp typically involves the hunting of pilot whales and the meat eaten by the local population. While long criticized by activists, it has mostly remained undisturbed until last week’s slaughter — which was a bridge too far for many.

“I have experienced that firsthand and also participated a bit,” said Kristian Peterson, a 41-year-old local. “As long as it has been for food only, I have supported it. But this recent catch that was this weekend, I’m against how it went on.” 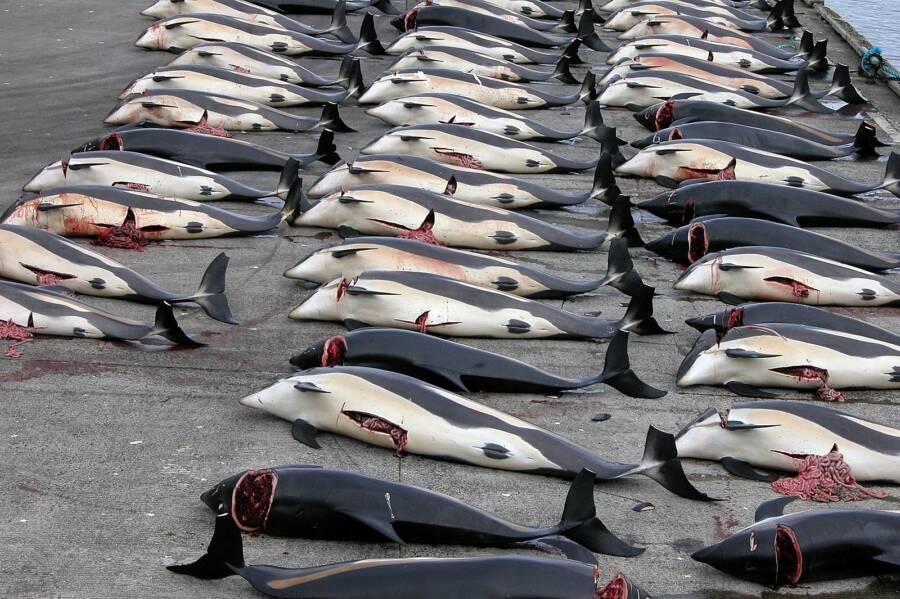 Wikimedia CommonsThe results of a 2006 hunt in Hvalba in the Faroe Islands.

Peterson is part of a substantial chorus claiming that last week’s killing was laden with “so many errors” and unnecessarily prolonged the death of hundreds of dolphins, despite the fact that the Faroe Islands’ own government has long legislated how these hunts should go.

Cemented into regional law in January 2017, the Faroese Executive Order on Hunting Pilot Whales and Other Small Whales firmly states that either a foreman or district administrator must approve any given hunt and has the responsibility to “ensure that enough people are available on shore to kill the whales.”

It appeared as though the local foreman and district administrator of the hunt weren’t aware of these regulations. Sea Shepherd further claimed many of the participating whalers didn’t even have the requisite permit to join. Ultimately, the primary problem appears to have been that not enough killers were present.

Still, government officials have insisted that the hunt was “organized and carried out in accordance with Faroese legislation.” 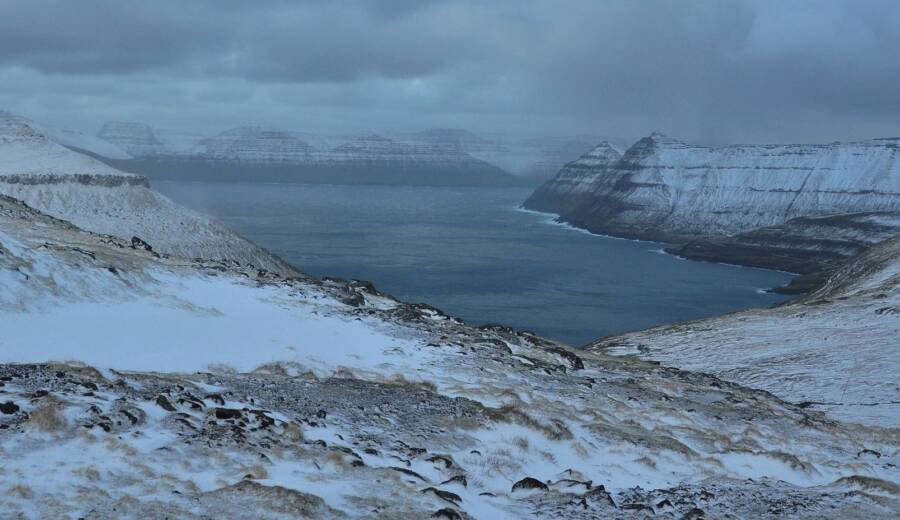 Wikimedia CommonsEysturoy Island, upon whose beaches the slaughter took place.

However, many locals speculated that there was no way a large amount of meat wouldn’t be thrown away after such an enormous slaughter. After all, the September hunt resulted in more dead dolphins in one hour than total marine mammals are usually killed in an entire year in the region.

On the other hand, one local 61-year-old fisherman named Steintór thought that the horror and outrage were overreactions.

“I think it’s very necessary to kill whales,” he said. “And we do it in a very human way, using veterinarian-certified tools. The problem in the Faroe Islands is that we have a public slaughterhouse. So everyone can see what is going on.”

There’s a chance, however, that the hunt may come under legislative scrutiny again, according to Páll Nolsøe, a spokesperson for the Faeroe Islands’ Ministry of Foreign Affairs and Culture. Admitting that the slaughter was “exceptionally large,” he said that officials may consider putting limits on how many dolphins can be hunted, according to NBC News.