The 2.7 square mile country called Liberland was just founded and its ruler is modeling his politics on the Tea Party movement. 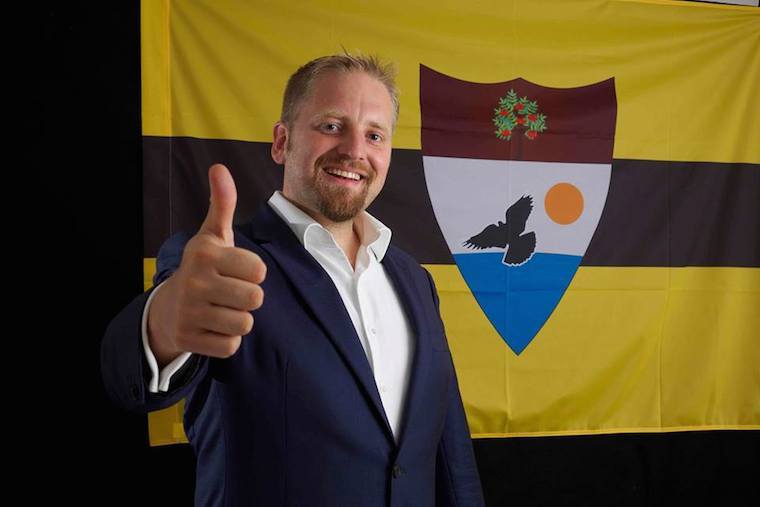 Vít Jedlička wasn’t happy with his home country, the Czech Republic, so he decided to start his own. He searched the world high and low for the perfect spot, and found it in a small piece of terra-nullius (no-man’s land) between Croatia and Serbia. He called his scant, 2.7-square mile (7 square kilometers) kingdom Liberland. On April 13th of this year, Jedlička arrived in Liberland with his girlfriend and a childhood friend, put down a flag and claimed the territory.

The euro-skeptic, who still presides over the libertarian-leaning Free Citizens Party in the Czech Republic, spoke exclusively with ATI on the six-month anniversary of Liberland’s founding.

A demilitarized zone with “outsourced prisons” where everybody can carry a gun and marry whomever they want, but where the microstate will not offer any type of public education or health, Liberland has just launched its new coin – called the merit – and the leadership professes admiration for the United States’ Tea Party movement.

How did all this get started?

From a very early age I was trying to push for more freedom around me. I spent a lot of time fighting for that in my country, the Czech Republic, but that was not fruitful. The old system was very complicated and it seemed too hard to change anything, so I thought it would be much easier to create a new country than to reform an old one.

You founded Liberland on April 13th, the birthday of Thomas Jefferson, one of the founders of the United States. Are you planning to keep this date as the national day of Liberland?

Yes, definitely. It will be our national day, and we are planning a festival as well.

Which other things from the American system would you like to implement in Liberland?

The general ideas of the American Revolution and the Tea Party are quite similar to what we are doing now in Liberland. We are very much inspired from the old American system, as it was working, and we would like to learn from what has been done in the US.

You have received around 400,000 citizenship applications. Are you going to accept every petition, or will only the best candidates who fulfill the requirements get it?

We are planning to use the British system, where the country sells citizenship for one million pounds. We will accept any form of energy, where people can help us with their time or connections and get points for that, or otherwise they can just donate to Liberland and receive our money for it.

Is there a minimum amount of donation established for citizenship?

Have you started accepting any applications already?

Yes, the system is four days old so we just very recently started the merit system. Note: This conversation happened on the 12th of October, 2015.

In order to get citizenship, is it mandatory to move to Liberland?

Not really, but if you want to receive the citizenship you need to at least make a visit to the state.

How many citizens do you plan to have in, for example, the first five years of existence?

You put a flag on no man’s land and proclaimed a new country. How have Croatia and Serbia reacted?

Serbia is extremely supportive of our efforts, whatever we need they support us, they help us, and that is very good. Croatia is providing a great deal of help by actually making sure the borders are safe, and that if somebody is found crossing from Croatia into Liberland they are arrested for illegally crossing the Schengen Border, which reminds us that this piece of land is not Croatia.

Note: The Schengen Area, established in 1995 by the European Union, is the international territory of 26 European countries that allow for free travel and transportation of goods without customs or passport control between their borders.

Talking about nation building, I am sure you are planning a lot of infrastructure. What does Liberland plan to have as a country?

We plan to support the creation of an international airport 8 km. away from Liberland, which is on the Serbia side; it’s one of the military airports that got destroyed during the war. We want to try to turn it into an international airport, and we also plan to do some power plants projects meanwhile, to have a source of energy for the nation.

As for budget and taxation. You now have 7 sq. km (2.7 sq. miles), and you accept donations, but you need to build a country. Can you explain how you plan to do it or what will be your main taxation system, if you have one?

We are not going to build things. People will be able to crowdfund for whatever they want to build. I think this is a better way than taxation.

How about public buildings?

We just want one public building, it will be built from this only house that is there on the property now, which has been abandoned for 30 years. 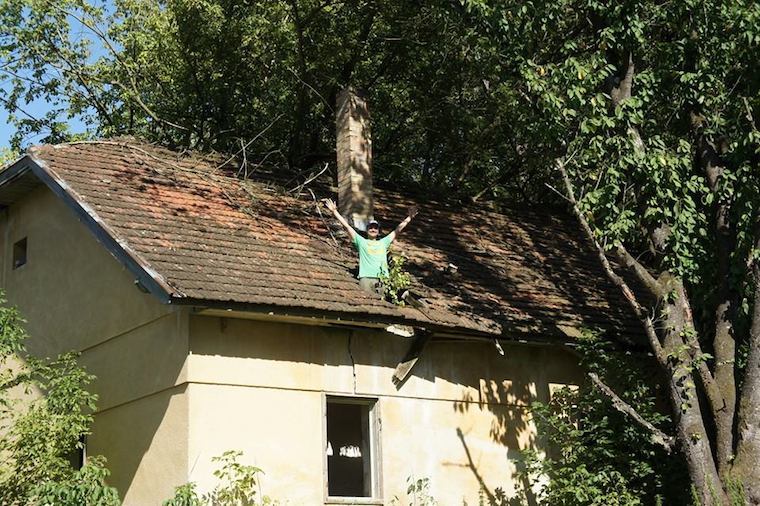 The building Mr. Jedlička refers to as the only public building in the land. Image Source: Liberland Press Office

What are your international goals with Liberland. Do you intend to enter the European Union, NATO or the UN?

Not really, the European Union has 180,000 pages of regulations, so that would really spoil our dream of having a country without that many regulations. They have taxes on everything, and that is incompatible with our idea of minimum taxation.

Do you have any barriers for private or non-governmental organizations to have an office in Liberland?

No, we can have the office of the UN, for example. Just like Switzerland, which was not part of the UN for many years and was its headquarters. We would also like to not get involved in these big intergovernmental organizations directly, but rather indirectly.

Which coin do you aim to use?

When do you plan to have people move to Liberland?

Whenever we can make it a decent place to live. I hope it would be by next year, maybe during September, this is something we already planned for, so we have one extra year to make sure that our legal system is ready and we are able to provide security for this area and that we have already made all the important deals with Croatia.

I plan to move there as soon as possible, hopefully during the summer next year.

Let’s talk about justice. One of the punishments you plan to implement in the case of a crime, for example, burglary, is extradition. Do you plan to extradite somebody from their own country if they are citizens?

Yes, that we can do. It’s something encouraged by the international community, to get rid of a citizen if he commits such a crime that he deserves such a punishment.

Do you plan to have any prisons?

We plan to use prisons externally, so we would outsource prisons, we would not have prisons. We would find the best prisons around the world and our people would be able to pay back for whatever they have done.

Have you been in touch with other countries about this issue?

This is very premature to discuss. Not yet, but there are so many countries that offer such a thing; there are some pretty good prisons actually in Russia.

How about human rights, do you have any views already on gender rights, LGBT, women’s rights, etc., that you would like to comment on?

Definitely. We are making sure, for example, that government cannot do anything about any laws except on diplomacy, security, and justice. That means that the government will not be able to do any laws on marriage, so there will not be any laws about whether or not gay marriage should be legal or not.

So everybody would be able to get married in Liberland, right?

Yes, exactly, the state would not be able to do anything about that. And there would not be any gay lobby. Anybody can marry anybody. There will be some institution to do that, like the church, but we will not care about it at all.

You have previously talked about a demilitarized place. How about a police force?

We will have sheriffs. We have some new innovative ideas: anybody who would be interested on providing security could sign and provide security. And this is true for everything: everybody will be able to apply to any job within the government.

Do you plan those sheriffs to be armed or unarmed?

Sure, armed. They wouldn’t be able to provide much protection if they didn’t carry arms at least.

How do you plan to import those guns? Are those people going to be allowed to carry weapons at all times?

We really would like to have freedom for the people in that sense, they would be able to carry guns.

Let’s move to healthcare. All healthcare is going to be private?

How about people who cannot afford it?

We want [the] state to be absolutely out of this area.

And if somebody cannot afford it, is the state of Liberland going to help?

No, that is a task for the church to help out, we are not going to be involved in that. 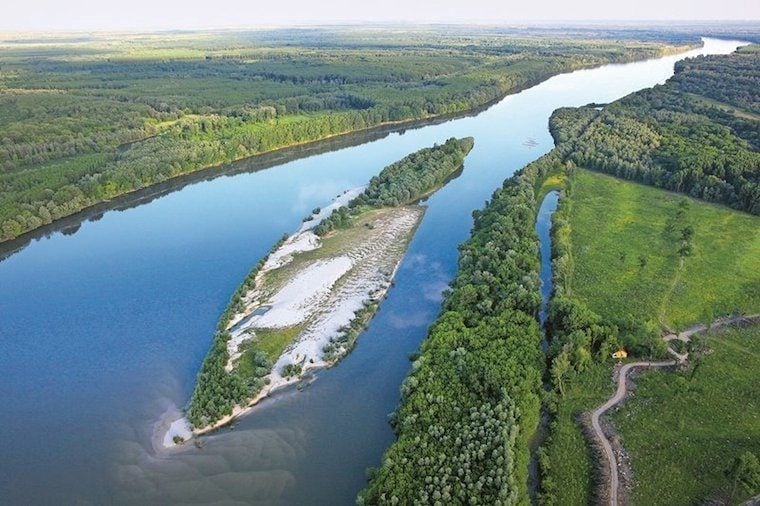 So you are not going to get involved at all in homelessness, welfare, or any social services?

Not really. We are thinking that the church is much better than the state for that. The social security system is very wasteful.

And if there is no church and all you get in Liberland are atheists or agnostics?

That’s very unlikely, you should see the applications. More than half of the people have some religion.

And they are all aiming to build a church there?

I don’t know, I am not going to influence. [The] people who move into Liberland …would be wealthy, because freedom brings prosperity, they will not like to see other people die on the streets, so that’s why they will donate to church.

So let’s think of the following scenario: there is one private hospital in Liberland, and somebody who can normally afford regular healthcare gets very sick with an awful illness that is very expensive. It’s not only the homeless who cannot afford healthcare. What do you do?

They can do crowdfunding as you see it in the US, this is actually a value for society. They can tell their story and get help.

With that, we concluded our interview with Mr. Jedlička. Genius or circus manager, he claims to be in informal conversations with more than 10 heads of state and to have functional representation in more than 40 countries. As you read, applications are open if you are ready to make the move.