"What images do they see? Dead Indians to the left and African Americans to the right in bondage." 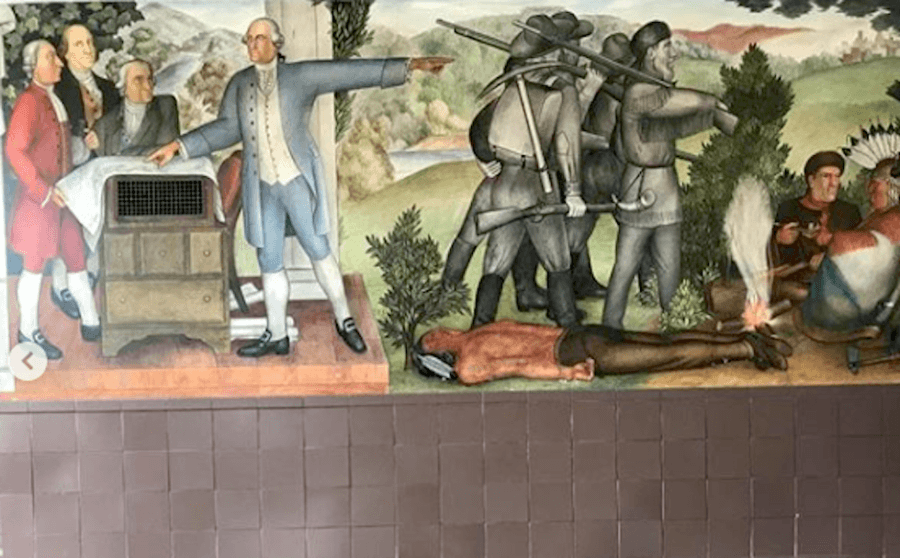 solomamihood/InstagramA majority of a school board in San Francisco voted to remove the “Life Of Washington” mural commissioned in the 1930s.

In the hallways of George Washington High School in San Francisco stands a 1,600-square-foot mural painting of the school’s namesake. The mural depicts scenes from America’s past, offering various scenes specifically from Washington’s own life.

But some scenes in the painting show the ugly side of American history as well, including one of a black slave toiling away at the behest of Washington. Another scene, which has garnered the most attention, depicts a white colonizer standing over a slain Native American, a stark metaphor for the ruthless genocide that occurred when European colonists came to the continent.

The violent depiction has prompted heavy debate among school members and the community at large about what should be done about the massive painting. Many have pushed for the display to be removed from the school walls.

According to the San Francisco Chronicle, a majority of school board members voted to have the mural removed last week. The endeavor will likely take years to complete and could run up costs up to $845,000 to accomplish.

Despite the decision over the mural being already made, a larger discussion over whether the painting’s removal continues.

Some say that covering the mural would be a form of artistic censorship and would hide the historical violence that was perpetrated toward Native Americans and African Americans. Others argue that the atrocities in the mural painting do nothing but cause pain for minority students that come from the very communities in the painting.

The 13-panel 1936 fresco painting is known as the “Life of Washington” mural. It was commissioned to Russian artist Victor Arnautoff, who migrated to the United States from Russia to study at the San Francisco Art Institute and was part of the Works Progress Administration (WPA) public art program under President Franklin Roosevelt. The program was meant to offer relief for the unemployed during the Great Depression.

When determining the purpose of the mural, it is best to consider the original intent of the painter himself. Arnautoff was a known communist and worked under the tutelage of famed mural artist Diego Rivera, known for his social justice-oriented artwork.

It is clear that Arnautoff’s intention was to criticize America’s first president over his personal reliance on slavery and the country’s brutality against indigenous peoples. The basis of Arnautoff’s critique has prompted many from the creative community to defend the painting against its impending removal.

Leslie Correll, a 1961 class graduate who knew Arnautoff through her father, is one of its defenders.

“This mural was meant to correct the whitewashed — in both senses of the word — textbooks of the time that remained whitewashed until recent times,” Correll said. She did, however, add that a “big issue” for her was the fact that those defending the mural were not on the same side as those who were affected by it.

On the more extreme end of the pro-mural argument, some have even likened the painting’s removal to Nazism.

“We don’t burn great art. It is unconscionable,” said Richard Walker, the director of the Living New Deal Project that documents art from the WPA program. “It’s something reactionaries do, fascists, it’s something the Nazis did, something we learned from history is not acceptable.” 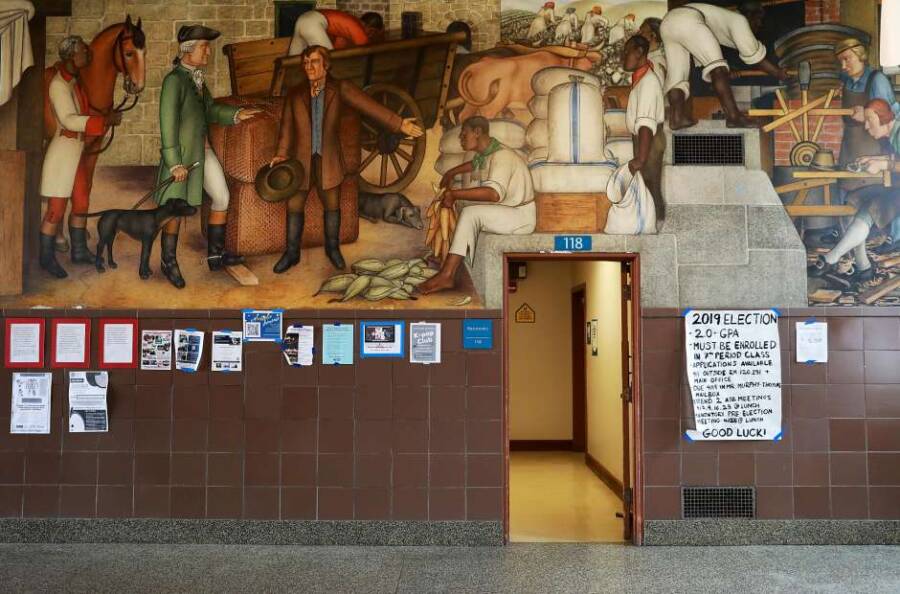 Tammy Aramian/Washington High School Alumni AssociationThe mural’s removal could take years to complete and cost the school district up to $845,000.

While Arnautoff’s intentions were groundbreaking for his time, what conversations surrounding reparations for oppressed communities often forget is the experience of those who are directly affected, as professor Joely Proudfit points out.

“Think of all the families, the children who have walked through there,” said Proudfit, who is a professor of American Indian Studies at California State University.

“What images do they see? Dead Indians to the left and African Americans to the right in bondage.”

In the 1960s, students lobbied to have the murals removed or covered up, but a compromise was reached where African-American artist Dewey Crumpler painted “response” murals depicting Latinos, Native Americans, Asian-Americans and African-Americans overcoming oppression and displaying empowerment.

Crumpler recently spoke, captured in the YouTube video below, in support of Arnautoff’s murals, saying “History is full of discomfort, but that’s the very thing that human beings need to ensure change. Because what would change be if we only saw the positive aspects of human nature and not the full breadth of it?”

The removal of the mural follows a series of efforts that the city and state have been recently making. In September of last year, city officials removed a 2,000-pound, bronze statue of a Native American at the feet of a Catholic missionary.

And earlier this month, California Governor Gavin Newsom issued an official apology through an executive order for the “systemic slaughter” of Native Americans.

If anything, these efforts show that there are a myriad of ways to correct history that don’t involve inflicting more harm against marginalized communities.

As for the vacant space that will be left open by the controversial mural, Proudfit believes that the situation is an opportunity to have a piece of art that uplifts these marginalized communities rather than remind them of their suffering.

“Let’s make new frescoes,” she said. “To me, the reparation there would be allowing for the First Nation and first people be heard for once.”

Next, read the story behind Keith Haring’s original ‘Crack Is Whack’ mural. Then, take a look at 55 photos from the height of San Francisco’s hippie power in the 1960s.