While metals that are malleable and conductive have already been discovered, this particular discovery provides a whole new world of potential uses for the tech industry. 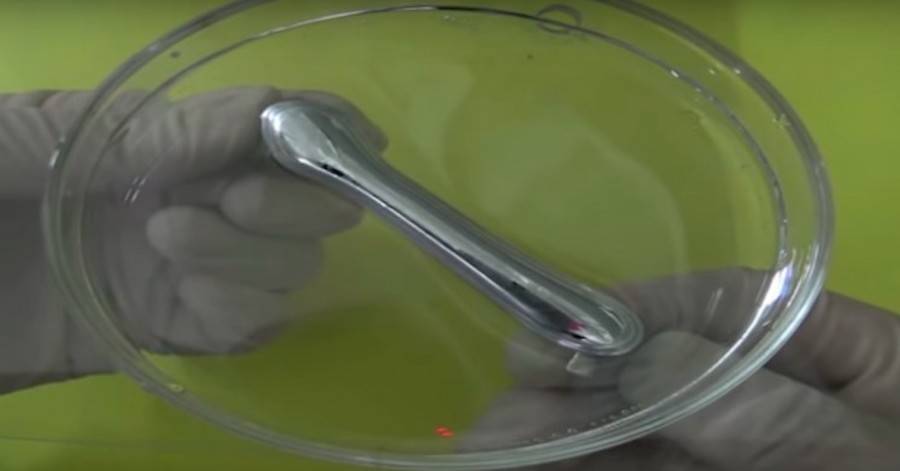 Some of the most rewarding technological breakthroughs are made when life imitates art. In this case, scientists from Beihang University in China managed to create a highly malleable, magnetic liquid metal seemingly right out of a Terminator movie.

According to Interesting Engineering, details of the achievement have been published in the Applied Materials & Interfaces journal, which detail in depth the metal’s conductive, magnetic, and potentially industry-altering properties.

The liquid metal material can be manipulated with magnets and essentially twisted and pulled in any number of ways. For the modern tech industry’s current focus on nanotechnologies and soft robotics, the advent of this new metal — which is highly conductive and doesn’t easily break apart — has more large-scale ramifications than its mere visual appeal might convey.

“The seemingly contrary properties, the good stretchability, and the mechanic strength for three-dimensional (3D) stretch…can be precisely, conveniently, and contactlessly controlled by the magnetic field provided by permanent magnets,” the report read.

Footage of the liquid metal.

In order to arrive at this simultaneously conductive, malleable, and magnetic state, Beihang University researchers needed to find the exact kind of alloy that would allow for these seemingly contrary properties.

While metals that are liquid at room temperature have high conductivity and are easily manipulated have already been discovered, they usually have a high surface tension which can typically only be manipulated on a horizontal plane. On top of that, they need to be submerged in a liquid to prevent the metal from drying up during movement.

Beihang University researchers Liang Hu and Jing Liu were eager to develop a liquid metal that wouldn’t be bound by these limitations and instead create a synthetic material capable of operating more liberally. 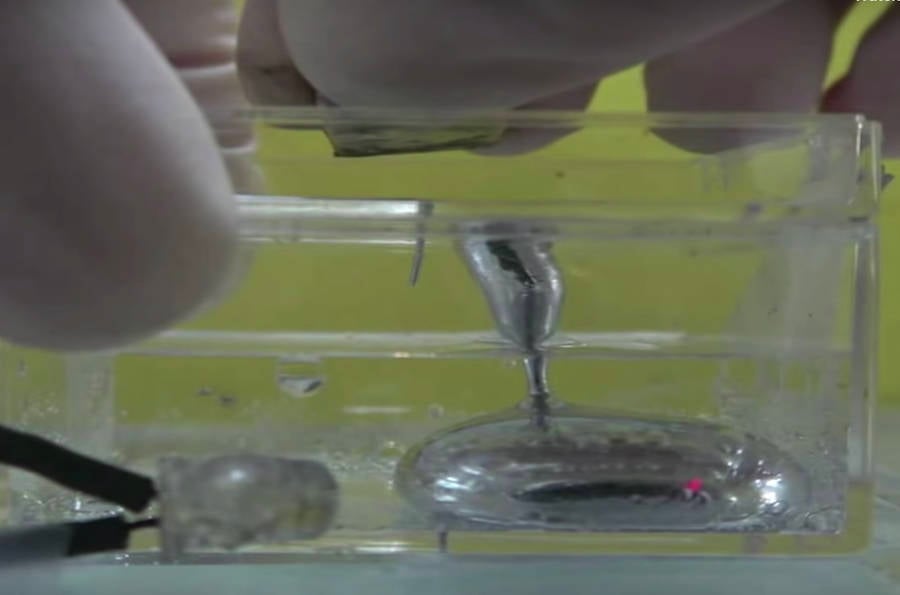 ACS Publications/YouTubeA scientist manipulating part of the liquid metal by moving a magnet around.

The team began by submerging a gallium, indium, and tin alloy in hydrochloric acid and then adding iron particles to it. This created a gallium oxide layer on the droplet’s surface, which then lowered the liquid metal’s surface tension, which was key in creating a substance that could be magnetically manipulated without being broken in half. The team knew they’d achieved the right amount of tension when they applied two magnets to the material and could pull it in two directions at the same time.

The research group even managed to stretch the droplet of liquid metal to nearly four times its resting length and found that its conductivity was high enough to power an LED bulb merely by connecting it to a regular circuit.

This material was also capable of bypassing the usual need to submerge it in liquid for its conductivity to function — it merely needed one electrode to be submerged in hydrochloric acid to do so, with another capable of being freely exposed to the air. This means that the material could move both vertically and horizontally — a first, for this kind of conductive, magnetic, liquid metal.

Perhaps most notable, besides the obvious potential of a malleable, magnetic, liquid metal, was the removal of the restraint requiring submersion. By developing a metal that has all of these properties, but doesn’t need to be contained in liquid creates a whole new landscape of design choices.

Next up, read about the Chinese province of 5.8 million people that ran on renewable energy for an entire week. Then, learn about the Australian deep-sea investigation that discovered remarkable marine life.