Photo Of The Day: The Glorious Rise And Tragic Fall Of A World Record Mustache 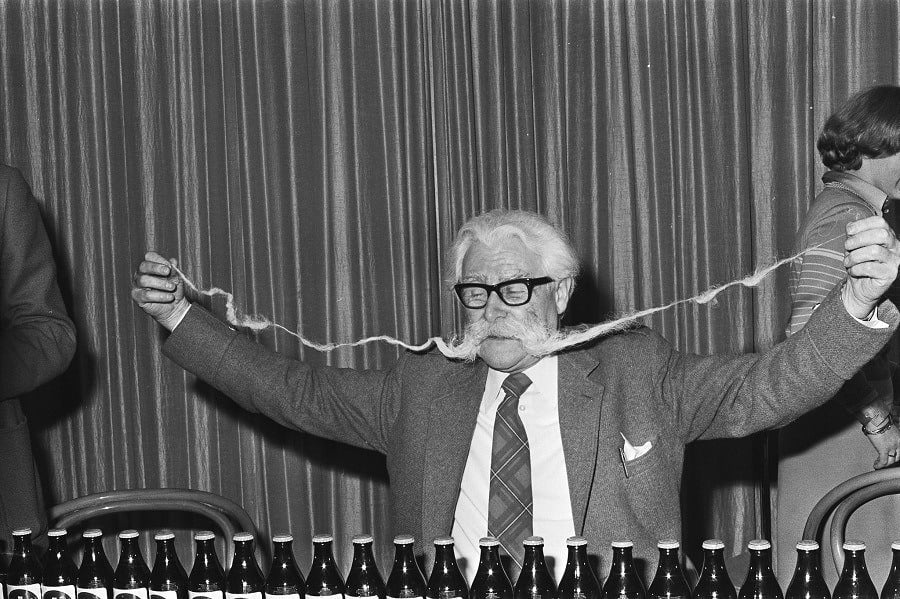 John Roy getting his mustache measured in 1977 for Guinness World Records.

Everything old is new again: For proof, take a stroll through a Brooklyn street or peek into any major college campus and check out the abundance of facial hair. Yet no matter how hard people try to bring the mustache back, they will never meet the bar set by Scotsman John Roy, the former record-holder for the longest mustache of all time.

Roy would have been notable even without his record-breaking ‘stache, as he was a descendent of the notorious Scottish highwayman Rob Roy. Known as the Scottish Robin Hood, the outlaw was featured in Sir Walter Scott’s novel Rob Roy as well as numerous poems by William Wordsworth.

John Roy, a pub landlord, had a more law-abiding occupation than his ancestor, but he certainly bested the swashbuckling Scottish folk hero — and every other man then alive — with his mustache, which measured at just over five feet long.

By 1977, when Roy was being measured for Guinness World Records, his mustache had already built up a name for itself. In 1949, Roy won London’s Handlebar Club Cup. The Handlebar Club itself is a terrific resource for some of history’s most impressive whiskers, but not even its members could handle the grandiosity of John Roy’s enormous lip sweater.

Most present-day World Beard and Moustache Championship competitors still have nothing on Roy, and it’s doubtful Roy would have guessed his mustache would still be in conversation more than 40 years after he entered the record books. As for what he would have made of the glitter beard fad, we can only guess.

Unfortunately, Roy also couldn’t predict the fragility of upper lip hair. His mustache broke off while he was in the bath in 1984. Then in 2010, a man named Ram Singh Chauhan came along and blew Roy’s record out of the water with his even longer mustache, which measured an incredible — and somewhat creepy — 14 feet long.