Why should you consider maggot therapy? Well, it might make you sick in the stomach, but it will heal your infected wound.

Your gross wound is a maggot’s favorite meal. But, did you know that a maggots’ appetite for diseased flesh has medical benefits? Called maggot therapy, it could be the thing that saves your life.

In this bizarre medical treatment, hungry disinfected maggots remove dead and infected tissue. After being placed on the infected area, the maggots go to town eating and cleaning, as they only have a taste for rotting flesh.

Keep reading it gets better.

The direct killing of bacteria by maggots has shown to be most beneficial in lacerations or surgical wounds that haven’t healed properly, as well as severe ulcers.

Using maggots for medical purposes isn’t a new thing. Forms of maggot therapy were used for hundreds of years. For example, William Baer was an orthopedic surgeon during World War I. He noticed that when hurt soldiers came to the hospital after being left out on the battlefield for days, thus attracting maggots to their flesh wounds, the soldiers tended to survive injuries that usually caused death or worse diseases. Baer than began using maggot therapy purposefully in his treatments.

When antibiotics came into the picture in the 1940s, maggot therapy went out of style for some reason.

But, just like fashion goes in and out of vogue, maggot therapy has been making a resurgence. In recent decades, the rise of antibiotic-resistant bacteria caused doctors to seek alternative forms of treatment. Enter maggot therapy. After a team at the Leiden University Medical Center in the Netherlands did a study involving multiple experiments, they found that maggot therapy not only helped to heal wounds, but it healed wounds faster.

In 2004, the U.S. Food and Drug Administration even approved maggot therapy as a prescription treatment.

Maggots have a bad rep. But one could argue that that ultimately comes down to what may be considered a branding problem. Try thinking of the grunge and goo they’re associated with as a soothing cream, healing a badly infected cut. 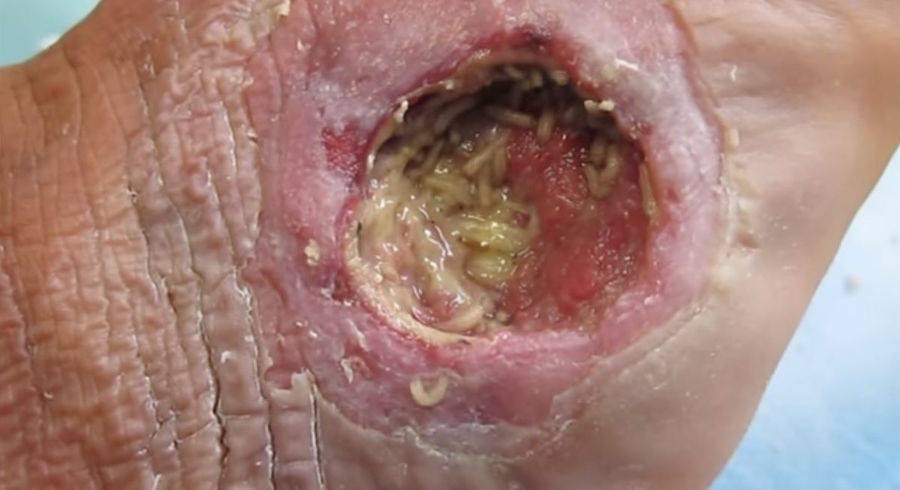 Wikimedia CommonsThe use of maggot therapy on a wounded foot.

In a video, National Geographic covered the story of Cindy Kennedy. Kennedy, a diabetic, was left with a gaping wound after surgery that contained green and black flesh. Conventional procedures were causing her too much pain, but without treatment, the infection could have spread and lead to death. So she decided to try out maggot therapy at the Wesley Medical Center in Kansas.

Maggots are a known natural cleaning device, as confirmed by Terence McDonald, the doctor who prescribed the maggot therapy to Kennedy. “Not only do they remove the dead tissue which removes the food source for the bacteria, then their saliva has antibacterial effects,” said McDonald.

If the maggot therapy worked, Cindy could see her wound heal and eliminate the possibility of needing another surgery to have it removed.

The maggots used were specially bred at wound care facilities. Seven-hundred live maggots were placed in her wound, where they fed for two days. During those two days, they grew five times in size.

At first, Kennedy was not particularly keen on the idea of having maggots feast on her tissues. “That is gross,” she said. Though she added, “but they say it really gets the job done. I’m willing to try anything.”

Once the 48 hours were up, the remaining tissue was all a healthy pink.

Yes, the process involved in maggot therapy is as gross as it sounds. Okay, probably grosser. So if you’re dealing with an infected wound that won’t heal, should you give maggot therapy a go? Well, there is some concrete science on its side. So the decision partially depends on whether you have an open mind. And a strong stomach.

If you’re not too grossed out already, you can next read about the most disgusting parasites that can infect your body. Then learn about the bizarre medical practice of urine therapy.