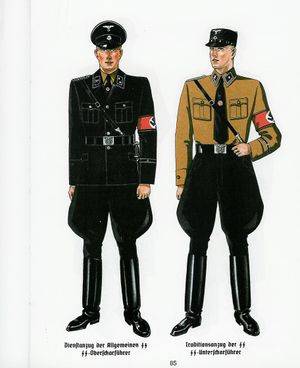 In 1931, two years before the Nazi Party took control of the German government, Hugo Boss started his fashion label in Metzingen, Germany.

Even before then, Boss had numbered among Germany’s Nazi collaborators, producing early Nazi uniforms in a factory he’d bought in 1924.

However, it was in 1931 when Boss went from being merely the owner of a factory that counted the Nazis among their clients to a Nazi himself when he officially joined the party. Boss also became a sponsoring member of the Schutzstaffel (SS), the Nazis’ paramilitary wing, making monthly donations to the organization.

With his early membership in the party, Boss gained much under the Nazi leadership of Germany.

Though the label did not design the iconic black SS uniforms for which it is often credited, it did manufacture numerous other uniforms for the Nazi regime.

It was then that the company began to use the slave labor of concentration camp victims in order to produce the large orders that they were receiving at that time.

The company used around 140 people from concentration camps to work in their factories, along with another 40 French prisoners of war.

One former slave at a Hugo Boss factory, Jan Kondak, who was forced to work in the factory from 1942 to 1945, recalls, “In the barracks there were lice and fleas.”

Many in these factories were worked to death or eventually sent to Auschwitz and Buchenwald to be killed.

After the war, Boss was classified as an “activist” and a “supporter and beneficiary of National Socialism.” In 1946, he was fined and stripped of his right to own a company.

After Boss’ death in 1948, the company would continue to live on under his son-in-law, Eugen Holy. Nowadays, Hugo Boss is a major luxury fashion house, selling high-end clothing and accessories around the world.

In 1999, the company finally agreed to contribute to a fund that compensated former forced laborers.