Has "America First" violence changed all that much over the last century? 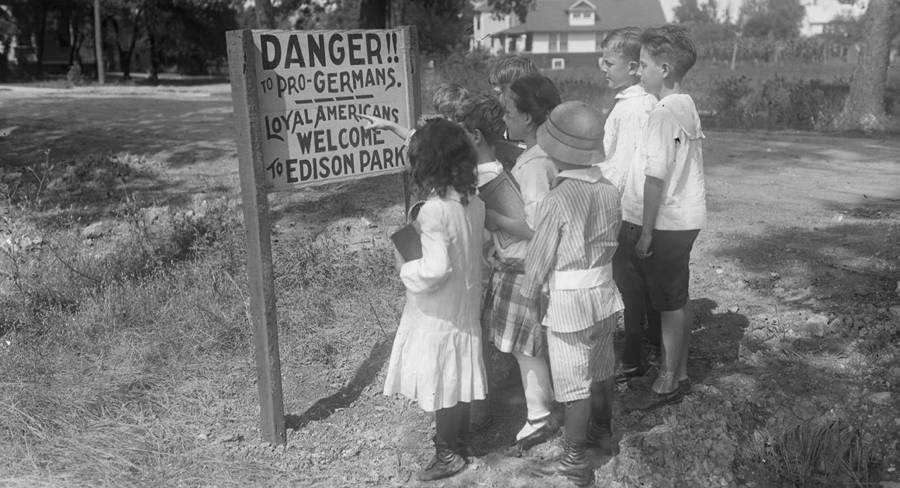 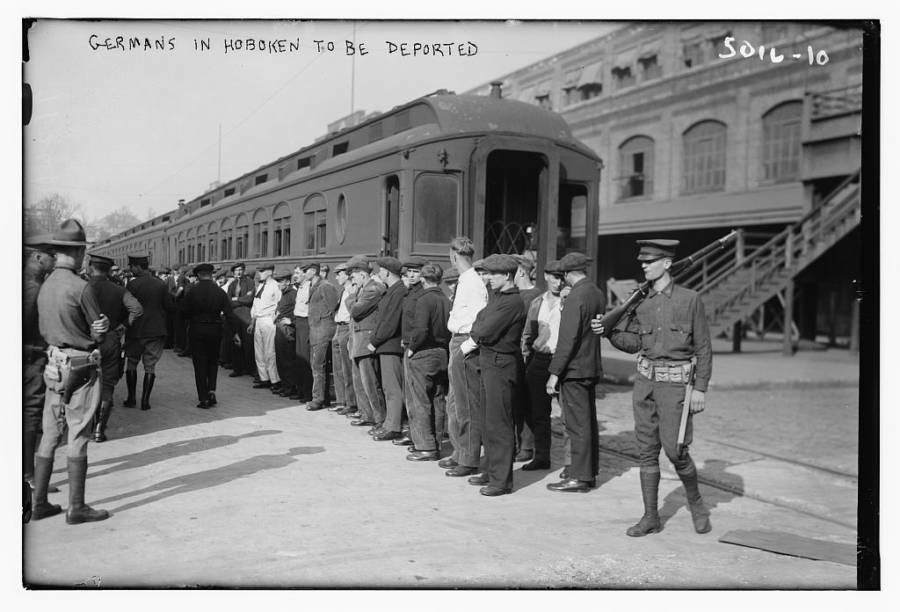 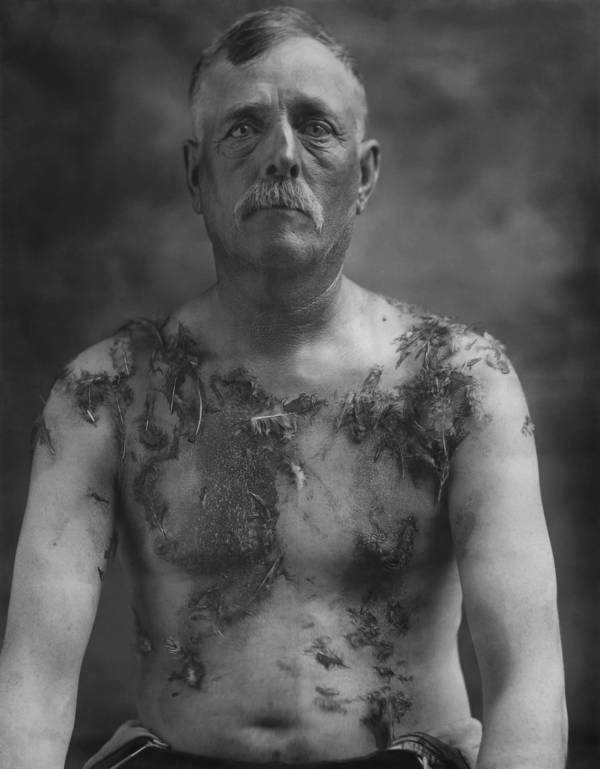 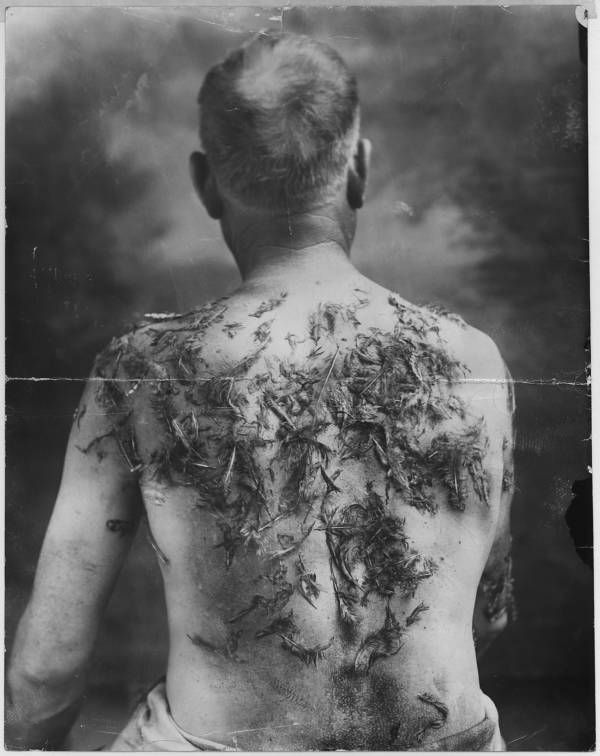 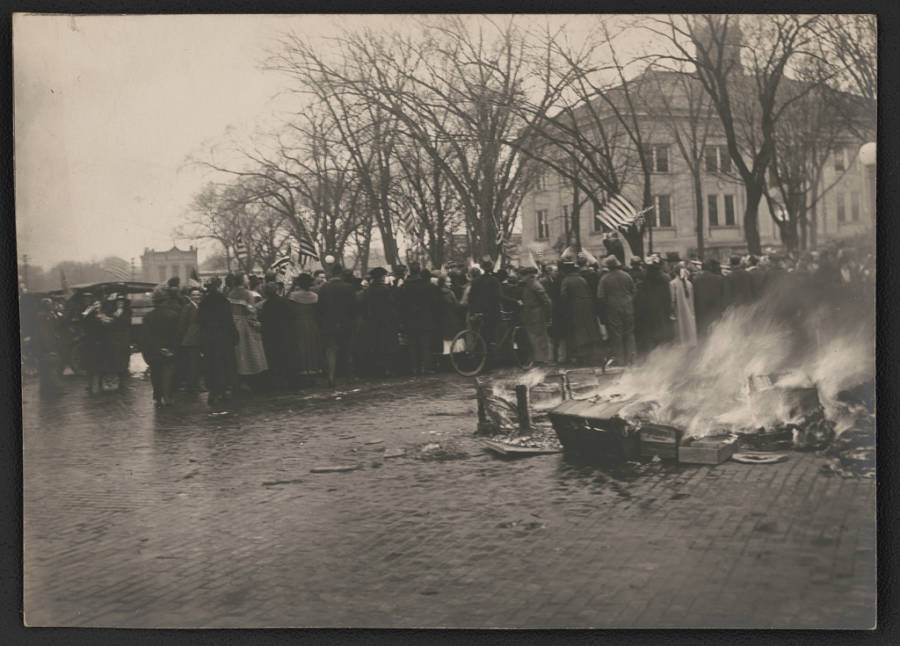 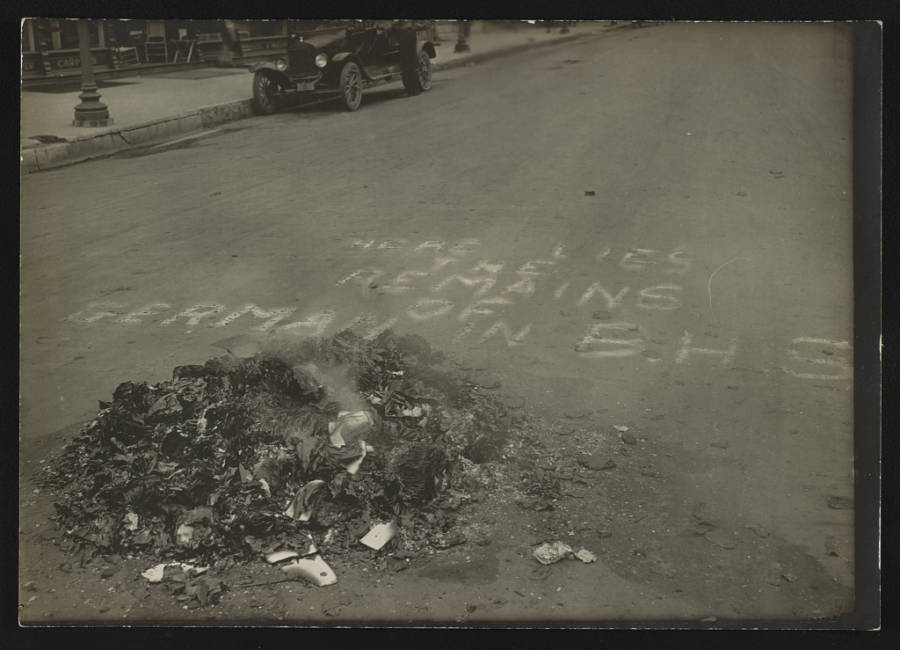 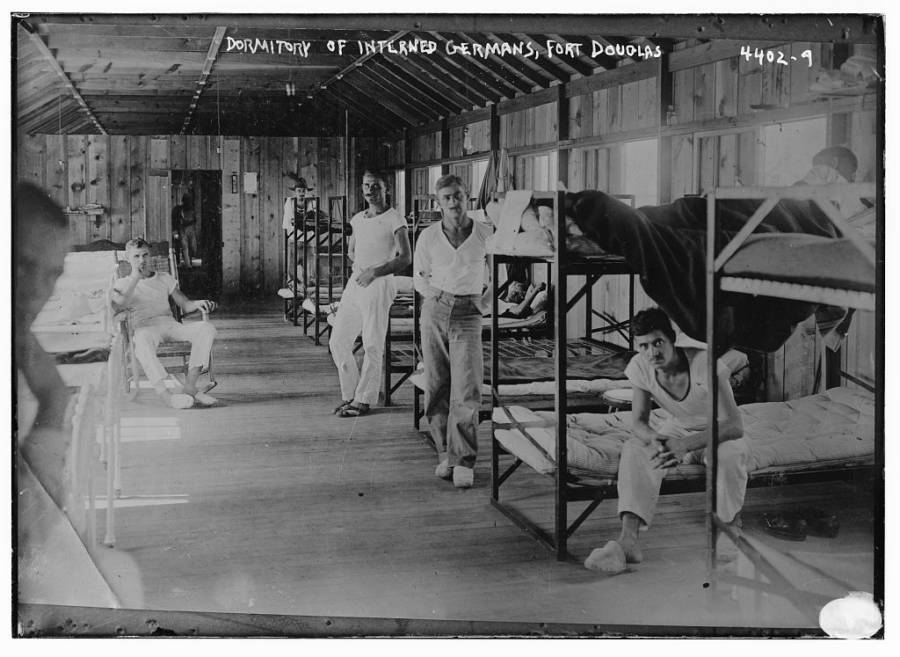 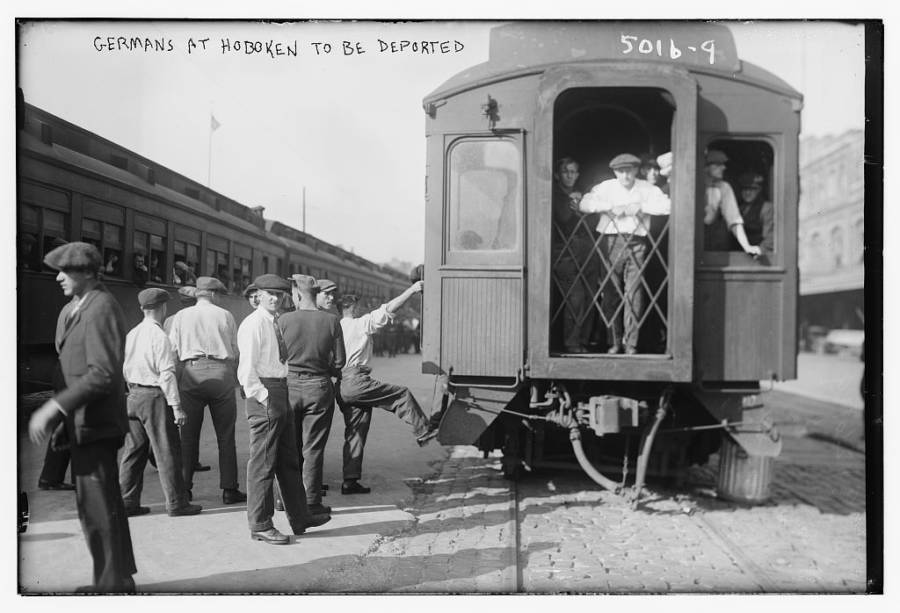 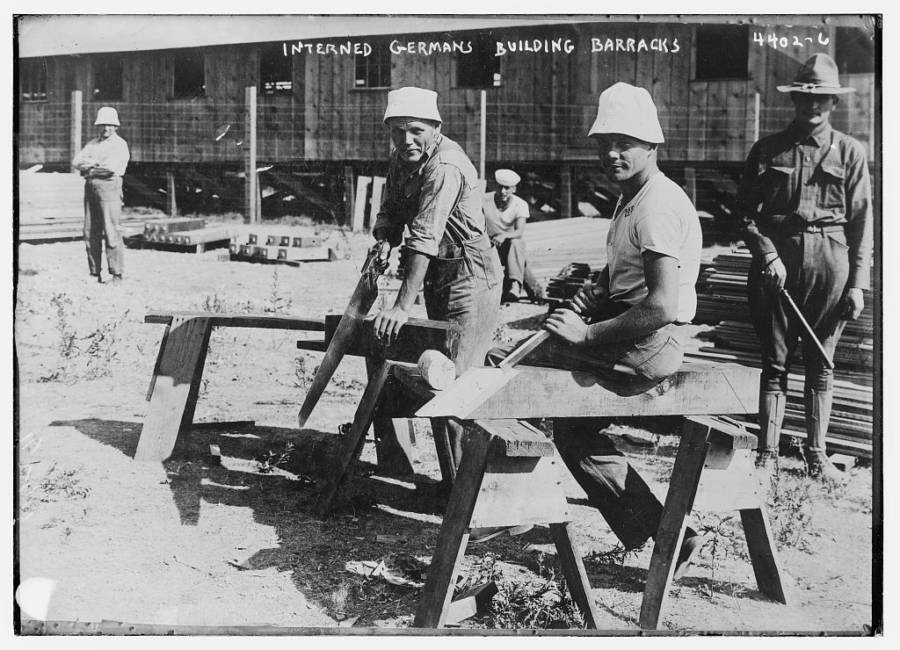 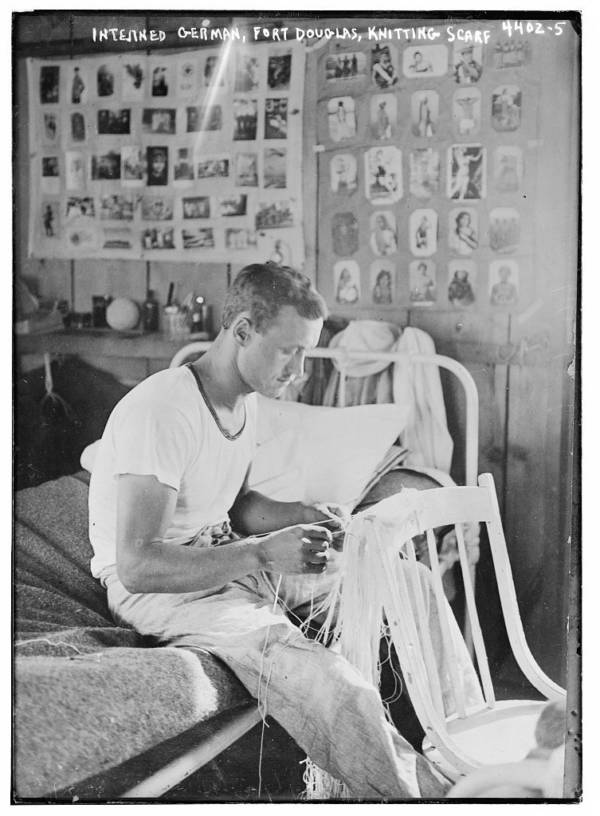 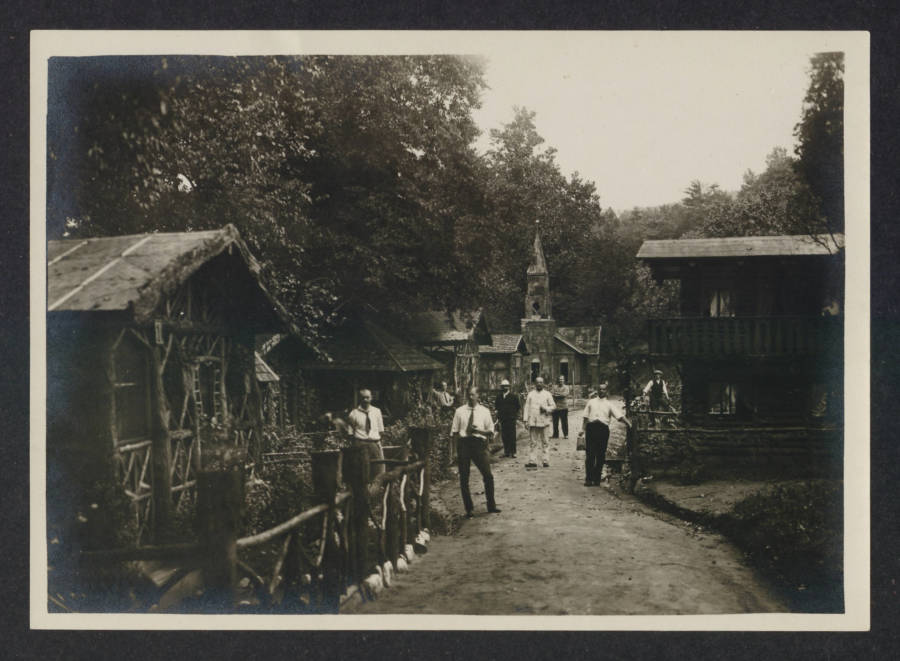 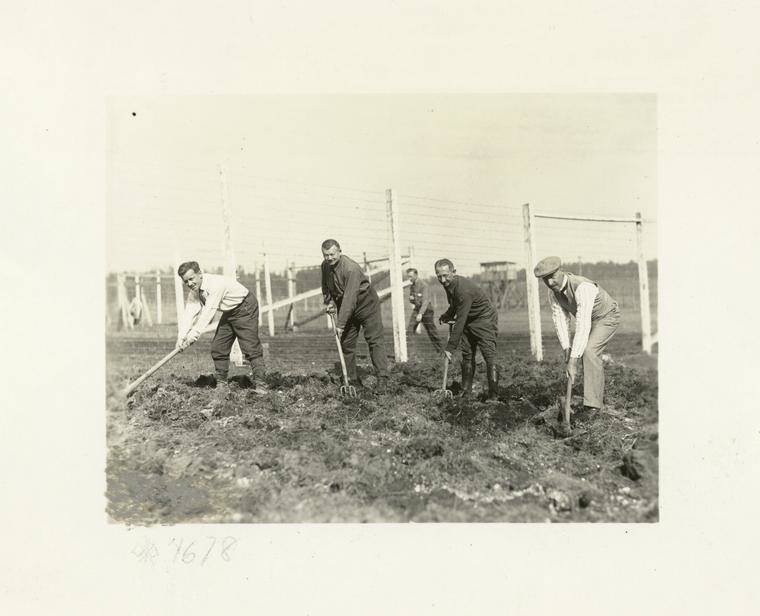 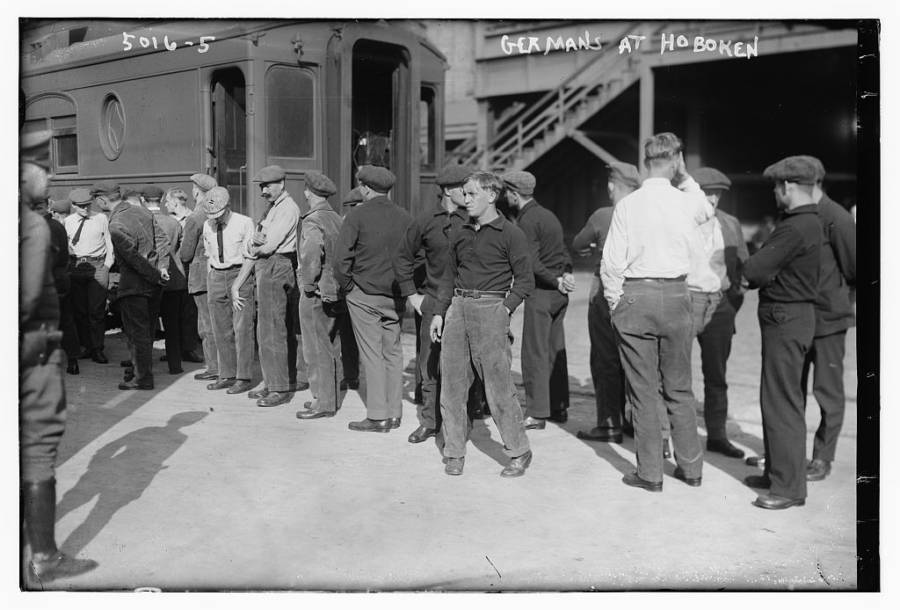 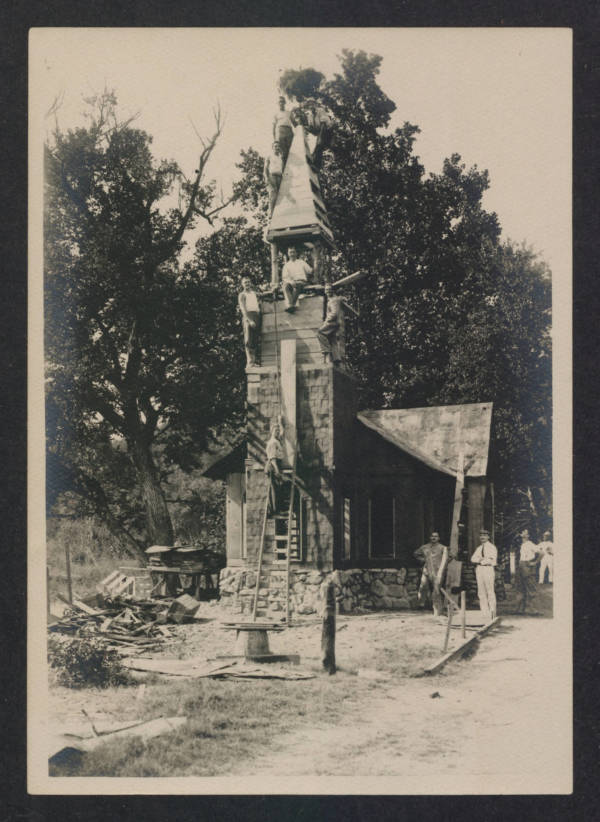 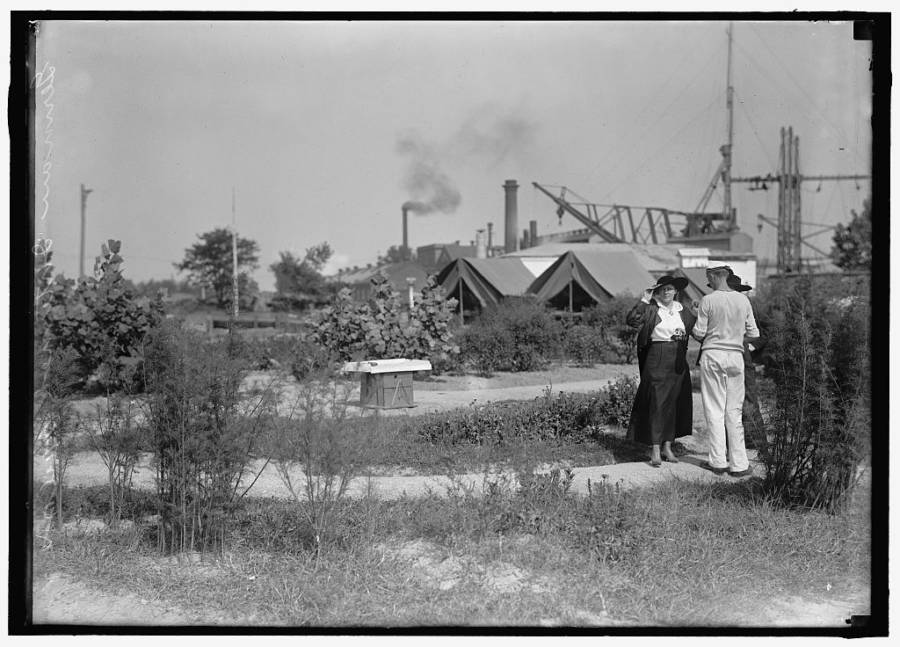 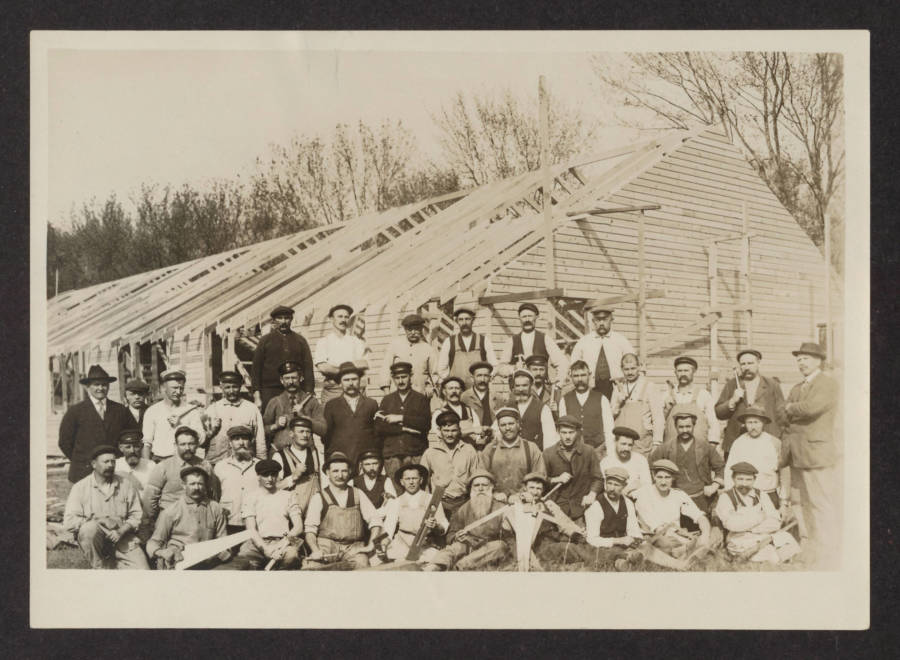 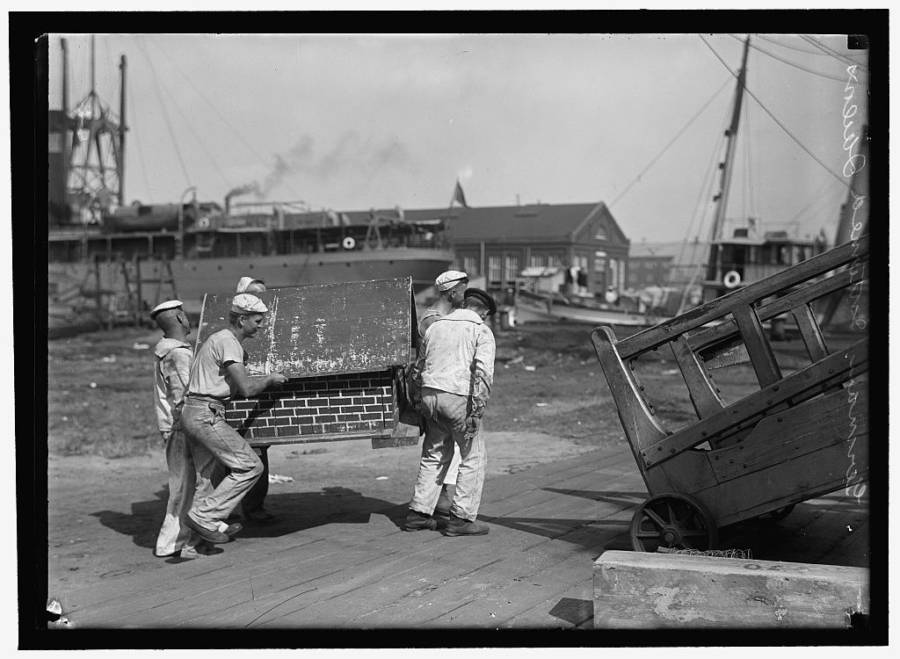 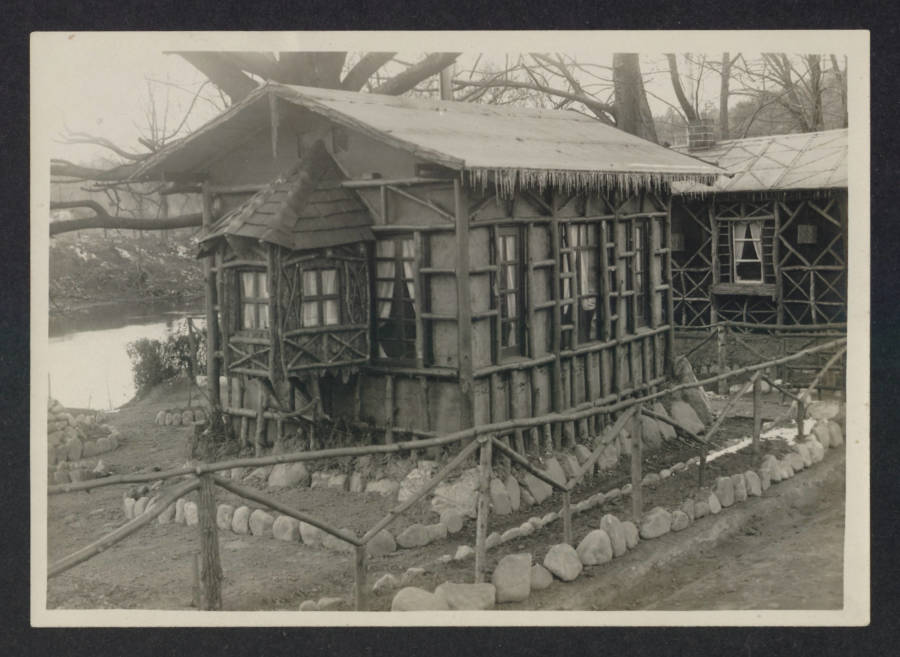 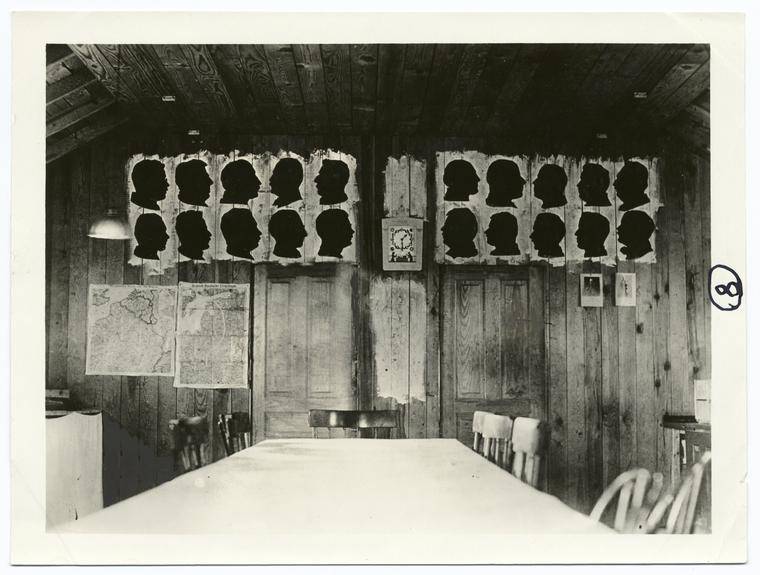 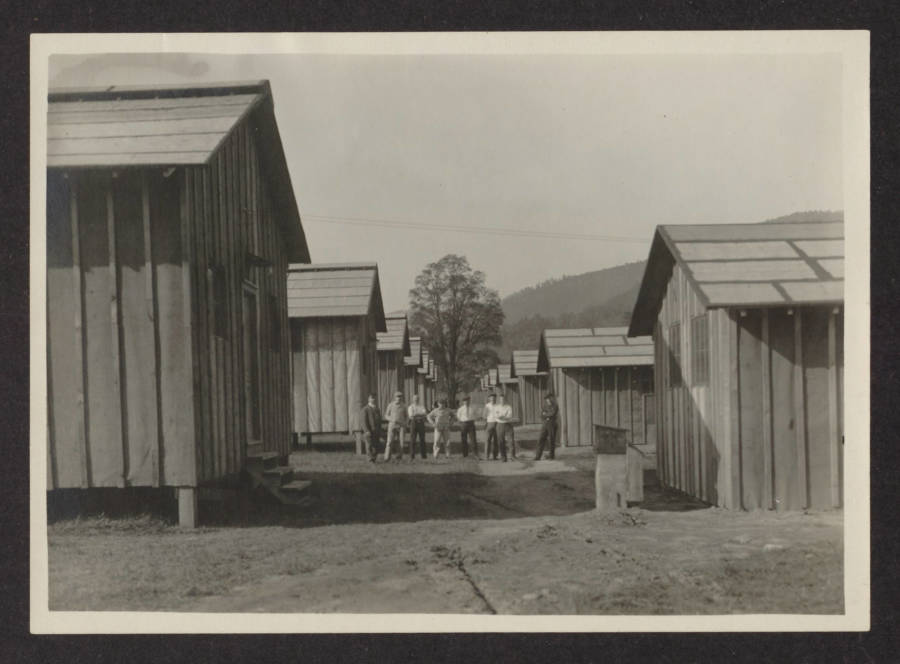 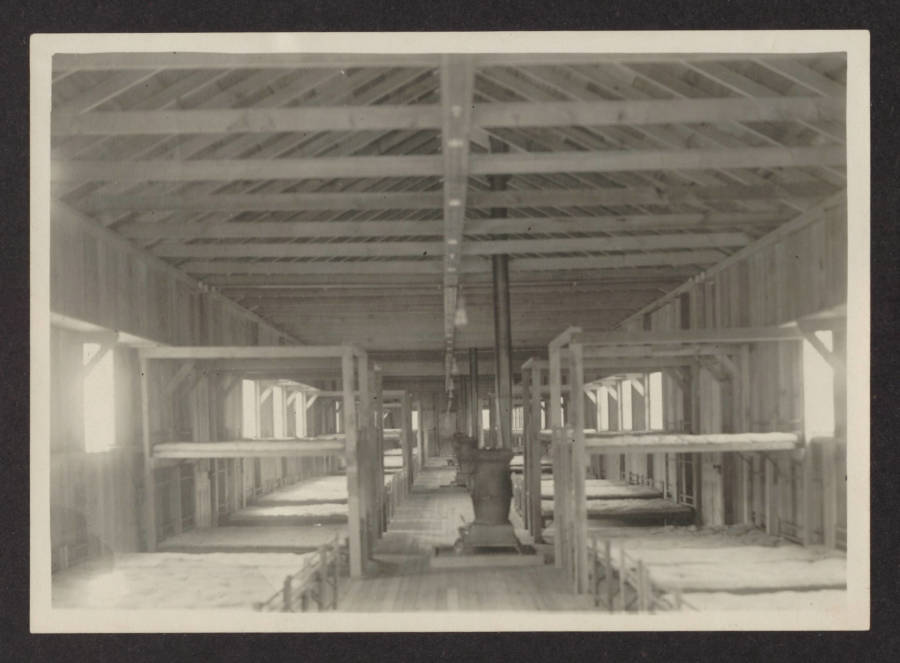 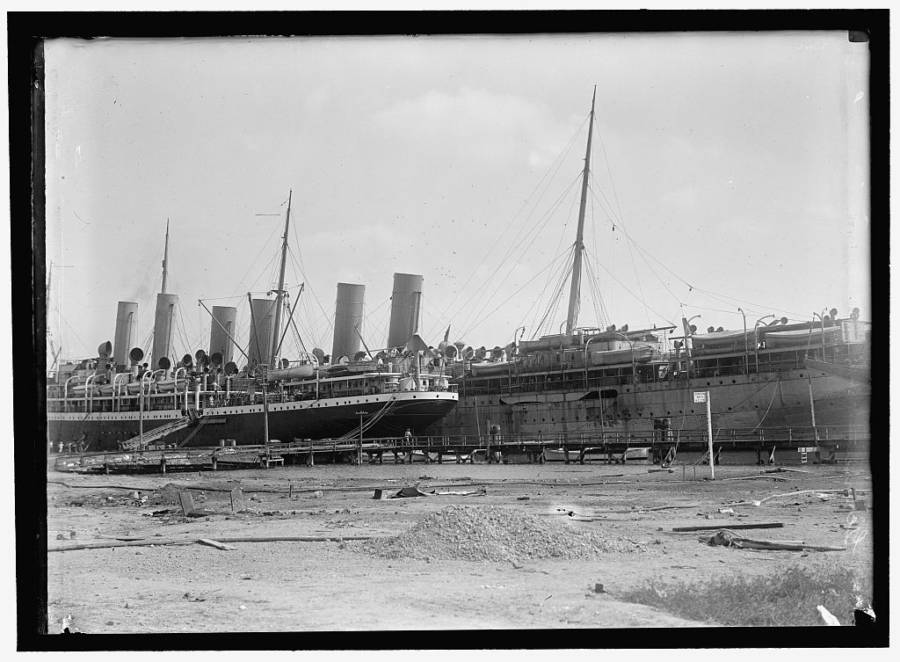 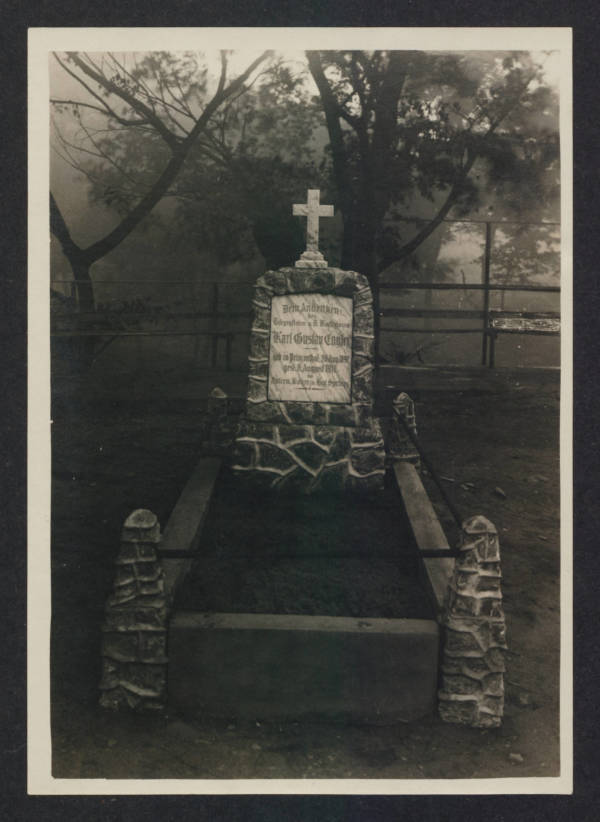 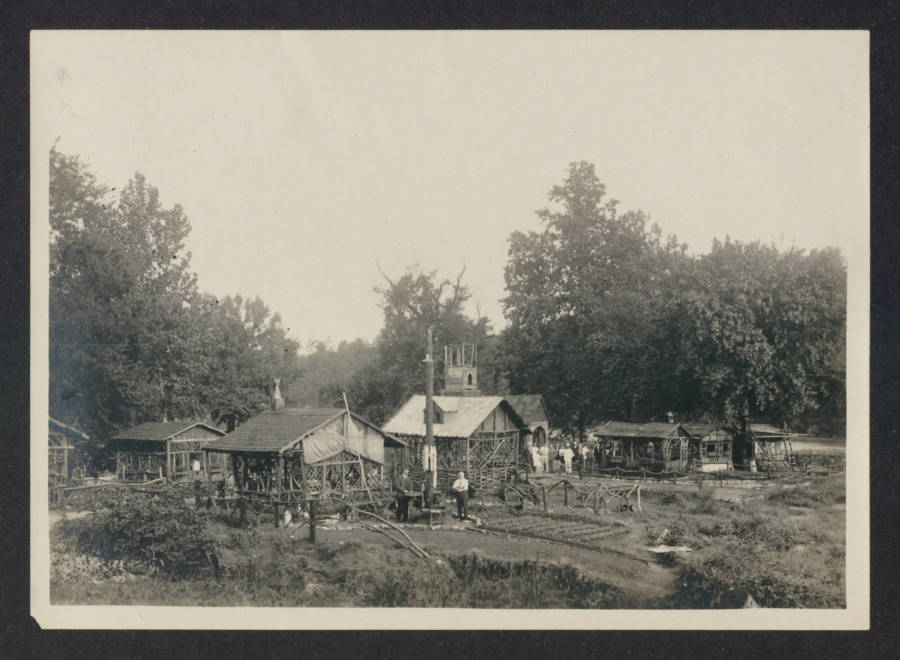 1 of 25
German-American children are stopped on their way to the park by a sign that reads: "DANGER!! To Pro-Germans --- Loyal Americans Welcome to Edison Park."

Chicago, Illinois. 1917.Wikimedia Commons
2 of 25
German-Americans, after years of being forced to live in internment camps, are forcibly deported from the United States and sent to Germany.

Hoboken, New Jersey. September 25, 1919.Library of Congress
3 of 25
German-American farmer John Meints after being attacked, tarred and feathered by a group of masked men.

Meints was targeted because his attackers believed that he had not bought war bonds.

Luverne, Minnesota. August 19, 1918.Wikimedia Commons
5 of 25
A crowd gathers for a book burning. They watch as the faculty of Baraboo High School set every German-language book they own on fire.

Above the ashes are written the words: "Here lies the remains of German in B.H.S."

Baraboo, Wisconsin. 1918.Library of Congress
7 of 25
The dormitory inside of a German-American interment camp.

Fort Douglas, Utah. Circa 1915-1920.Library of Congress
8 of 25
German-Americans peer out the back of the train as they are forcibly deported from the country.

Hoboken, New Jersey. September 25, 1919.Library of Congress
9 of 25
Interned Germans are forced to build the barracks for their own internment camp.

Location unspecified. Circa 1915-1920.Library of Congress
10 of 25
A German-American in an internment camp tries to pass the time until the war is over and he is allowed to return to his life.

Fort Douglas, Utah. Circa 1915-1920.Library of Congress
11 of 25
German-American prisoners peer out from the doorways of the new homes they have built for themselves.

Oglethorpe, Georgia. February 8, 1918.New York Public Library
13 of 25
German-Americans, shortly after being freed from their internment camps, line up for a train. They are not going home — they are going to be forced out of the country and sent back to Germany.

Hot Springs, North Carolina. 1917.State Archives of North Carolina
15 of 25
Tents are set up for German sailors, who will be forced to live in an internment camp until the war is over.

Location unspecified. 1917.Library of Congress
16 of 25
German prisoners hold tools while they work on building the camp they have been forced to live in.

Hot Springs, North Carolina. 1917.State Archives of North Carolina
17 of 25
These men are actually German soldiers. In a stranger story, they ended up staying in America by choice, afraid that they would be destroyed by the British Navy if they returned to Europe. They were ultimately sent into internment camps along with the German-Americans.

Portsmouth, Virginia. 1916.Library of Congress
18 of 25
A ramshackle house built by German-American prisoners inside of an internment camp.

Hot Springs, North Carolina. 1917.State Archives of North Carolina
19 of 25
Silhouettes of interned German-Americans who, according to the camp, are the "most prominent and noted propagandists" living in the United States.

Fort Oglethorp, Georgia. Circa 1915-1920.New York Public Library
20 of 25
The barracks inside of a German internment camp.

The men in the center of the photo are both the camp's prisoners and its builders.

Hot Springs, North Carolina. 1917.State Archives of North Carolina
21 of 25
The inside of a internment camp barracks. Families would be forced to live in these tight quarters. In many cases, this would be their home for the next three years.

Any and all German-owned ships were captured by the American government after the U.S. entered the war. 54 merchant vessels were taken in and 1,800 sailors were sent to internment camps, purely because they had German last names.

Location unspecified. 1916.Library of Congress
23 of 25
The grave of an internment camp prisoner who died behind the barbwire of the camp and never saw his home again.

Hot Springs, North Carolina. 1917.State Archives of North Carolina
24 of 25
A distant view of the German-American village set up inside of an internment camp. As World War I spread across Europe, the people of the United States started to worry. They were afraid of the massive German-led threat growing on the other side of the world. And with no way to lash out against it, a lot of them just took their fear out on the German-Americans who lived right next door.

It’s not a part of history that Americans like to talk about, but the country was completely changed by the fear and paranoia that swept from coast to coast during the so-called Great War.

Before the war broke out, however, German was the second most widely spoken language in America. There were more than 100 million first and second-generation German-Americans living in the United States, with many of them involved in the thousands of German organizations across the country. They spoke German in their churches and sent their children to German-language schools.

And their neighbors embraced them. In 1915, 25 percent of all American high school students were happily studying the German language. They accepted their neighbors — until the war began and Germany was the enemy of the Allies abroad. And, soon, even the American government was calling on its people to reject their German-American neighbors.

German-Americans, President Woodrow Wilson declared, were to be treated as “alien-enemies.” If they wanted to be accepted in American society, they would have to throw their German identity away.

“Any man who carries a hyphen about with him,” the president told the nation, “carries a dagger that he is ready to plunge into the vitals of this Republic when he gets ready."

This change in public opinion was terrifying. People didn’t even want to mention Germany anymore. Restaurants started selling hamburgers as “liberty sandwiches” and sauerkraut as “liberty cabbage.” Thousands lost their jobs and countless more stopped speaking German. One group even demanded that every American school stop teaching the language, declaring that German was “not a fit language to teach clean and pure American boys and girls.”

Worse yet, violence broke out — violence egged on by the government. The American ambassador to Germany, James W. Gerard, told the public that, if any German-American didn’t support the war movement, “there is only one thing to do with them. And that is to hog-tie them, give them back the wooden shoes and the rags they landed in, and ship them back to the Fatherland.”

People took his advice. A mob in Minnesota, for example, tarred and feathered a German-American man named John Meints in August 1918 on the grounds that he hadn’t bought war bonds. And another mob in Illinois attacked a man named Robert Prager in April 1918 because they were convinced that he was a German spy — and took things much further.

The mob stripped Robert Prager naked, tied a rope around his neck, and paraded down the main street of Collinsville, Illinois. As Prager walked, they smashed beer bottles before his bare feet and forced him to sing as he walked on shards of broken glass.

Prager begged for his life, insisting he was a proud American — but they killed him anyway. The mob hung him three times. “Once for the red,” they chanted, “once for the white,” and “once for the blue.”

A court tried to convict the mob for Prager’s murder, but all were acquitted and the town felt no pity. “The city does not miss him,” the Collinsville newspaper wrote after Prager’s death. “The lesson of his death has had a wholesome effect on the Germanists of Collinsville and the rest of the nation."

While some German-Americans were attacked, thousands more were sent to internment camps. President Wilson barred all German-Americans from living near military facilities, airports, port towns, or the capitol. He forced every German-American to get fingerprinted and registered and sent them into camps across the country, locked in like prisoners of war.

Even when the fighting ended in late 1918, many weren’t sent free. Some camps were still full of people until 1920.

The impact was tremendous. By the end of the war, less than one percent of American high schools still taught the German language. Countless people had stopped speaking their native language, with many changing their names to keep from standing out as German-Americans.

A unique hybrid culture was almost entirely stamped out — purely out of fear of a threat that was thousands of miles away.

Next, see what life was like inside the Japanese internment camps of World War II. Then, see some of the most powerful World War I photos ever taken.