In 1917, Dutch exotic dancer Mata Hari was executed by the French for working with the Germans. But her apparent role as a double agent remains unclear to this day.

Many have heard of Mata Hari, the famous exotic dancer who supposedly became a lethal wartime spy. But few know exactly which parts of her fascinating story are fact and which parts are fiction.

What we do know is that Hari was well-traveled and fluent in several different languages. And during World War I, her romantic exploits with soldiers landed her in a web of espionage so tangled that not even her fame could save her. 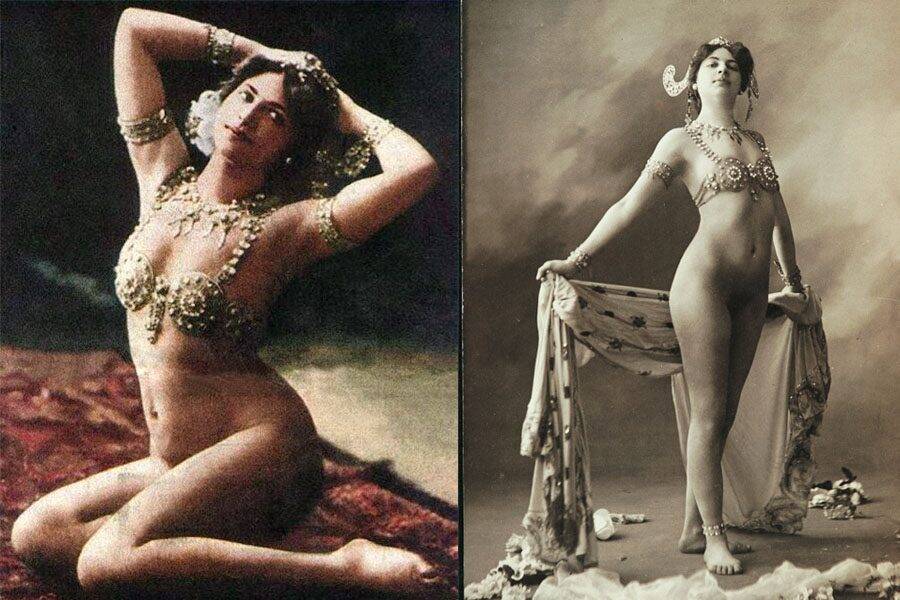 In 2017, the French government finally declassified the so-called “Mata Hari papers” — trial archives that were kept secret for an entire century. And around that same time, a cache of Hari’s personal letters was also released.

But in many ways, this has only deepened the mystery.

The Early Life Of Mata Hari 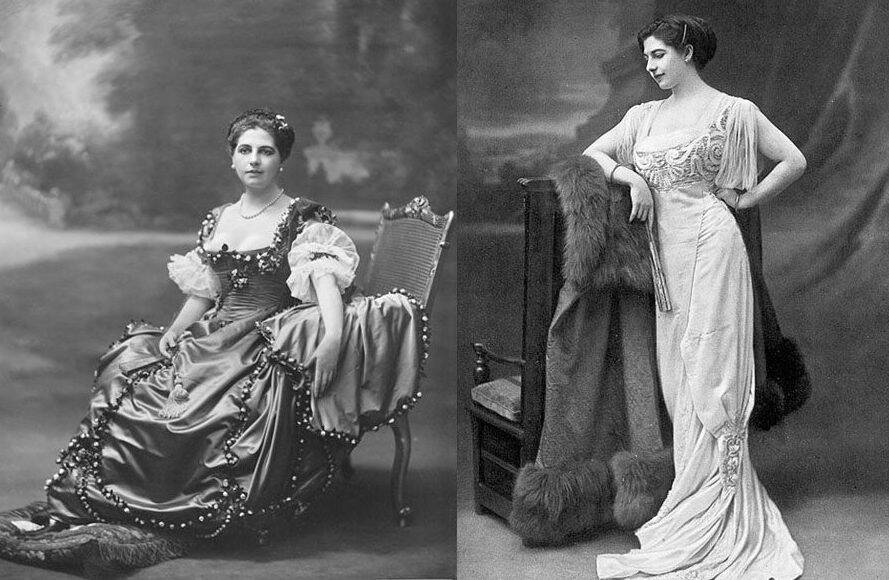 Wikimedia CommonsAlong with being a famous dancer, Mata Hari was also known for her love of fashion.

The details of Mata Hari’s early life are sadder than they are glamorous.

Born Margaretha Geertruida Zelle on August 7, 1876, in Leeuwarden, Netherlands, Mata Hari was known for her dark hair and eyes — which were unusual among her Dutch peers. She was also known for being sociable and bright. Hari’s father, who owned a hat shop, was relatively wealthy and doted on his daughter.

However, Hari’s luck soon changed. Her father went bankrupt, her parents divorced, and her mother died all by the time she was in her early teens. Her father remarried and sent Hari and her siblings to live with other relatives.

After being expelled from school for having an “affair” with the headmaster, Hari ran away to live with her uncle in The Hague. (Hari was only 16 years old at the time of the alleged “affair,” so historians believe she may have been sexually abused.)

At age 18, she answered a lonely hearts ad written by 39-year-old Dutch soldier Rudolf MacLeod. The two married in 1895, she became Margaretha Geertruida MacLeod, and the couple moved to the island of Java in Indonesia (formerly the Dutch East Indies). The union was not a happy one.

MacLeod drank frequently and kept a mistress — something that didn’t sit well with his new wife. But around this time, Hari also began immersing herself in Indonesian culture, which would prove useful later on.

The couple had two children, both of whom fell very ill in 1899. Their son died that year at the age of two, but their daughter survived.

The young boy’s cause of death is widely believed to have been congenital syphilis — contracted from his parents. However, other sources claim that he died after a disgruntled nanny poisoned both of the kids.

After the tragic death, MacLeod left the army, and the couple returned to the Netherlands, where they parted ways. They officially divorced in 1902.

At first, the couple’s daughter mostly stayed with her mother, but Hari had difficulty finding work as there were few jobs available for women.

Without the means to support her child, Hari made a difficult decision. She handed her daughter over to her ex-husband — and moved to Paris. 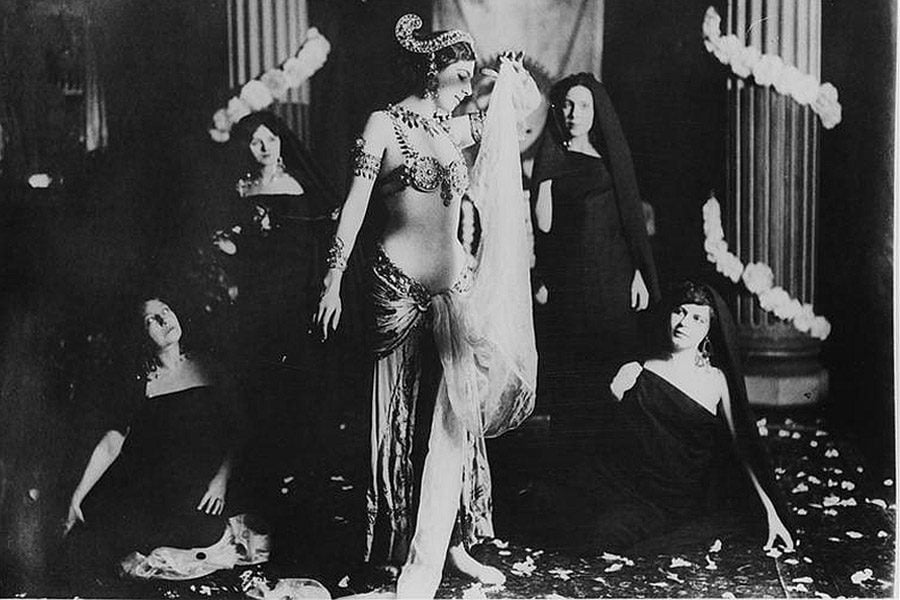 Hari first arrived in Paris in 1903. While she was grateful to have a fresh start, she missed her daughter — and she still struggled to make money.

From giving piano lessons to teaching German, Hari tried to make ends meet however she could. By 1904, she confessed in a personal letter that she had turned to prostitution in order to support herself. She also worked as an artist’s model for painters.

But then, a friend suggested working as a dancer — a career that would change her life. By 1905, she was not only finding success in her new profession but also crafting a couple of new personas for herself.

Claiming variously to be a Hindu artist, the daughter of an Indian temple dancer, or a European who was born in Java, she took the stage name “Mata Hari,” which means “eye of the day” in Malay. She drew crowds for her provocative “sacred dance” — which was basically just a striptease.

After her debut at the Musée Guimet in Paris, the name Mata Hari would be known all over Europe. She was an undeniable sensation. On top of her seductive performance, she also had the rare advantage of “educating” her audience on a different culture and way of life. That way, both she and her audience had a respectable reason for being at the show.

Men around the world would covet her, but Mata Hari mostly had eyes for military officers — a preference that would later get her in serious trouble after Europe plunged into World War I. 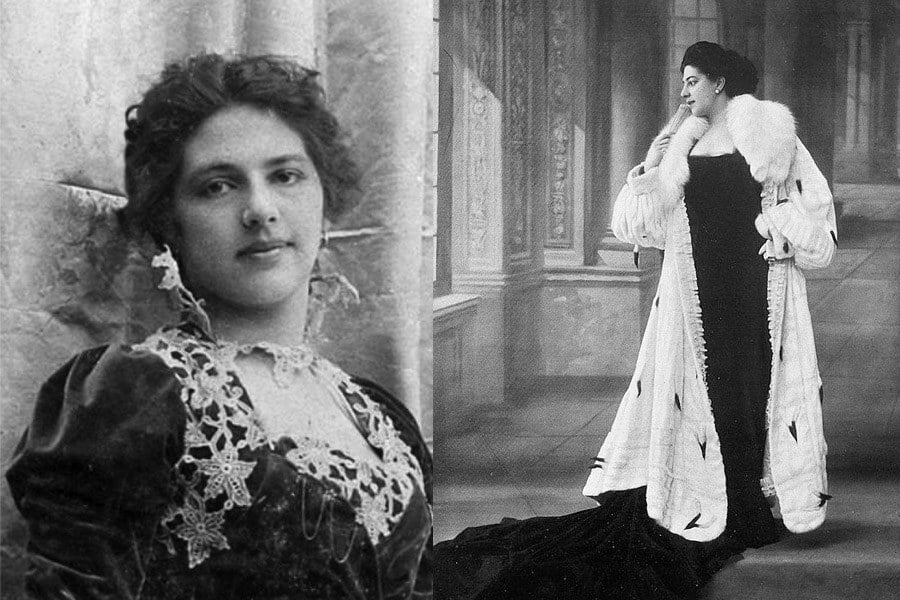 Wikimedia CommonsMata Hari had a weakness for military officers — on both sides of the war.

Given the Netherlands’ neutral stance in World War I, Mata Hari had no trouble crossing national borders. So she did that often — which is why she appeared on a watch list for both French and British intelligence.

What happened next depends on who’s telling the story. It remains unclear whether Mata Hari was actually a lethal spy for the Germans or for the French, or which country she agreed to help first and for what reason.

One version of the story is that around 1914, Hari had personal property (including furs) confiscated in Germany. As the story goes, she went back to the Netherlands shortly thereafter. And in 1915 or 1916, the Germans approached her about going back to France to work as a spy — offering her 50,000 francs to do so. They apparently thought that she would be valuable to them due to her many romantic connections with soldiers.

While she allegedly accepted the money, she later claimed that she did so only to get back what the Germans had taken from her — and wasn’t seriously intending on spying. However, she did make two trips to France in 1915 and 1916 — during which she fell in love with a Russian officer.

And in 1916, she reportedly accepted an offer from the French counter-intelligence chief to spy for his country for a million francs. She would later claim that this was only so that she could retire from her former life and settle down with the man she truly loved. But this decision would ultimately spell her doom — as she was soon caught working as a double agent.

However, another version claims that she accepted a lucrative offer from the French to spy first (again, because of her romantic links to soldiers). In this story, she gets falsely labeled as a German spy — after an unsuccessful attempt to extract information from a German attaché.

That said, it is possible that she simply accepted money from either or both sides just for the sake of supporting herself and her lover. But even if she never took a single spying assignment, this suspicious connection with different intelligence programs would lead to her downfall.

The Arrest And Trial For Espionage 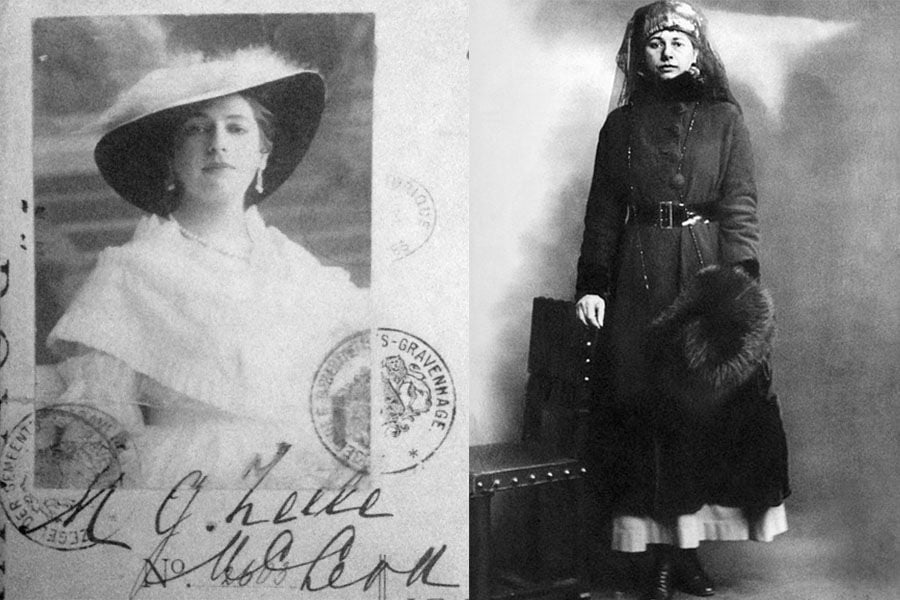 In 1916, when a ship Mata Hari was aboard entered the English port of Falmouth, police arrested her, believing she was a different spy. Though she was ultimately released, things quickly began to go downhill from there.

In January 1917, an officer at the German Embassy in Madrid sent a coded message to Berlin outlining the activities of a German spy named H-21. The French intercepted this message and identified H-21 as Mata Hari.

However, many believe that German intelligence knew this code had already been cracked. In other words, they were setting Hari up for the fall. And at some point in February, she was arrested in a Paris hotel room and promptly thrown in a rat-infested jail cell.

Mata Hari’s trial, which would be held at a military tribunal, was set for July. The charges included spying for the Germans and thus causing the deaths of some 50,000 soldiers.

On the stand, Mata Hari admitted to accepting money from a German to spy on France — but claimed she didn’t do the deeds he asked of her. She said she only offered trivial, meaningless information to demonstrate her ultimate loyalty to her adopted country of France.

She added that she considered the money payment for her formerly confiscated property. But the French didn’t believe that she was innocent. The military tribunal deliberated for only 45 minutes before declaring her guilty — which led to her being sentenced to death.

Mata Hari could only plead her innocence to the Dutch Ambassador in Paris: “My international connections are due of my work as a dancer, nothing else. Because I really did not spy, it is terrible that I cannot defend myself.”

A trailer for the 1931 film Mata Hari, starring Greta Garbo as the titular character.

Regardless of whether Mata Hari was guilty or innocent, her fate was sealed. She would be executed by a firing squad on October 15, 1917.

The details of her death, like her life, are mired in mystery and myth. Some say she blew a kiss to the firing squad before they began shooting. Others say she refused a blindfold and bravely looked her executioners in the eyes.

Perhaps the most believable is this eyewitness testimony: “She displayed unprecedented courage, with a small smile on her lips, just like in the days of her great triumphs on stage.” Nobody arrived to claim her body.

For nearly 100 years after her death, Mata Hari was portrayed as the ultimate “Femme Fatale” who preyed on unsuspecting soldiers. She also became a small fixture in pop culture — especially after she was portrayed by Greta Garbo in the 1931 film Mata Hari.

But outside of the notorious spy legend, the recently released documents on Hari attempt to paint a more complete picture of her life. And it’s a sad picture indeed. Not only was Hari abused and abandoned by many people, she very well may have been used as a scapegoat or pawn during her trial — perhaps because of her controversial profession and reputation.

On top of that, France or Germany (or both) may have also been angry at her for failing to produce useful information. In addition, it’s possible that France wanted someone to blame for issues they were facing during the war.

But unfortunately, the full truth behind the legend probably died with Hari.

To this day, historians still argue over whether Mata Hari was indeed a double agent or even a spy at all. With every recounting of her story more complicated than the last, it seems that she may have been — if anything — a victim of sexual politics. After all, she was not a chaste, self-sacrificing woman — so it’s little wonder why she wasn’t trusted.

After reading about Mata Hari, learn about the most famous American spies. Then, hear the strange tales of famous corpses throughout history.