How Jerome Jacobson and his band of psychics, drug dealers, and strip-club owners perpetrated the daring McMillions scam over the course of 12 wild years.

In 2018, The Daily Beast reported on a bizzare and complex multi-million-dollar scheme that was virtually unheard of known as the McDonald’s Monopoly scam.

The shocking report detailed how a 12-year scheme resulted in the arrest of a former cop who had rigged the fast-food company’s popular game with the help of psychics, strip-club owners, mobsters, drug traffickers, and a family of Mormons. Together they amassed millions.

“I knew I was onto a great story when one of the convicted winners told me: ‘McDonald’s didn’t want anyone to know the mob was involved,'” reporter Jeff Maysh said in an interview.

The surprising story was adapted into an HBO docuseries aptly titled McMillions. But before you tune into the series, read up on the outrageous scam here.

Who Is Jerome Jacobson, The Man Behind The McDonald’s Monopoly Scam? 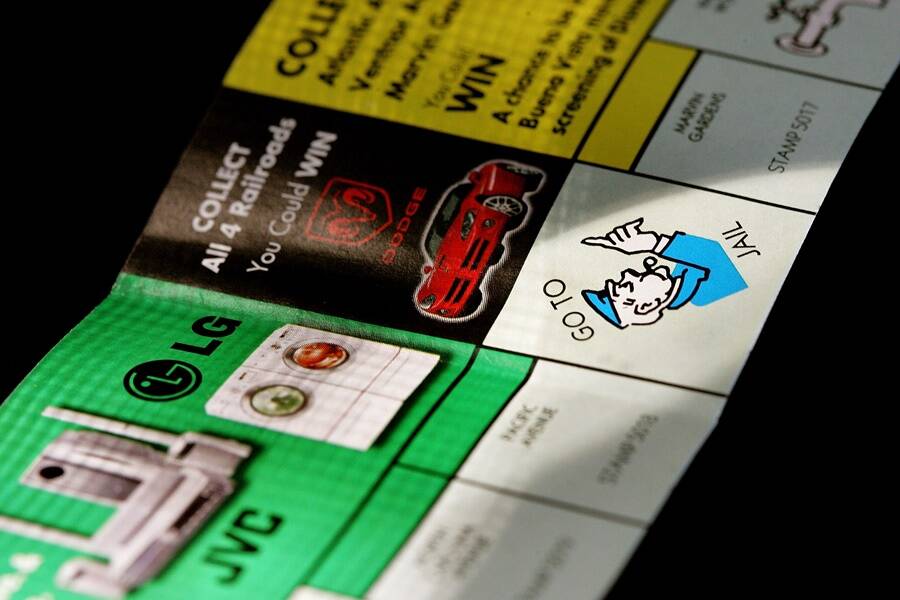 Born Jerome Paul Jacobson in 1943, in Youngstown, Ohio, Jacobson always wanted to be a police officer. He tried to build a career in law enforcement in Florida but his dreams were repeatedly dashed by his poor health.

In 1976, Jerome Jacobson was sworn in to Florida’s Hollywood Police Department but was soon out of the job due to a wrist injury, followed by a neurological disorder that left him unfit to work. Jacobson and his wife Marsha then moved to Atlanta, Georgia, where he secured a job in corporate security through his wife as a security auditor for an accounting firm.

The firm handled the accounts of the Dittler Brothers, a publisher who was in charge of printing the productions of the Simon Marketing company — the very same agency that printed and distributed the game pieces for McDonald’s $500 million sweepstakes contest known as the McDonald’s Monopoly.

Around the same time Jacobson and his wife divorced, the ex-cop became the safekeeper of McDonald’s’ lotto-style game pieces. “It was my responsibility to keep the integrity of the game and get those winners to the public,” Jacobson later told FBI investigators.

According to former colleagues, Jacobson was an eagle-eyed supervisor who had his staff’s shoes searched to prevent game pieces from being stolen. 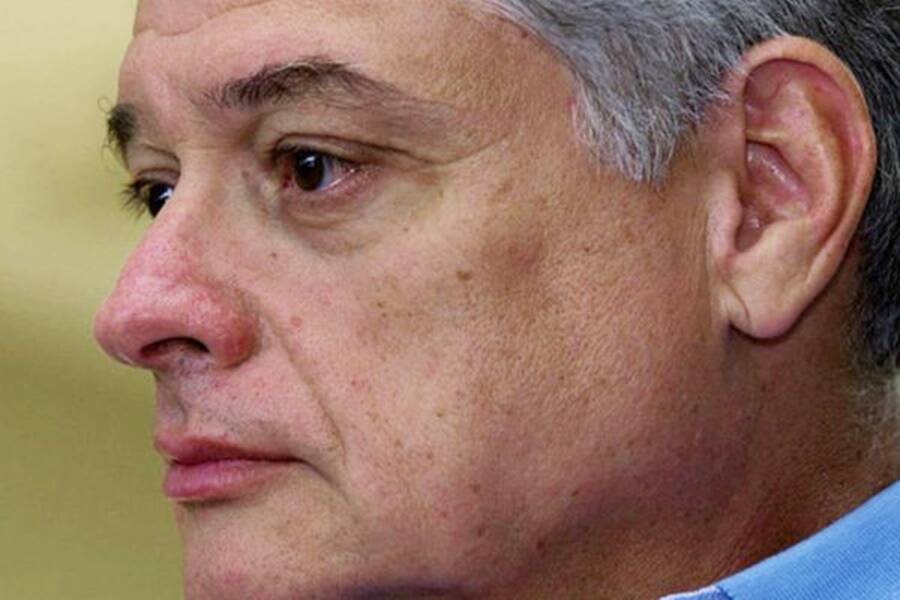 Wild About TrialJerome “Uncle Jerry” Jacobson, the architect of the McMillions grand heist.

“I couldn’t even go to the bathroom without someone going with me,” a driver who transported the game pieces said. Some close to Jacobson suspected that his high regard for authority led him to overuse his own; he often criticized his female employees’ attire and wrote up workers for simple mistakes.

Though he was making a comfortable salary at $70,000 a year, Jacobson became obsessed with “get-rich-quick” schemes and often left work to consult his favorite psychic. Soon, the temptation to hack the McDonald’s Monopoly system became too hard for him to resist.

In 1989, Jacobson stole his first game piece and slipped it to his step-brother, Marvin Braun. The winning piece was worth $25,000.

“I don’t know if I just wanted to show [Braun] I could do something or bragging,” Jacobson admitted.

Next, he gave a winning game piece worth $10,000 to his local butcher in exchange for $2,000 in cash. This was only the beginning.

Inside The McDonald’s Monopoly Scam 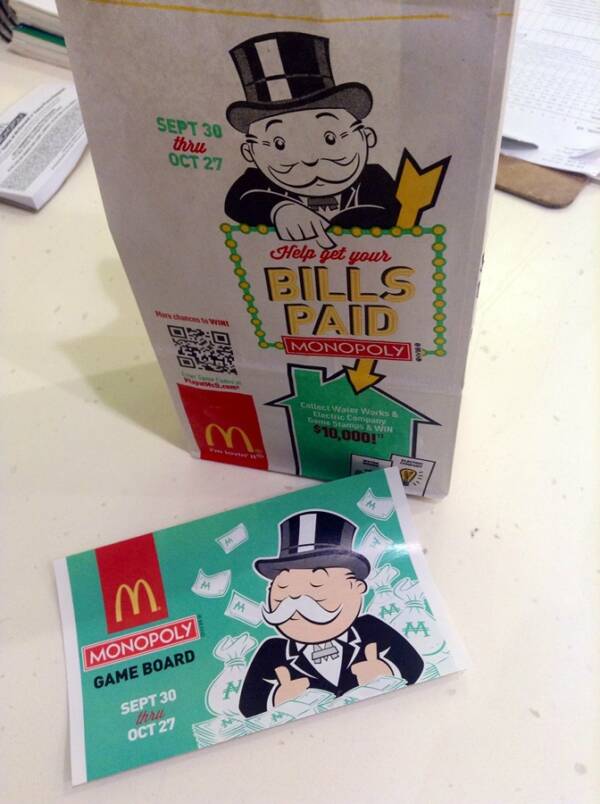 Some of these money prizes were worth hundreds of thousands of dollars but these pieces were also extremely rare. The odds of uncovering a $1 million winning game piece on a packet of hash browns, for example, were one in 250 million.

As a security auditor for Simon Marketing, Jerome Jacobson was in charge of making sure the game pieces safely arrived at McDonald’s packaging factories across the country. He clipped the high-value game pieces and sealed them in envelopes with tamper-proof metallic stickers. He then transported the winning pieces.

This also meant he could easily rig the game.

Jacobson’s scheme was set into high gear in 1995 when he mistakenly received a package from the company’s supplier in Hong Kong. The envelope was full of the anti-tamper seals for the envelopes where the game pieces were kept when in transportation. Having these special seals was the key to his scam’s success.

During business trips, Jacobson secretly switched the winning game pieces inside the envelopes with “common” game pieces then resealed them with the anti-tamper stickers. He did this inside the men’s bathroom at the airport where he could evade the company’s independent auditor who shadowed him on the trips.

He recruited fake “winners” to claim prizes then received a cut from their winnings.

Among Jacobson’s more high-profile recruits was Gennaro Colombo, a casino and nightclub owner who claimed to be connected to New York’s Colombo Mafia family. Colombo, who called Jacobson “Uncle Jerry,” joined the scam as one of his fake winners then began helping Jacobson to recruit others.

Colombo and his wife, Robin, claimed a $1 million winning piece they received from Jacobson in Boston. After that, Robin’s father and her brother-in-law also won McDonald’s $1 million monopoly prize which they claimed separately in different locations to avoid suspicion.

Gloria Brown, Robin’s friend who Colombo recruited, was based out of Jacksonville, Florida. She was instructed to pose as his cousin’s roommate so she could collect the money using his address in South Carolina. They even had Brown record a message on the cousin’s answering machine to keep up appearances and lied to reporters that she found the winning ticket while cleaning out her car.

“I had to just tell, you know, outright lies,” Brown said. Every time Jacobson’s “winners” collected the monopoly prize, he got a portion of it, making him richer with each fake monopoly win.

The Web Of Deceit 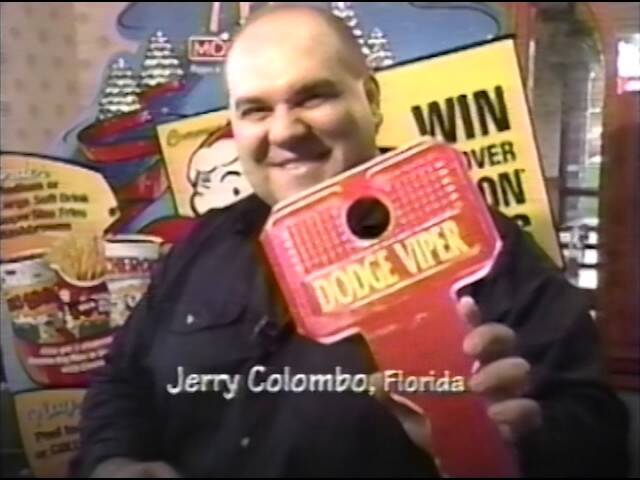 YouTubeGennaro “Jerry” Colombo, who claimed to be a part of Brooklyn’s Colombo crime family, falsely won a Dodge Viper in the Monopoly scam. He later died, ironically enough, in a car crash.

Jerome Jacobson was raking in tens of thousands of dollars per prize. He and his new wife, Linda, moved into a grand red-brick home with a sprawling lawn in Lawrenceville, Georgia. Jacobson bought more real estate, went on expensive cruises, and had countless luxury automobiles in his garage.

“I used to kid him about where the winning tickets were,” recalled Jacobson’s neighbor Bill LaFoy.

Over the course of 12 years, Jerome “Uncle Jerry” Jacobson recruited a number of people — some who were in on the operations while others claimed they had been duped into partaking in the scam — to build a nationwide network of scammers. In all, the operation made away with $24 million. Some of the co-conspirators were strip-club owners, convicts, psychics, drug traffickers, Mormons, and mobsters.

The network only expanded when Andrew Glomb, one of Jacobson’s recruiters who was an ex-convict and had gotten rich smuggling cocaine, gave many of the winning game pieces to his old drug trafficking buddies.

“It was just the excitement, to have the power,” Glomb said. “Because I like you, I can make you a millionaire.”

In March 2000, Special Agent Richard Dent of the FBI’s Jacksonville Field Office received an anonymous tip informing him about a decade-long scam revolving around the McDonald’s Monopoly contest.

The informant told Agent Dent about “Uncle Jerry” and the large cuts he made off selling people the winning game pieces for the contest. The person added that the latest winner of the McDonald’s Monopoly grand prize, Michael Hoover, was a fake winner involved in the fraud.

Agent Dent called McDonald’s Spokesperson and “fixer,” Amy Murray, to relay the shocking news. The company had no idea there had been a network of scammers working together to cheat the game for the last decade. 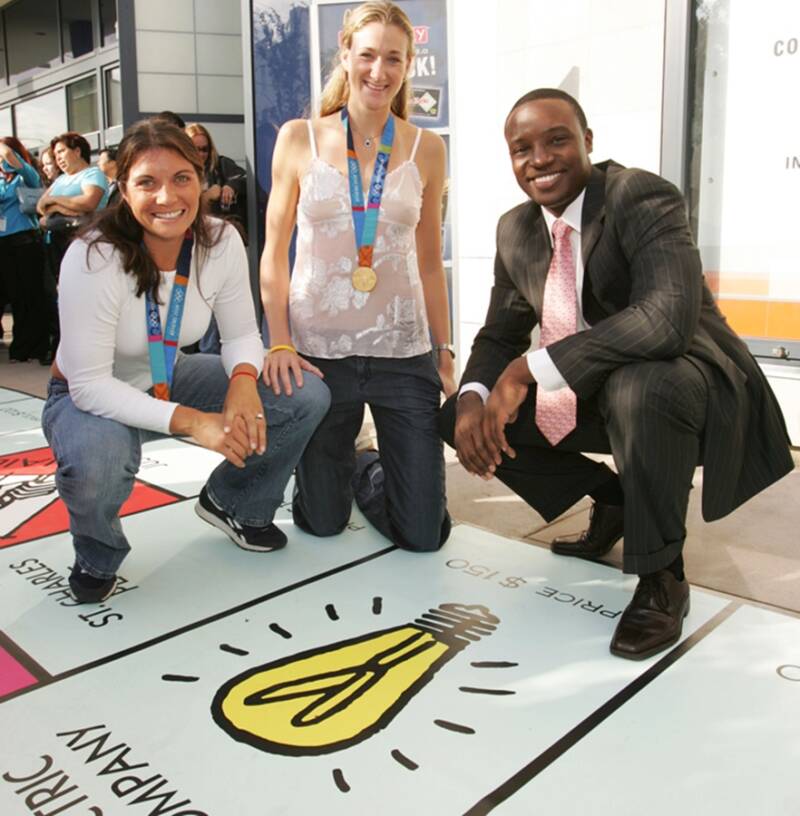 Mathew Imaging/FilmMagicYears after the McDonald’s Monopoly scam bust in 2001, the game remains the company’s most popular marketing campaign.

On Aug. 3, 2001, a McDonald’s film crew arrived at the home of $1 million winner Michael Hoover. Little did Hoover know that the crew was actually a couple of FBI agents, closely listening to his false tale of how he’d recovered the winning game piece.

At the end of the month, the FBI conducted an early morning raid at Jerome Jacobson’s residence. The agency made eight arrests, including Andrew Glomb and another conspirator named Dwight Baker, his wife Linda, and their associates who worked as Jacobson’s recruiters and phony winners.

In the end, Jacobson was charged with conspiracy to commit mail fraud. He received 15 years in prison and agreed to pay $12.5 million in restitution.

Meanwhile, his co-conspirators were all released on probation and are working to pay back the money through monthly installments to this day.

“All I can tell you is I made the biggest mistake of my life,” Jacobson told the judge at his sentencing.

The story would perhaps have remained a staple of cultural consciousness, had its trial not begun just a day before the September 11th attacks.

The Daily Beast bombshell report garnered all its information on Jacobson’s side of the story from court documents. The now-76-year-old is in poor health and does not respond to media.

As for who tipped off the FBI about the secret scam still remains a mystery. Robin, Colombo’s widow, believes Colombo’s mobster family ratted them out to authorities as retribution for his sudden death which they believed was orchestrated by Robin herself.

After the article published, actor-turned-producer Mark Wahlberg and his team created a true crime HBO docuseries based on the incredible story titled McMillions.

The limited series takes a look at the forgotten case through the perspective of the “winners” involved, the FBI agents who caught Jerry Jacobson, and archival footage from the agency’s sting operation.

The six-part docuseries is set to premiere on Feb. 3, 2020. Meanwhile, the case is also being made into a major motion picture after Hollywood duo Ben Affleck and Matt Damon won the rights to the film in a lucrative multi-million deal.

Matt Damon is set to play the part of ex-cop-turned-criminal Jerome Jacobson though the rest of the cast has yet to be announced.

Next, read the story of other crazy real-life heists, such as the unsolved case of the Isabella Stewart Gardner Museum heist and the astounding true story of the Lufthansa heist hinted at in the film ‘Goodfellas.’