These species split off from the shark family tree nine million years ago, making them the most recent evolutionary adaptation to occur among sharks. 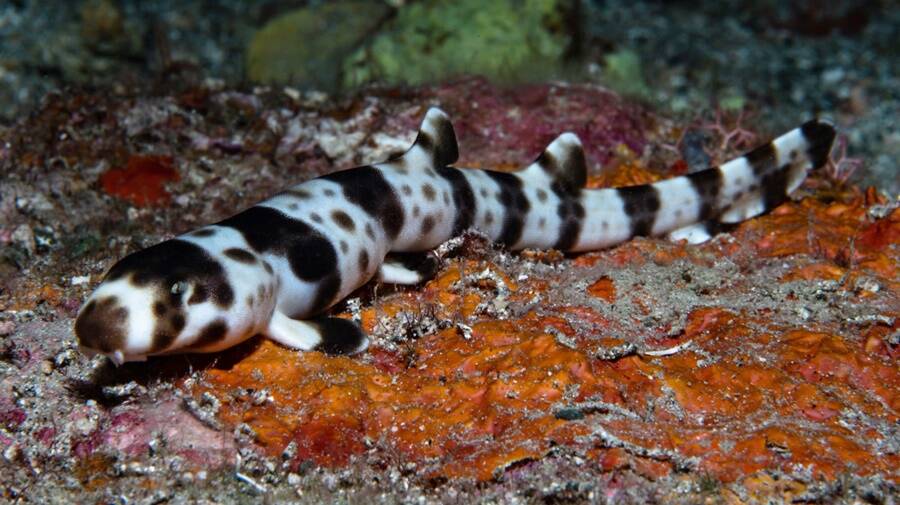 In the depths of the tropical ocean, scientists have discovered something incredible. They found four new species of shark which belong to the genus Hemiscyllium, also known as the family of ‘walking sharks.’

The discovery was a concerted effort by international researchers who sought to identify the four species as part of the Hemiscyllium genus and determine their place in the shark’s evolution timeline stretching back to 400 million years ago.

The new study, published in the journal Marine and Freshwater Research, describes nine species of walking shark which inhabit the waters between the eastern territory of the Indonesian archipelago and northern Australia, where all of these species are typically found.

But fear not; these walking sharks are much less frightening than one might expect them to be. The animals are medium-sized creatures that scour the sea bed in search of their preferred prey: crustaceans and molluscs.

Remarkably, the animals still swim as their non-walking brethren do but will use their side fins as limbs to “walk” in more shallow waters. While their ability to navigate areas that may put them in contact with humans might alarm some, these sea creatures are relatively harmless to humans.

“At less than a meter [3.3 feet] long on average, walking sharks present no threat to people,” Christine Dudgeon, a researcher at Australia’s University of Queensland and the new study’s co-author, explained.

“But their ability to withstand low oxygen environments and walk on their fins gives them a remarkable edge over their prey of small crustaceans and molluscs.”

Indeed, the walking shark’s amphibian-like abilities — which among some species includes being able to breathe out of water — prove handy in dire situations, allowing it to return itself back to the ocean if it ever catches itself stranded during low tide, for example.

The walking shark’s incredible ability to adjust to life both in and out of water is distinct and has not been found among any of its closest relatives, like the bamboo sharks or the carpet shark order.

“We estimated the connection between the species based on comparisons between their mitochondrial DNA which is passed down through the maternal lineage. This DNA codes for the mitochondria which are the parts of cells that transform oxygen and nutrients from food into energy for cells,” Dudgeon said.

Sharks species capable of “walking” on ground is certainly remarkable but it isn’t the real news from the study. Rather, the walking shark species’ placement in the long evolution track of the shark family tree — which was confirmed by the findings in the new study — is the bigger surprise.

“We found the sharks, which use their fins to ‘walk’ around shallow reefs, only split off evolutionarily from their nearest common ancestor about nine million years ago, and have been actively [spreading] into a complex of at least nine walking sharks ever since,” said co-author Mark Erdmann from the Conservation International, one of the agencies involved in the 12-year project.

“That may seem like a long time ago, but sharks have ruled the oceans for more than 400 million years. This discovery proves that modern sharks have remarkable evolutionary staying power and the ability to adapt to environmental changes.”

The Epaulette shark is known to be able to both walk and breathe on land.

In the case of the walking sharks which roam parts of the waters between Indonesia and Australia, the evolution to walking likely occurred after some species began moving further away from their original population. As such, they became genetically isolated and, over time, developed into new species.

“They may have moved by swimming or walking on their fins, but it’s also possible they ‘hitched’ a ride on reefs moving westward across the top of New Guinea, about two million years ago,” Dudgeon said.

In addition to Conservation International, other bodies involved in the international study include the Indonesian Institute of Sciences, the Indonesian Ministry of Marine Affairs and Fisheries, Australia’s Commonwealth Scientific and Industrial Research Organisation (CSIRO), and the Florida Museum of Natural History.

The discovery of the four new walking shark species has increased the total of known populations of this genus to nine and is a huge breakthrough in furthering our understanding of the shark population.

Although sharks have unfairly earned a reputation as ruthless man-eaters, their dwindling numbers due to overfishing and disappearing habitats have turned these sea predators into a threatened animal species. As such, at least three of the nine walking shark species have been added to the International Union for Conservation of Nature Red List for animals at risk.

“A global recognition of the need to protect walking sharks will help ensure they thrive providing benefits for marine ecosystems and to local communities through the sharks’ value as tourism assets,” said Erdmann. “It’s essential that local communities, governments, and the international public continue working to establish marine protected areas to help ensure our ocean’s biodiversity continues to flourish.”

Next, check out the rediscovery of the Coelacanth, the 400 million-year-old prehistoric fish scientists thought went extinct and learn about the 95-million-year-old skull of an ancient snake that had legs.