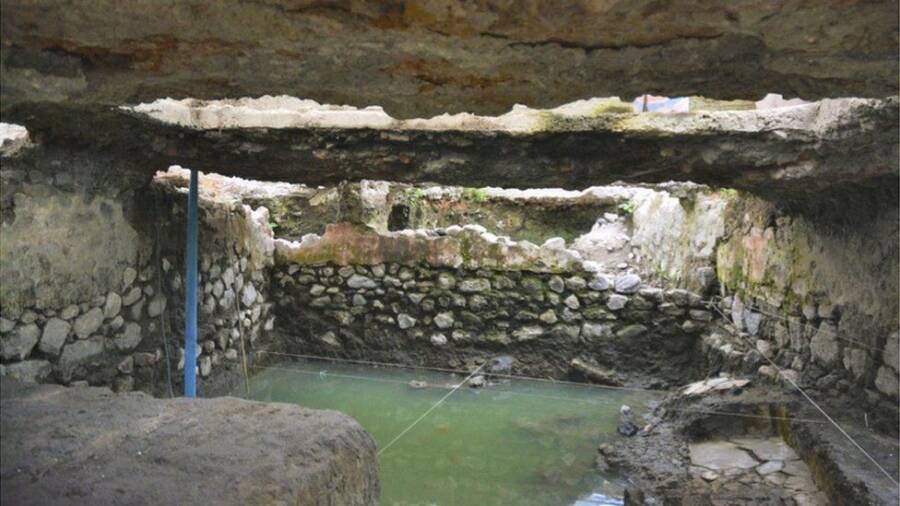 Mexico’s National Institute of Anthropology and History (NIAH)The foundation of this ancient sweat lodge is 16.4 feet long and 9.7 feet wide. Goddesses were once worshipped within its walls.

A pre-Hispanic Mesoamerican sauna dating to the 14th century has been uncovered by archaeologists in Mexico City’s historic La Merced neighborhood. The BBC reports that several primary components of the ancient sweat lodge are still remarkably intact.

These indigenous saunas, known as temazcals, were built by the Mesoamericans of the time for medicinal, spiritual, and fertility purposes and rituals. Mexico’s National Institute of Anthropology and History (NIAH) said the find clarified a slew of historical questions.

Unearthing the pre-Hispanic site helped experts locate Temazcaltitlán — one of the very first settled areas of the ancient city of Tenochtitlán. The site was primarily used for purification ceremonies for the ill, for warriors after a battle, and for ensuring successful childbirth. 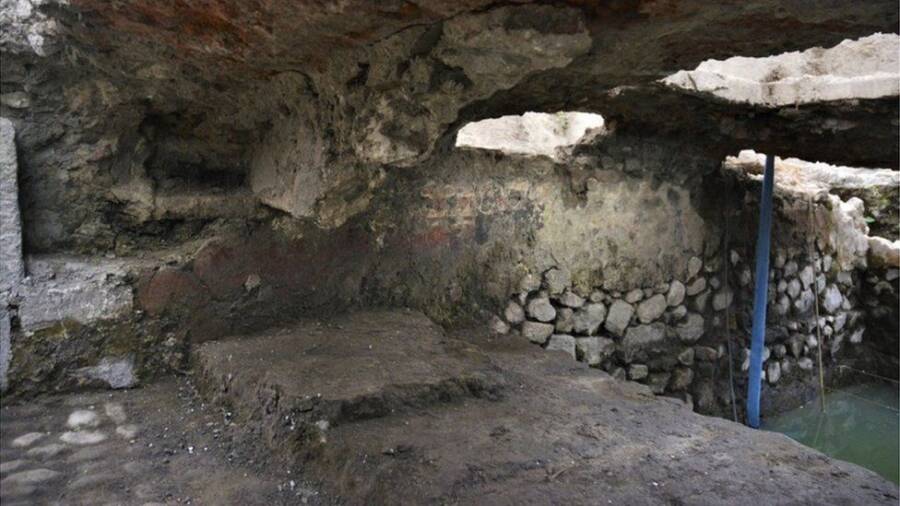 Mexico’s National Institute of Anthropology and History (NIAH)Alongside practical purification purposes, these saunas served as a place to recover after battle, prepare for childbirth, and worship goddesses of lust, vice, land, water, and more.

A foundation house and a colonial tannery were found at the site, as well. Researchers believe Mexica nobles — the Mexica were the indigenous people of the Valley of Mexico who comprised the Aztec Empire between 1428 and 1521 — lived in the former between 1521 and 1620, while the tannery is currently dated to between 1720 and 1820.

For excavation lead Víctor Esperón Calleja, these discoveries have shed enormous light on the region’s history and culture.

“Tenochtitlán was divided into four parts and we are in the part called Teopan in a neighborhood called Temazcaltitlán where the sweat lodges were,” he said. “The [house and tannery] findings suggest that in the 16th century this area was more populated than we initially thought.” 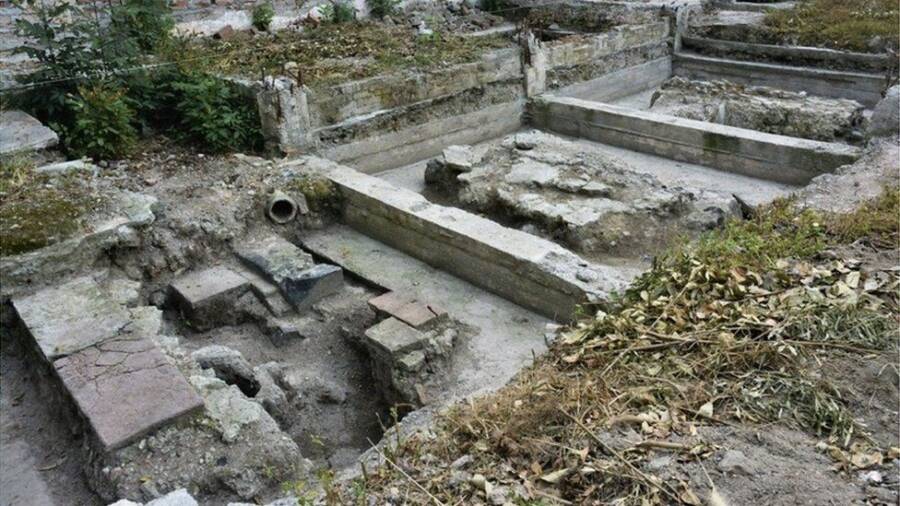 Mexico’s National Institute of Anthropology and History (NIAH)The foundations of a house and a tannery were discovered at the site, as well. Experts believe a noble family lived in the home after Hernán Cortés conquered the city of Tenochtitlán from Moctezuma II in 1521.

The house, built after the Spanish conquistador Hernán Cortés took the Aztec city of Tenochtitlán and defeated Moctezuma II in 1521, was decorated with red motifs on the interior walls. Researchers believe its owners were a noble and respected family. Tenochtitlán was, after all, a major metropolis home to a wide strata of social and economic classes in Aztec society.

“The site is part of a protected area and that is why Archaeological Rescue Office of the INAH has intervened,” said Calleja in reference to the INAH taking the lead on this discovery. 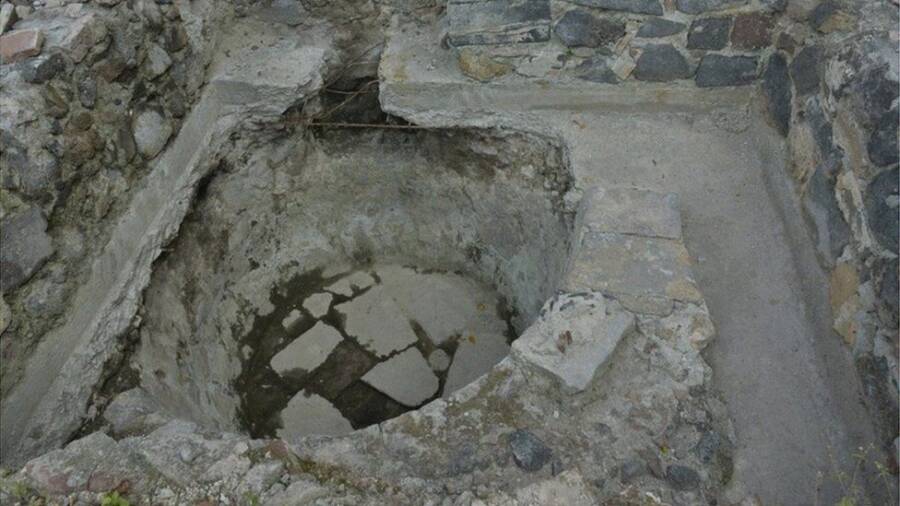 Mexico’s National Institute of Anthropology and History (NIAH)Many of the sauna’s main components, such as the pits themselves, have remained intact for centuries.

In terms of the temazcal’s size, INAH confirmed the foundation is 16.4 feet long and 9.7 feet wide. A bathtub and a bench were built into its walls, the discovery of which lends credence to another known historical record.

An Aztec record says that a Mexica noblewoman named Quetzalmoyahuatzin regularly bathed in a temazcal before giving birth. Now that a sweat lodge like the one described in this record has actually been discovered, that written document is largely verified as fact.

Researchers believe the whole neighborhood was one centered on worship, and not just of Tlazolteotl — the Aztec deity dedicated to purification, steam baths, lust, and vice. 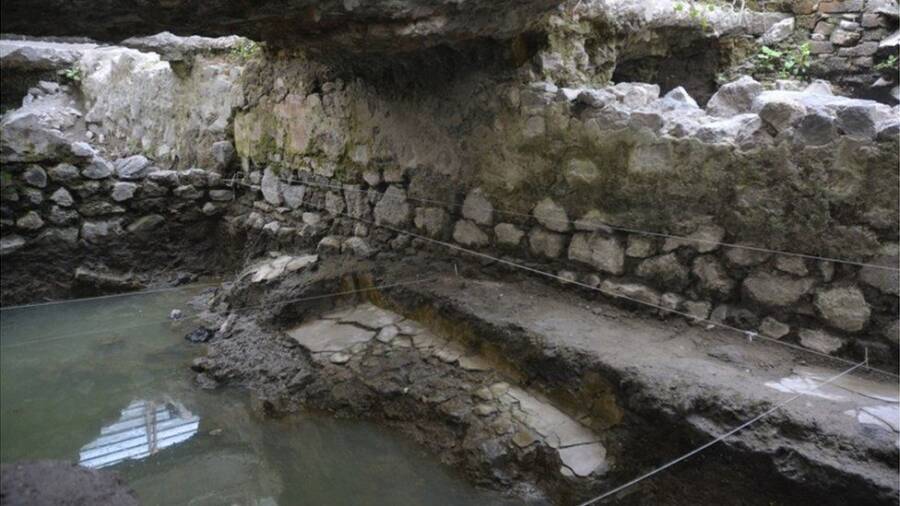 Mexico’s National Institute of Anthropology and History (NIAH)Lead excavator on the project Víctor Esperón Calleja explained that the Archaeological Rescue Office of the INAH took over because the site is located in a historically protected area.

Other deities such as Ixcuina, the goddess of labor, Ayopechtli, the goddess of birth itself, and goddesses who represented land or water — such as Coatlicue, Toci, Chalchiuhtlicue, and Mayahuel — were honored there, too.

As it stands, there may be further revelations stemming from this discovery that’ll contextualize this history even more.

After learning about the pre-Hispanic Mesoamerican sweat lodge unearthed in Mexico City’s La Merced neighborhood, read about this ancient matrilineal society discovered in New Mexico. Next, learn about the Aztec temple with 32 children’s severed necks found in Mexico.