The road was built some 2,000 years before McDonald's workers uncovered it during construction. 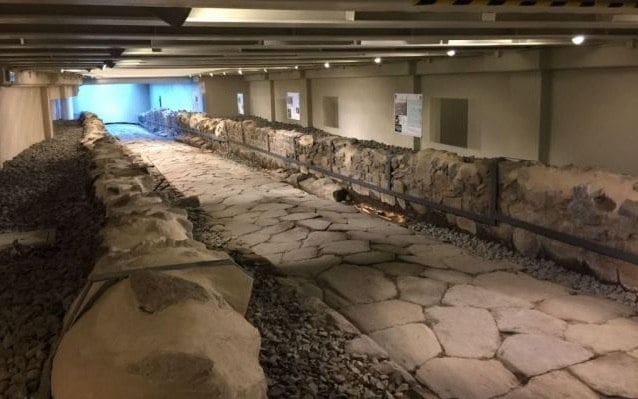 A unique McDonald’s restaurant opened up in Italy this past Tuesday with an ancient Roman road built underneath it.

Calling it the first “restaurant-museum” in the world, McDonald’s Italia coughed up more than $300,000 to restore the road before completing the restaurant. Hidden underground for centuries, the road was discovered in 2014 when workers first started building the new restaurant in Frattoachie, not far south of Rome.

The road itself is about 150 feet long and was constructed in either the first or second century BC. However, it fell into disrepair only three centuries later.

Today, there are ruts visible in the paving stones that make up the road, presumably from wagon wheels. Researchers have also made skeleton casts out of three adult males who were buried underneath the road.

The local mayor, Carlo Colizza, told The Local that this restoration experiment is a “positive example” of when the private and the public mix.

“We were able to perfectly combine business activities,” Colizza added, “with respect for and appreciation of the history and archeology.”

The road is accessible to anyone who wants to see it, meaning that no McDonald’s purchase is necessary to appreciate this piece of Roman history.

McDonald’s Italia CEO Roberto Masi told The Local that mixing past and present with this McDonalds restaurant-museum was a “virtuous” endeavor, adding that, “It is a place where you can look at the future, through the past.”

Next, check out this animated explanation of the structure of the Roman army, before flicking through these photographs of the most stunning Roman ruins outside of Italy.