The men had been missing for three days after running out of fuel and drifting 118 miles from home. 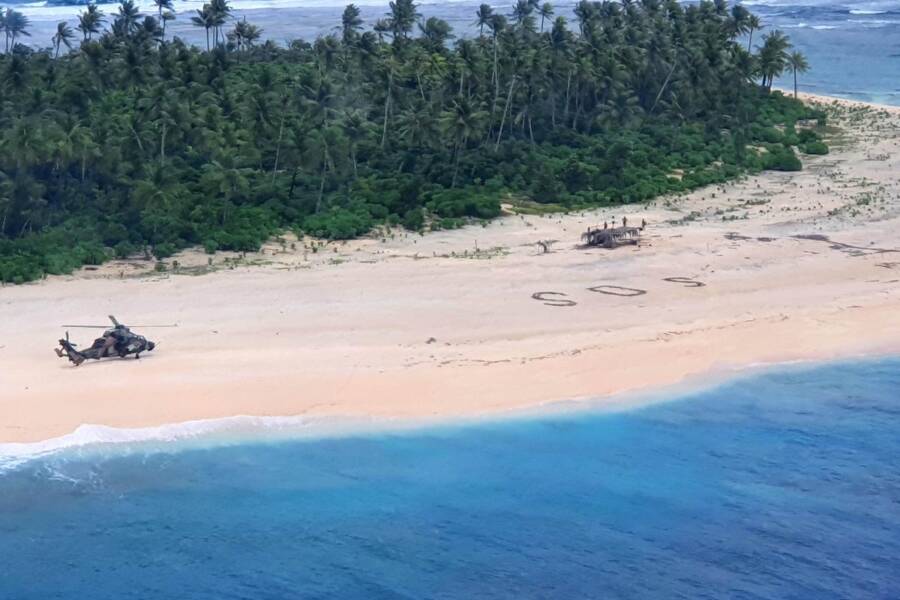 Australian Defence ForceThe mariners were missing for three days before this Australian Army helicopter retrieved them from Pikelot Island.

It was July 29, 2020, when three ambitious mariners set sail from Pulawat in the Federated States of Micronesia for the Pulatop atolls. While sailing these 23 nautical miles across the western Pacific seemed entirely doable at first, the crew eventually sailed off course — and then ran out of fuel.

According to NPR, the three men were subsequently left stranded on the remote island of Pikelot. At this point, their only hope for survival hinged on somebody back home noticing their absence and notifying the relevant authorities.

But if they hadn’t etched a visible “SOS” in the Pikelot sands, it’s doubtful that neither the Australian nor U.S. military stationed nearby would have found them.

“We were toward the end of our search pattern… and that’s when we saw ‘S.O.S’ and a boat right next to it on the beach,” said Lt. Col. Jason Palmeira-Yen, an Air Force pilot.

Footage of supplies being dropped on the island and subsequent rescue efforts.

According to the Australian Department of Defense, the men were finally reported missing on July 31. On the afternoon of Aug. 1, the Australian Defense Force and Guam’s Rescue and Coordination Center worked together to find them and on the following day they succeeded.

The mariners were found 118 miles west of their point of departure, with their blue and white 23-foot sailboat parked beside them on the beach.

Palmeira-Yen recalled nearly passing by Pikelot. “We turned to avoid some rain showers and that’s when we looked down and saw an island, so we decide to check it out.” If he had not been so meticulous, the mariners may still be stranded.

Aware that they had two nearby helicopters available, Palmeira-Yen radioed the crew of Royal Australian Navy Ship HMAS Canberra for assistance. “The ship’s company responded to the call and had the ship quickly prepared to support the search and rescue,” Commanding Officer Captain Terry Morrison of the Canberra said.

The Canberra was just returning to Australia, while the rest of its naval group was participating in an exercise off the coast of Hawaii. 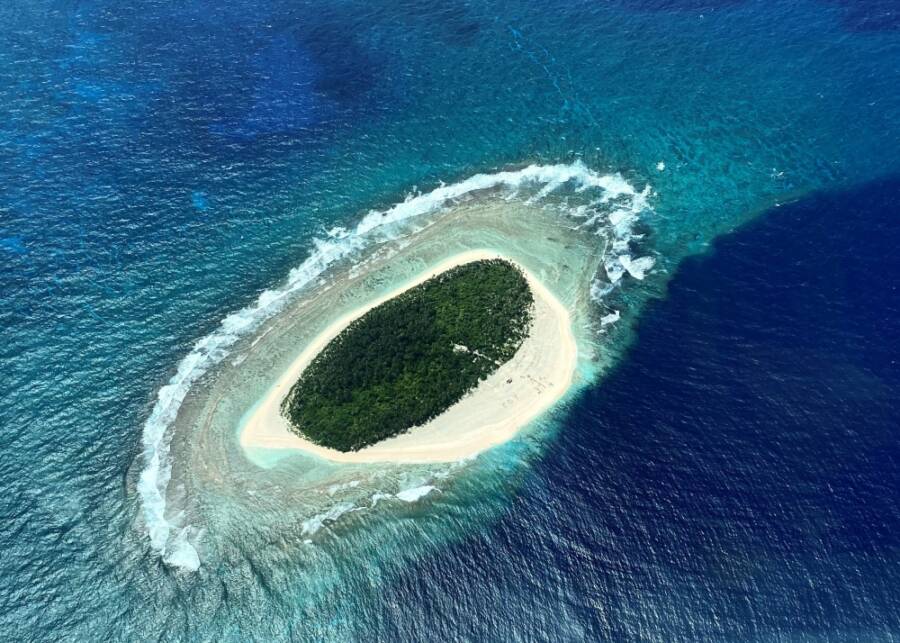 U.S. Air ForceThe mariners were ultimately picked up by the FSS Independence, a Federated States of Micronesia inspection vessel.

The authorities even took social distancing precautions into account — as COVID-19 is indifferent to emergencies — and decided to limit exposure to one another and the mariners. Once a helicopter crew from the Canberra located the sailors, they aerially deployed food and water to the men.

“I am proud of the response and professionalism of all on board as we fulfill our obligation to contribute to the safety of life at sea wherever we are in the world,” said Canberra‘s Commanding Officer Captain Terry Morrison.

The U.S. Coast Guard, meanwhile, dropped down a radio and notified them that help was on the way. Finally, on Aug. 3, the Micronesian patrol vessel FSS Independence arrived at Pikelot and picked up the undoubtedly grateful crew. The men were reportedly in good condition. 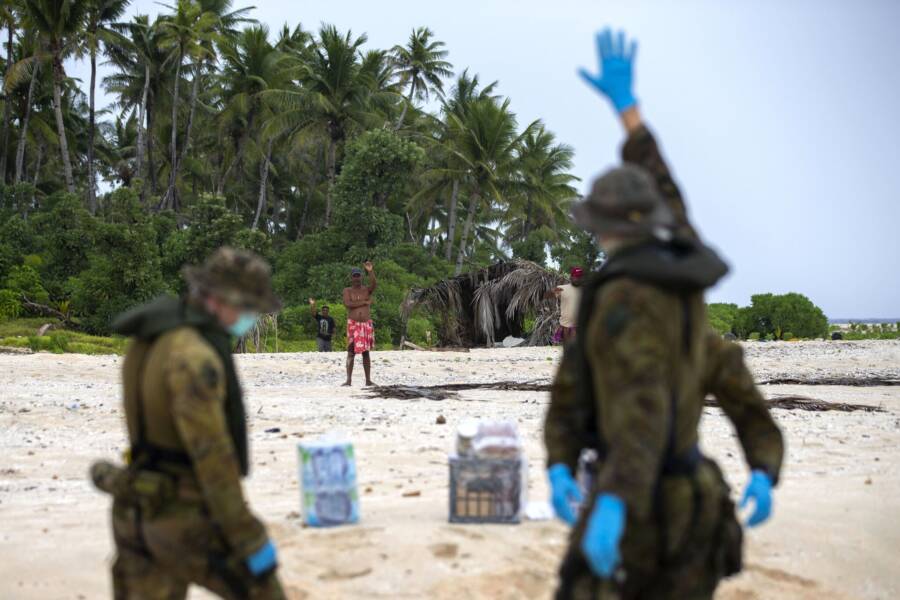 Australian Defence Force“SOS” is internationally recognized as a distress signal.

This is not the first time that notes in the sand came to the rescue of mariners stranded in the deep ocean. In 2016, three men who capsized in the Micronesian waters swam two miles to a small nearby island, on which they scrawled “HELP” and were rescued by the U.S. Coast Guard. This is also not the first time resourcefulness kept someone stranded at sea alive. In 2018, a teenage boy managed to survive 49 days on the high seas in a fishing hut.

As for these sailors, they were subsequently taken back home to Pulap, Chuuk, after an intense few days that could’ve ended terribly — were it not for level-headed teamwork. At least for Captain Christopher Chase, Commander of Coast Guard Sector Guam, that’s what made all the difference.

“Through coordination with multiple response organizations, we were able to save three members of our community and bring them back home to their families,” he said.

Next up, read about the incredible story of a man who survived 438 days on the high seas in the Pacific Ocean. Then, check out the six most remote places in human civilization.