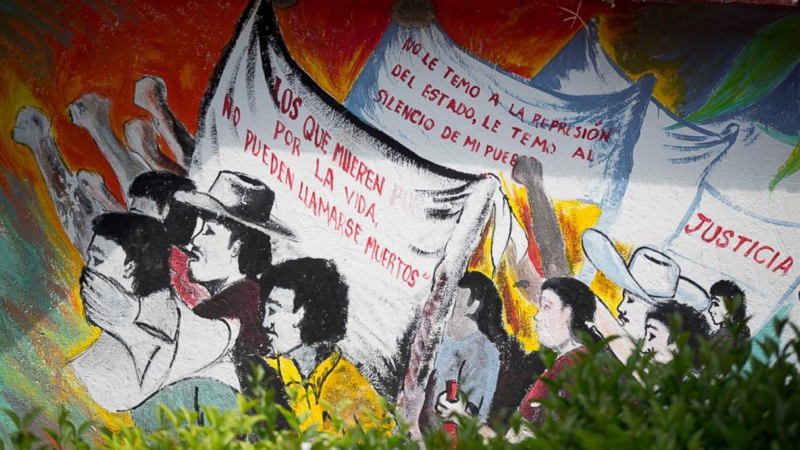 The Spanish messages on this mural read from the left “Those who die for life, cannot be called dead,” “I do not fear state repression, I fear the silence of the people,” and “Justice.” Source: ABC News

With its white sand beaches, bronzed dancers and succulent agave, the Mexico of travel advertisements is hardly the Mexico that a number of its citizens experience daily amid the country’s new dirty war. Across Mexico, thousands of people have gone missing with families left seeking answers and bodies.

In 2006, violence exploded across Mexico—particularly along the Texas border—when former president Felipe Calderón enacted his militarized drug war. Calderón’s war lasted six years and left at least 60,000 people dead across the nation. It still rages on under new leadership. 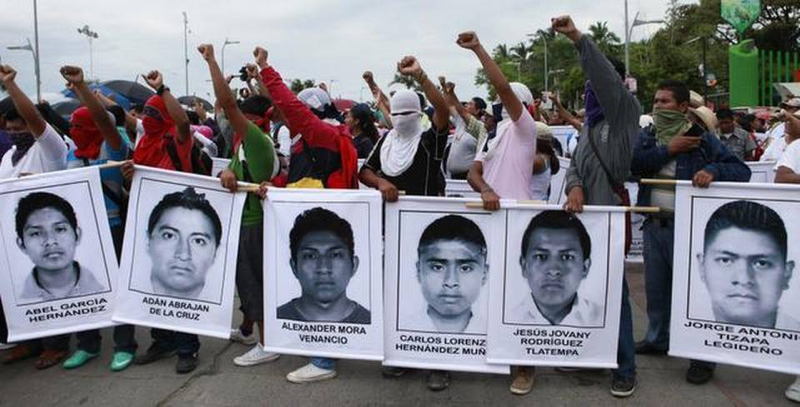 Protestors took to the streets of Acapulco to demand answers in the most recent disappearances. Source: El País

In 2012 Calderón was replaced by current president Enrique Peña Nieto, who now has a powder keg to contain. That same year, the Federal Prosecutor’s Office and the Interior Ministry released a report that compiled the names of more than 25,000 people who had vanished during Calderón’s term. The report was later leaked to the Washington Post. Just a few days following the leak, the civil society group Propuesta Cívica published a database from the Federal Prosecutor’s Office stating that there had only been 20,000 disappearances. 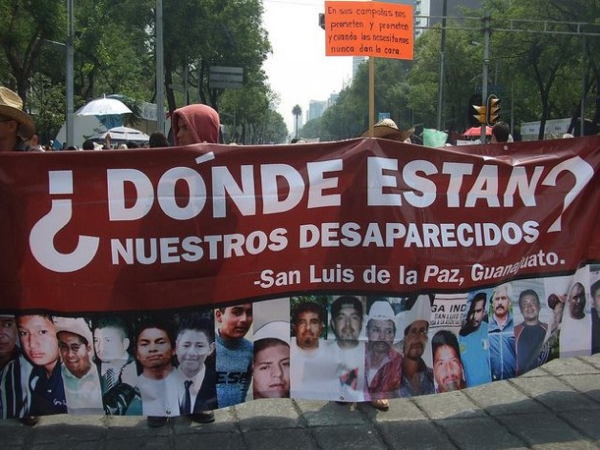 The March of Mothers took place in May 2012 in the center of Mexico City. The protestors carry banners asking “Where are they?”
Source: IPS Noticias

The Mexican government frequently claims that the disappearances are only committed by rival drug cartels, while others including Human Rights Watch state that the victims are stolen through a process of enforced disappearance. Akin to the disappeared or “Los desaparecidos” of Argentina who were kidnapped and murdered by the government between 1969 and 1983 during their Dirty War, Mexican authorities rarely pursue the cases and proffer affected families minimal assistance, citing the grim fact that physical mutilation and decomposition makes the process of identifying bodies incredibly cumbersome.

Many of the disappearances occur along the Texas border, but recently violence has erupted in the southern Mexican states of Guerrero, Michoacán and Oaxaca, with the most notable case being the September 26th abduction of 43 Mexican students from Iguala by municipal police.

Mexican federal police have since been deployed to twelve towns in Guerrero and are investigating the municipal forces who, according to the BBC, admitted that they gave the students to a gang called Guerreros Unidos or United Warriors. The students studied under a left-wing instructor and it is not known if they were taken because of their affiliations. Since the abductions, the mayor and his family have absconded to avoid being charged or interviewed. In a huge step towards justice, however, the mayor was impeached by Guerrero Congress. 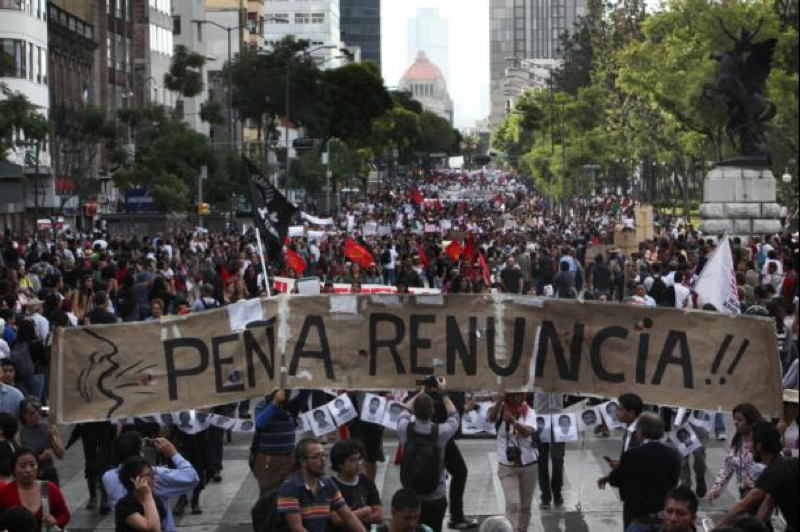 Protestors carry a banner that reads “Pena Quit,” in response to the abduction of 43 college students.
Source: WBT

The seemingly apathetic police are often poorly paid and unqualified, making them an easy target for armed and dangerous criminal gangs who engage in bribery, extortion and retaliation. The search continues in Iguala and has since unearthed multiple mass graves surrounding the city, cementing the obvious reality of an abductee’s fate. While Nieto claims that homicides are on the decline in his country, volunteers and citizens continue to dredge up the dark past, which only belies Nieto’s optimistic assertions. 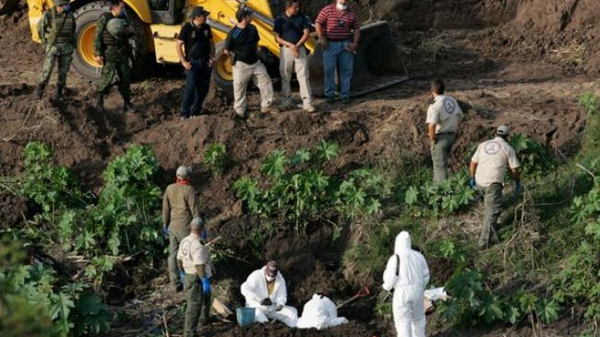 In February 2014, Mexican police discovered a mass grave along the banks of the Lerma River containing 17 corpses.
Source: PressTV

Many have alleged that the Mexican government has historically operated in partnership with a cabal of drug cartels and political leaders. It is common knowledge that police and military do very little to investigate any of the disappearances, with Nieto even refusing to officially acknowledge—and act on—the list of 25,000 missing individuals until months of citizen pressure forced him to provide a “solution”. Following other public outcries, the government has also been pushed to admit that police have taken part in enforced disappearances and have hired gang members to serve as police. 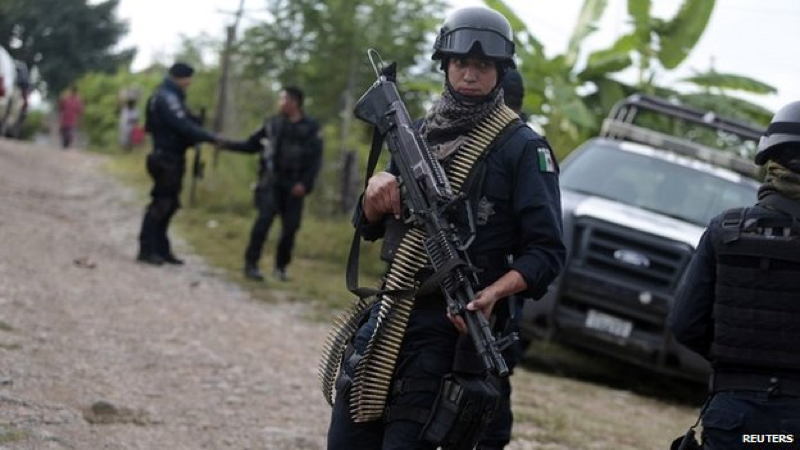 Meanwhile, the government tries to belittle the magnitude of the abductions by claiming that they are a tragic result of cartel turf wars or bad life choices. But when the disappeared often include political activists and community leaders, such a consistent string of “coincidences” is hard to swallow. That conclusion becomes even more difficult to accept when, for example, eyewitnesses have pointed to the Mexican Navy when explaining the multiple disappearances in Nuevo Laredo since 2011. 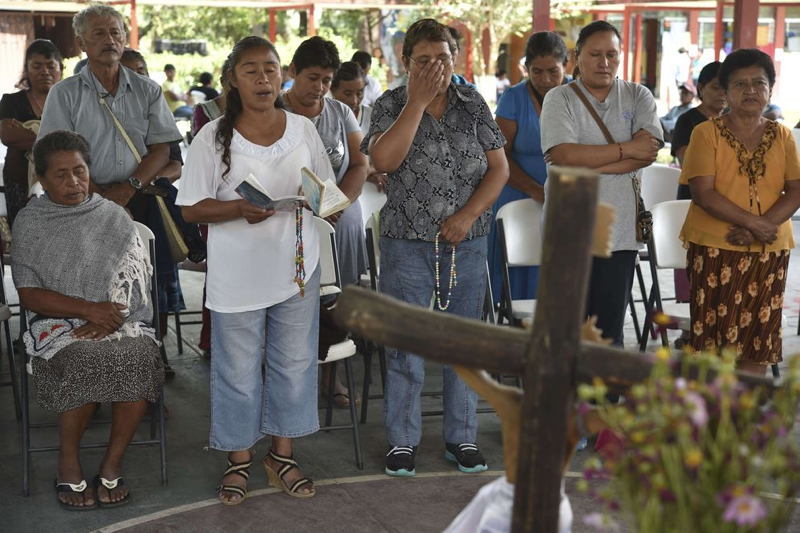 Numerous outreach and investigative groups have been established to address the problem of Los Desaparecidos. The people need the support, research and voice of organizations like Human Rights Watch, Amnesty International and Guerrero-based rights group Tlachinollan which help gather and disseminate a more truthful message to the public.

Recently, Nieto’s government passed a victim’s law that provides more resources for the search of the disappeared, including a search unit. This is a positive step toward justice, however it will still be difficult for many to trust the government when it has admitted to being at least partially responsible for large-scale enforced disappearances. 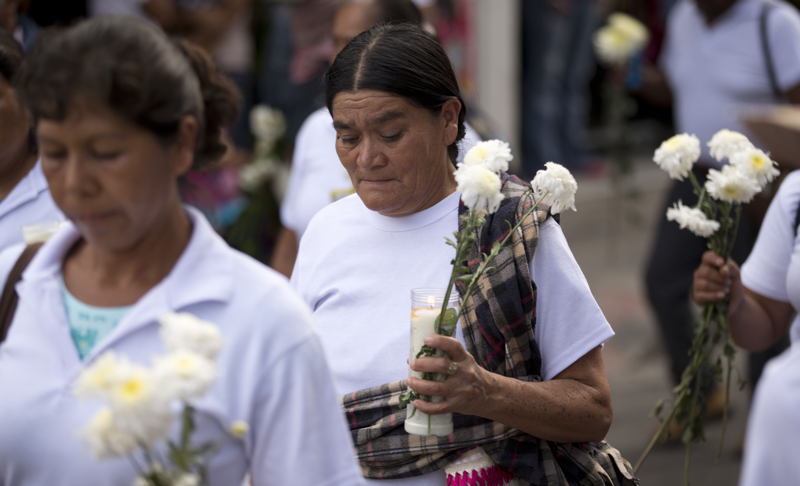 Relatives of the 43 students march with flowers and candles.
Source: The Rakyat Post

Mexico’s war on drugs and its “slow and limited” response as described by Amnesty International has led many to question how the United States’ involvement in the country has affected the fight. The US has provided billions of dollars to the Mexican military under the Merida Initiative, a partnership intended “to fight organized crime and associated violence while furthering respect for human rights and the rule of law”, but with little oversight over how that aid is used. Unsurprisingly, the initiative’s positive effects aren’t readily apparent, as kidnappings in the country increased by 25% in 2013 according to the Congressional Research Service. 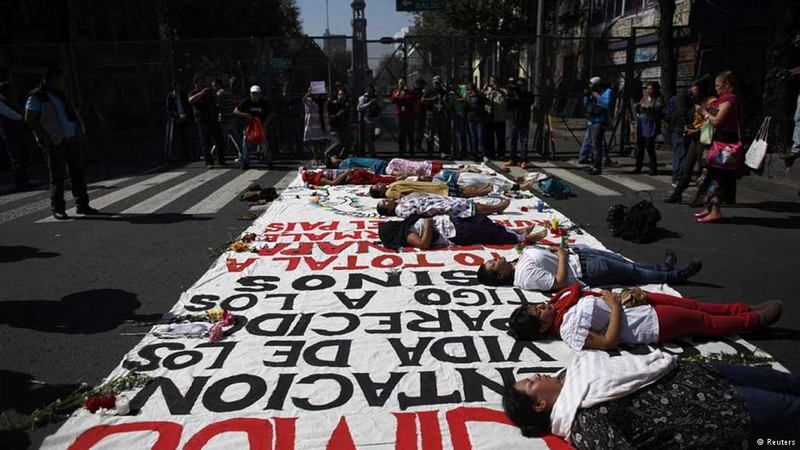 Students organized a protest against the government for the kidnapping of the 43 missing students Source: DW

The rate of disappearances in Mexico is staggering. Even with increased funds, intervention and assistance, many federal agencies do little to search for the lost. Drug cartels and the military have turned the streets into killing fields, while the people are the ones who continue to suffer. Families dig up bodies and uncover the bloody legacies hidden from white-sanded TV snippets of the so-called Mexican paradise. Meanwhile, the war continues.