Blind since birth, Michael Hingson relied on his guide dog Roselle to lead him down 78 floors of the North Tower during the 9/11 terrorist attacks — and she did.

On September 11, 2001, Michael Hingson was in his 78th-floor office in the North Tower of the World Trade Center. He was preparing for the workday when he suddenly heard a muffled boom. The building shuddered. Then, he felt it moving. “We moved about 20 feet,” Hingson recalled.

After the tower lurched back into place, Hingson’s colleague David Frank saw flames and large amounts of smoke from the office window. Debris rained down in front of the glass. And Frank became increasingly frantic.

“We gotta get out of here right now!” Frank screamed, according to Victorville Daily Press. “You don’t understand. You can’t see it!” Frank was right. After all, Hingson was blind. He’d been blind since the day he was born.

Meanwhile, Hingson’s companion, a guide dog named Roselle, emerged from the nap she was taking underneath her master’s desk. The yellow Labrador Retriever was not showing any kind of fear reaction yet — and that led Hingson to believe that his office had time to evacuate in a calm manner.

What happened next proves that the bond between this blind man and his guide dog was so much bigger than just the two of them. 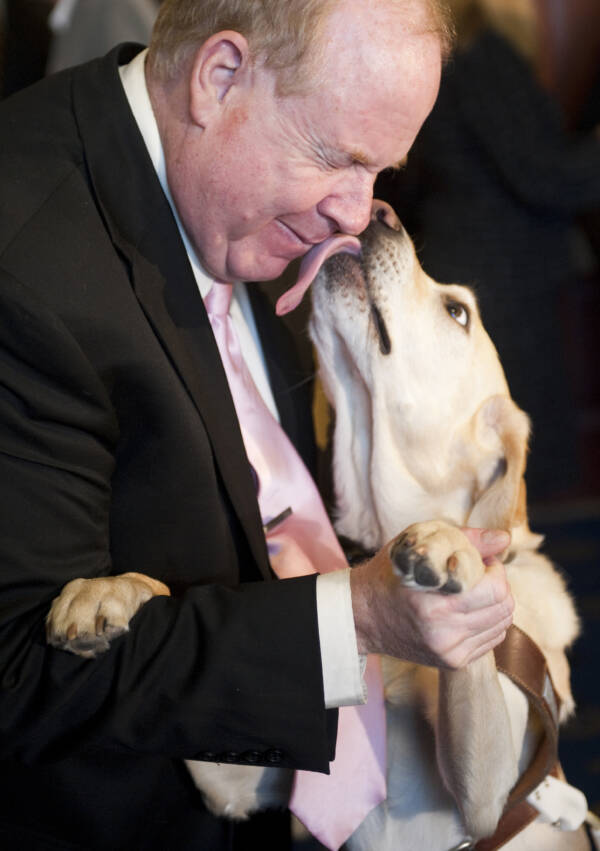 Bill Clark/CQ Roll Call/Getty ImagesMichael Hingson gets a lick from his guide dog, Roselle, who helped him evacuate the North Tower.

Hingson had good knowledge of the building’s emergency procedures. This was important for him, not only as the local leader of Quantum Corporation’s New York office but also as a blind person who couldn’t rely on signage.

Frank followed as the office workers began walking down the stairs. And as soon as Hingson and Roselle entered the stairwell, Hingson smelled a familiar smell. He soon remembered it from the airport — jet fuel.

The group started their descent of over 1,460 steps from the 78th floor. Burn victims passed them on their way down. One woman began struggling to breathe and insisted that they wouldn’t get out of the building alive.

Hingson said that he and about eight others stopped and had a group hug right there on the stairs, encouraging the woman to keep going.

“Roselle gave her kisses,” Michael Hingson remembered, according to the 9/11 Memorial & Museum. “Roselle was really good at that.”

They continued downward. Firemen passed the group on their way up to fight the flames above them. Many gave the easygoing Roselle a quick pet as they passed her. Tragically, it would likely be one of their last moments of joy.

Panic amid Hingson’s group set in again close to the 50th floor. Frank stopped, telling everyone they were all going to die. Hingson snapped back, “Stop it, David. If Roselle and I can get down these stairs, so can you.”

After that, the pair helped keep everyone else calm, as they completely trusted each other at that point. And Hingson’s encouraging words to Roselle as they descended each flight of stairs resonated with everyone.

Finally, the group reached the main lobby. However, officials instructed crowds not to leave because dangerous debris — including dead bodies — was still raining down onto the street. So Hingson and the others headed into the central complex and found another exit to walk out.

Fleeing The Collapse Of The Twin Towers 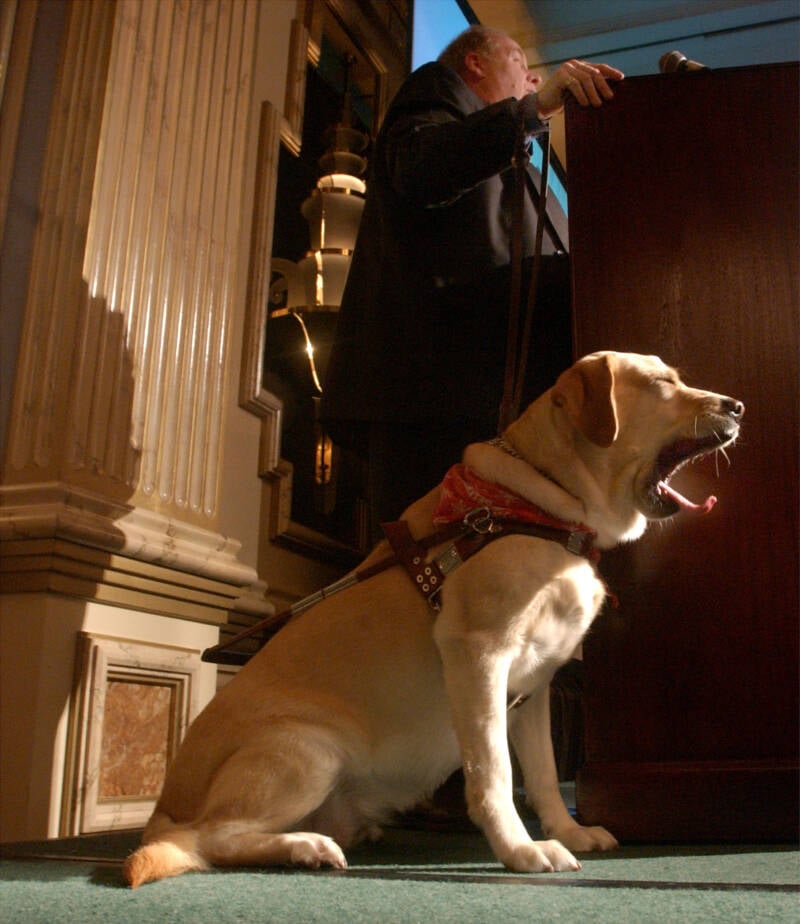 It wasn’t until they were outside that the group realized the extent of the damage caused to the World Trade Center during the 9/11 attacks. Frank saw fire in the South Tower, as well as the North. He stopped to take a picture at Vesey Street and Broadway, just a block north of the World Trade Center.

Then, Hingson heard it. A rumble he described as resembling both a “freight train and a waterfall.” At that time, the South Tower was collapsing.

Everyone turned on their heels and ran. Hingson had to rely on Roselle to lead him through the pandemonium. “The dirt and debris was so thick, I could feel it going down my throat and into my lungs,” Hingson said.

All of a sudden, Roselle stopped. Guide dogs are trained to do this when they are presented with an unsafe condition. Michael Hingson reached out.

He felt a rail and realized that Roselle had led him to the top of a flight of stairs. It was a subway station, and upon entering it, Hingson was able to catch his breath with the cleaner air that was down below.

The North Tower toppled just 10 minutes after Hingson and Roselle emerged from the subway station, leaving massive clouds of dust and debris behind.

“Oh my god, Mike. There’s no World Trade Center anymore,” Frank said to Hingson. “All I see are pillars of smoke hundreds of feet tall.” 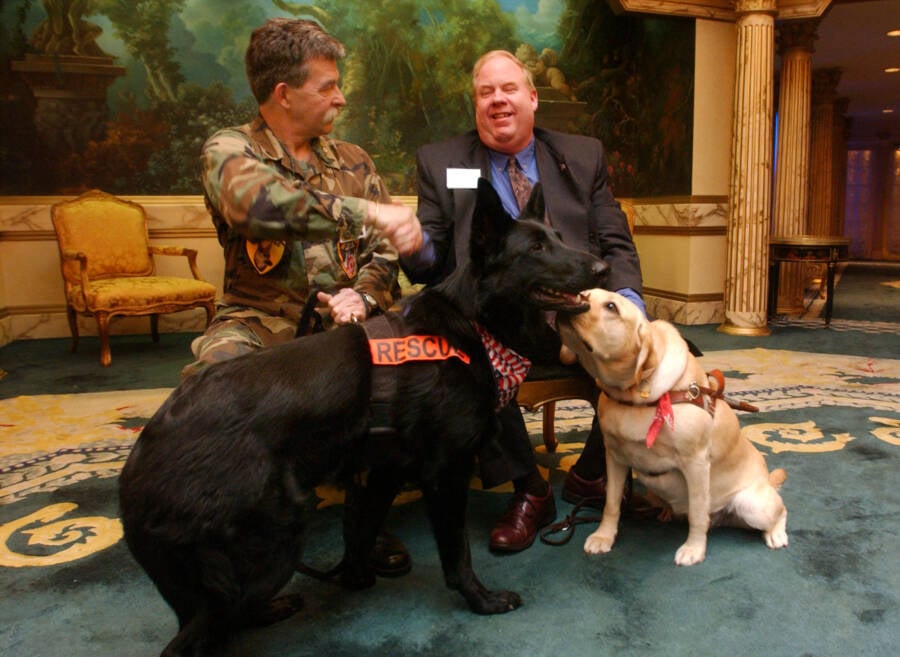 Immediately upon returning to his New Jersey home that fateful day, Hingson removed Roselle’s harness. Instead of collapsing on the floor in a puddle of anxiety, she grabbed her favorite toy and wanted to play. Roselle took her job very seriously — but now, the workday was over.

Following the tragic events of the 9/11 attacks, the uplifting story of how Hingson and Roselle escaped the World Trade Center began to spread. They made the talk show circuit and appeared on radio shows.

However, the events of that day continue to get condensed into smaller and smaller historical footnotes every year. Therefore, some people today may not have heard about Michael Hingson and his beloved guide dog.

In 2002, Roselle received an award from the American Kennel Club. It was in honor of “canine excellence” among service dogs. Two years later, a veterinarian diagnosed Roselle with immune-mediated thrombocytopenia, a disease that affects blood platelets. Hingson believes the toxic air conditions that she faced helping him escape on 9/11 caused her condition.

But the brave Roselle lived seven more years in the care of her loving family. Sadly, on June 26, 2011, Roselle passed away peacefully. Michael Hingson was right there by her side — just as she was always there for him.

Although Hingson has owned many guide dogs throughout his life, he will always have a special bond with the late Roselle. It was Hingson’s job to know where to go and how to get there, and it was Roselle’s job to get him there safely. On 9/11, he never let go of her harness. And she never wavered.

After reading about Michael Hingson and his dog Roselle, meet Hachikō, the loyal Japanese dog who waited for his master for 10 years. Then, take a look at Zanjeer, the heroic bomb-sniffing dog of India.