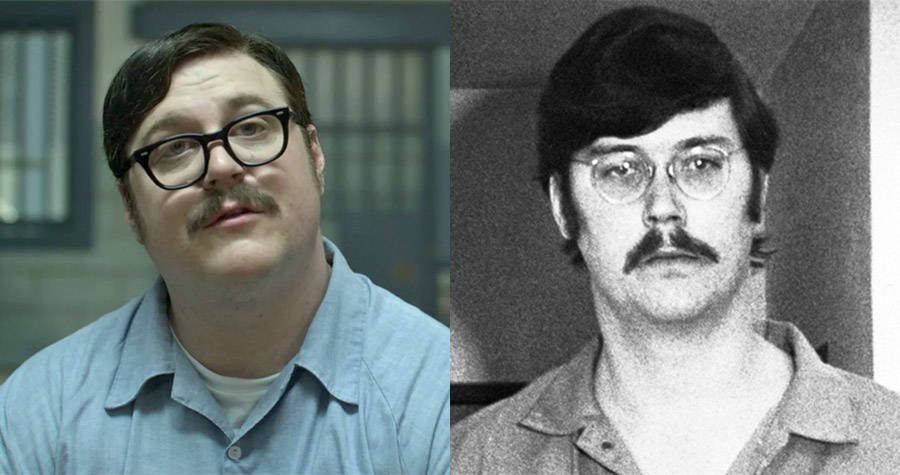 The show’s creators know a lot about Edmund Kemper, also known as the Co-Ed Killer. Scriptwriters took excerpts of actual interviews with Kemper, conducted in 1984 and 1991, and used them verbatim in the show. The side-by-side comparison is spot on.

Kemper’s childhood was a difficult one. His father, a veteran of World War II, married a woman he didn’t love and soon grew to despise.

The feeling was mutual, and his mother berated her husband constantly, often while drunk — which was almost always — and Kemper wasn’t spared her wrath. Telling him that she didn’t want to “turn him gay,” she showed the boy no affection growing up.

Kemper acted out from an early age, decapitating his sisters’ dolls and following his second-grade teacher home, stalking the woman while carrying his father’s bayonet from his time in the war.

At 10, he killed the family pet, and at 13 he killed another one, keeping pieces of the animals in his closet until his mother found them and threw them out.

After Kemper’s father abandoned the family in 1957, Kemper was the only “man” in the house and had taken the abuse from his mother for years. His mother’s standard attack consisted of telling him that there wasn’t a woman in the world who would ever love him.

By the time he was 15, Kemper was 6’4″ tall, heavily-built, and likely had an IQ above 140. Now, his mother was afraid of him, scared that Kemper would harm her daughters and so she made Kemper sleep in a locked basement at night.

Ed Kemper as portrayed in Netflix’s Mindhunter vs. the real Ed Kemper.

Kemper’s acting out was bound to escalate after such sustained abuse and his mother was right to be scared of the son she created. Kempler’s life as a serial murderer soon began when he was 15 years old, his very first victims being his grandparents.

He was sent to a psychiatric hospital after turning himself into the police and when he turned 21, he was released back into the custody of his mother.

He would murder eight more people, most of whom were strangers that he picked up as hitchhikers in California. He would often decapitate his victims in engage in acts of necrophilia.

Before his final arrest in 1973, he finally killed his mother, beating her head in with a claw hammer as she slept. He then decapitated her, used her severed head for sexual gratification, and put it on a shelf to act as a dartboard.

His last victim was his mother’s best friend, whom he invited over and then murdered her in order to steal her car so he could flee to Colorado.

He didn’t get far before he heard news reports about the murder on the radio and decided instead to turn himself into the police.

Today, he is currently serving his life sentence at a California Medical Facility.