In the summer of 2008, locals in the New York hamlet of Montauk were shaken by the discovery of a bloated and bloodless creature they couldn’t identify. It was dubbed the "Montauk Monster" — then it mysteriously vanished.

In July 2008, a strange creature washed ashore in Long Island, New York. Lying dead on the beaches of Ditch Plains, the bloated, bloodless beast looked like a monster out of a storybook, which inspired the public to dub it the “Montauk Monster.” 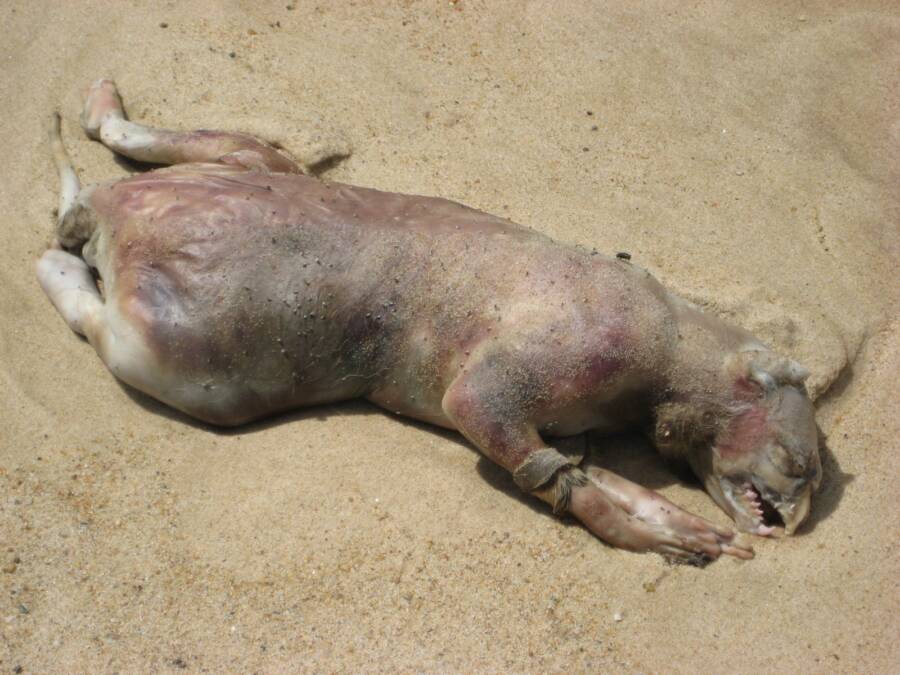 Wikimedia CommonsThe mysterious Montauk monster, as it was photographed on Long Island.

News about the monster and theories about its origin quickly spread.

People speculated that it could be the mutant result of an experiment performed at the nearby Plum Island Animal Disease Center. Others posited that it was an alien entity that had succumbed to Earthly elements.

Or, perhaps, it was merely a bizarre marketing scheme.

It didn’t take long for the director of the International Cryptozoology Museum Loren Coleman, who’s largely credited with coming up with the name “Montauk Monster,” to launch an extensive investigation of the creature.

As an expert in animals whose existence is disputed (like the Loch Ness Monster, for instance), Coleman appeared to be the perfect fit for the job — if only Montauk locals would speak with him.

Coleman noted that, strangely, “these people put up a brick wall around themselves.”

What did they know about the Montauk Monster — and did it frighten them to silence?

On July 12, 2008, Jenna Hewitt and her friends Rachel Goldberg and Courtney Fruin hit the beach at Ditch Plains. The hot summer Saturday made for ideal conditions to stroll, but as the group of East Hampton natives continued, they came across a heart-stopping sight.

It looked like a sunbaked dog carcass with strange bindings around its legs. But it didn’t seem like the right size to be a dog, and instead of a snout, the creature seemed to have a beak. Hewitt took a photo of the dead animal— which then spread like wildfire across the internet.

The East Hampton Independent was the first media outlet to cover the bizarre find. Their story, published on July 23 with a cheeky headline, “The Hound of Bonacville” — which is a play on the nearby area of “Bonackers” and Sir Arthur Conan Doyle’s The Hound of the Baskervilles — made some local waves. 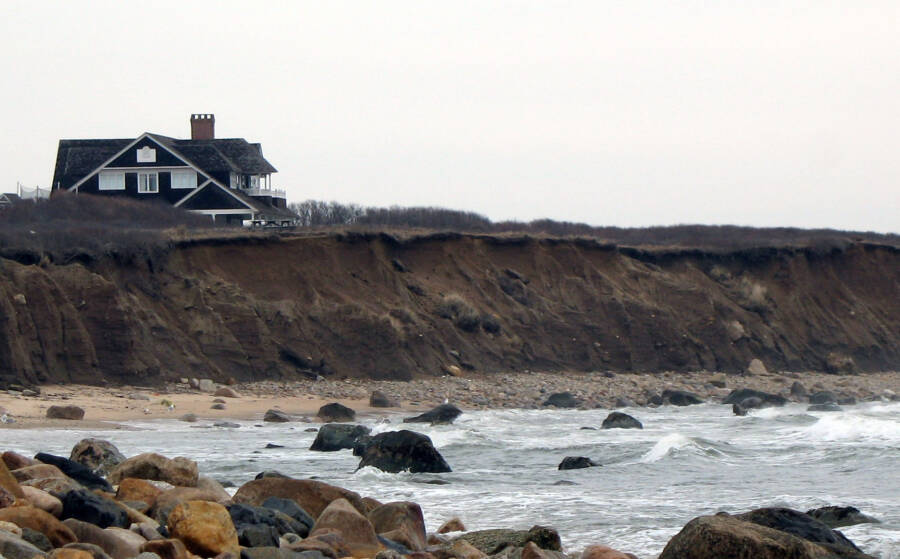 The 87-word post was full of snark and heavily suggested that the Montauk Monster was a marketing stunt, but the bizarre photo made an impact and the story hit the national stage, appearing in outlets like Fox News and The Huffington Post.

Conspiracy theorists around the globe perked up and Coleman, who had a finger on the pulse of weird animal discoveries, was among those who wanted to know more.

But by the time Coleman arrived in New York to inspect the creature, its carcass was nowhere to be found. It appeared that somebody had purposefully removed it — sending suspicious onlookers into a tailspin.

A Discovery clip on the secretive Plum Island facility.

Coleman was unable to see the creature with her own eyes. According to one local, the creature had decomposed beyond recognition, “Now it’s just skull and bones,” before a “guy” who Hewitt refused to identify took the carcass into the woods near his house.

Hewitt has since declined any further interviews.

Meanwhile, the three young women who’d found the monster allegedly seemed to vanish from the media, as well. Coleman was left with few clues to work with.

Although the locals who claimed to have seen its decomposed carcass before it vanished, said it was no bigger than a cat, and any conclusions of its origin and identity would now have to be theoretical.

As such, some experts have come to view the whole situation as a farce. According to William Wise, director of Stony Brook University’s Living Marine Resource Institute, the creature was likely either a coyote or a dog that had “been in the sea for a while.”

He added that the creature was likely not a rodent, sheep, or raccoon. Others posited the creature was a turtle without a shell, but Wise disagreed. Turtles don’t have teeth, where the Montauk Monster certainly did.

On the other hand, rumors have spread that the beast was an escaped mutant from Plum Island’s nearby Animal Disease Center. Local cable reporter Nick Leighton said he spoke with the three women before they shielded themselves from the media and said their talk on July 31 included coy chatter about the Plum Island narrative, and that Goldberg showed him an alternate photo of the creature from an entirely new angle.

Nick Leighton visited the Plum Island facility two years after the Montauk Monster scandal. He reported that security was so tight that it seemed unlikely anything could escape.

Leighton added that he had to get government approval in order to bring a TV crew along with him and that the crew wasn’t allowed to take anything from the facility, including an opened bottle of water.

Then, Leighton hit on what could be the solution to this bizarre mystery.

After Some Solid Theories, The Mystery Endures

During his investigation, Leighton heard rumors of a dead animal that was given a Viking funeral, during which it was burned and sent afloat on the sea in flames. It seemed plausible that the “honored” creature had washed ashore Ditch Plains burned and disfigured.

This theory gained credibility when an unidentified local told reporter Drew Grant that they had found a dead raccoon on nearby Shelter island in late June 2008.

“This creature was honored with a Viking funeral, not merely explored for crass entertainment,” they said. “In the interest of full disclosure, this did happen shortly after a waterboarding endurance competition, and just before a clothespins-on-your-genitals challenge [held among friends].” 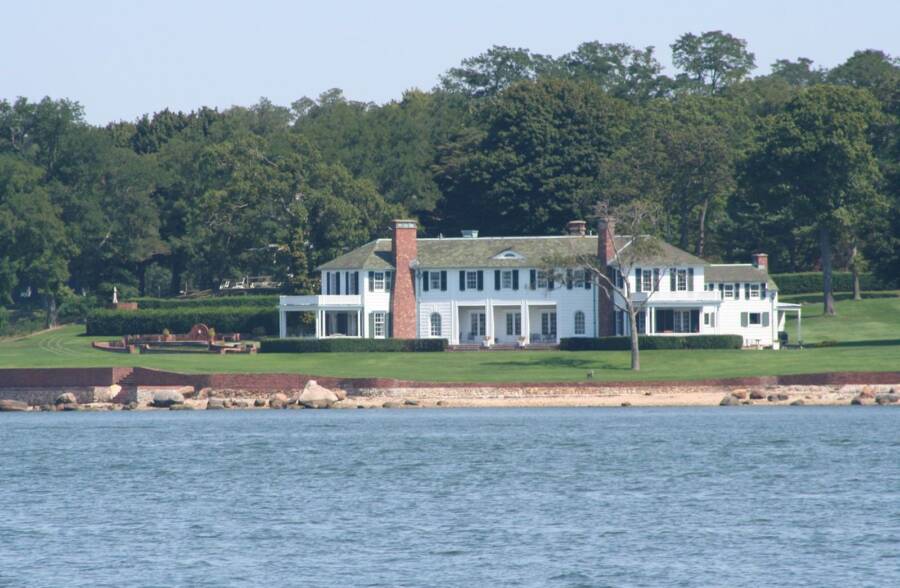 Wikimedia CommonsThe most logical explanation appears to be a Viking funeral for a dead raccoon found on Shelter Island, pictured here.

Ultimately, it appeared as though the creature was but some kind of dead or singed mammal. Indeed, Discovery officially speculated that it was probably a raccoon.

As for the bindings on its legs, however, one sad theory speculates that the Montauk Monster could have been a pit bull that was forced into a dog fight where it was fatally injured or killed. Then, after about two weeks of sizzling in the sun and bloating to unidentifiable proportions, the creature washed ashore Ditch Plains.

Even Coleman concurred with this explanation. In his opinion, the Montauk Monster does not belong alongside the ranks of the Yeti and agrees that it’s likely a raccoon.

However, the carcass was never examined or tested, and of course, the “dead-raccoon-burned-on-a-raft” theory remains disputed. Some remain adamant that the creature was something else entirely.

Indeed, the isolated tip of Long Island has been home to other alleged paranormal events, such as the Montauk Project, which supposedly launched time travel experiments at the Montauk Air Force Base.

When Ellen Killoran wrote about the Montauk Monster for the Observer in 2008, an acquaintance told her that Montauk is a place “with a lot of secrets.”

For reporter Drew Grant, there’s nothing else to do but accept the fact that the legend of the Montauk Monster will live on unsolved. “It’s going to be one of those mysteries forever.”

After learning about the Montauk monster, read about 17 real-life monsters and the truth behind each. Then, learn about the Flatwoods Monster.