Inside The Legend Of The Flatwoods Monster, The West Virginia Cryptid That Sparked An Air Force Inquiry

After seven Braxton County, West Virginia residents reported seeing the Flatwoods Monster while investigating what looked like a UFO crash, local authorities scoured the scene — but they found nothing and reportedly "laughed off the reports as hysteria."

One clear evening in September 1952, several boys in Flatwoods, West Virginia spotted a strange object streak through the sky. It appeared to land in a nearby field, so they headed over to investigate — and reportedly came across a 10-foot-tall creature that’s since become known as the “Flatwoods Monster.”

The mother of two of the boys, Kathleen May, and a teenage National Guardsman, Gene Lemon, were two members of the group who claimed to have seen the monster. They went on to give interviews to reporters and even shared their encounter on national television, spreading the story of the Flatwoods Monster across the country.

Local police found no evidence to back up their claims, and a subsequent investigation by the U.S. Air Force concluded that there was nothing paranormal about what they had seen. But the seven witnesses remained adamant that whatever had happened that September night was anything but ordinary.

There have been no reported sightings of the Flatwoods Monster since 1952, but the mysterious cryptid continues to draw visitors to rural Braxton County, West Virginia to this day.

The Legend Of The Flatwoods Monster

On September 12, 1952, a group of boys was playing in their schoolyard in the tiny town of Flatwoods, West Virginia. One of them suddenly gave a shout that turned all of the children’s attention to the sky above. According to HISTORY, they saw a pulsing red light that streaked through the air and crashed onto a local farm.

Two of the boys, 13-year-old Ed May and his 12-year-old brother Freddie, ran home with their friends to tell their mother, Kathleen, what they had seen. Mrs. May and the five young boys were joined by a 17-year-old National Guardsman named Gene Lemon and the Mays’ family dog as they trekked to the farm to investigate.

As they approached a wooded area near an open field, they noticed an odd mist. Lemon then thought he spotted a pair of glowing eyes in a tree. Suddenly, a “Frankenstein-like monster” emerged directly in front of them. 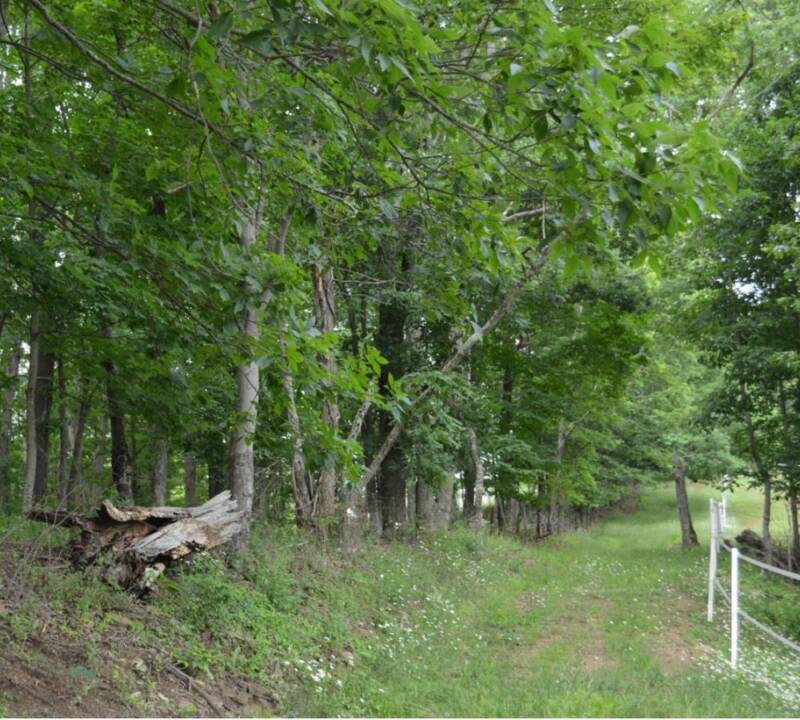 Lemon later described the creature as “a 10-foot monster with a blood-red body and a green face that seemed to glow.” Its head was shaped like a spade, it had clawed hands, and it seemed to be wearing a dark, metal dress.

The group immediately turned and fled. A local high schooler later recalled what he’d heard about the incident: “One of the boys peed his pants. Their dog ran with his tail between his legs.”

The terrified witnesses immediately informed the police about what they’d seen — and they weren’t the only ones.

Additional Sightings Of The Flatwoods Monster

When investigators went to the farm to corroborate what Mrs. May and the six boys had seen, they found nothing amiss. A local newspaper wrote at the time that “state police laughed off the reports as hysteria.”

However, the Sept. 12th sighting wasn’t the only recorded incident regarding the Flatwoods Monster. According to the official website of Braxton County, West Virginia, multiple other residents had encounters with similar unexplainable beings around the same time. 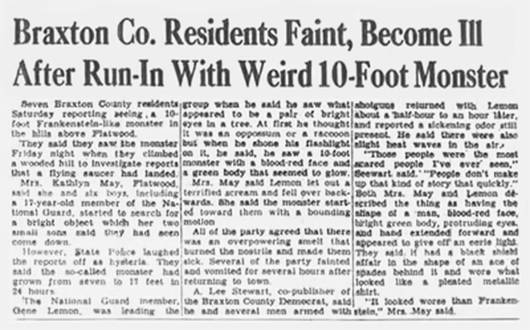 Wikimedia CommonsLocal newspapers were quick to seize upon the strange story

Several days before the event in Flatwoods, a woman named Audra Harper who lived five miles north of Flatwoods said she was walking through the woods with her friends when they saw a ball of fire on a hill. They thought nothing of it, assuming a farmer was simply burning something in his field.

However, when Harper glanced back, she saw the dark silhouette of an eerily tall man emerging from the spot where the flames had just been blazing.

Then, on Sept. 13th, a young couple was driving on a rural route 20 miles south of Flatwoods when their car broke down. George and Edith Snitowsky were with their 18-month-old son and were desperate to get their vehicle back on the road as darkness fell.

Suddenly, they smelled sulfur, and a bright light filled the sky. When they looked up, there was a 10-foot-tall monster hovering in front of them. It had clawed hands and a reptilian head. The creature touched their car before drifting into the nearby woods — and the vehicle suddenly started again. 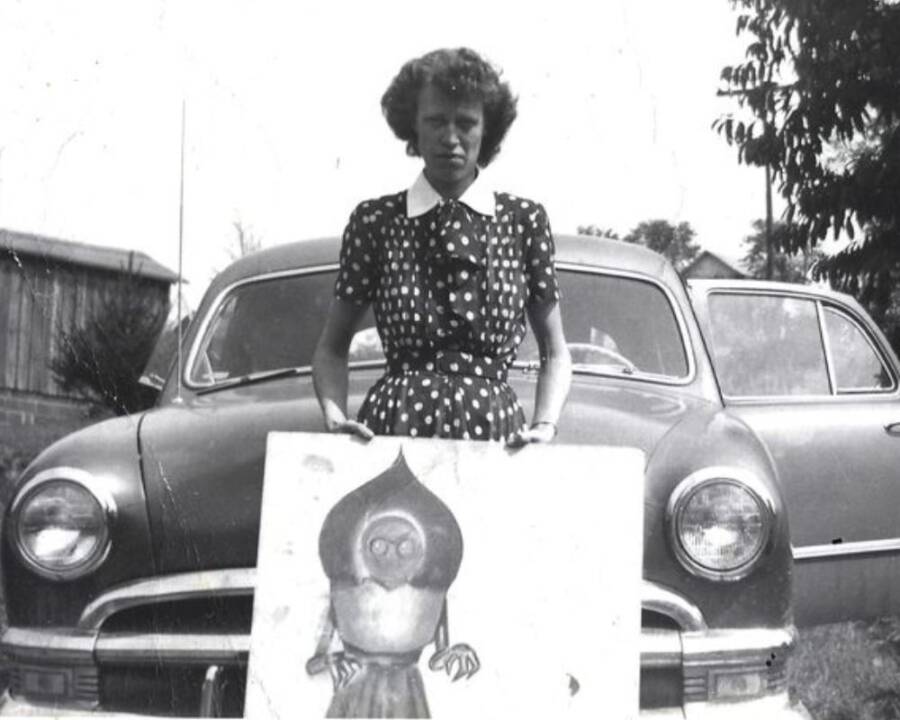 However, these incidents didn’t get nearly as much attention as the sighting by Mrs. May and the six boys. Their story quickly spread, and the Flatwoods Monster was soon making headlines across the country.

Though local police almost immediately dismissed the story of the Flatwoods Monster as hysteria, others weren’t so sure.

One newspaper publisher who spoke with Mrs. May and the boys immediately after the incident said, “Those people were the most scared people I’ve ever seen… People don’t make up that kind of story that quickly.”

Mrs. May and Gene Lemon were invited to New York to speak about their experience on CBS, and news of the monster soon spread so far that even the U.S. Air Force got involved. Their conclusion, however, was similar to that of local police. 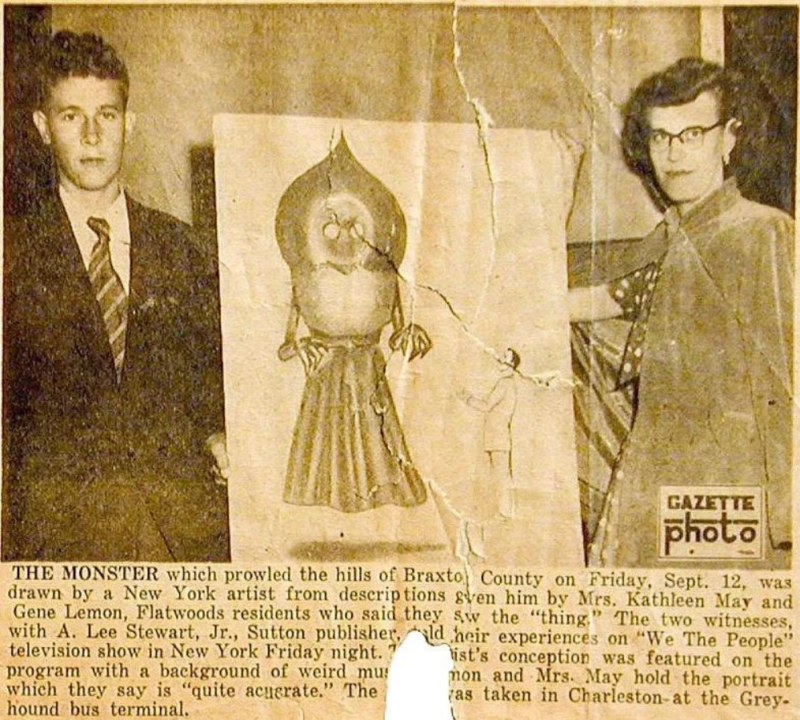 The Air Force determined that the streak the boys had seen in the sky was a meteor, which had also been spotted 300 miles away in Baltimore at the very same time. As for the clawed monster with glowing eyes? It was simply an owl, investigators said.

The mystery of the Flatwoods Monster endures to this day. Roadside America reports that the tiny West Virginia town has embraced the legend, and there’s even a museum dedicated to the cryptid that attracts believers of the paranormal from far and wide. We may never know the truth about the Flatwoods Monster — but the legend will continue to live on.

After reading about West Virginia’s Flatwoods Monster, learn the Native American legend of the Wendigo, the frostbitten monster of your nightmares. Then, discover the truth about the Mothman, another famous West Virginia cryptid.