Paleontologists also found 80 skeletons of Mussaurus dinosaurs near the nest — proving that they lived in herds. 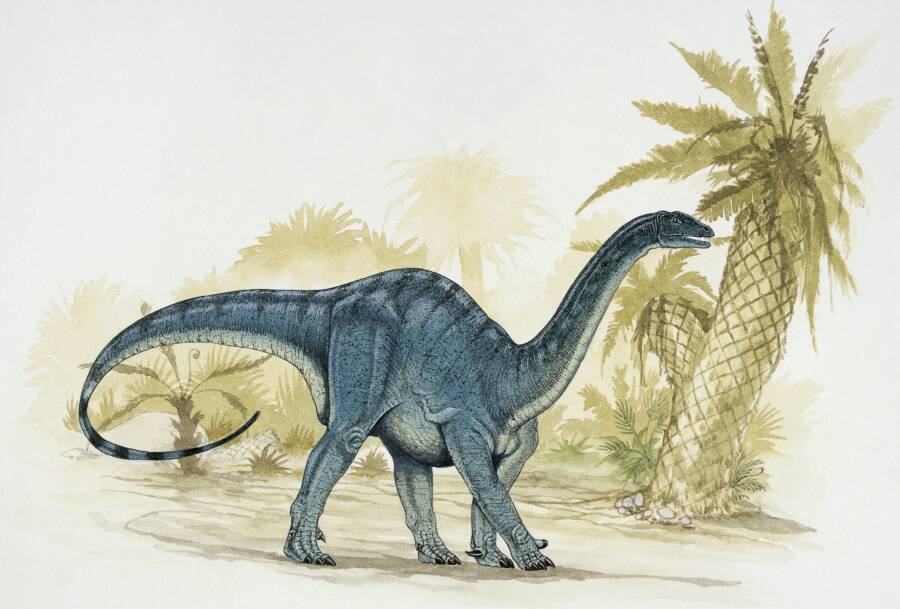 Moving in herds has been a lifesaving evolutionary trait of herbivores for millions of years, as traveling in large groups provides for more protection from predators. Remarkably, researchers in Argentina have just discovered the earliest evidence that dinosaurs did the same — 40 million years earlier than they initially theorized.

During an examination of a 193-million year old dinosaur graveyard researchers discovered over 100 eggs, some with embryos still intact, and 80 skeletons, all from a distant cousin of the Brontosaurus called Mussaurus patagonicus.

As published in the Scientific Reports journal, the study thus posited that these dinosaurs traveled in packs of similar size and age before dying in a sudden drought. An earlier dig of the area in the 1970s uncovered Mussaurus skeletons that were only six-inches long. Mistaking them for adults, when the specimens were actually from newborns, they nicknamed the dinosaur “mouse lizard.” But now they know better.

In 2012, paleontologist Diego Pol decided to re-explore the area. In 2013, he found the first adult specimens — intertwined. This new evidence showed that the dinosaurs in question actually grew to weigh just under 2 tons, reaching lengths of 26 feet.

And while those early discoveries provided scientists with more info than they could have ever imagined in terms of the living structure of these extinct giants, their most recent discovery is truly expansive. 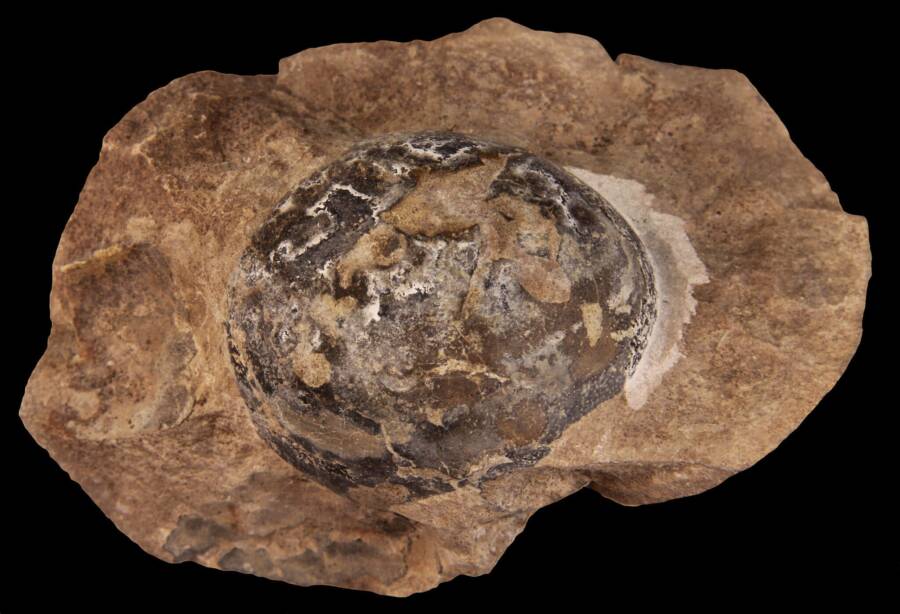 American Museum Of Natural HistoryA fossilized Mussaurus egg, which would have only reached maturity 15 years after hatching.

“I went to this site aiming to find at least one nice dinosaur skeleton,” says Pol. “We ended up with 80 skeletons and more than 100 eggs (some with embryos preserved inside!)…I remember lifting part of the concretion and I saw that there was a top of a skull right there, and the neck was going into the rock,” said Pol. “I knew this was something different.”

After transporting 30 of the eggs from their nesting ground to a lab in Grenoble, France, Pol and his peers confirmed the dinosaur species with x-ray technology without damaging the shells. Analysis of the bones showed that most of the juveniles were less than a year old and buried together — like some of the adults.

“They were resting together and likely died during a drought,” said Pol. “This is compatible with a herd that stays together during many years and within which the animals get close to each other to rest, or to forage, or do other daily activities.” 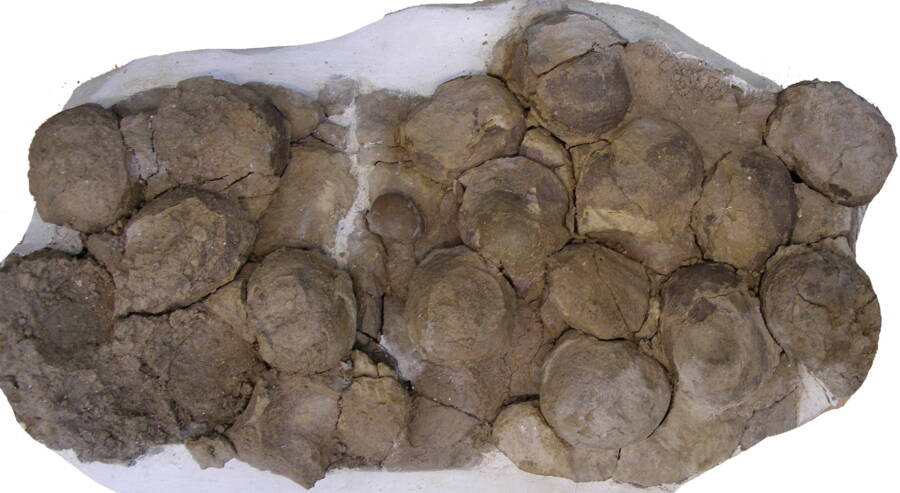 Diego Pol/Scientific ReportsThe eggs were found in clusters of eight to 30 and were the size of average chicken eggs.

The study suggested that living in herds may have been one of the key traits of this species’ survival, with juveniles sticking together as adults foraged for food — and thwarted predators. Minerals found in the volcanic ash atop the eggs, meanwhile, proved these fossils were much older than anyone had expected.

Prior to this discovery, paleontologists believed herding behavior was exclusively relegated to dinosaurs of the Cretaceous period. The earliest fossilized evidence of sauropod herds had only been 150 million years old, after all. The analyzed minerals in the volcanic ash, meanwhile, was 193 million years old.

As a result, researchers had to reassess their previous beliefs that the Mussaurus species lived during the Triassic period between 221 and 205 million years ago and died off during a mass extinction event. It clearly survived, instead, and most likely continued to thrive precisely because of its herding behavior. 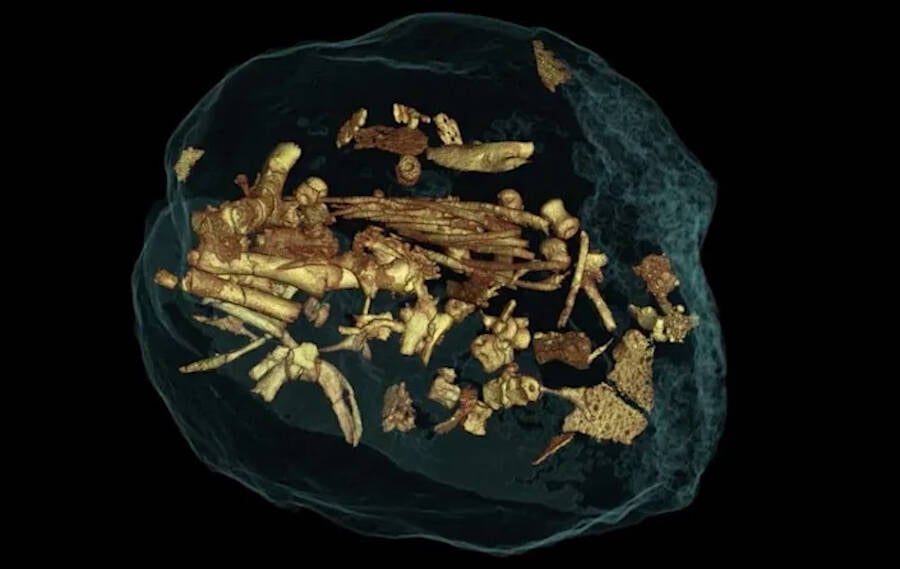 Vincent Fernandez/Diego Pol/European SynchrotronX-rays of the eggs allowed confirmation of the embryo species inside without damaging the shells.

Ultimately, the new study has not only presented the earliest evidence of herd behavior within dinosaurs but forced paleontologists to reassess the timeline of this particular species. In the end, the Mussaurus patagonicus miraculously survived an extinction event — only to band together and thrive thereafter.

“This is the time when they actually ‘conquered’ the world — when they became dominant, when they first succeeded in ecological terms, in evolutionary terms,” said Pol. “What are the keys for dinosaurs’ success? Here, we’re saying: Hey, behavior may have been one of the causes.”

After reading about the earliest evidence of dinosaurs living in herds, learn about the Nodosaur dinosaur mummy revealed with its guts and skin intact. Then, read 31 dinosaurs facts that will blow your mind.