One of the telescope's backup gears, called a gyroscope, had been shut off for 7.5 years.

As intelligent as the employees at NASA are, this latest report reveals that even the brightest minds sometimes attempt to fix technological difficulties just like the rest of the world usually does.

NASA’s Hubble Space Telescope ran into some issues that required it to be put into safe mode on Oct. 5 “due to a failed gyro,” or gyroscope.

Gyroscopes are used to help the telescope rotate and lock in on new targets.

NASA subbed in a backup gyroscope but ran into trouble once it started up. The backup gyro had apparently been turned off for 7.5 years, and when the Hubble operations team turned it on the gyroscope reportedly spun at “extremely high rotation rates.”

At that point, NASA stated that they put the telescope through a “running restart,” a procedure that “turned the gyro off for one second, and then restarted it before the wheel spun down.”

Or, basically, switching it on and off.

However, NASA’s complete process for fixing the malfunctioning Hubble Telescope is definitely more complex than that.

In a press statement, NASA described their process as follows:

“In an attempt to correct the erroneously high rates produced by the backup gyro, the Hubble operations team executed a running restart of the gyro on Oct. 16. This procedure turned the gyro off for one second and then restarted it before the wheel spun down.

“On Oct. 18, the Hubble operations team commanded a series of spacecraft maneuvers, or turns, in opposite directions to attempt to clear any blockage that may have caused the float to be off-center and produce the exceedingly high rates.

“During each maneuver, the gyro was switched from high mode to low mode to dislodge any blockage that may have accumulated around the float.”

And this ultimately worked.

The Hubble Space Telescope is an immensely important tool for astronomers at NASA, as well as around the world. It was launched into space in 1990 and is described by NASA as one of the most significant advances in astronomy since Galileo’s telescope. 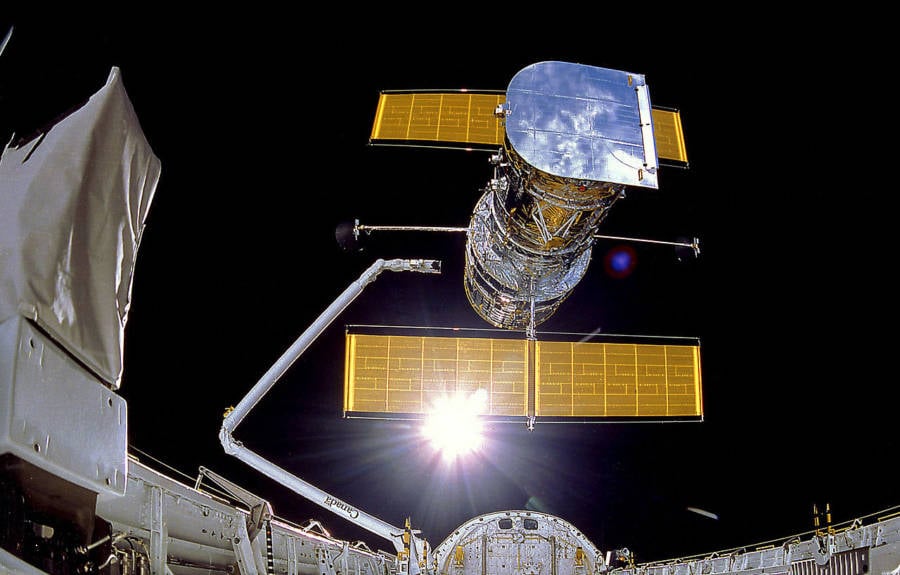 Wikimedia CommonsThe Hubble Telescope during its deployment in 1990.

Hubble uses a digital camera to send pictures from the furthest points in the galaxy back down to Earth via radio waves. Hubble photographs have allowed scientists to make such discoveries as the estimated age of the universe at 14 billion years, and the groundwork for the big-bang theory.

Given its importance, NASA employees who work to maintain Hubble were sent into a panic after these subsequent gyro malfunctions.

Luckily though, the Hubble operations team has reported that this issue has been resolved.

“Hubble going down to one-gyro mode would in particular have hampered our efforts to characterize extrasolar planet atmospheres in the years running up to James Webb,” research scientist Jessie Christiansen at the NASA Exoplanet Science Institute said in an interview. “So this is a huge relief!”

That being said, NASA has confirmed that they will perform additional testing on Hubble to make sure that a stress-inducing situation like this one doesn’t happen with the telescope again.

Next, read this story about NASA sending sperm into space. Then, learn about the most important image captured by the Hubble Telescope.