Donald Crowhurst And His Doomed Attempt To Sail Around The World

British businessman Donald Crowhurst entered the 1968 Golden Globe Race to sail around the world, only to meet a tragic end in the Atlantic. 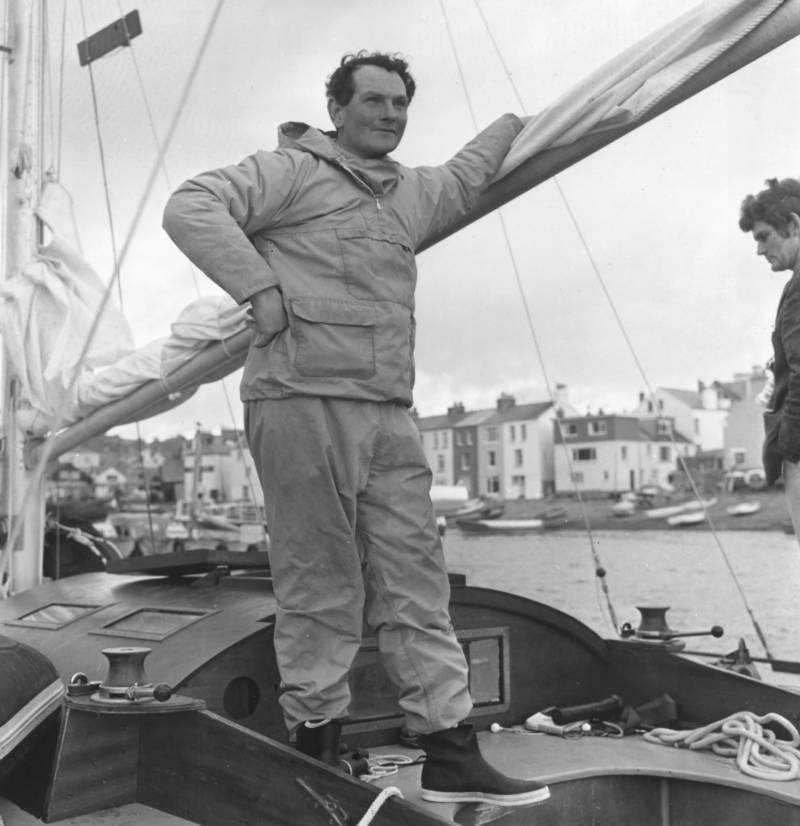 Donald Crowhurst was always an optimist and always a lover of the sea. He frequently took his family on short sailing excursions off the southwestern coast of his native Britain and into the Bristol Channel. Then, one day, he saw a way out of his financial problems caused by failed business ventures: An around-the-world sailing race that offered a sizable sum for a prize.

But despite his optimism and his love of the sea, Donald Crowhurst wasn’t prepared for the unforgiving ocean.

Donald Crowhurst was born in British-controlled India, where his father worked on the railways, in 1932. Crowhurst spent his childhood there before returning to the family’s native Britain soon after India gained independence in 1947.

Upon returning, Crowhurst joined the Royal Air Force, but his military career was a short one. The RAF kicked him out for disciplinary problems, and then the British Army expelled him, also for disciplinary reasons.

After the military, Crowhurst studied electronics engineering and decided to make that his career. He was also a racecar driver on the side, a sign of his eternal sense of adventure.

The aspiring electronics inventor married a young woman named Clare O’Leary in 1957 and started his own business. Electron Utilisation, Crowhurst’s company, manufactured the Navicator, a device that used radio signals to determine a boat’s position on the water. Back when Crowhurst was sailing, such high-tech tools weren’t generally used to navigate the ocean.

But when business started to fail, Donald Crowhurst turned to the ocean for money — and that proved to be his undoing. 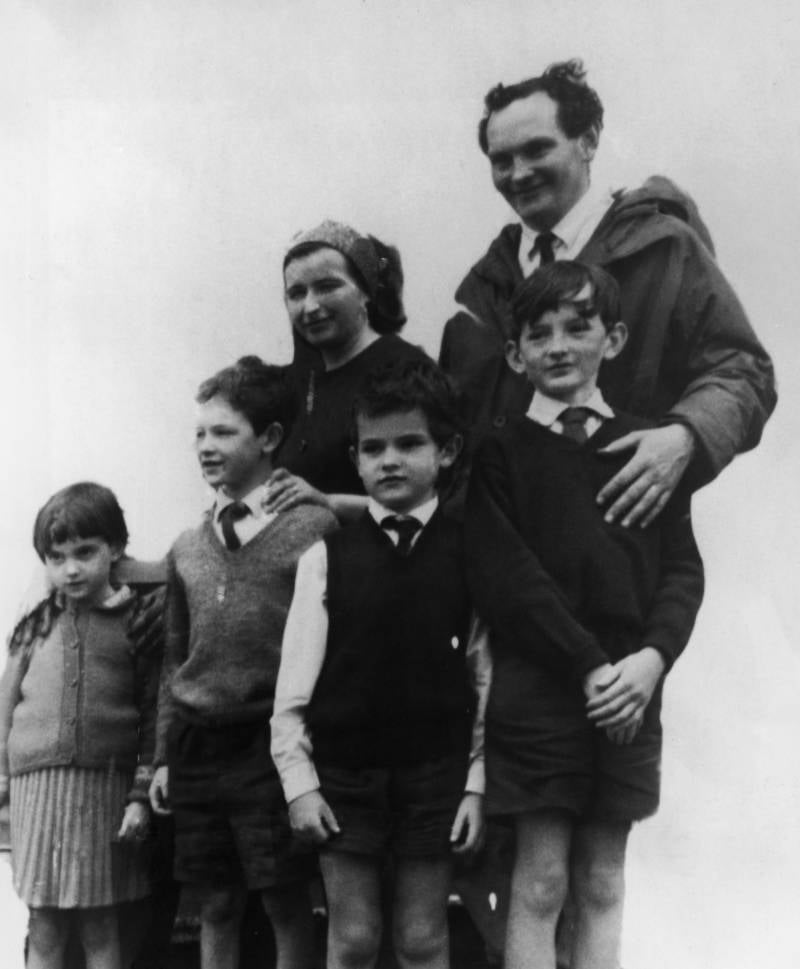 Eric Tall/Keystone/Hulton Archive/Getty ImagesDonald Crowhurst with his wife, Clare, and their children (left to right: Rachel, Simon, Roger, and James). Circa Oct. 1968.

Donald Crowhurst had four children to take care of and when business slowed, he needed a way to make money quickly.

Enter the Golden Globe Race, sponsored by the Sunday Times.

It was 1968 and much of Great Britain was in a frenzy about sailing. Adventurer and millionaire Francis Chichester had just sailed his yacht, the Gipsy Moth, around the world by himself in record time the year before. Chichester came home to a hero’s welcome. Queen Elizabeth II knighted him. In the midst of the tumult of the late 1960s, Britain needed something positive to latch onto, and this was it.

Newspapers, including the Observer and the Sunday Times, then sponsored competing single-handed, non-stop, around-the-world races to see if someone could best Chichester’s remarkable achievement and the latter offered a prize equivalent to about $75,000 today.

Crowhurst heard about the race and he adored Chichester. Chichester, like Crowhurst, spent time in the RAF. Surely, if Chichester could circumnavigate the world by himself, an electronics engineer with military experience could do the same thing, right? 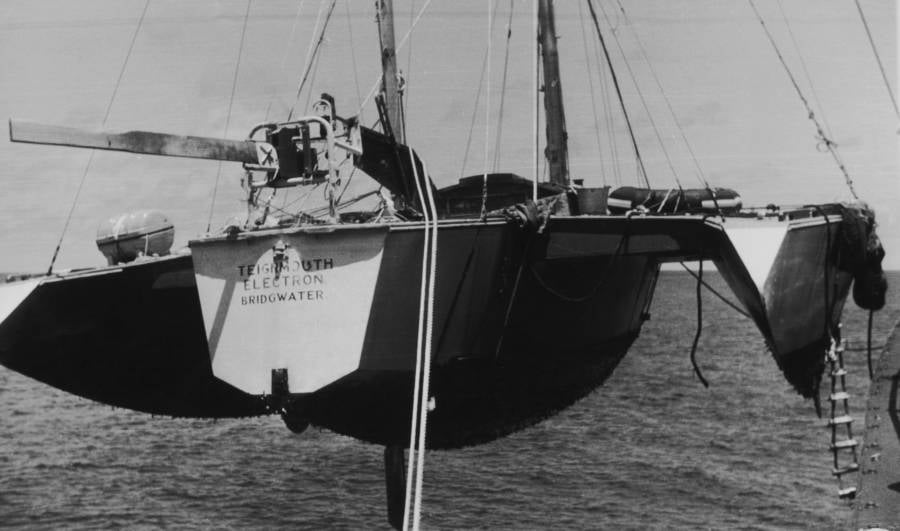 Despite being only an amateur sailor, Donald Crowhurst convinced millionaire entrepreneur Stanley Best to sponsor his entry into the race. Crowhurst used the sponsorship money to build a boat called the Teignmouth Electron.

But Crowhurst didn’t have a lot of time to build the boat, and the sponsorship money wasn’t a lot. The electronics engineer hired a boatyard in Norfolk to construct the boat. Based on the money he had on hand, and the quick turnaround time needed, builders constructed the interior hull out of plywood. Hatches weren’t sealed properly, and the boat leaked.

What’s more, on the day of his departure, Crowhurst left vital safety equipment behind.

Ever the optimist, Crowhurst nevertheless set sail from the starting point of Teignmouth, Devon on Oct. 31, 1968, the last possible day allowed for departure. Several sailors already had a good head start on Crowhurst. However, the competition wasn’t against the other eight people in the race, but against the clock. The aim was to become the fastest of the nine entrants to circumnavigate the globe.

But speed wasn’t in the cards for Crowhurst. During its pre-race sea trials, the Teignmouth Electron had sailed the English Channel to determine if it was seaworthy. It was a journey that should have taken three days but instead took two weeks. The outlook for Donald Crowhurst wasn’t good.

Facing a fast-approaching deadline for the race following the sea trials, and knowing that he’d mortgaged his house against the sponsorship money, Crowhurst made the fateful choice to soldier on despite all the warning signs thus far. He could give up now and face defeat and possibly face financial ruin, or attempt his around-the-world quest against impossible odds in an ill-equipped boat that could take his life.

Donald Crowhurst’s wife and kids saw him off on Oct. 31, 1968. It would be the last day they saw him alive. His last words to his son, Simon, were something to the effect of “Look after your mother.”

His family watched as the tiny sails of the 35-foot boat disappeared over the horizon. Clare knew things could go horribly wrong. Her husband tearfully told her that the boat wasn’t ready. However, the die was cast. He’d made his choice. He wanted to take care of his family.

After he set off, Clare and the kids (Simon, James, Roger, and Rachel) tracked his movements on a map. He maintained radio contact when he could. But the family realized early into the journey that he was in trouble. Crowhurst’s boat was simply too slow and too small to make up any time under wind power.

Then, there was silence for 11 weeks. The family didn’t hear anything from the radio. Then, a miracle. Donald Crowhurst radioed in that he had traversed 243 nautical miles in one day. At the time, that was a sailing record.

He could actually win the 30,000-mile race in record time if he could keep up that pace. He was making great time around South America and into the Pacific Ocean. Crowhurst even said he was rounding the Cape of Good Hope in Africa, known for its treacherous seas.

But it was all a lie. 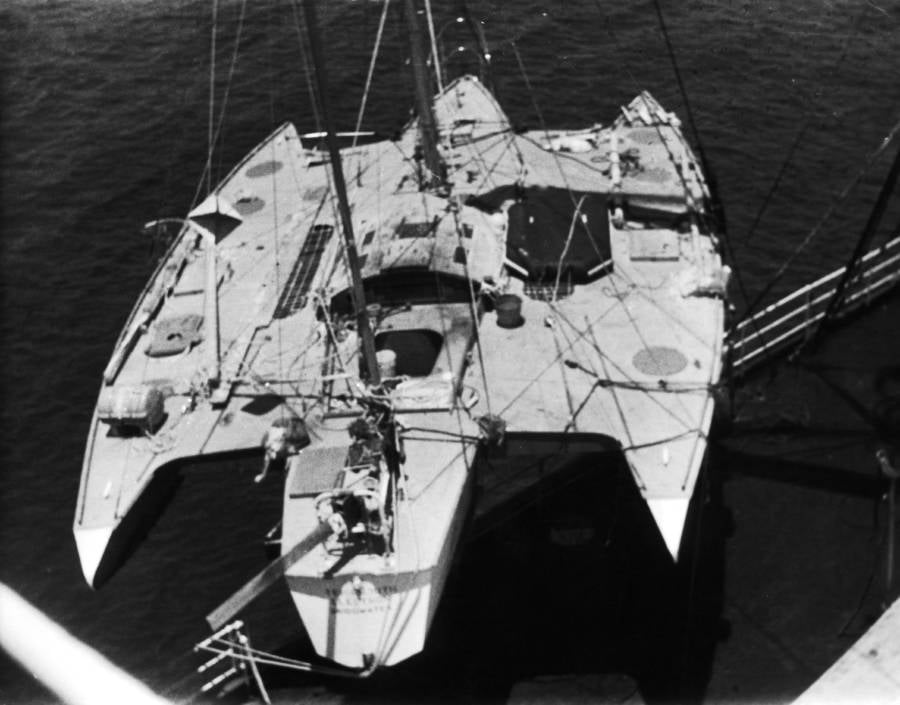 Daily Express/Hulton Archive/Getty ImagesThe Teignmouth Electron is hoisted aboard the Picardy after being found drifting unmanned in open ocean on July 10, 1969.

Ultimately, the last weeks of Donald Crowhurst remain a mystery. But the facts we do know about the time leading up to his death in July 1969 certainly hint at the bizarre tragedy of his final chapter.

Eight months after Crowhurst set sail in the Teignmouth Electron, his boat was found by a passing ship in the mid-Atlantic. Investigators found the log book, navigational charts, and maps on board. But Crowhurst himself was nowhere to be found — and quickly presumed dead.

Simon, Crowhurst’s second-oldest son, remembered the day he found out about his father’s death. He was just nine years old:

“My memory was two nuns coming down the drive and speaking to my mother, and my mother taking us to the bedroom I shared with my younger brother, Roger. She sat us down on the bed, said the boat’s been found and he’s not on it. Then she broke down in tears.”

What had happened to the jovial, happy-go-lucky father of four? Why did he embark on this tragic journey and how did it end?

Clare reflected on the choices that the family had made ahead of the race:

“You know, I never thought he would raise the money. Then he was so full of excitement. Of course I wish I’d said, ‘Don’t go.’ But at the time I thought he was doing the right thing – I was not being brave, but being loyal to his dream, as a wife.”

Crowhurst believed he could win the race, and his family believed in him. But the logbook, recovered aboard the empty boat, told a different story.

From the outset, the logbook showed that Crowhurst doubted he could go very far. “Racked by the growing awareness that I must soon decide whether or not I can go on. What a bloody awful decision–to chuck it in at this stage!”

What ultimately happened to the lone sailor?

No one knows for sure, but many believe he suffered a mental breakdown and eventually committed suicide.

If Donald Crowhurst had just held on for 10 more days, he likely would have lived. 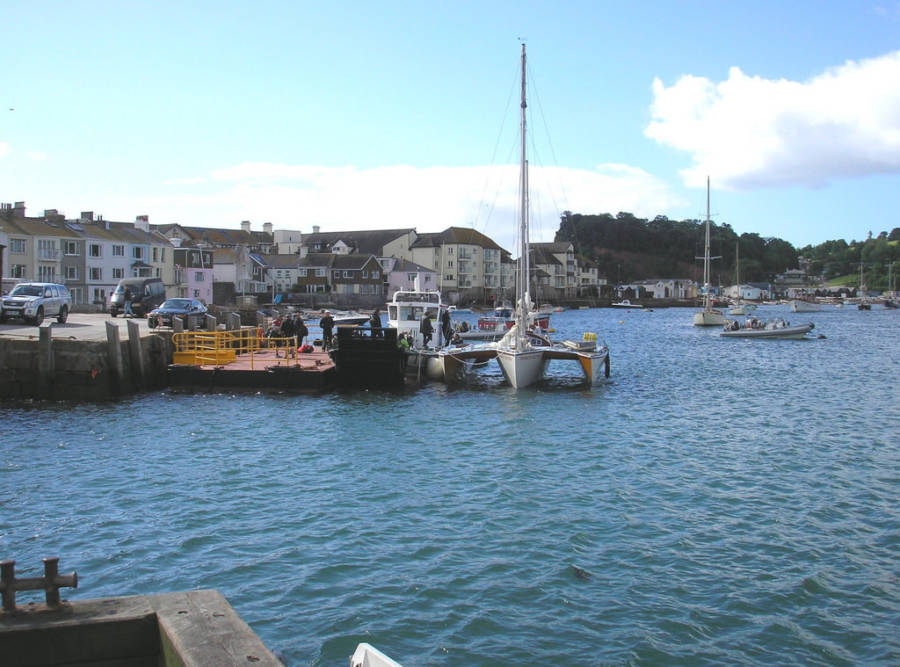 Barry Lewis/FlickrA replica of the Teignmouth Electron as part of a set for a movie about Donald Crowhurst. 2015.

In the weeks after Donald Crowhurst’s death, intense media scrutiny made things harder on the family than they already were. However, race winner Robin Knox-Johnston, an experienced sailor with the Royal Navy, donated the prize to Crowhurst’s widow and kids after learning of the tragedy.

While that may have been a nice surprise in the short-term, Clare of course thought of her husband every day following his death, often wondering whether or not she could have convinced him to abandon the race.

This tragic story finally reached a larger audience than it ever had before in 2018, upon the release of The Mercy, a film starring Colin Firth as Donald Crowhurst in his final weeks. Simon said that Firth truly captured the essence of his father’s personality.

The trailer for The Mercy.

As for the Teignmouth Electron, it now sits as a beat-up shrine on Cayman Brac in the Caribbean. Looters removed the nameplate as a souvenir and someone spray painted the name “Dream Boat” on the wooden wreckage.

It’s a ghost of a ship, now in tattered pieces. It’s much like the hopes of Donald Crowhurst, who tried desperately to save his family but only ended up causing them so much pain and heartache in the end.

After this look at Donald Crowhurst, read up on Tami Oldham Ashcraft and the true survival-at-sea story behind Adrift. Then, discover the tale of Tom and Eileen Lonergan, left for dead in shark-infested waters off the coast of Australia.