The True Story Of Nathan Hale, The Revolutionary War Hero Who Became A Martyr

On September 22, 1776, a 21-year-old spy for George Washington's Continental Army named Nathan Hale was hanged by the British. His untimely death inspired Washington to establish an espionage ring that ultimately helped America win the war.

During the American Revolution, Nathan Hale became famous not for his stunning heroism in a raging battle, but for the last words he reportedly uttered before his relatively quiet death. At the age of 21, Hale risked his life behind enemy lines as one of General George Washington’s first spies. 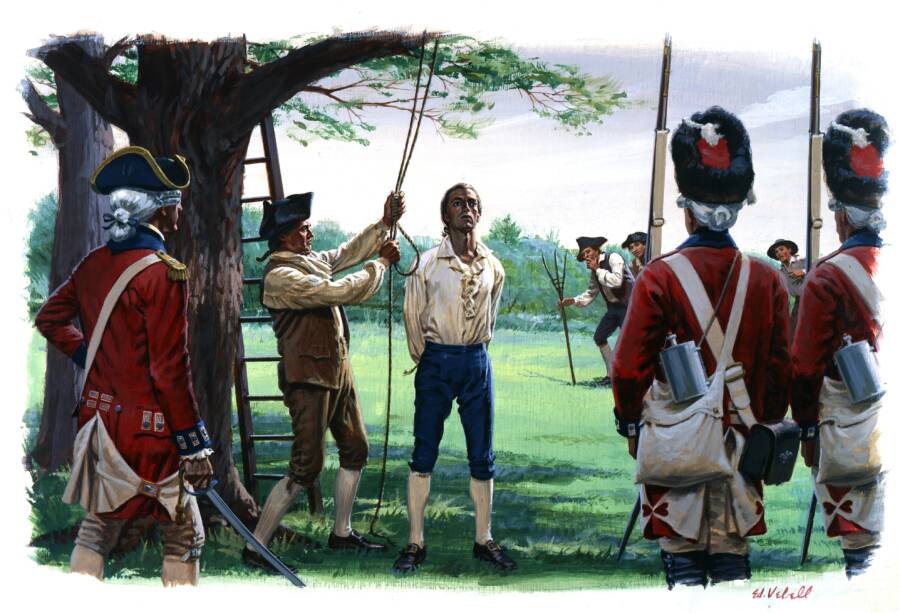 Ed Vebell/Getty ImagesNathan Hale spoke his last words on the morning of September 22, 1776.

He volunteered to disguise himself and travel into British-controlled territory to gather knowledge that would hopefully prevent the Redcoats from taking Manhattan. Unfortunately, the British Army invaded the island before Hale had a chance to pass on any worthwhile information — and he was found out while trying to return to General Washington.

After the British captured him, Hale spoke what are widely believed to be his now-famous last words: “I only regret that I have but one life to give for my country.”

But who was Nathan Hale? And how did his death in 1776 shape the American Revolution?

Born on June 6, 1755, Nathan Hale grew up in rural Connecticut. He came from a well-known family of Puritans who expected great things from young Nathan.

When he was 14 years old, Hale set off to Yale to earn a college degree. There, he impressed his instructors with his strong literature and debate skills. According to Biography, Hale graduated with honors at the age of 18 and became a teacher.

But it wasn’t long before the American Revolution upended Nathan Hale’s quiet life. When war broke out, the young man joined the Connecticut Militia. Then, in 1776, he became a captain in George Washington’s Continental Army and relocated to New York.

The British seemed unstoppable in the early months of the war. Soon, they’d seized Long Island and threatened to take Manhattan. General Washington quickly realized that he needed better intelligence on the British Army’s plans.

Washington reached out to his most reliable men. He needed a volunteer willing to go behind enemy lines. If captured, the spy would face certain death.

Hale agreed to go on a secret mission that would change his life — and the course of the war.

In order to avoid detection during his mission, Nathan Hale disguised himself as a Dutch schoolteacher. He set off for Norwalk, Connecticut on Sept. 12, 1776, where he caught a boat across Long Island Sound. The journey took him behind enemy lines to Huntington, Long Island.

Hale spent several days in Huntington, where he pretended to look for teaching jobs. While Hale was questioning locals about British troop movements, the British Army invaded Manhattan. Washington retreated, leaving the British in control of New York City.

Now in possession of America’s second-largest city (after Philadelphia), the British scoured New York and Long Island for Patriots. 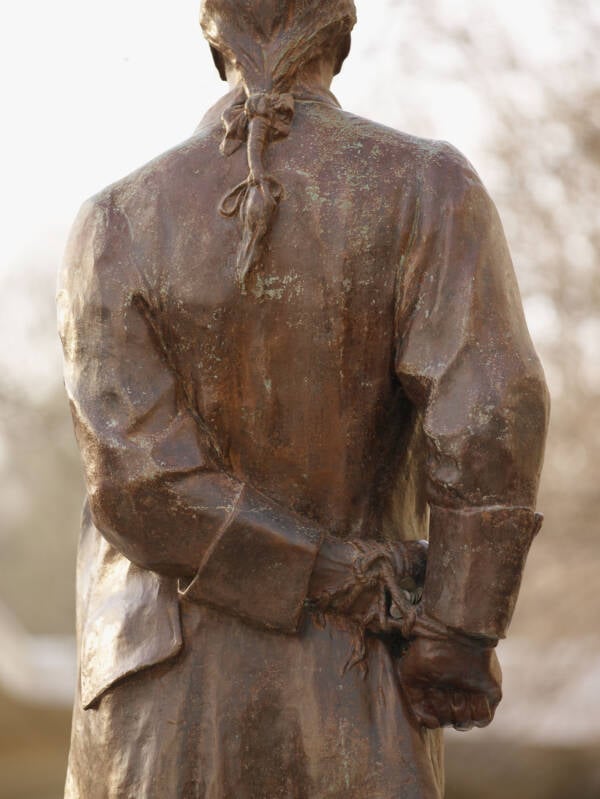 The Central Intelligence AgencyA statue at the CIA headquarters commemorates Nathan Hale as the first American to die while spying for his country.

Hale, trapped behind enemy lines, tried to make his way back to territory controlled by Washington. From that point, there are several varying stories about his capture.

Some say his Loyalist cousin Samuel Hale recognized him and turned him in. Other sources state that he was captured while sailing back across the Long Island Sound.

But according to the Library of Congress, a Loyalist named Consider Tiffany, who owned a shop in Connecticut, wrote of Hale’s capture in his record of the war. Tiffany claimed that British Major Robert Rogers “detected several American officers, that were sent to Long Island as spies, especially Captain Hale, who was improved in disguise.”

According to Tiffany, Rogers tracked Hale because he suspected him of spying. Rogers then disguised himself, pretending to be another Patriot behind enemy lines, and visited Hale at his quarters. Hale, thinking he could trust Rogers, confided in the British officer and toasted to the health of the Continental Congress. Rogers then invited Hale to dine with him the following day.

When Hale arrived at Rogers’ quarters, British soldiers surrounded the house and seized him.

The British captured the American spy on Sept. 21, 1776. Hale might have escaped his fate. In fact, he denied his name and rank, claiming he was no spy. But several New Yorkers recognized Hale and confirmed his identity to the British.

That very night, Howe ordered the spy’s execution to be scheduled for the following morning.

The Tragic Execution Of Nathan Hale

On the morning of Sept. 22, 1776, the British carried out the execution order. Redcoats led Nathan Hale to the gallows. The captain remained calm.

According to HISTORY, when the British placed a noose around his neck, Hale gave a “sensible and spirited speech.” He spoke of the sense of duty he felt.

As his final words, Hale declared, “I only regret that I have but one life to give for my country.” Then, the British hanged him. 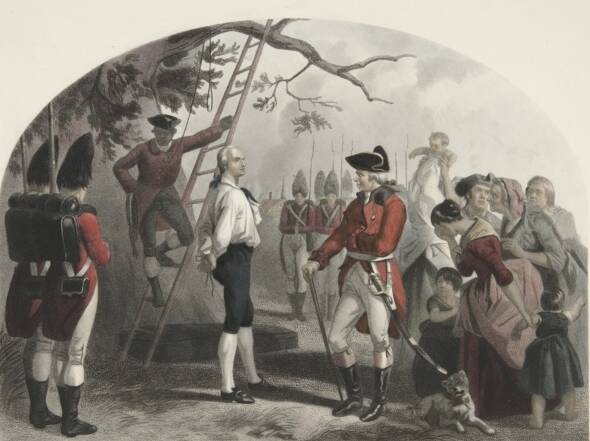 Alexander Hay Ritchie/Yale University Art GalleryNathan Hale became a hero for his bravery in the face of death.

But did the spy truly speak those words before he died? Accounts of Hale’s execution declare that the Patriot’s speech was impressive, but the exact words he allegedly spoke are not written down in any records.

If Hale did utter the phrase, he was likely inspired by the 1713 play Cato, which included the line, “What a pity it is / That we can die but once to serve our country.” Hale, a Yale-educated literature aficionado, likely knew the quote well.

The body of the American spy was left hanging as a warning to others for several days. Later, someone cut Hale down and buried him in an unmarked grave.

Nathan Hale died because his mission was likely doomed from the start. The captain received no spy training. His assignment was widely known among the Continental troops, with no concern for a British spy in their midst. And Hale carried none of the tools of spycraft.

He did not have a cipher to send messages back to the Continental Army. He did not have secret ink. In sum, Hale was an amateur — but so was Washington.

Operating behind enemy lines was dangerous. So Washington turned to Benjamin Tallmadge as his new director of military intelligence. Tallmadge created a spy ring centered in New York City, which was still occupied by the British at the time. 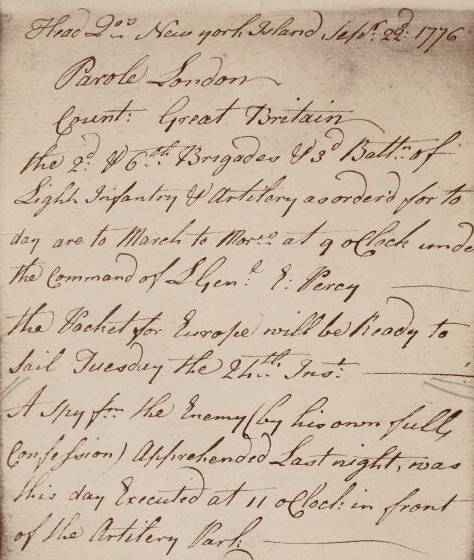 The underground spy network became known as the Culper Ring. According to HISTORY, spies posed as Loyalists and used signals and couriers to pass information to Washington’s Continental Army.

One female spy, codenamed Agent 355, even used her laundry to signal other spies. British soldiers never suspected that a clothesline spilled their secrets.

Washington relied on his spy ring and their ciphers to make decisions that would eventually win the war and set the stage for the creation of the United States of America. While Nathan Hale gave his life for the new nation, his legacy would help Americans finally gain their freedom from Britain.