A Startling Glimpse Into The US–Native American Assimilation Policy

The US-Indian Assimilation Policy was a final attempt by "Americans" to lay indigenous culture to rest -- and it had disastrous effects.

What happens when years of working to eradicate a group of people is unsuccessful? You assimilate them forcibly, which is what happened to Native Americans between 1790 and 1920.

The United States government’s Native American assimilation policies attempted to “Americanize” indigenous tribes through control of their schooling, religion, and customs, with a focus on immersion in Euro-American tradition. These policies caused cultural distress and also violated the Constitution. 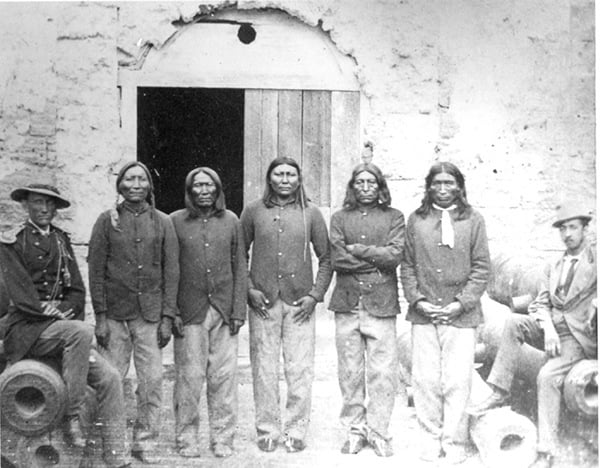 The nation’s first president, George Washington, officially promoted civilization policies. He promulgated a six-step system for assimilation, which included impartial justice towards the Native Americans, regulation of their land, promotion of commerce and punishment for those who violated their rights. Sale of native land had to be approved by the United States under the Indian Intercourse Act, and Native Americans were only occupants of the land, not owners. 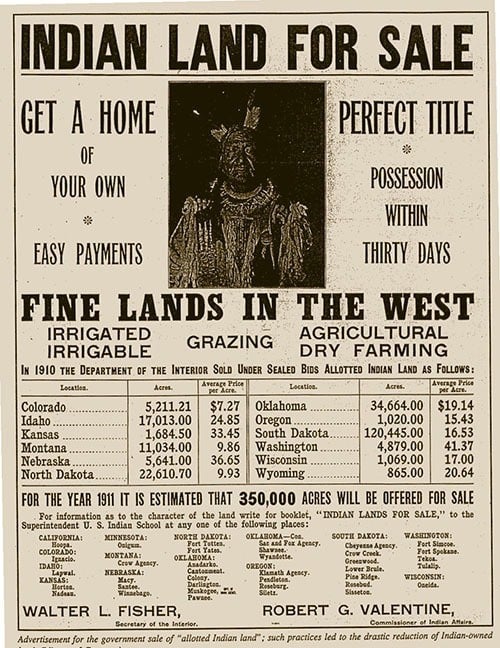 The Bureau of Indian Affairs (BIA) was created in 1824 within the War Department. The bureau, still in existence today, was tasked with management of Indian lands, establishing relations with the Indians and providing social services. 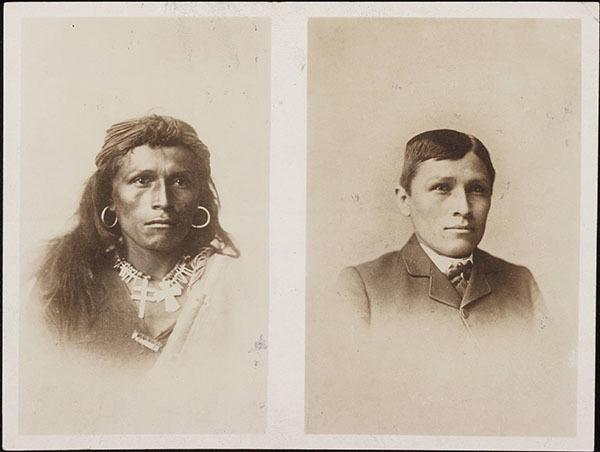 In 1830, Congress passed the Indian Removal Act, which supported the removal of Native American people living east of the Mississippi River to lands west of the river. This act did not force them to leave, but it did give the president the right to negotiate land exchange treaties with tribes in the United States.

One of the worst deals was the Treaty of Echota, signed by only a handful of Cherokees, but not any tribal elders, that ceded Cherokee native lands to the government. Georgia would later take action against the tribe for failure to follow through with the treaty and forcibly remove them from their land, leading to the Trail of Tears.

The Cherokee, along with other tribes like the Seminoles, Chickasaws, Choctaws, and Muscogees, were relocated to unfamiliar and infertile territory with little knowledge of how to survive. 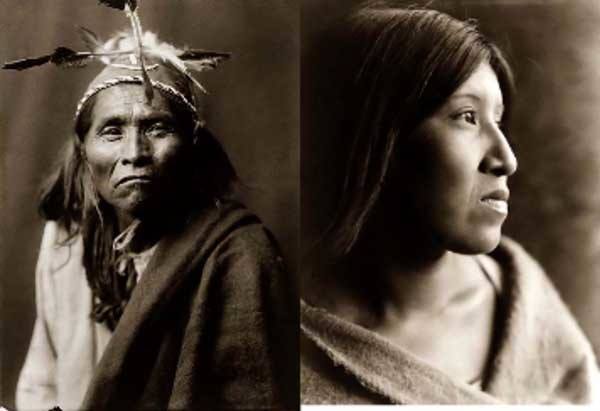 When Ulysses S. Grant took the office of president in 1868, he admonished the BIA’s ineffectiveness at establishing US-Indian relations and opted for a complete overhaul of the organization. Instead, Grant put in place Christian missionaries to supervise it. 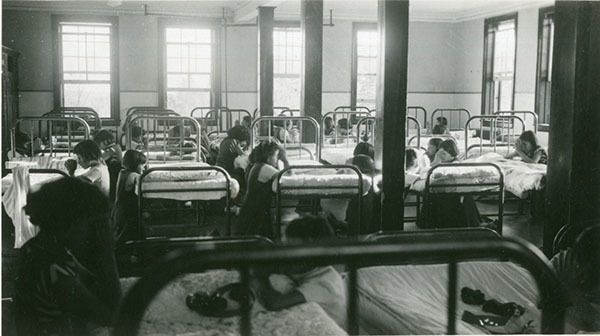 These individuals worked with the Secretary of the Interior to monitor congressional appropriations and make sure that the indigenous would be relocated to reservations and away from immigrants, converted to Christianity, assume the duties and responsibilities of citizenship and receive high-quality supplies for their reservations. However, the peace policy did not fully apply to tribes that supported the Confederacy during the Civil War. 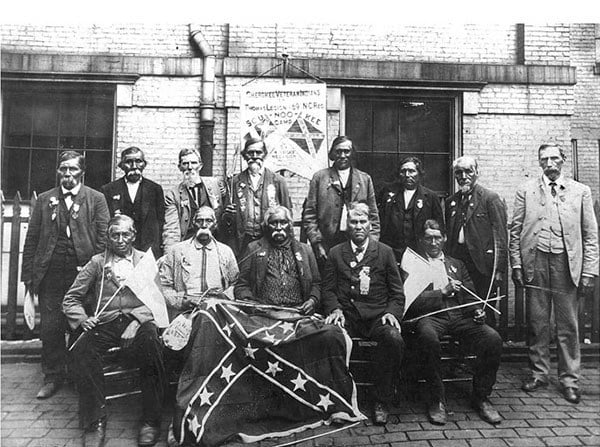 Grant sought to abandon the treaty mentality that had fostered war and infighting among native peoples and America. The majority of Protestant missionaries tried to convert and educate Native Americans with the hope that kindness and justice would prevail over a tumultuous history.

That wouldn’t happen and very little progress was made in US-Indian relations. Congress would not provide funds to assist the process, pastors’ families couldn’t tolerate the isolation out west and corrupt churchmen stole from natives. Grant’s peace policy was a disaster. 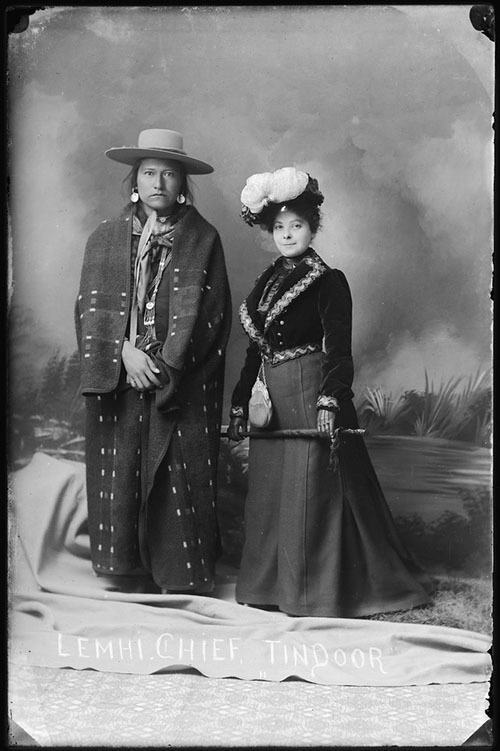 In 1876, the Great Sioux War broke out. The Lakota Sioux and Northern Cheyenne led a series of attacks against the United States as settlers encroached on the gold-rich Black Hills, which were protected Indian land, and which the Lakota consider to be sacred. The U.S. government tried to convince the Lakota to relocate so miners could use the area, but they refused.

One of the most memorable battles of the Great Sioux War was the defeat of the 7th U.S. Cavalry at the Battle of Little Bighorn, also known as Custer’s Last Stand. This battle occurred June 25 – 26, 1876, in Montana territory. Custer and all of his men perished. 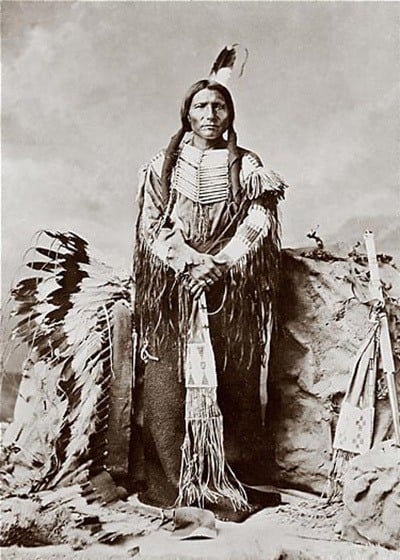 Following the fight, the ‘Sell or Starve” rider was added to the Indian Appropriations Act, which ceded the Black Hills to the United States and cut off all rations to the Sioux until hostilities ceased. 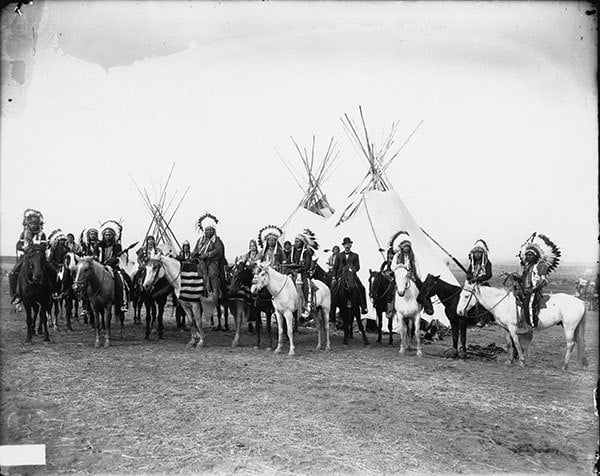 The Code of Indian Offenses and its court were created in 1883 as an attempt to squash Indian customs that were seen as a “great hindrance” to assimilation, however, the Five Civilized Tribes, Cherokee, Choctaw, Creek, Chickasaw, and Seminole, were exempt. The code was an outright attack on Native American identity, outlawing participation in traditional dances, funeral practices, use of medicine men and polygamy. The banning of traditional celebrations would lead to the Ghost Dance of 1890. 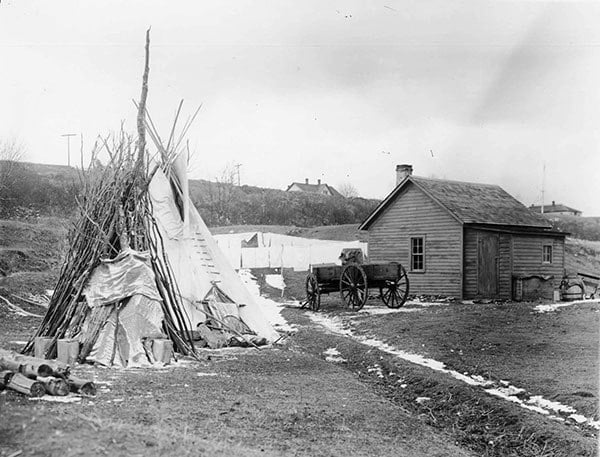 A prophet name Wovoka came to the Lakota with a vision that Jesus had returned to earth in the form of an Indian. He would rise up the native peoples, repopulate the over-hunted buffalo herds, remove the white man from the land, and the ghosts of native ancestors would return. To honor his vision, the Ghost Dance was performed, but settlers were worried and assumed that they were preparing for an attack. One of these dances would take place where Chief Sitting Bull lived. 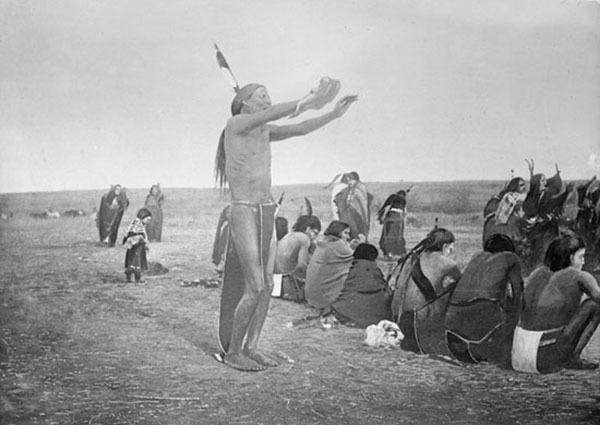 In December of 1890, in hopes of quelling the rising “Messiah craze,” police arrived at Chief Sitting Bull’s house to arrest him, and a crowd gathered to protest his arrest. The police fired shots, killing Sitting Bull and eight of his supporters. Six policemen also died. This led to the Wounded Knee Massacre in which the 7th U.S. Cavalry killed 150 Lakota men, women and children. Twenty-five soldiers also perished. 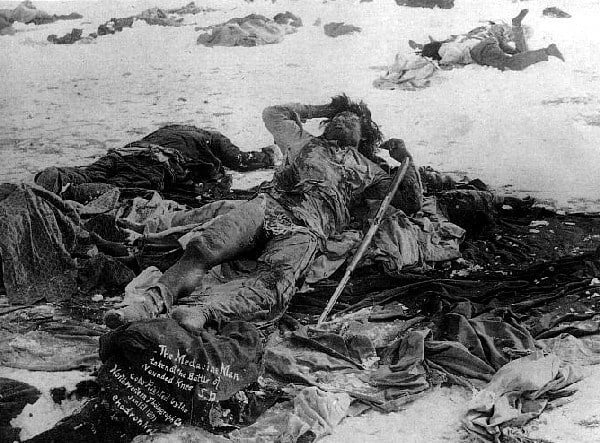 Indian boarding schools were built in the late 19th century to encourage the process of assimilation. Richard Henry Pratt built the Carlisle Indian Industrial School in 1979 in Carlisle, Pennsylvania, because he believed that education would help native peoples to assimilate. The Carlisle school offered basic education along with vocational training for males and domestic studies for females. 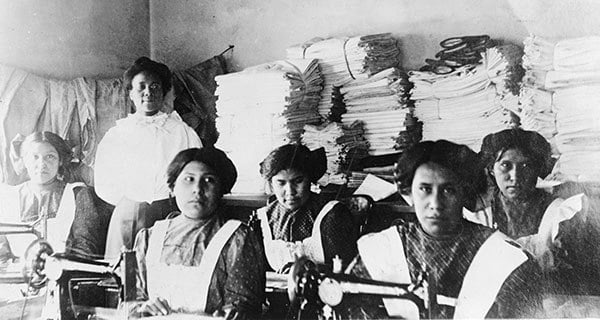 Children sent to the boarding schools were forced to cut their hair, wear Euro-American clothing and change their names to English ones.. While freedom of religion was protected by the Constitution, it did not apply to children in Native American boarding schools. 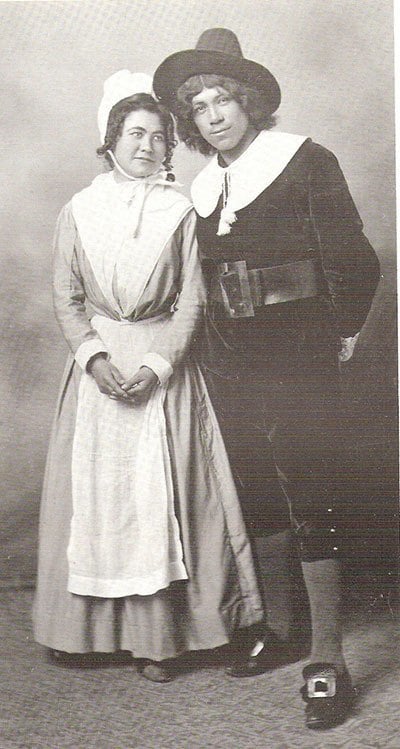 Failure to abide by the rules came with stiff punishment and sometimes, abuse. Inadequate sanitation beleaguered many of the schools, which often saw infectious outbreaks and illnesses.

Many boarding schools had closed by 1923 and native children were attending public schools, operated by their state governments. 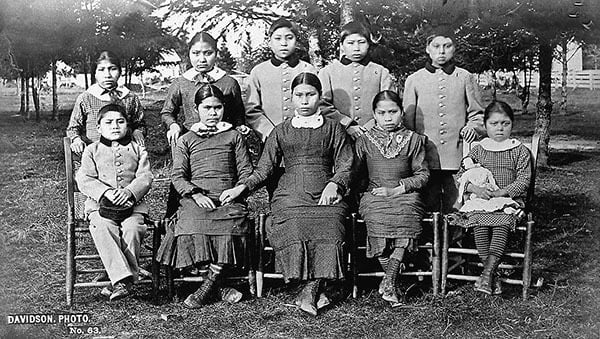 In 1924, President Calvin Coolidge passed the Indian Citizenship Act, which granted full U.S. citizenship to American’s indigenous populations, however, some Indians did not have full suffrage until 1948. Under the Indian Termination policies of the 1940s to 1960s, educational funding and land rights were pulled from various tribes in an effort to have them join traditional society. States were not prepared to meet their needs and many natives suffered. 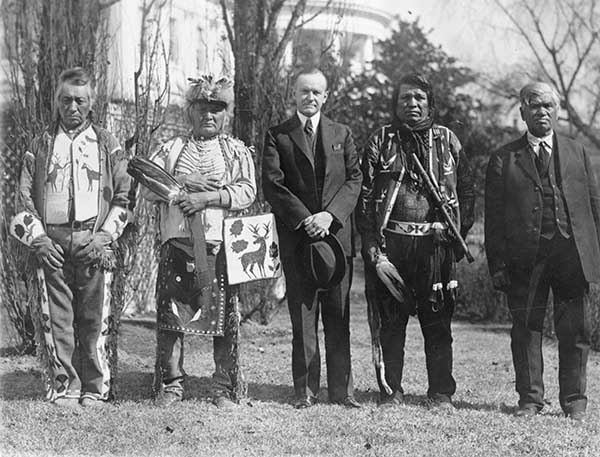 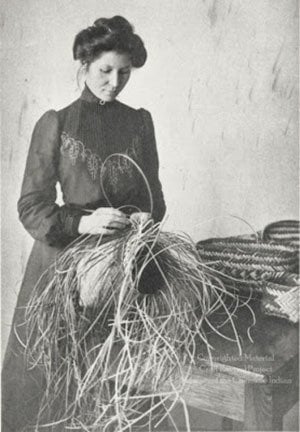 Still, poverty continues to be a problem for Native Americans, especially on reservations, and can be traced back to Native American assimilation policies.

With the focus on civilizing tribes, very little was done to assimilate Native Americans in a more meaningful way—namely through economic integration. While Native Americans now have freedom of religion, broken families and the cancellation of educational opportunities further created a situation for systemic poverty. 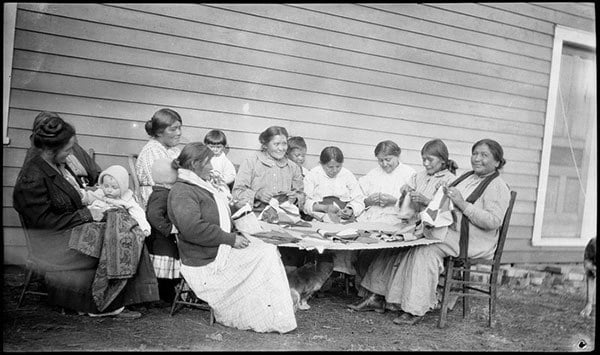 However, the greatest issue continues to be property rights and control.

Reservations in the proximity of large cities are sometimes used as landfills and are targeted as nuclear testing locations by the U.S. government because of their remoteness. The Nevada Test Site was constructed on Shoshone lands and was the site of nuclear testing from 1951 to 1991. Furthermore, tribes often own land communally, so businesses have a difficult time operating on native lands, as there is disagreement about U.S. government or tribal law purvue.

All of these issues contribute to cultural distress, which exacerbates poverty. It is only through serious research, unified commitment, and dedicated economic planning that the government and Native Americans will begin to solve some of these problems and build peace across a culturally territorial divide.