The Cherokee’s Horned Serpent, The Uktena 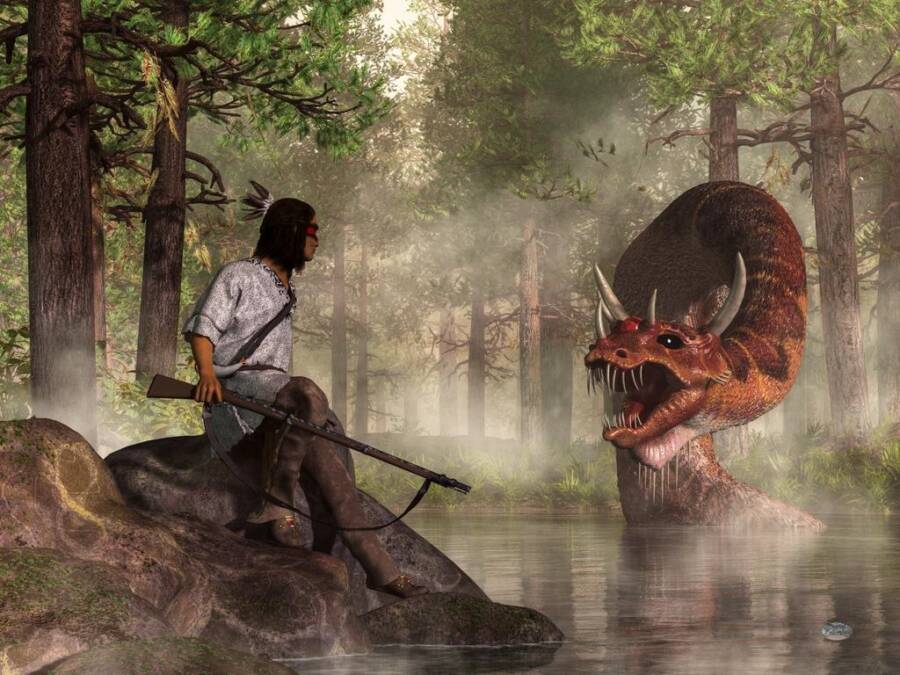 Many cultures worldwide tell tales of giant serpents or dragon-like creatures secretly lurking deep in the wild. Various serpent beasts can be found in Native American folklore; among them is the myth of Uktena.

The legend of the Uktena originated among the Cherokee nation of the Southeastern U.S. It is essentially a dragon-like horned serpent with wings. But some depictions are far more unnerving.

The nineteenth-century anthropologist James Mooney observed the Cherokee tribe in Western North Carolina and described the Uktena in his 1992 book History, Myths, and Sacred Formulas of the Cherokees, writing:

“Those who know say that the Uktena is a great snake, as large around as a tree trunk, with horns on its head, and a bright, blazing crest like a diamond upon its forehead, and scales glittering like sparks of fire…The blazing diamond is called Ulun’suti, ‘transparent,’ and he who can win it may become the greatest wonder worker of the tribe. Still, it is worth a man’s life to attempt it, for whoever is seen by the Uktena is so dazed by the bright light that he runs toward the snake instead of trying to escape.”

According to Mooney’s research, the only warrior ever believed to have successfully retrieved the blazing Uktena diamond and live to tell the tale was Âgăn-uni′tsĭ. 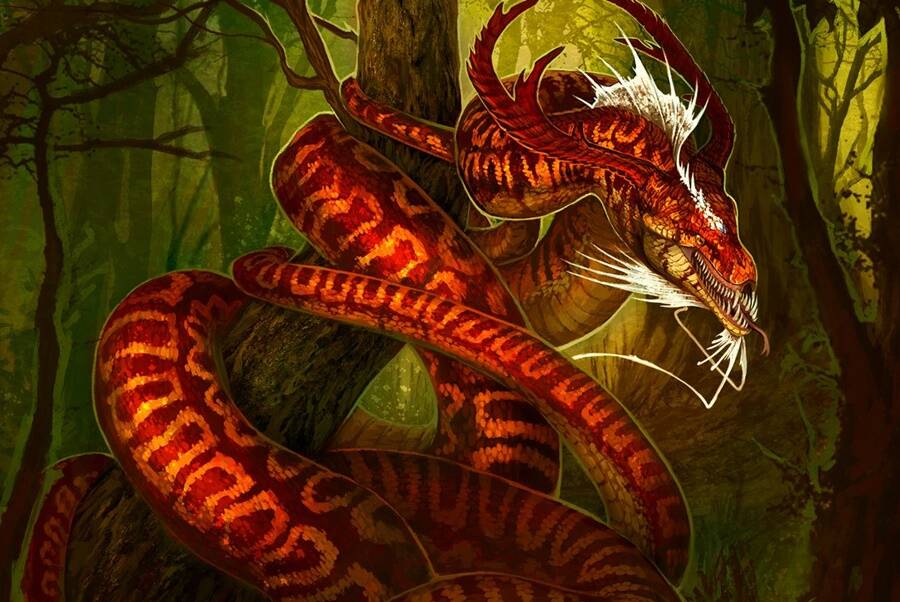 tatiilange/Deviant ArtUktena are said to possess a blazing diamond on their foreheads called Ulun’suti. Those who can retrieve it are considered great protectors.

The diamond he had obtained was allegedly still in possession of the East Cherokees during Mooney’s visit to the tribe. However, as a white man and outsider, the researcher was not allowed to see it.

According to the Cherokee legends of this Native American monster, the first Uktena was made long ago, when the sun sent a sickness down to kill the people on earth. A man was changed into a horned snake and sent to kill the sun. He failed, but the Rattlesnake tried next and succeeded.

The Uktena was so jealous and angry about his failure that all the people were afraid of him, so they took him away from the tribe and hid him.

In other tales, these horned serpents are born out of envy and anger and represent the darkness of the Underworld. Legend has it that the Uktena lives in isolated, dark places like gorges, caves, and lonely passes in the high mountains. Generations of Cherokee passed on the knowledge of possible Uktena dwellings so members of the tribe could avoid these dangerous spots.

Several stories tell of this monster of Native American lore. Among the most famous stories about the Uktena is the battle between this fierce serpent beast and the Tlanuwa, giant mythological birds of prey that possess impenetrable metal feathers.

As the legend goes, a pair of Tlanuwa had been terrorizing a local village by swooping down and grabbing the villagers’ dogs and children to feed to their young. The tribe’s medicine man devised a way to reach the Tlanuwa’s eggs and throw them out to the river, where the Uktena immediately devoured them.

Enraged that their young had been eaten, the mythical birds killed the giant serpent.

Other Native American tribes tell of enormous dragon-like serpents, including the myth of the Quetzalcoatl, the feathered serpent mentioned in the ancient lores of Indigenous cultures in Central America, and the Ogopogo, which is a serpent water spirit that is found in the folklore of Canada’s Westbank First Nation.