Tecumseh: The Native American Leader Who Tried To Form An Indigenous Alliance 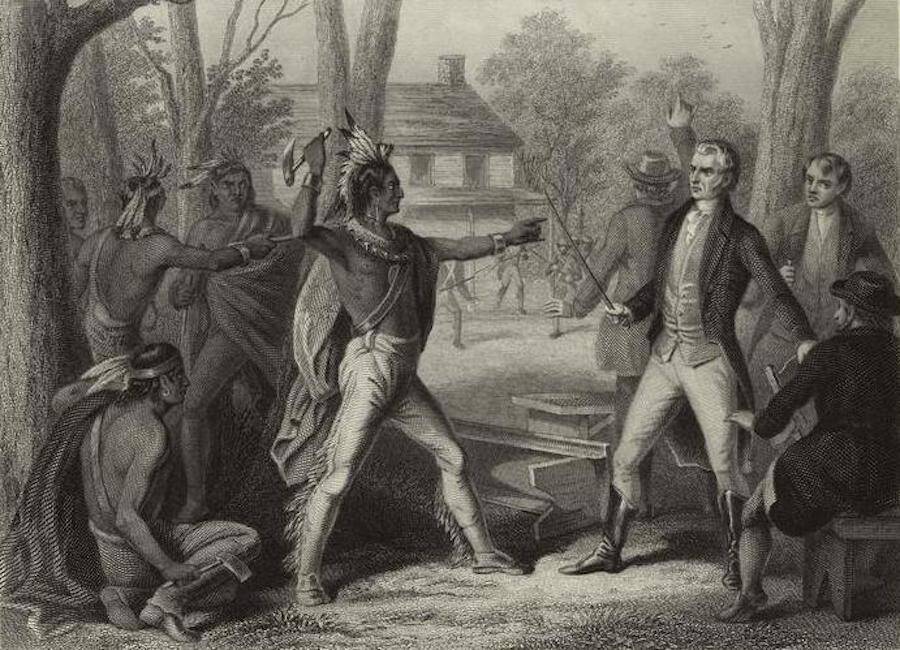 Wikimedia CommonsAn illustration of Tecumseh attacking William Henry Harrison, then the governor of Indiana Territory, in 1810.

A warrior chief of the Shawnee tribe, Tecumseh was one of the most fascinating Native American leaders in history. He firmly believed that all Native American tribes needed to settle their differences in order to successfully fight the U.S. Army. In fact, he even organized a Native American alliance in hopes of establishing an autonomous nation.

Tecumseh (a name that means “shooting star”) was born in 1768 in the western Ohio Valley. His father was a chief who died in the Battle of Point Pleasant, after which his mother moved to Missouri. Tecumseh was left behind to be raised by his older sister Tecumapease in the ways of Shawnee culture — and to be forged into a warrior by his older brother Cheeseekau.

From an early age, Tecumseh grew to despise the encroaching white settlers and how they treated the Shawnee people. However, he was equally revolted by the violent tactics that some Native Americans used to fight the colonists. While Tecumseh would spend much of his life in battles against settlers, he hoped that uniting multiple Native American tribes against the invaders would someday make all of these battles unnecessary.

Young Tecumseh’s early battle experience came from raids on white settlers in the 1780s. But after he joined up with Cheeseekau and other Shawnee warriors in Tennessee, Tecumseh saw his brother killed while in battle. Shortly thereafter, Tecumseh was made the leader of the Shawnee band. Returning to Ohio, he met up with Chief Bluejacket to battle the U.S. Army.

Incredibly, Tecumseh and his men triumphed against General Arthur St. Clair and his troops in the Battle of Wabash in 1791. However, the Battle of Fallen Timbers saw General Anthony Wayne emerge victoriously. This led some Native American warriors to sign the Treaty of Greenville, which forfeited a large amount of their land in the Northwest Territory.

But Tecumseh refused. Instead, he opted to spend his time recruiting people across tribes into his pan-Native American alliance. By 1805, he had grown into an esteemed leader, while his younger brother experienced a vision that saw him change his name from Tenskwatawa to “the Prophet.”

As Tecumseh’s alliance grew, his followers settled in modern-day Indiana in a community called Prophetstown. Tragically, in 1811, Indiana Territory Governor William Henry Harrison launched the Battle of Tippecanoe and burned the settlement to the ground while Tecumseh was out recruiting new followers.

When Tecumseh returned, he realized that his multi-tribe alliance had been almost completely decimated. Still unwilling to give up the fight, Tecumseh then convinced any remaining followers to join him in fighting for the British against U.S. troops during the War of 1812. Although his allies got the chance to face Harrison’s army in Canada in 1813, the Brits were clearly outnumbered — and Tecumseh was killed at the Thames River.