Crazy Horse: The Oglala Lakota Warrior Immortalized On A Mountain 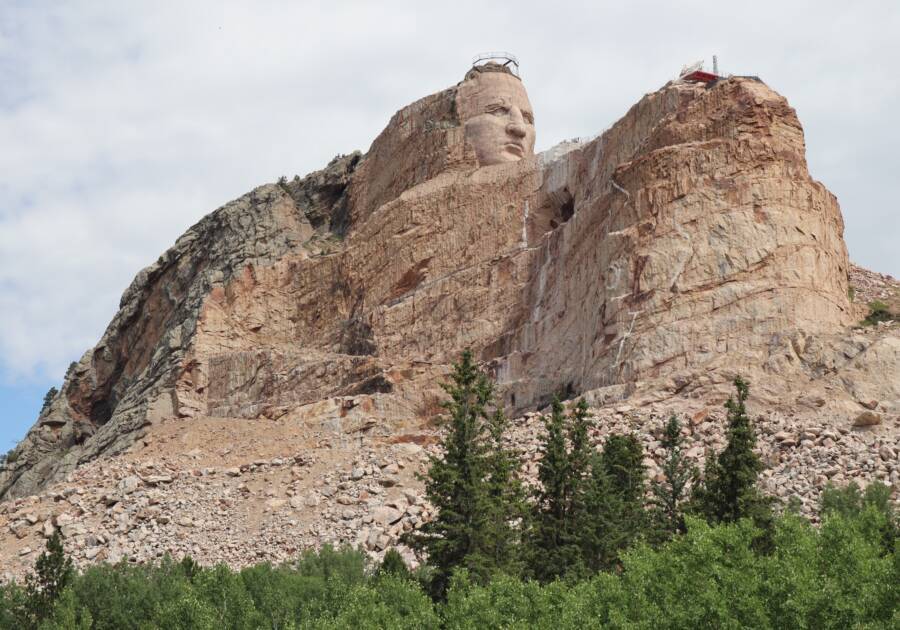 Wikimedia CommonsA monument to Crazy Horse in South Dakota’s Black Hills has been under construction for more than 70 years.

Custer County in South Dakota has always been hallowed ground. Its Black Hills were considered sacred by the Lakota tribe — and the gold beneath its soil was deemed valuable by the U.S. government.

It was here that George Armstrong Custer commanded U.S. soldiers to drive the Lakota people out — with Crazy Horse thwarting their attacks.

The son of a medicine man, Tasunke Witco (or “Crazy Horse”) was born in 1840 on Rapid Creek. Raised by the women of his Oglala Lakota family, he underwent an essential rite of passage in his youth called Hanbleceya (or “crying for a vision”) — and spent four days without food or water in the Black Hills hoping to receive guidance from the spirits.

Even when he was just a teenager, Crazy Horse showed skill in battle, riding out with a feather in his hair and a lightning bolt painted on his face. He believed that these preparations would protect him as the increasing encroachment of white settlers threatened to destroy his way of life.

The Oglala Lakota once inhabited land stretching from the Missouri River to the Big Horn Mountains. But with settlers eager for resources and U.S. military bases springing up in the west, tensions escalated in August 1854. Lieutenant John Grattan had taken some Sioux men prisoner and killed Chief Conquering Bear — which led to violent retribution.

It was a formative skirmish for young Crazy Horse and fostered a lifelong distrust of white settlers. As an adult, he led numerous assaults against U.S. soldiers like the Fetterman Massacre. Armed with bows and arrows, Crazy Horse and his Native American warriors overpowered Captain William J. Fetterman’s 80 soldiers in a colossal embarrassment for the military.

Still, settlers continued to encroach on the lands of the Great Plains. While Crazy Horse had signed the Fort Laramie Treaty of 1868, guaranteeing the Lakota important lands including the Black Hills region, he dreamt of restoring all territories of the Great Plains back to his people.

But before long, even Black Hills was no longer safe. When the U.S. government realized that there was gold in the area, they swiftly ordered all Indigenous residents who lived there onto reservations.

Crazy Horse not only refused to give up his land but also led 1,200 warriors against General George Crook’s troops in 1876. The troops retreated, only to return a week later with backup. Now known as the Battle of the Little Bighorn, the ensuing conflict saw George Armstrong Custer and hundreds of his men killed at the hands of Native American warriors.

After the humiliating defeat, the U.S. government only escalated its efforts to round up Native American leaders — including Crazy Horse. In an effort to protect the most vulnerable of his people, Crazy Horse agreed to a truce at Fort Robinson in 1877. But then, he was bayoneted to death after his translator allegedly misinterpreted his words during negotiations.