Since being discovered in 1926, the Nazca Lines have inspired countless theories about their origin. Are they extraterrestrial, a message from ancient civilizations, or something more sinister?

Some 250 miles south of Lima, Peru, not far from the shores of the Pacific Ocean, there is a great arid plane — the site of one of the world’s oldest mysteries.

Across 170 square miles of flat earth, the hard red soil is broken only by a series of strange furrows. They aren’t deep — usually breaking just six to twelve or so inches into the ground — and most aren’t especially wide. The majority span just a foot or so of dry ground.

But they are long. 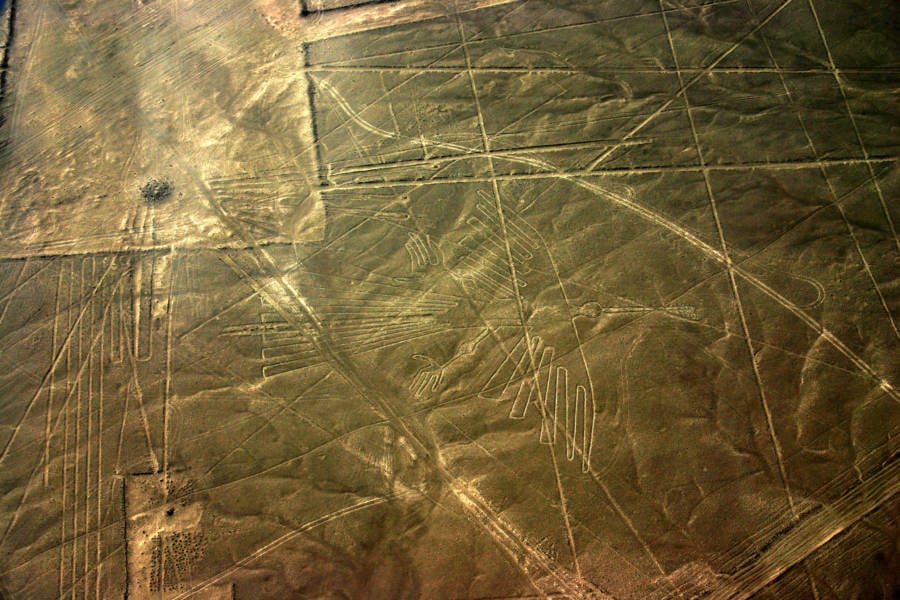 Paul Williams/FlickrThe Condor, one of the 70 plant and animal geoglyphs that make up Peru’s Nazca Lines.

Some trenches go on for as much as 30 miles, slicing great parallel lines across the desert. Others turn in on themselves, spiraling like the whorls of a giant’s fingerprint. And some seem to follow no discernible pattern at all.

The first travelers who stumbled upon them in the 1500s thought they were the remnants of roads — vast, complicated roads from a bygone civilization.

It wasn’t until 1927 that the truth was discovered. Peruvian archaeologist Toribio Mejía Xesspe was making his way up a series of nearby hills when he glanced down and saw the furrows in the valley below.

The desert grooves, he realized, weren’t the ruins of ancient roads at all. They were a set of massive images, symbols carved into the earth, so big that they were unrecognizable from ground level.

So began almost a century of investigation as archeologists and amateur enthusiasts alike tried to make sense of one of the world’s greatest mysteries: the Nazca Lines. 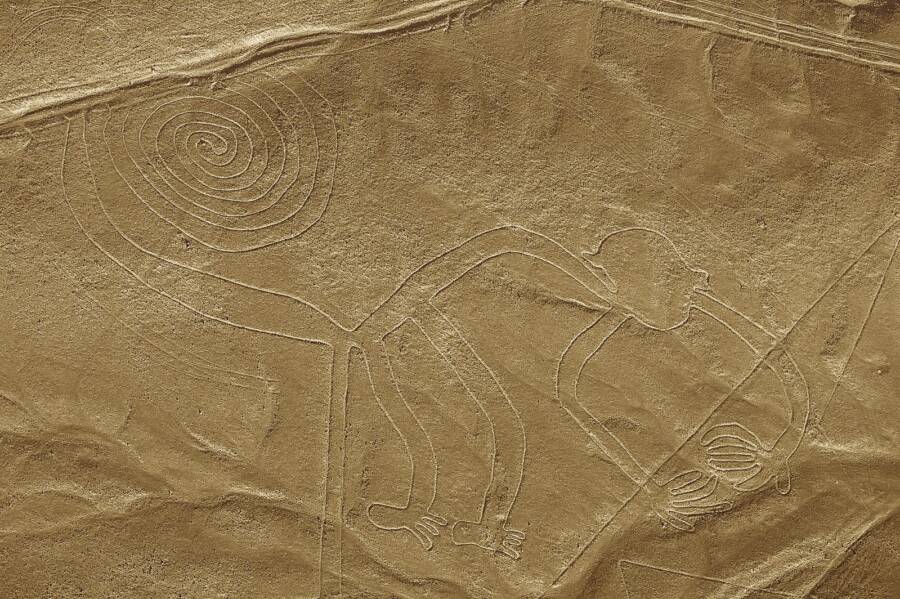 Given the astonishing size and complexity of the designs in Peru’s Rio Grande de Nasca river basin, it comes as no surprise that supernatural explanations of the symbols have been popular.

Proponents of paranormal theories claim that the Nazca, the indigenous people credited with creating the lines some two thousand years ago, couldn’t possibly have etched the designs in the earth without being able to fly. It’s only from directly overhead, they say, that some of the designs are truly visible.

Aliens are a popular choice for their helpers. Others say the Nazca built the lines themselves but with extraterrestrial instructions, perhaps to create landing strips and runways for alien spacecraft, or to attract aliens with images big enough to be visible from space.

As evidence, fans of the alien theory point to some of the more unusual Nazca biomorphs — the name for the etchings that depict forms found in nature, like humans, insects, birds, fish, trees, and flowers.

A popular example is the biomorph called “the astronaut,” a human figure with a bulbous head like a man in a spacesuit. 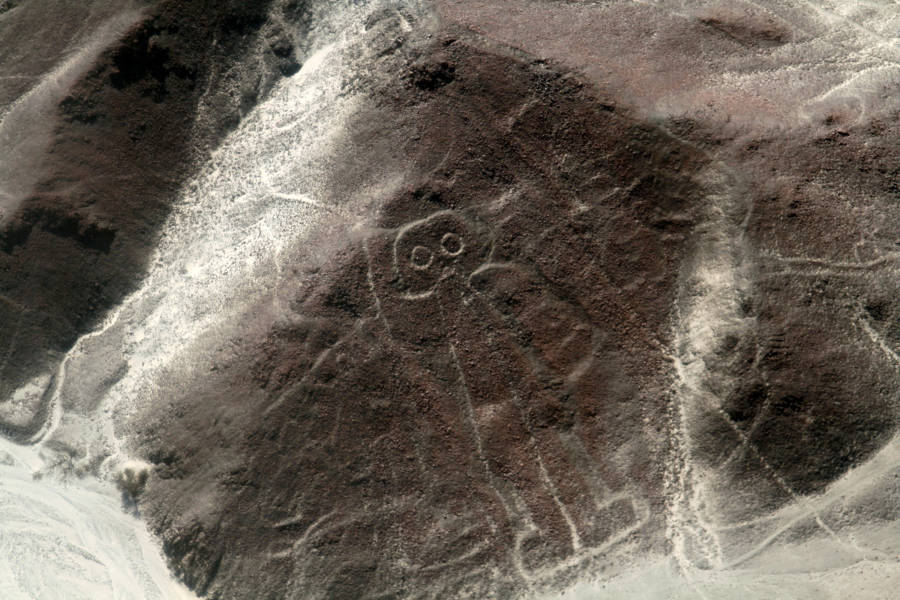 Swiss author Erich von Däniken was convinced some of the biomorphs depict aliens themselves, an idea he popularized in his 1968 book Chariots of the Gods.

The book catapulted Peru’s Nazca Lines to prominence among conspiracy theorists, and the discovery of Nazca bodies only fed the legend.

The Nazca, who inhabited the arid valleys of the Rio Grande de Nasca river basin from around 100 BCE to 800 CE, practiced mummification. As a result, archeologists have found a number of well-preserved bodies — sometimes in unusual conditions.

Most notable is a distinct and unnatural elongation of the skull in some of the corpses.

Then, too, there was the mysterious three-fingered mummy, which made a splash in June of 2017 as excited researchers announced their belief that this latest body might not be human at all.

The Truth About The Nazca Lines 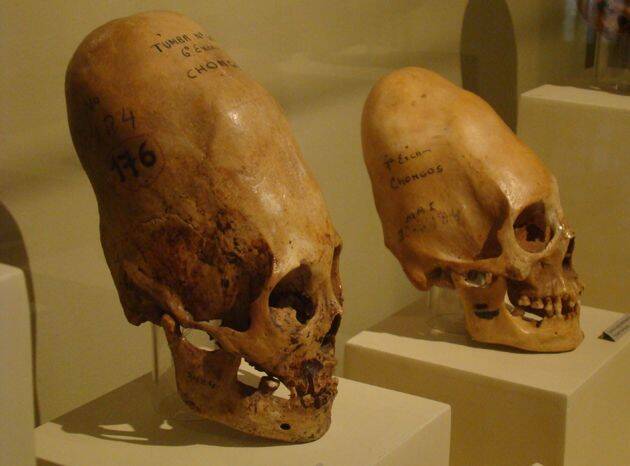 Wikimedia CommonsThe elongated skulls of the Paracas, an ancient civilization that slightly predated the Nazca in the Rio Grande de Nasca river basin.

So did aliens play a role in the creation of the Nazca Lines? Probably not.

Even if you’re inclined to believe in the existence of aliens who visit earth, there’s not a lot of reason to suspect they had a hand in this particular mystery.

That’s because when it comes to the “how” of the Nazca Lines in Peru, there’s not really anything left to solve.

Unlike the pyramids and Stonehenge, which both raise lingering questions about how the ancients who built them achieved such technologically difficult feats, the Nazca Lines can clearly be made with technology available before the Common Era. 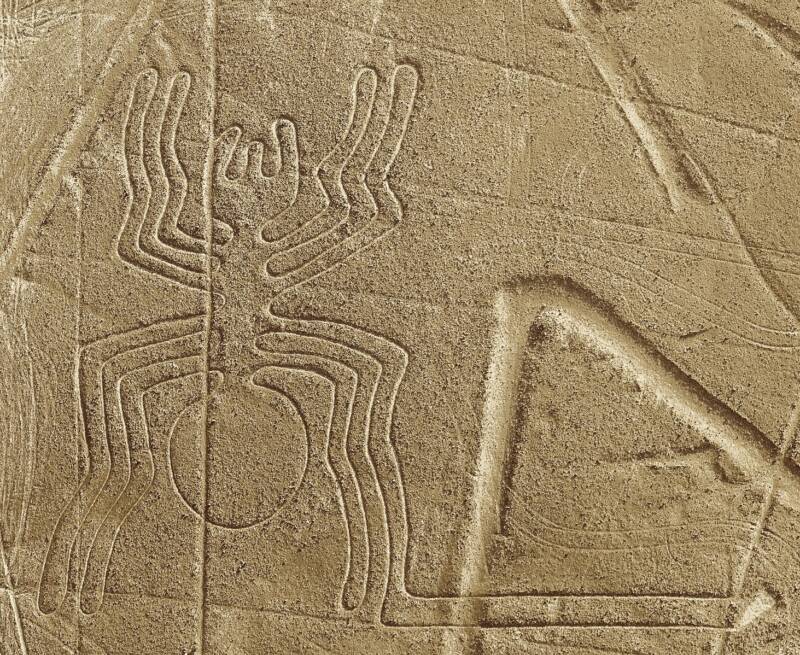 The Nazca simply raked back the top layer of rocky soil, which thousands of years of weathering had turned a deep brownish red, to reveal the lighter yellow sand underneath. The difference in coloration creates distinctive lines that are visible for miles.

To get the proportions of their designs right, the Nazca could have created small models, then used stakes (some of which have been found) and ropes to scale them up.

While the Nazca Lines look best from the window of an airplane, all of them are also perfectly visible from elevated land, like the plain’s surrounding foothills — including the one Peruvian archaeologist Xesspe was hiking up when he spotted the glyphs. The Nazca could have easily directed operations or checked much of their work from nearby hills.

Even the designs’ longevity is easily explained. The plain the Nazca inhabited is so arid that it is almost weatherless; few winds disturb its soil, and the region’s average precipitation tops out at 4 millimeters per year. As a result, furrows dug thousands of years ago have remained virtually untouched.

No alien intervention was needed, either during construction or after. 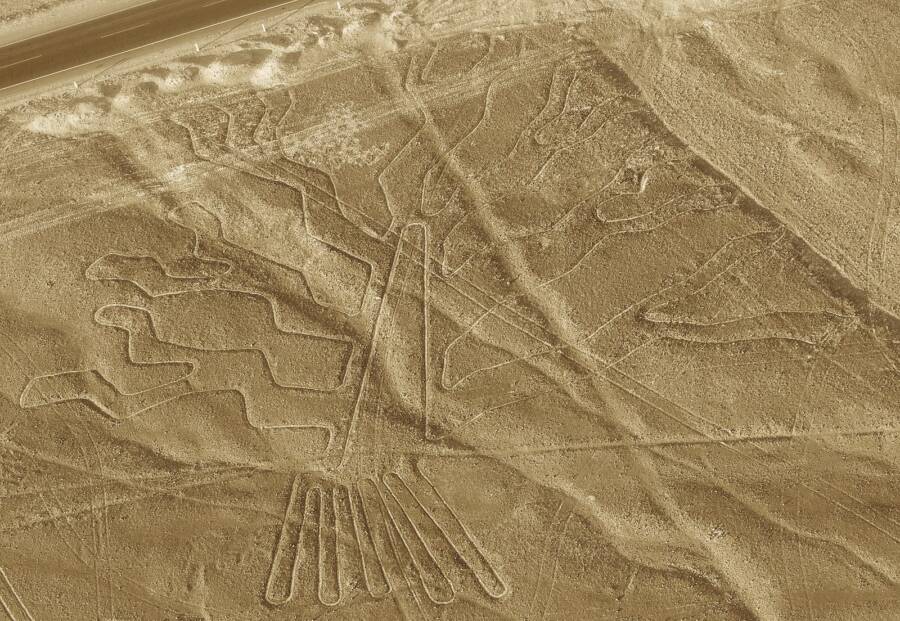 As for the “astronaut” biomorph, it’s also known by another name: the giant. It’s not hard to imagine that the Nazca stylized their images of people in the same way they deviated from reality with their animals — by enlarging some portions (like the head) and shrinking others.

But what about the bodies?

Archeologists have a pretty good fix on those too.

The three-fingered mummy is widely believed to be a hoax cobbled together by forgers from real mummified Nazca remains. 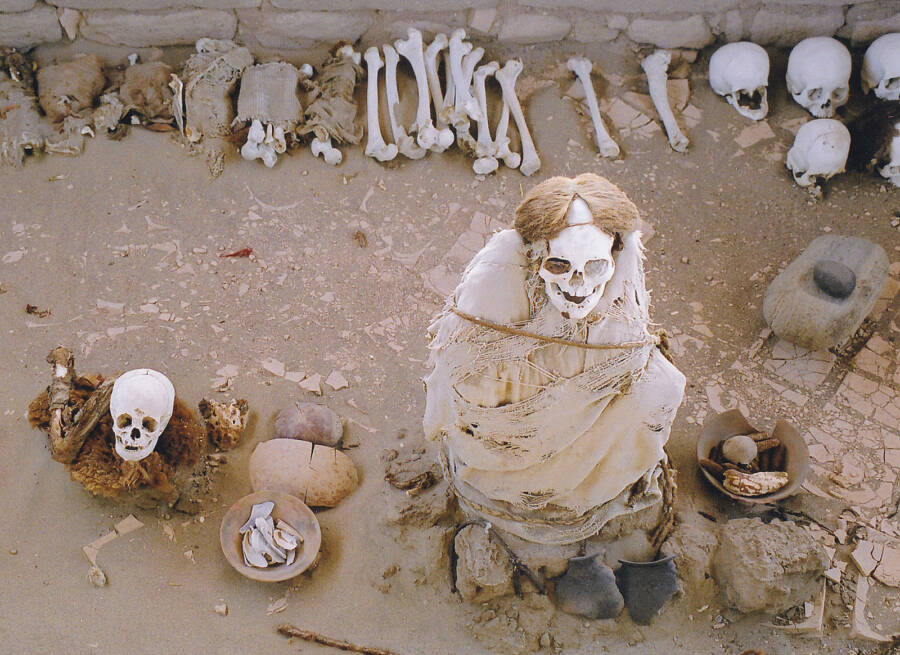 Peter van der Sluijs/Wikimedia CommonsA Nazca cemetery like the one thieves are suspected of raiding to create the three-fingered Nazca hoax mummy.

The elongated skulls of the Nazca mummies are absolutely real — but they, like the Nazca Lines themselves, are the work of human hands.

The Nazca performed what archeologists call artificial cranial deformation, a practice that involves binding the skulls of infants when they’re pliable to create an altered skull shape that lasts into adulthood.

It’s a practice found among ancient peoples around the world, thought to have been used as a kind of in-group marker to differentiate a tribe from outsiders, or perhaps as a signal of social status within a tribe. 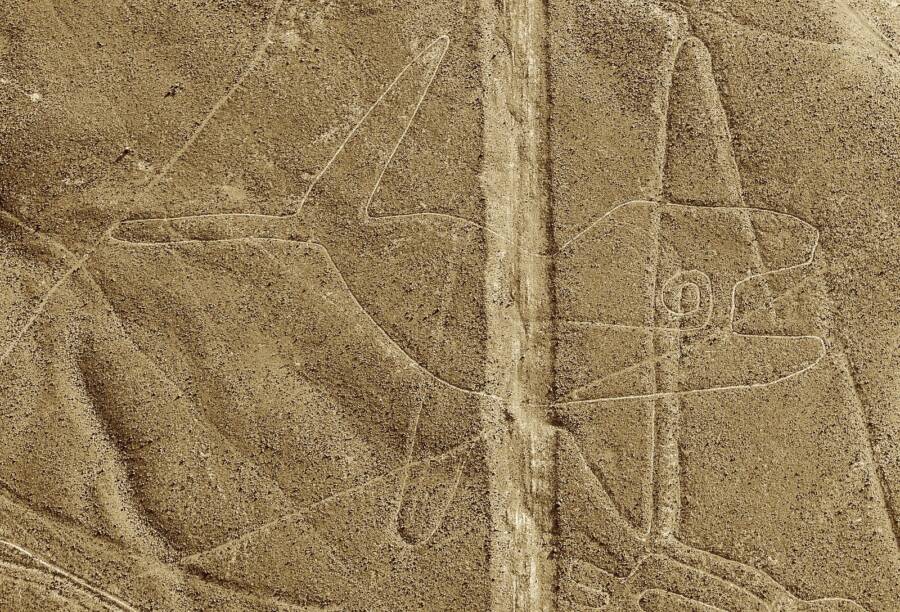 Though it’s clear how Peru’s Nazca Lines were made, one thing remains a mystery: why?

In the years following their discovery, archeologists favored astronomical explanations.

Paul Kosok and Maria Reiche, some of the earliest to study the Nazca Lines, hypothesized that the furrows had been made to indicate the places on the horizon where the sun and moon would rise and set on important holidays, like a kind of enormous calendar.

The geoglyphs were thought to represent earthly constellations like the ones in the night sky.

In recent years, however, scholars have begun to doubt astronomical interpretations of the marks, pointing to the fact that most of the lines aren’t easily tied to celestial happenings.

An aerial view of some of the new lines recently discovered with the help of drones.

National Geographic’s Johan Reinhard thinks it’s more likely the lines were markers of the sites of religious rituals, especially those centered around water.

In such a dry climate, water would have been a going concern for the Nazca — a preoccupation some archeologists see in the biomorphs the ancient people chose to carve into the earth. 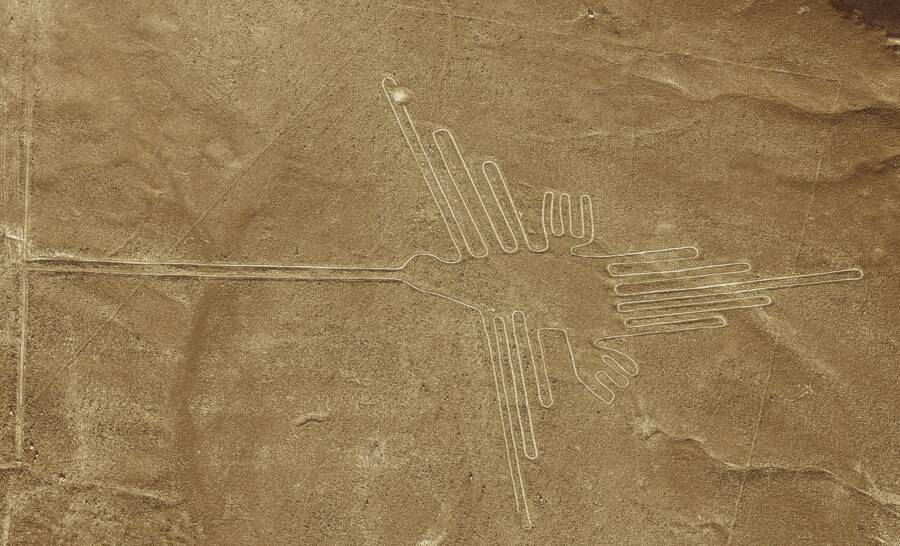 Spiders, in many Andean cultures, are associated with rain, and animals like monkeys and hummingbirds would have appeared in nearby jungles — where water was plentiful.

It’s almost impossible to know why the Nazca built the lines without more evidence. Researchers, however, are hopeful that with the advent of new technology, especially high-tech drones like the ones Peruvian archeologists used to discover 50 new lines in 2018, answers are just around the corner.

All it takes is a fresh perspective.

After learning about the mysterious Nazca Lines of Peru, read up on why some people think Ancient Sumerians were visited by aliens. Then, unlock the mysteries of the Georgia Guidestones, America’s Stonehenge.