Archaeologists Unearth Massive Cat Geoglyph From 2,000 Years Ago In Peru

Researchers believe it is the oldest geoglyph that has been found among the hundreds of giant carvings that make up the ancient Nazca Lines. 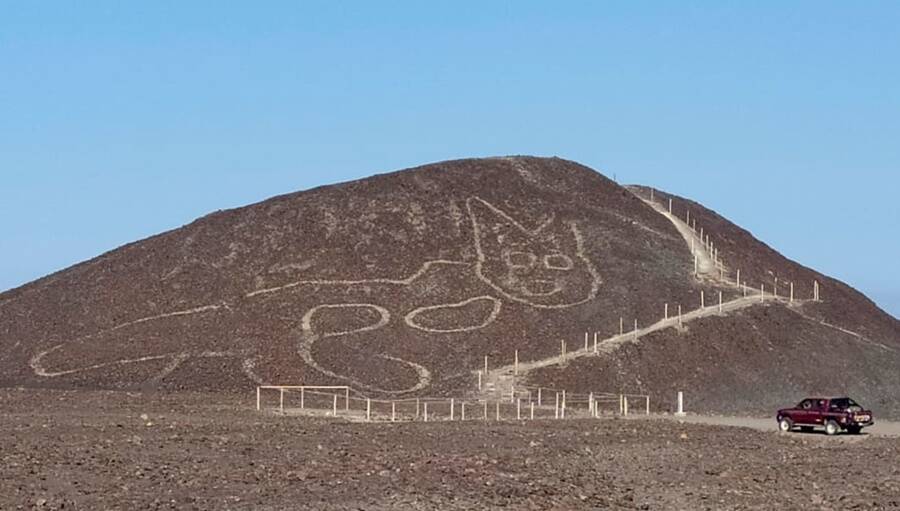 Jhony Islas/APA 2,000-year-old giant etching in the shape of a cat was found at the famous Nazca Lines site in Peru.

Aside from Machu Picchu, the ancient Nazca Lines are Peru’s largest tourist attraction. A collection of larger-than-life geoglyphs that were etched into the ground by Indigenous people thousands of years ago, the Nazca Lines have just gained a new attraction.

According to CNN, a massive etching of a feline was recently discovered during maintenance work at the Nazca Lines, an official UNESCO World Heritage Site.

The newly uncovered carving, which stretches over 121 feet long on a hillside plateau, is made-up of a pair of carved out eyes, pointy ears, and a large tail.

“Representations of this type of feline are frequently found in the iconography of ceramics and textiles in the Paracas society,” the country’s Ministry of Culture wrote in a statement, a reference to the ancient South American culture that once dominated the region.

Researchers excavated the geoglyph during the site’s closure amid the global COVID-19 pandemic. The newly found cat carving was created sometime between 200 B.C. to 100 B.C. during the late Paracas period in what is modern-day southern Peru. 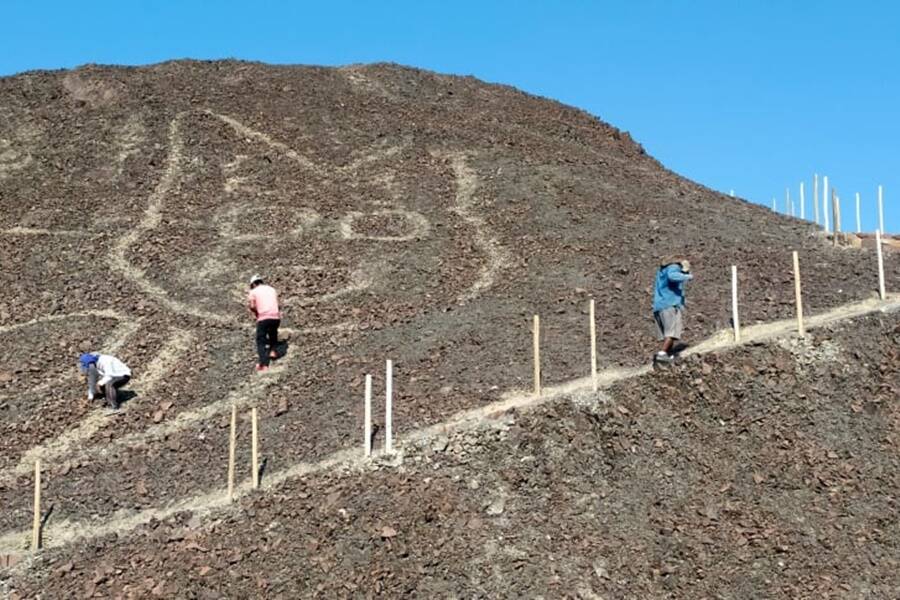 Jhony Islas/APThe massive geoglyph was unearthed during maintenance work at the Nazca Lines, which is a designated UNESCO World Heritage Site.

The cat carving is believed to be older than any of the prehistoric geoglyphs previously unearthed at the site. It is also the largest animal depiction unearthed there so far.

The Nazca Lines were created by ancient Peruvians, scraping the top layer of black rock and gravel from the ground to reveal a bed of rock that was much lighter in color.

This resulted in hundreds of giant carvings which, when observed from above, clearly form depictions of various animals, plants, birds, and intricate abstract designs.

The ancient geoglyphs of the Nazca Lines cover roughly 174 square miles of land and are believed to have been created between 100 BC to 700 AD.

They were finally brought to light thousands of years later during the 1920s when Peruvian archaeologist Toribio Mejia Xesspe uncovered the striking depictions carved into the rocky landscape of the region. As air travel became more prevalent in the 1930s, even more lines were discovered.

In recent years, scientists began to use new technology to uncover a trove of ancient etchings throughout the landscape. In 2019, a group of Japanese researchers successfully identified more than 140 new designs among the Nazca Lines using high-resolution 3D data to uncover etchings that were still hidden.

The massive cat carving is the latest finding at the mysterious Nazca Lines site. It’s still unclear what exactly these giant etchings were meant to be used for though some experts suspect they served as travel markers.

Further studies on the site will hopefully help archaeologists better understand these enigmatic geoglyphs, and uncover their true purpose and meaning. 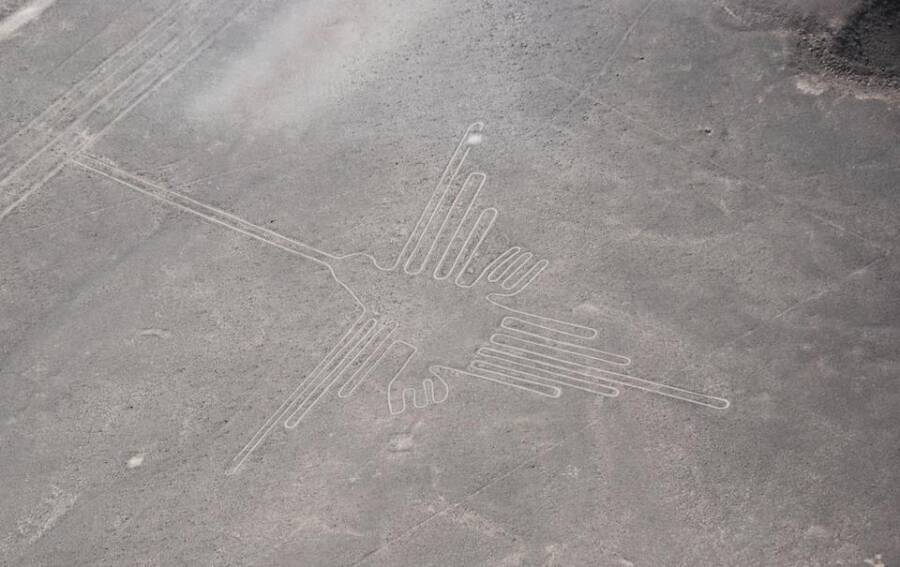 Masaki Eda
Hundreds of geoglyphs have been excavated as part of the ancient Nazca Lines including this hummingbird depiction.

As UNESCO describes these ancient drawings:

“They are the most outstanding group of geoglyphs anywhere in the world and are unmatched in its extent, magnitude, quantity, size, diversity and ancient tradition to any similar work in the world. The concentration and juxtaposition of the lines, as well as their cultural continuity, demonstrate that this was an important and long-lasting activity, lasting approximately one thousand years.”

For now, the Nazca Lines site will remain closed off to visitors. The site is normally restricted from the public because of the fragile nature of the carvings and even high-ranking government officials are reportedly forbidden to walk around the site without special authorization.

The only way to see these mesmerizing images is by overhead plane tours or by viewing them from designated vantage points.

“The figure was barely visible and was about to disappear because it is situated on quite a steep slope that’s prone to the effects of natural erosion,” the Ministry of Culture said in its statement.

Luckily, this image was found before it could be eroded away, providing a new window into an ancient culture that scientists have yet to fully understand.

“It’s quite striking that we’re still finding new figures,” Johny Isla, Peru’s chief archaeologist for the Nazca Lines, told Spanish news agency Efe, “but we also know that there are more to be found.”

Next, learn why some people believe ancient Sumerians were visited by extraterrestrial beings and go inside the unsolved mystery of the Georgia Guidestones, America’s very own stonehenge.