The Stand By Your Ad provision of 2002 was intended to decrease negative campaigning. Instead, adding "I Approve This Message" increased the number of negative ads and made them more trustworthy. 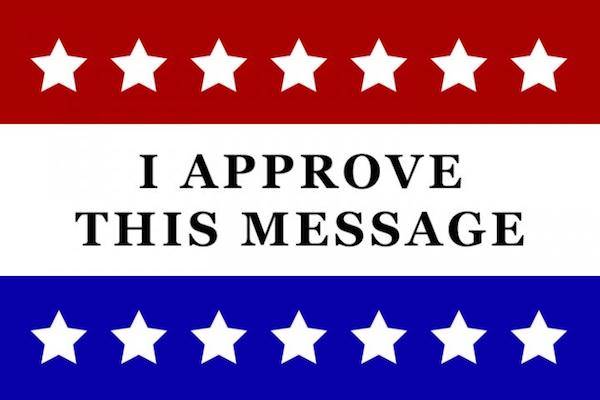 These are probably familiar words to you. You hear them at the end of every campaign commercial candidates for federal public office. That’s been the case since 2002 when the Bipartisan Campaign Reform Act (also known as the McCain-Feingold act) was enacted. The legislation included something called the “Stand By Your Ad” (SBYA) provision, requiring candidates running for federal office to include the tagline in their ads.

The purpose of the act was to combat negative campaigning by forcing candidates to affix their names to attack ads. But a new study published in the February 2018 issue of Journal of Marketing Research shows that the act actually resulted in an ironic effect: the number of attack ads since the SBYA provision went into effect has increased. In 2000, 29 percent of campaign ads were negative. In 2012 the number had increased to 64 percent.

And not only have the negative ads increased, the study shows that the approval tagline actually gives the ads more credibility in the eyes of viewers.

All That’s Interesting spoke with Clayton Critcher, a professor at the Haas School of Business at the University of California at Berkeley and one of the lead researchers in the study.

“Our research points out that SBYA certainly hasn’t disincentivized negative messaging and in fact has, likely unknowingly, made them more effective,” noted Critcher.

In addition to evaluating ads, the study also evaluated the candidates.

“So in that sense, we make both claims — the ads are more effective, and thus the candidates who sponsor them are evaluated more positive and seen to be more honest.”

To conduct the research, Critcher along with Minah H. Jung, Assistant Professor of Marketing at New York University’s Stern School of Business and the study’s co-author, used a combination of real and fictional ads to in an experiment involving 2,000 people.

Participants were not generally familiar with the candidates in the ads, and most ads didn’t state the political party of the candidate.

Critcher explained, “Typically policy-based attack ads focus on a collection of policy positions. Often it is hard to know the exact nature of the position that is being attacked,” said Critcher. For example, the message will be that the opposing candidate is bad on crime or bad on immigration “without offering a clear picture of the policy being attacked.”

Though attack ads may have a bigger impact on potential voters, they also suffer from voter skepticism.

The study found two major reasons for the boost in perceived credibility. The first came from an experiment where the participants were told that the tagline was required by law. The boost in this case came from people’s view of the ad as legitimate because it was regulated by law.

The second boost in credibility, in which participants weren’t made aware of the law, had to do with the notion that a personal endorsement by the candidate served as a stamped promise of the ad’s truth value.

There was one measure of the study that focused on the overall evaluation of an ad. This measure did find that people who found an attack ad more believable because of the endorsement tagline “also felt more positively toward the message.”

The research references an analysis by CNN which found that in the week before the 2016 presidential election, 92 percent of ads were negative. When it comes to the current political climate, it’s impossible to concretely determine the factors in the drastic spike.

“Our research shows that the mandatory inclusion of SBYA certainly didn’t achieve the goal of reversing negativity in political messaging, but we can’t speak to why negativity has grown in politics,” said Critcher.

So if the “I approve this message” tagline wasn’t a part of the equation, would we begin to see a decline in negative campaign ads?

“If the tagline were no longer mandatory and candidates did not include it, then presumably this would make negative ads less believable,” Critcher said. He continued, “politicians may begin to notice that their negative ads are being greeted with more skepticism, which — if they do notice this — might lead them to scale back on their negativity.”

If the tagline wasn’t mandatory, and opponent bashing did decrease, there’s still the question of transparency when it comes to candidates and the messages they are endorsing.

In response to this, Critcher proposed that “it may be better to require sponsoring candidates to appear on the screen during the ad merely to identify themselves, but not to ‘approve the message.'”

By visibly including the candidates in the ads, the ads would still provide a level of transparency while avoiding, as Critcher puts it, “triggering unintended consequence of making the ad seem more truthful.”

Now you may be interested in JFK’s 1960 West Virginia campaign. Then take a look at the six most tasteless ad campaigns.