Nematodes: The Microscopic Organisms Taking Over The World — And Our Bodies

"I can't imagine what an insect infected with a mermithid nematode must feel. Scaled to human size, a mermithid [nematode] would be at least as intrusive as an anaconda coiled among the intestines." 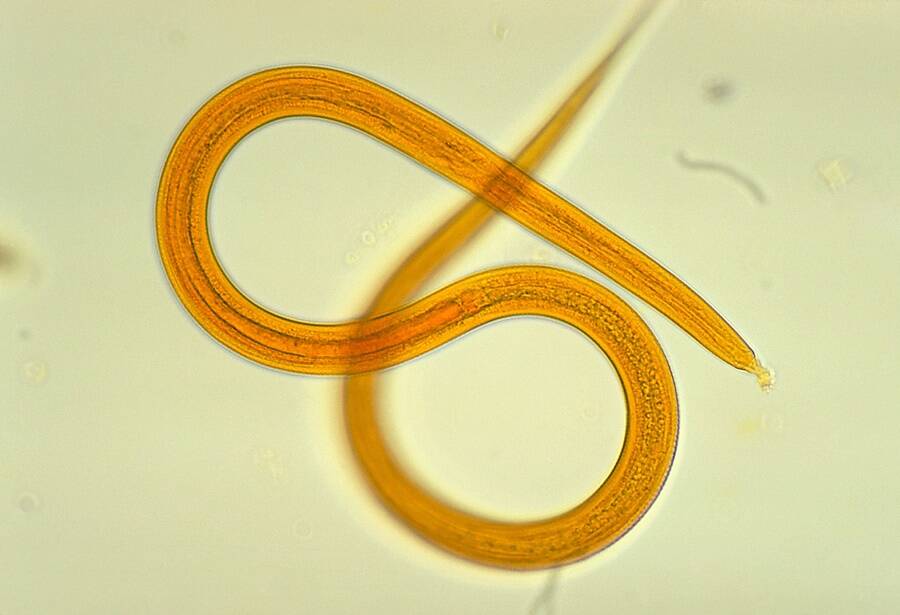 BSIP/Universal Images Group/Getty ImagesNematodes, or roundworms, are the most abundant animals on Earth.

Nematodes are the most populous animals on Earth but little is known about them. While some species are used to combat crop pests, others can inflict severe damage to the environment, including inside plants and animals. Some nematodes live inside humans as parasites and cause infectious disease in our bodies. 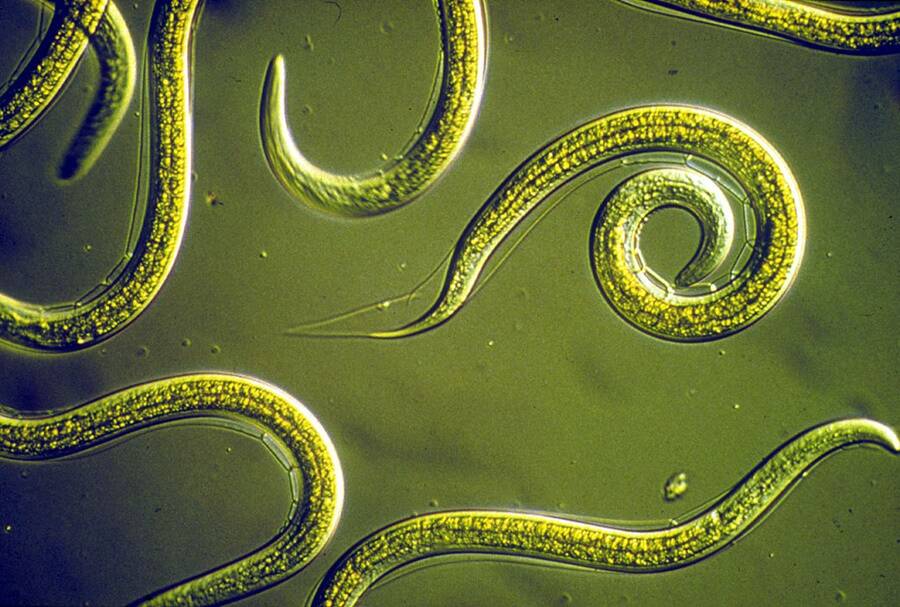 Although nematodes are roundworms, they aren’t true worms like the ones most people know about. They’re microscopic multicellular organisms that pretty much rule the Earth.

Nematodes are the most numerically abundant animals on the planet. Four out of every five animals on Earth is a nematode, and there are 57 billion nematodes for every single human being.

Structurally, each nematode is “a tube within a tube.” Food goes in via its mouth at one end of its body, through an intestine, and out at the opposite end, near its tail. 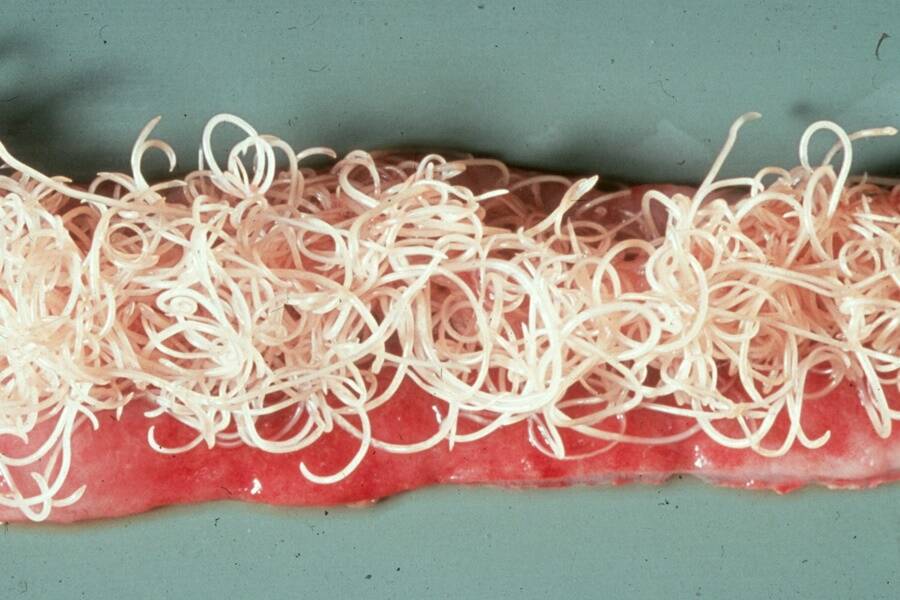 Even with a tiny tube for a body that’s often less than a millimeter long, nematodes contain complex biological systems. Each organism has its own nervous system, digestive system, excretory system, and reproductive system. They do, however, lack a respiratory system.

Because of their size and scope, it is difficult to know exactly how many exist. But one recent estimate pegged the number at more than 400 quintillion individual nematode worms. They’re members of 23,000 already identified species. Some biologists believe there could be as many as one million different species.

These microscopic organisms are literally everywhere. They inhabit the soil, fresh and salt water, even animals — and even us. Most roundworms are good, encouraging growth and attacking environmental “pests,” while some are bad, particularly the parasitic kind that causing sickness and sometimes death. 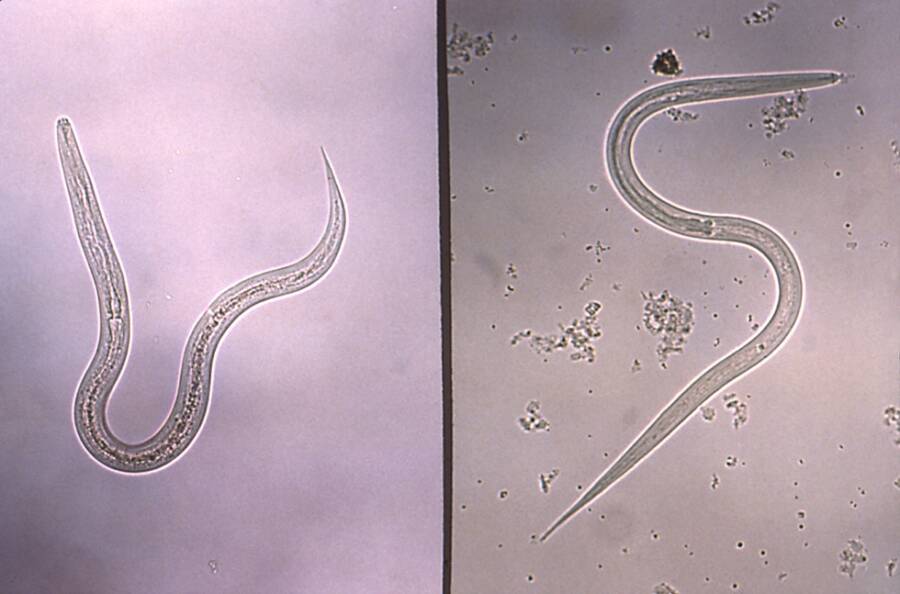 Smith Collection/Gado/Getty ImagesHookworms are parasitic roundworms that can infect humans.

There are also some that harm themselves: cannibal nematode worms called Pristionchus pacificus prey on others from their own species, though they make exceptions for their own young. That’s because of a “self-identifier” gene known as SELF-1. If a nematode of this species detects another nematode with the same SELF-1 gene, it won’t eat it.

Nematodes can be parasitic and sometimes even eat other nematodes — except for its own kin.

In his book The Variety of Life, British biologist Colin Tudge estimates that one in every two animal species on Earth is host to at least one parasitic nematode species that lives exclusively with it.

But animals fare better than others. For example, entomologist Alex Wild described a ant he found in Belize was infected with a mermithid, a parasitic species of nematode, as evidenced by its shrunken head and bloated abdomen.

“I can’t imagine what an insect infected with a mermithid nematode must feel,” Wild wrote on his website. “Scaled to human size, a mermithid would be at least as intrusive as an anaconda coiled among the intestines.” 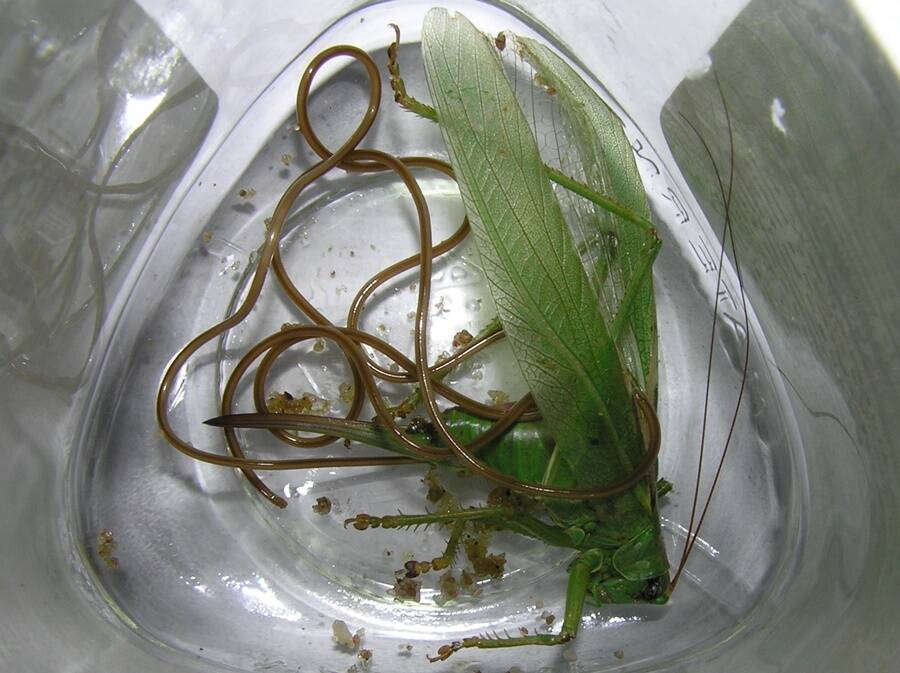 Parasitic nematodes will grow inside its host until it is mature enough to break free. In the case of Wild’s trap-jaw ant, the nematode infected the poor arthropod via contaminated soil in its brood nest. And over time, as the nematode feeds and grows, the parasite with slowly kill its host. The mature, newly freed nematode will then go on to mate and lay eggs that will likely grow to infect another host.

Dogs and cats infected by parasitic nematodes can experience diseases such as river blindness, hookworms, and elephantiasis. One 2013 study out of the U.K. estimated that every two days, dogs in Bristol produce as many of the parasitic nematodes Toxocara as there are humans on Earth — roughly 7 billion — through their poop, infecting the soil and posing a danger to children. The parasite can cause vision loss and possibly asthma or epilepsy.

But the Toxocara isn’t nearly as frightening as the largest nematode in the world: the Placentonema gigantissima. First discovered in a sperm whale’s placenta in the waters between Russia and Japan, this nematode can grow up to 30 feet long — even longer than a London double-decker bus. 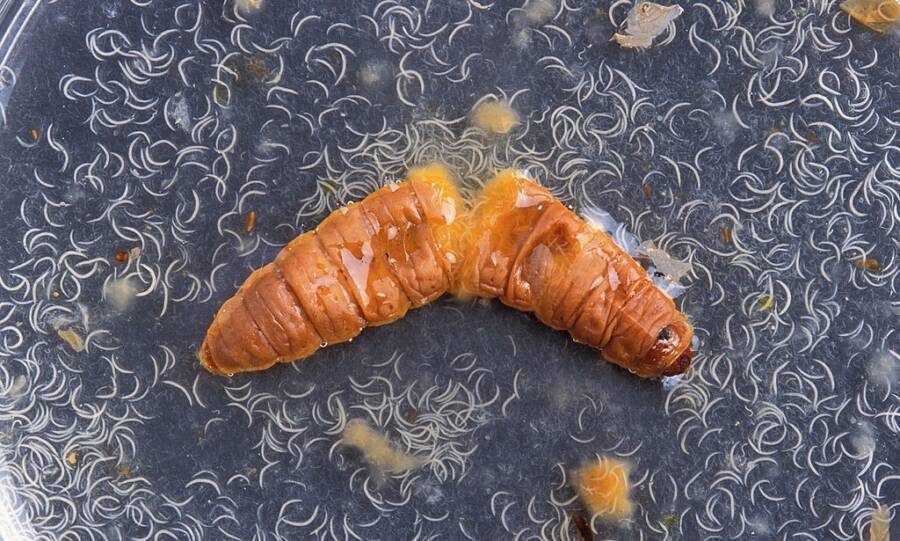 Wikimedia CommonsSome nematodes are beneficial for the environment and can act as natural insecticides against soil-dwelling crop pests.

Roundworms don’t just wreak havoc on animals, they attack plants too. Puncturing plants’ cell walls with their pointy mouths, certain species of nematodes further break apart plants by applying a special saliva. After the nematode has done its job, it leaves its plant victims even more vulnerable to bacterial and fungal infections.

The good news is there are sure signs that indicate when a crop has been infected by these parasitic organisms. Usually infected plants will show signs of swelling, unusual growth, and dead areas.

The golden nematode, for example, is an invasive species that has long threatened potato and tomato production in North America and Europe alike. Its larvae attach to these plants’ roots and suck out its nutrients, inhibiting growth. They’re especially tough to eliminate since their eggs can remain dormant in soil for up to 30 years.

These tiny organisms pose such a huge threat that the U.S. Department of Agriculture describes them as “potentially more dangerous than any of the insects and diseases affecting the potato industry.” The federal government even teamed up with Cornell University in August 2019 to open the Golden Nematode Quarantine Facility, backed by $1.6 million in government funds, in order to come up with ways to combat this food-threatening pest.

Some Nematodes Even Infect Humans 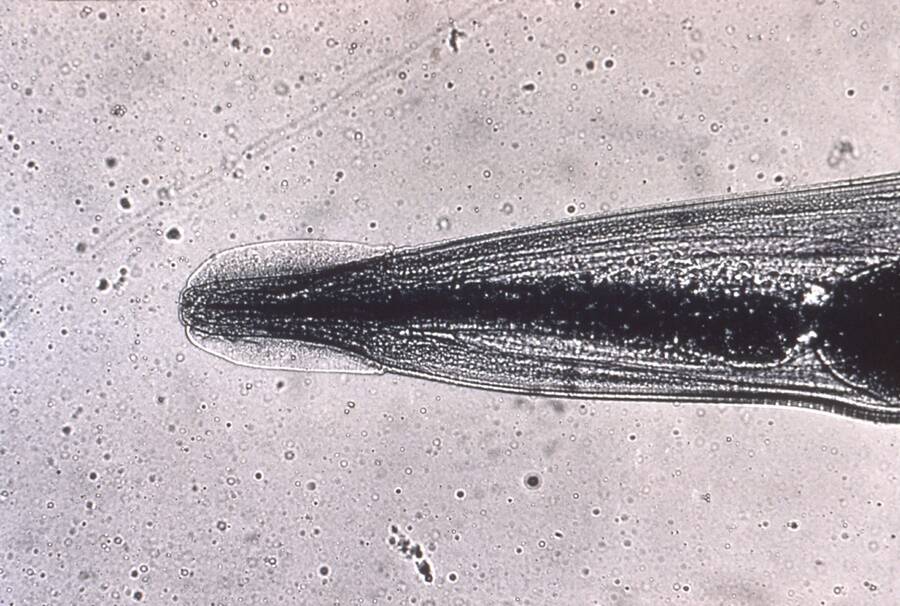 Smith Collection/Gado/Getty ImagesPinworms, or Enterobius vermicularis, are the most common human-parasitic nematodes in the United States.

Human-parasitic nematode worms are a major cause of human disease all over the world, including in the United States. The most common in the U.S. is the pinworm, which back in the 1980s was estimated to infect more than 42 million people.

Other species can infect a human host via skin penetration — like the threadworm Strongyloides stercoralis and the human hookworm — usually when someone walks barefoot in contaminated soil. They don’t have eyes to see, but they use their other senses to detect human skin. Our feet are much warmer than the cold surrounding soil, which is how pinworms detect the presence of a warm-blooded host.

Pinworm infection, caused by the Enterobius vermicularis, is the most common type of intestinal worm infection in the U.S., and is easily spreadable among communal spaces since the eggs spread through skin contact and infected clothing or food. They live inside the human host’s colon and rectum. Female pinworms will lay eggs on the skin around the anus while a person sleeps which usually causes itching around a person’s anus.

Chronic pinworm infection, or infection by another type of human-parasitic nematode, can cause anemia, loss of appetite, gastrointestinal distress and — in the most severe cases — death.

Depending on the species, nematodes can either cause harm or provide benefits to plants, animals, and humans.

When the doctors performed a colonoscopy, they found a female egg-carrying pinworm. The woman was believed to have caught the infection from her five-year-old daughter, whose classmates had been diagnosed with pinworm.

People infected by these parasites can seek drug treatment from medical professionals, however, drug resistance from certain species has become a growing concern. 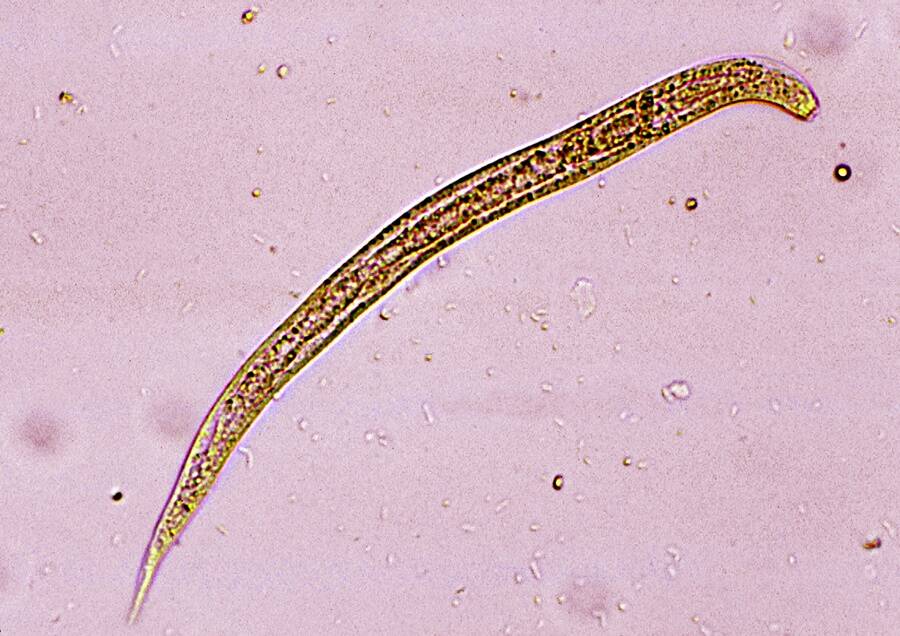 They’re Not All Bad

Some types of nematodes can be scary, dangerous, or just plain gross, but they aren’t all bad. Most of them actually benefit the environment because they feed on dead bugs, decaying matter, and other nematodes. They also play a crucial role in the Earth’s carbon cycle; the more nematodes there are in a given soil sample, the more carbon that soil is likely to store. Which means better understanding nematodes may be crucial as we come up with new ways to combat climate change.

But even though nematodes are such a significant part of our environment, living within us and in every inch of soil, we still know very little about them.

To Nathan Augustus Cobb, the “father of nematology,” the reason for that is clear:

“It will be found, in most cases, that [popularly studies animals] are serviceable to man; they furnish him food, raiment, or some other valuable material; or they are ornamental or attractive as pets, or useful in some other way. Now, it is not unfortunate for the nematodes that they are none of these, but it is unfortunate for us, if on that account we are prevented from knowing much that would be most useful to us, as well as interesting and diverting. Nematodes do not furnish hides, horns, tallow, or wool. They are not fit for food, nor do they produce anything fit to eat; neither do they sing or amuse us in any way; nor are they ornamental — in fact, when they are displayed in museums the public votes them hideous….What claim, then, one may ask, can such beings lay to our attention?”

Perhaps none. Or perhaps, if you dig a little deeper into your backyard and into the annals of scientific research, you’ll find a lot of fascinating stuff.

Now that you’ve learned about nematodes, the most populous animal on the planet, take a look at 13 fascinating photos of Cordyceps and the killer fungus’s insect hosts. Then, learn about six of the most horrifying parasites that can infect the human body.