Neolithic Tomb In Transylvania Yields 6,000-Year-Old Skeletons With Urns On Their Heads

Combing the grounds before impending construction, researchers unearthed an ominous 6,000-year-old cemetery and evidence of a Celtic settlement dating back 2,200 years. 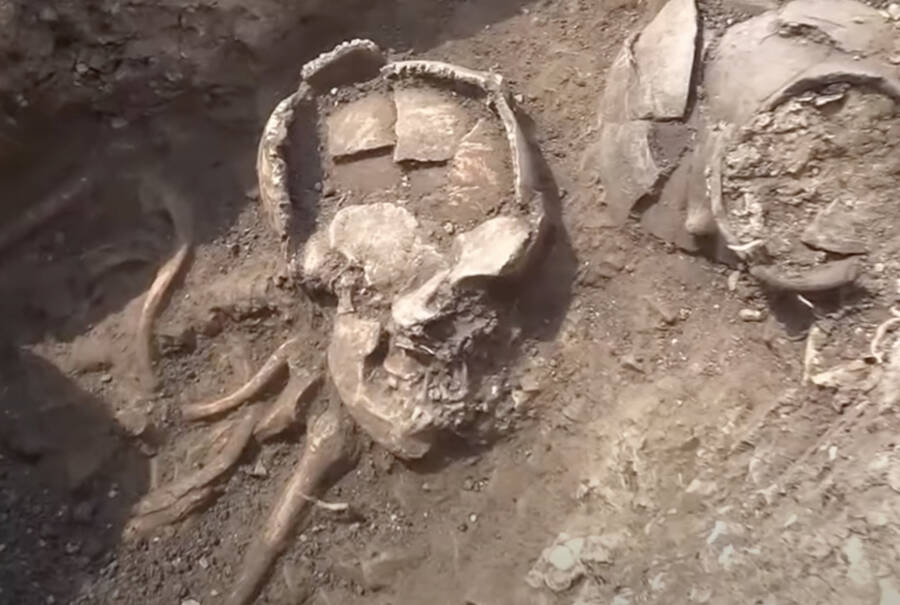 YouTube/Gherla InfoThe Neolithic skeletons were found buried with urns placed at their skulls and feet.

With a construction project in Transylvania’s capital of Cluj-Napoca set to begin, Romanian researchers combed the grounds for anything historic that could be disturbed. They found a Neolithic cemetery that was both macabre and peculiar, including 6,000-year-old skeletons — which had urns placed at their skulls and feet, likely as offerings for the afterlife.

It was unclear what precisely these vessels contained, according to LiveScience. Researchers have since posited they likely held food or drink for the deceased to nourish and replenish themselves while passing into the great beyond. Perhaps most shocking was evidence of an entirely different era found buried nearby.

Excavations on the 10,000 square-foot plot of land began in July 2021, according to Daily Mail. Traces of the Neolithic settlement were remarkably complemented later by the discovery of a Celtic settlement dating back 2,200 years. While experts continue exploring the dig site, they eagerly await learning more about the buried.

“Their story must be told, revealed, through such excavations,” said Paul Pupeza, an archaeologist at the National Museum of Transylvania who helped in the excavation. “By learning more about them, we will know more about ourselves. We are the first to get our hands on these fragments, after thousands of years. 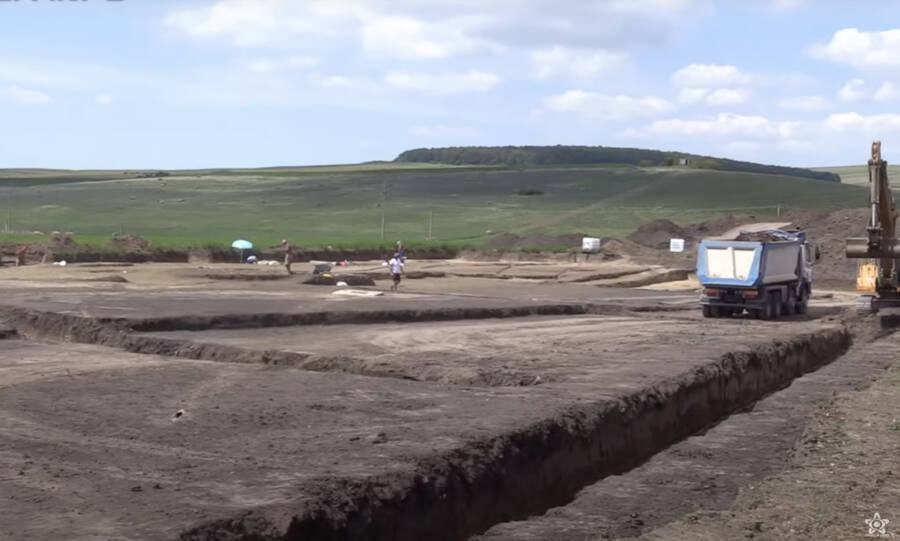 YouTube/Gherla InfoThe burials and settlement were found before an impending construction project.

Impending research on the human remains could shed light on the final days of those who were buried. From their sex to their estimated age to any potential diseases revealed by their bones, a comprehensive study is sure to clarify how, when, and why these people died.

As it stands, the evidence of Neolithic and Celtic activity are certainly enlightening on their own. Researchers noted that some of the Stone Age graves were fortified with wood typically used on their homes, and thus more sophisticated than others — presumably denoting a social hierarchy around burials.

While the curious urns placed at their heads and feet remain a mystery, researchers discovered a sizable pit in the area that these Neolithic people used as food storage. Traces of waste, however, denoted that this inevitably became a designated landfill site. 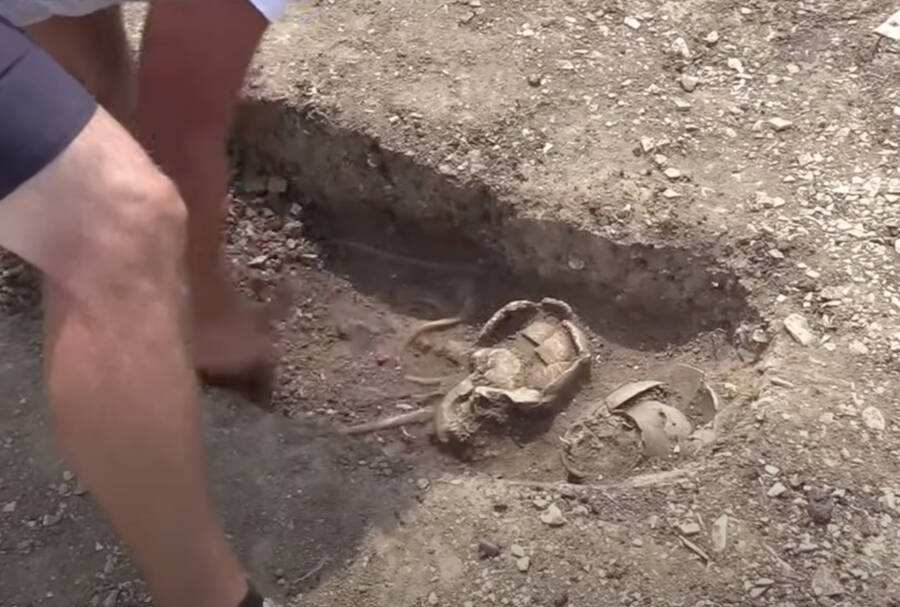 YouTube/Gherla InfoResearchers are currently awaiting to learn about the sexes of the deceased.

Unlike their Stone Age counterparts, the Celts had entirely different burial rituals. The unearthed settlement revealed they inhabited this area during the Dacian Kingdom between 2,200 and 2,000 years ago. Instead of carefully burying their dead in the dirt, these people incinerated their dead.

Researchers found urns that held their cremated ashes buried in the ground, alongside tools and goods made of iron. Perhaps most fascinating is that these two disparate approaches to death sat so closely alongside each other.

While some may find evidence of a Celtic presence in Romania surprising, these tribal peoples did not exclusively inhabit Northern Europe and the United Kingdom — but traveled to occupy eastern territories as far as Turkey, as well. 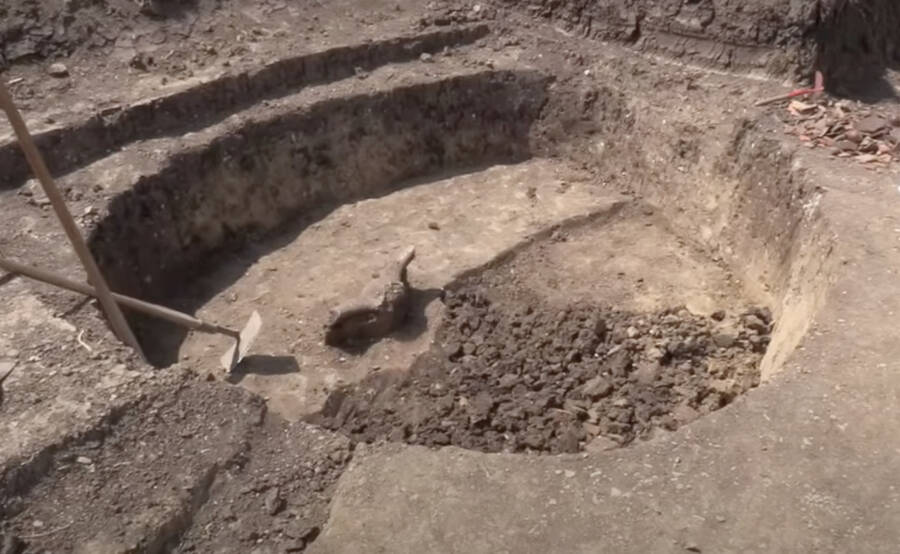 Ultimately the precise reasons for the burial of these artifacts remain unknown. Researchers are currently studying the trove of pottery vessels unearthed from the graves and landfill pit, as further information about the dead trickles in. As for Romania, the country yielded far more historic finds as recently as 2014.

With the Ciur-Izbuc Cave revealing 400 impressions in stone that were radiocarbon dated to 36,500 years ago, Romania has provided historians with some of the oldest human footprints in all of Europe. 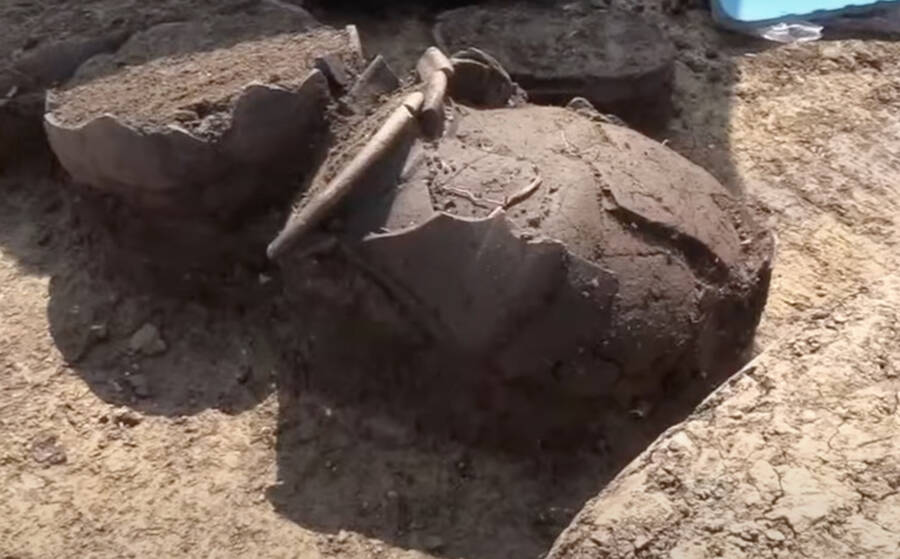 YouTube/Gherla InfoSome of the many pottery vessels unearthed at the site.

With the Cluj-Napoca dig site protected for now, the stunning remains of two civilizations separated by thousands of years have only begun to reveal their riches.

After reading about the Transylvanian skeletons found buried with urns for the afterlife on their heads, learn about the single largest mass child sacrifice site in the world. Then, read about the mass graved linked to an 18th-century plague in Romania.