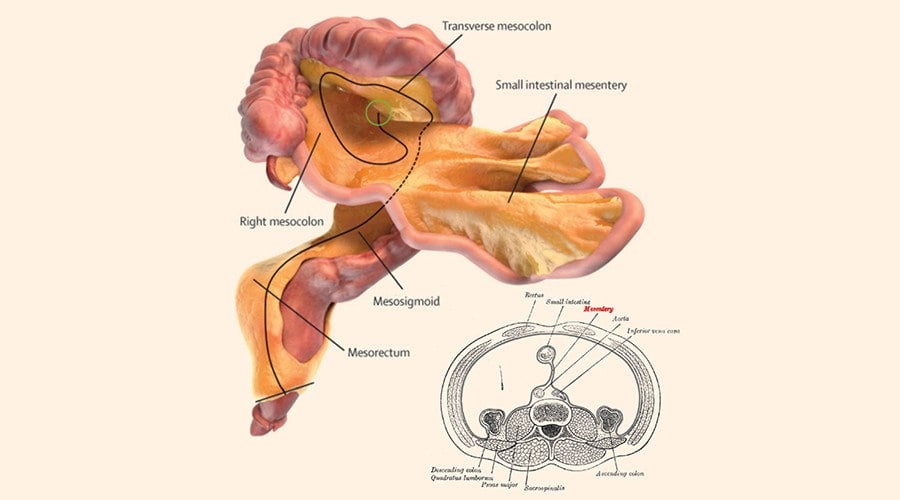 Previously thought to be a group of fragmented and unimportant structures throughout the digestive system connecting the abdomen to the intestine, the mesentery, as recently reported in the medical journal The Lancet Gastroenterology & Hepatology, is actually one continuous organ.

While the mesentery’s function, however, is not entirely understood, the Irish researchers who discovered it say that it could hold the key to treating digestive diseases. Furthermore, its reclassification opens up “a whole new area of science,” in the words of J Calvin Coffey, one of the researchers at the University Hospital Limerick who first discovered the mesentery. Coffey continued:

“When we approach it like every other organ, we can categorize abdominal disease in terms of this organ… Now we have established anatomy and the structure. The next step is the function. If you understand the function you can identify abnormal function, and then you have [the] disease. Put them all together, and you have the field of mesenteric science.”

Following the mesentery’s reclassification, medical students worldwide are being taught that it is a distinct organ. Even Gray’s Anatomy, one of the world’s most famous medical textbooks, has updated to include the new definition.

Technically speaking, the mesentery is a double fold of peritoneum, or abdominal cavity lining, holding the intestine to the wall of the abdomen. It is what keeps a person’s guts inside their body following an unfortunate encounter with a sharp object across the stomach.

And while Leonardo da Vinci described it as far back as 1508, medical researchers ignored it in the centuries since — until now.

After learning about the mesentery, a recently uncovered human organ, check out these 18 amazing facts about the human body.