Starting on November 23, 1966, New York City was plagued by three days of suffocating smog in what remains one of the worst air pollution episodes and environmental disasters in American history. 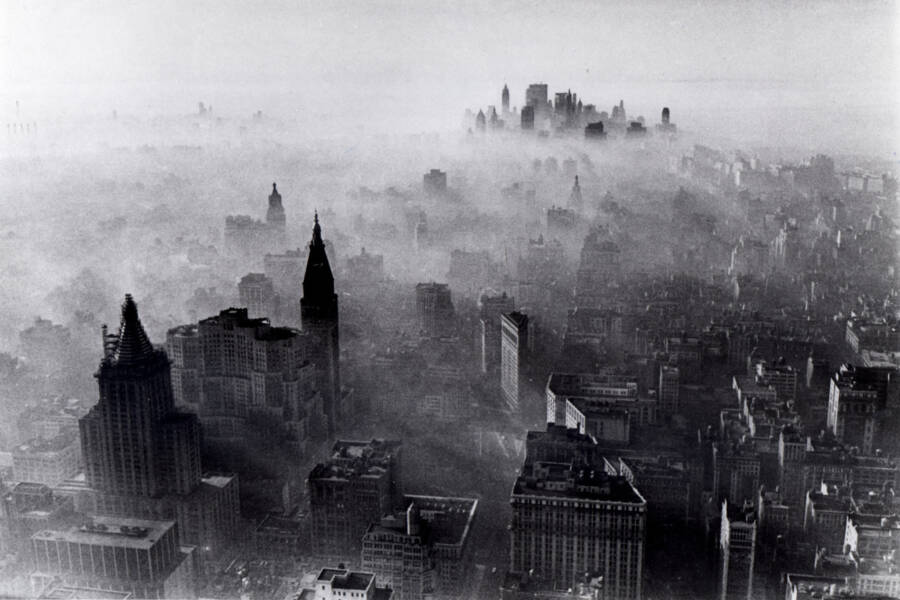 Wikimedia CommonsCaptured on Nov. 24, 1966, the smog blanketing New York City was so deadly that it spurred anti-pollution measures.

On Thanksgiving weekend in 1966, a noxious combination of sulfur dioxide and carbon monoxide wrapped itself around New York City. Known as the New York City smog of 1966, it remains one of the worst pollution episodes in modern American history.

New York City smog and pollution was absolutely disastrous during the 1960s. Throughout this time period, deaths from pulmonary emphysema and chronic bronchitis began to skyrocket, linked to widespread smoking and how dirty the air was overall.

But the 1966 New York City smog was especially awful — so much so that it killed some 200 people. According to Gothamist, varying reports estimate that smog killed anywhere from 169 to 400 people throughout that year.

Let’s explore a time when New York City was besieged by smog — and remember its presence as a cautionary tale for the future.

As is (somewhat) visible in the photo below, New Yorkers did have some prior experience with the horrid conditions wafting across town in 1966. The 1953 smog emergency also occurred in late November, with some people even attributing the death of Dylan Thomas to the six-day fiasco. 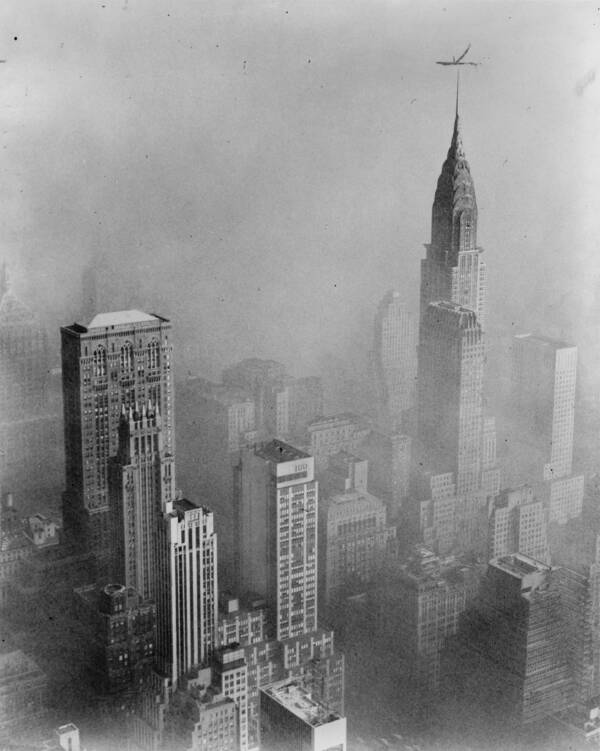 But during 1966, the smog got so hazy that officials warned people with heart, lung, or respiratory issues to stay inside until it cleared. The city’s commissioner of air pollution control, Austin N. Heller, said “the pollution count was possibly the highest in the city’s history” at the time.

As for the people on the ground who did come face-to-face with this treacherous smog, they encountered a New York that those dwelling in the city today could hardly imagine.

“I not only saw the pollution, I wiped it off my windowsills,” said Albert Butzel, an environmental lawyer who moved to New York in 1964. “You’d look at the horizon and it would be yellowish. It was business as normal.”

“My only complaint is the air! It’s so dirty,” one housewife said in an interview at the time. “I have to wash my children’s clothes so many times a day. They never seem clean. It seems to be coming from over there in New Jersey.”

While this quintessential New York quarrel with the neighboring Garden State is a reminder of long this feud has been going on, the root cause of the smog was naturally much more complicated than that.

The Fallout Of The New York Smog Emergency

For many New Yorkers, the smog emergency in 1966 was the first time they had ever witnessed how dangerous unchecked industrialization could be. This increasing environmental consciousness may have been the starkest in New York, but it quickly became a national issue.

In a time when most of us take the Environmental Protection Agency (EPA) for granted, it’s worthwhile to remember an era when citizens were basically left to fend for themselves in the smog. But after scores of New Yorkers died from the dangerous air conditions, Americans began to realize that something had to change.

The countrywide commitment to ensuring the air and water were clean spurred the creation of the EPA in 1970. For New York City, that moment couldn’t come soon enough — as countless residents routinely experienced “snowing” ash from incinerated garbage.

According to a study published in 2001, the lead quantities in Central Park Lake sediments correlated strongly with the amount of particles emitted by this burning trash during the 20th century.

It was later found that on Thanksgiving in 1966, a noxious combination of sulfur dioxide and carbon monoxide had basically wrapped itself around the city.

That meant unusual warmth and haze so thick people could barely endure the outdoors. This eventually led to the hundreds of estimated deaths.

The harmful effects on people’s health from the pollution were glaring: The fastest-growing cause of death in New York in the 1960s was pulmonary emphysema. Deaths from chronic bronchitis were soaring as well.

“On the autopsy table it’s unmistakable,” a city medical examiner said at the time. “The person who spent his life in the Adirondacks has nice pink lungs. The city dweller’s are black as coal.” 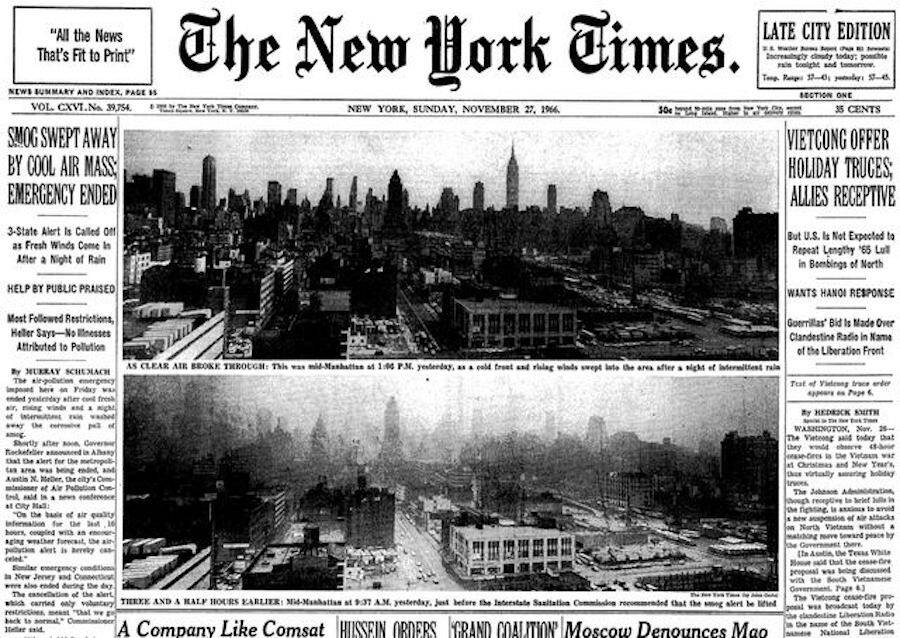 In 1968, a report from the U.S. Department of Health finally concluded that “the period from November 24 through 30, 1966, created adverse health effects. Researchers in New York City found an increase in death rate of approximately 24 deaths per day during the period.”

While pressure by local regulators and activists led to the New York City Clean Air Campaign and the creation of the EPA, not all parts of the world have been quite as stringent over the years. One need only learn that the photo below of Almaty, Kazakhstan is a real image — and not a composite. 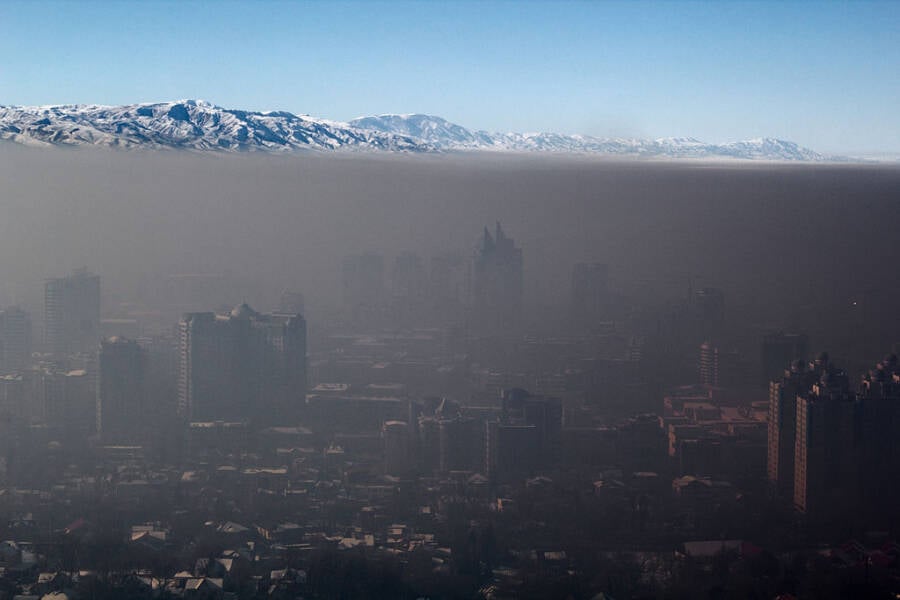 Wikimedia CommonsThe atmospheric discrepancy here is the result of an inversion, under which smog essentially gets trapped.

The atmospheric conditions pictured above in 2014 were strikingly similar to those of New York City in 1966. Sadly, Kazakhstan remains one of the most polluted countries in the world in modern times.

While New York City is undoubtedly better off today than it was in the 1960s in terms of pollution, it’s crucially important that this environmental issue is never ignored or pushed to the side in the future.