‘The Stuff Of Nightmares’: New Zealand Boy Finds A Three-Foot Earthworm In His Backyard

New Zealand has hundreds of varieties of earthworms, some of them quite large, but most live far away from human society. 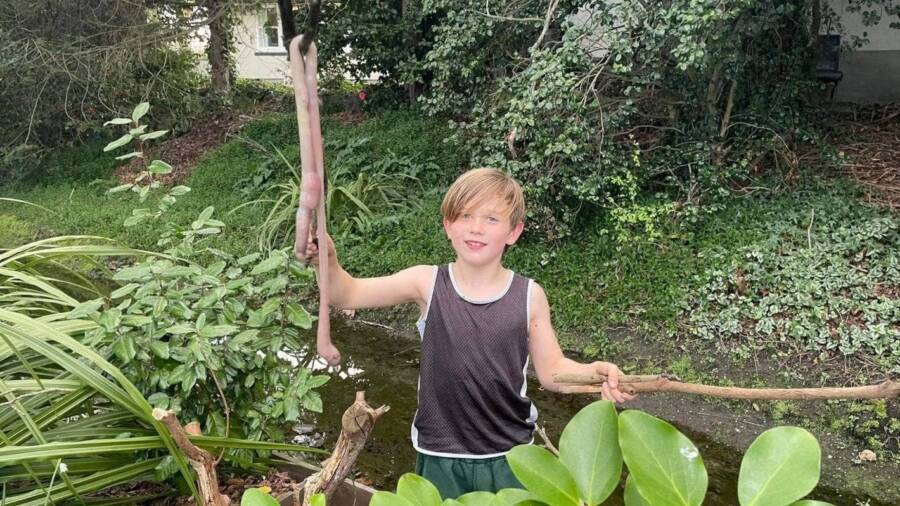 CHRIS DOMIGANBarnaby Domigan with the giant earthworm he found in New Zealand.

Nine-year-old Barnaby Domigan was digging around a riverbed at the edge of his parents’ property in Christchurch, New Zealand, recently when something caught his eye. There, in the water, was the biggest earthworm he’d ever seen. Unlike the tiny worms that sometimes wriggle out of the dirt, this one was about three feet long.

“I kind of thought it would have been a worm because it had the shape of a worm, but not the size,” Barnaby told Checkpoint. To Stuff he added: “I thought it was massive, and amazing, and a little bit disgusting.”

The worm looked “slimy” and “squishy,” he said, and Barnaby didn’t touch it because he worried it was covered in bacteria. Instead, he called his father, who took a picture of Barnaby holding up the worm on a stick.

“He was digging around and stumbled upon – in the water – this giant, disgusting worm,” Barnaby’s mother Jo told Checkpoint. “I think it was already deceased when he came across it, so sort of just bobbing on the on the edge of the water there and he dug the stuck in and pulled it up and then my husband took the photo.”

Describing the worm as “the stuff of nightmares”, Jo added: “As I saw the photo, I just, you know, wanted to be sick in my mouth. It is so huge and … I wonder if it could have been floating in the water and if it had taken on some water so it was sort of bloated.”

According to Fox 8, Barnaby was more thrilled with the discovery than his horror-struck mother. He told the site that he likes learning about “weird animals” and that he named the worm “Dead Fred.” Barnaby even wanted to keep the strange find, but his parents put their foot down.

“I tried to convince my dad to keep it in a plastic bag, but he wasn’t really in on that idea,” Barnaby told Checkpoint. “I think it’s because adults don’t really enjoy giant worms in their houses, so if I was an adult, I would agree.”

Though Barnaby and his parents weren’t sure if the worm was alive or dead, they decided to put “Dead Fred” back in the river. When Barnaby went to check on the worm a few days later, it had vanished. 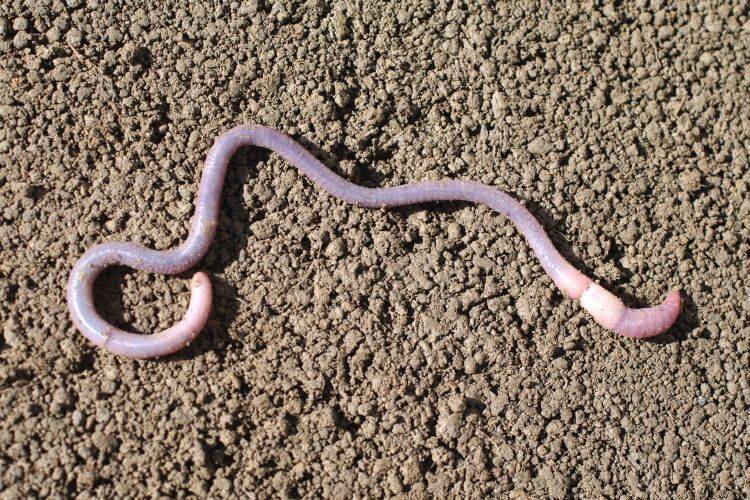 Ross Gray/Science Learning HubOctochaetus multiporus, a giant earthworm native to New Zealand. The country has around 100 species of worm, some of them quite large.

According to Stuff, the giant worm that Barnaby found isn’t that unusual for New Zealand. John Marris, the curator of the University of Lincoln’s entomology research collection, told the publication that while Dead Fred looked like “a creature from the black lagoon,” it was probably a run-of-the-mill native earthworm.

“There are some very large native earthworms known – a meter isn’t beyond the borders of reason,” Marris explained, noting that most live deep in the forest — and not in peoples’ backyards. He added that because New Zealand has 171 native earthworm species, it’s difficult to determine what kind of worm Barnaby had found on his parents’ property.

As Stuff reported, several varieties of New Zealand earthworms can grow up to 30 centimeters, or almost one foot, in length. Among the largest is Spenceriella gigantea, an earthworm that can grow up to 1.3 meters long (or more than four feet).

No matter what kind of worm Barnaby found in his backyard, the 9-year-old is still thrilled with the exciting encounter. Of Dead Fred, he said, “I thought of it as like an amazing discovery and I could not believe my eyes.”

After reading about the New Zealand boy who found an enormous earthworm in his backyard, discover the story of the Australian Gippsland earthworm, known as the largest worm in the world. Or, go inside the debate over the existence of the Mongolian death worm.