Between 1977 and 1983, at least 17 Japanese nationals were abducted by North Korean spies, though Japan claims it is likely that hundreds more were taken. 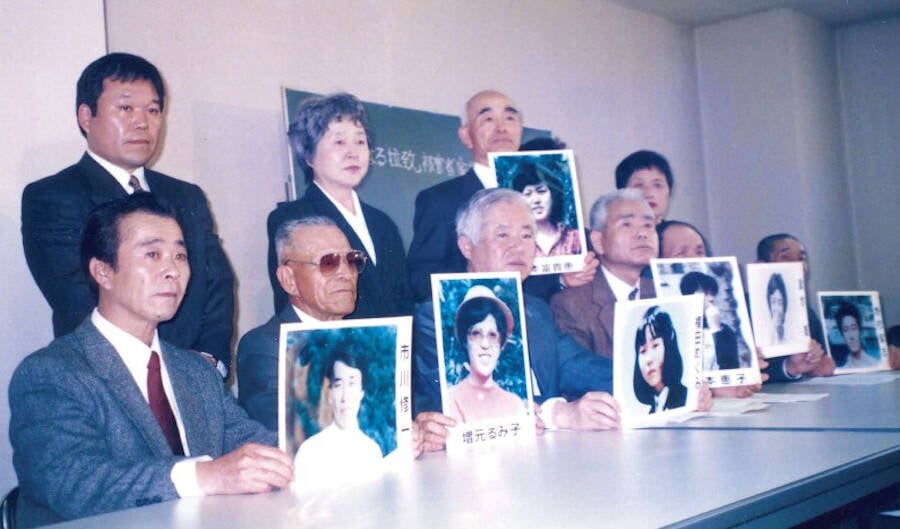 Ministry of Foreign Affairs JapanFamilies of abductees formed the Association of the Families of Victims Kidnapped by North Korea, pictured here.

On the evening of Nov. 15, 1977, 13-year-old Megumi Yokota was walking home with friends from badminton practice in Niigata Prefecture, Japan.

The walk from the badminton court to her front door took only seven minutes, and Megumi was a punctual girl. When she left her friends at a street corner, there were only another 100 yards between her and her waiting mother. But when Megumi failed to return home, her parents knew something was terribly wrong. When an extensive search of the area yielded no clues, Sakie and Shigeru Yokota believed their daughter was gone forever.

But the truth was far worse.

Megumi awoke in the hold of a rusted fishing boat on its way back to North Korea. She was one of at least 17 confirmed victims of the so-called North Korea abduction project, a nefarious mission that saw potentially hundreds covertly stolen from their homes.

It was believed that between 1977 and 1983, Japanese citizens were abducted for various reasons, like bringing new skills into the notoriously reclusive country, teaching Japanese to North Korean spies, assuming their identities, or becoming wives to a group of North Korea-based Japanese terrorists.

This is the crazy true story of North Korea’s kidnapping program. 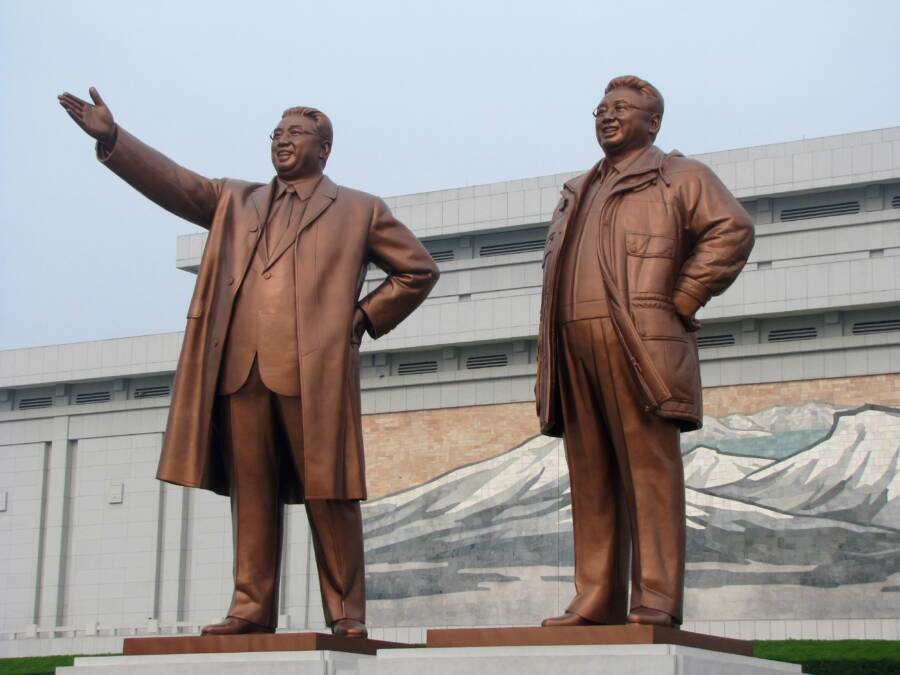 Wikimedia CommonsKim Il-sung and his son Kim Jong-il, whose plans to export their revolution to neighboring countries resulted in the abduction of more than a dozen Japanese citizens.

The origins of the North Korean kidnappings trace back further than Megumi’s disappearance. In 1946, North Korea’s founding dictator Kim Il-sung launched a program that was meant to replace intellectuals and specialists who had fled his regime for South Korea. Thus began a decades-long kidnapping campaign that saw hundreds of South Koreans, mainly lost fishermen and teenagers, stolen from the beaches and coastal towns.

In the years following the Korean War from 1950 to 1953, the newly-formed totalitarian North was in desperate need of both technical experts and propaganda against the South. The shifting border during the war years had stranded many would-be Southerners behind the 38th parallel, where the line between the rival countries was drawn.

Furthermore, Kim Il-sung still hoped to expand his revolution beyond his own borders, and for that, he needed something more than high schoolers and citizens caught between two countries.

The Kidnappings Spread Beyond Korean Shores 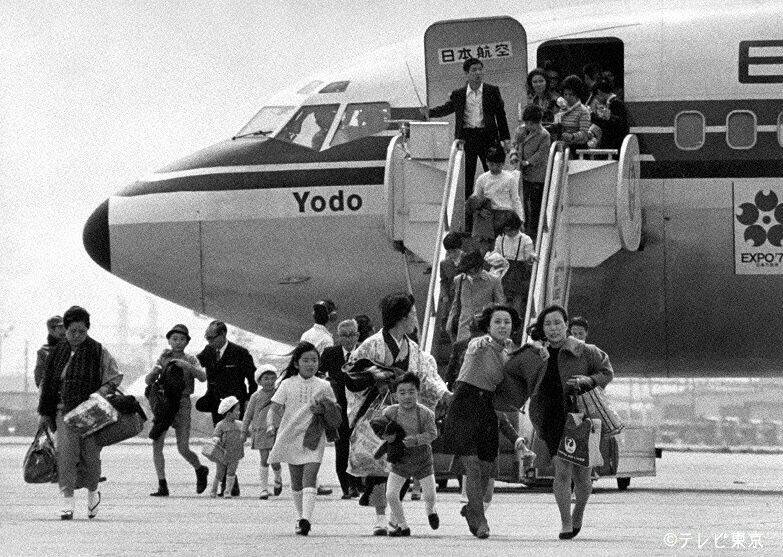 In 1970, the focus of the North Korean kidnappings shifted to Japan after the Red Army Faction, a radical Japanese group, hijacked a plane and flew to Pyongyang where they were granted asylum. Their intention was to gain military training and return to Japan to begin a Communist revolution there.

When the girlfriend of one of the hijackers joined them in Pyongyang, the other young men demanded Japanese wives of their own. Kim Il-sung’s son, Kim Jong-il, decided to send spies to Japan to recruit appropriate candidates by force if necessary.

Japan had several factors that made it appealing to North Korea’s intelligence service. Firstly, it was close, only 630 miles from the port of Wonsan. Second, the Japanese language would be useful for spreading Kim Il-sung’s philosophy of Juche, or “self-reliance,” to the rest of East Asia. Finally, at the time, Japanese passports guaranteed visa-free entry to nearly every nation on Earth, an invaluable tool for spies.

Unfortunately, Japan had no idea that its citizens had just become a prime target of the Hermit Kingdom.

Daily Life In Korea For The Kidnapping Victims 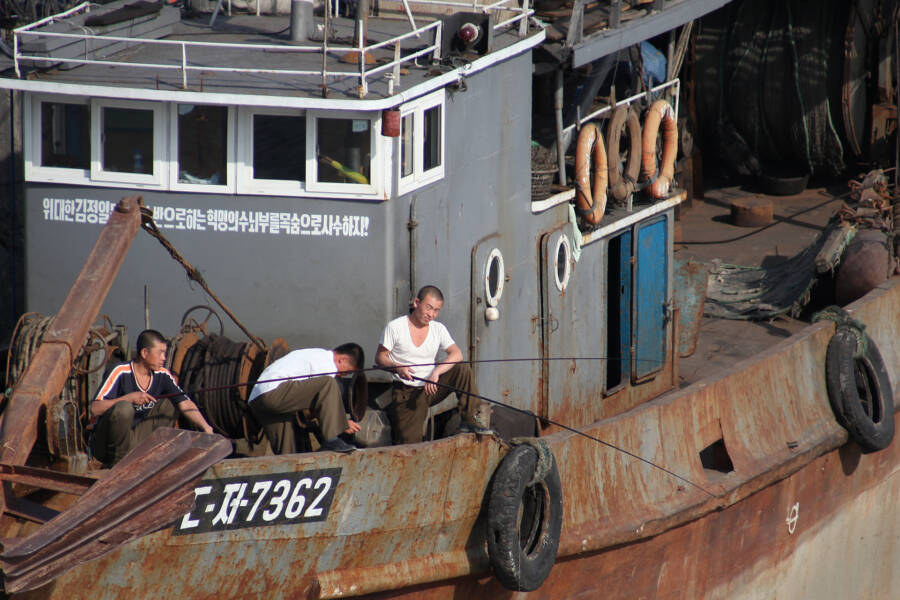 Wikimedia CommonsBetween 1977 and 1983, North Korean operatives used fishing boats like this one, customized with holding cells and stocks of tranquilizers, to kidnap Japanese citizens from coastal towns.

North Korean operatives soon developed a distinctive method for kidnapping their victims. They would cross the Japan Sea in large boats that carried several smaller high-speed vessels disguised as fishing boats. With these, they went on to kidnap at least a dozen more unwitting people throughout the 1980s.

Some abductees, like 20-year-old law student Kaoru Hasuike and his wife Yukiko Okoda, were housed in comfortable villages surrounded by walls and armed guards and put to work in a variety of jobs including translating documents and teaching Japanese to North Korean spies. They were given a small wage which they could use to purchase black-market food for their growing family.

Of course, their freedom was limited. Abductees like Hasuike and Okoda were assigned minders and instructed to write down their thoughts in journals for review. They also attended brainwashing classes on Kim Il-sung’s Juche ideals. “I will clean and wash away your old thoughts and remake you into a Juche revolutionary,” one of Hasuike minders stated.

According to Hasuike, in return for their work, abductees were promised that they could return to Japan — though only after a wave of Juche-inspired revolutions had swept across Asia. As one abductor reportedly put it,”You will return to Japan, where your experiences here will help you secure a position at the very top of the new Japanese regime!”

The Nightmarish Story Breaks In Japan 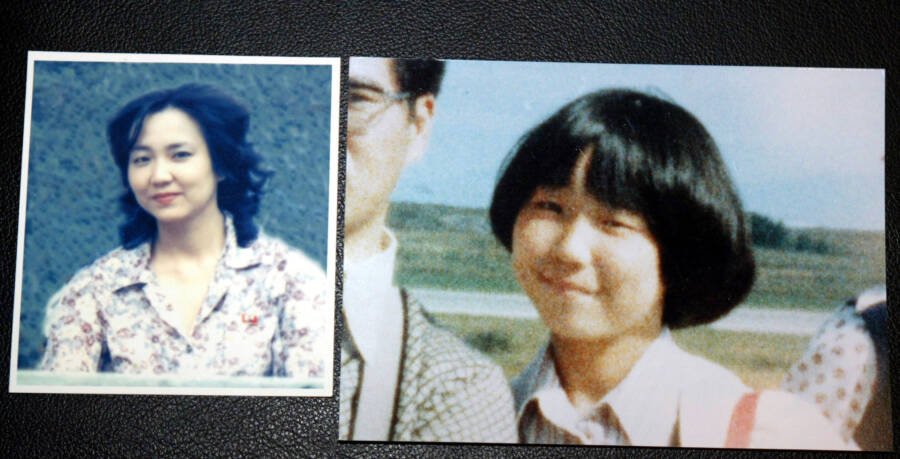 Getty ImagesThe photo on the left has been claimed to show Megumi Yokota, the most famous abductee, as an adult woman. Megumi reportedly suffered from depression and mental illness following her kidnapping, a claim used by North Korea to support reports of her suicide.

Throughout the 1980s, families of victims had received letters signed by their loved ones, usually containing banal descriptions of the weather or impressive industrial projects. Nevertheless, they kept up the hope that the letters were genuine, and families like Megumi Yokota’s began to organize and petition the Japanese government for help.

Finally, a 1995 television documentary named the man who would become the leading suspect in the kidnapping cases: a North Korean spy named Sin Gwang-su. The documentary went into excruciating detail about the disappearance of those unlucky enough to encounter him and the misery of those they left behind.

Meanwhile, North Korea was in the depths of a devastating famine brought on by staggering agricultural mismanagement and the collapse of their ally the Soviet Union. Desperate for food aid, Kim Jong-il, who took power after his father’s death in 1994, was ready to make some concessions.

Fortunately for him, Japanese Prime Minister Junichiro Koizumi was eager for a chance to prove that Japan was more than a protectorate of the United States. Through a series of complicated diplomatic maneuvers, a meeting was arranged for the two leaders, and at the top of the agenda was the missing and abducted Japanese citizens.

In September 2002, Koizumi and Kim met at Pyongyang’s Paekhwawon State Guest House, where Kim made an astonishing apology for the kidnappings and agreed to return five victims. He claimed that six more were dead including Megumi Yokota, whose official cause of death was suicide, despite the fact that her parents insisted that they had seen recent photos of her. 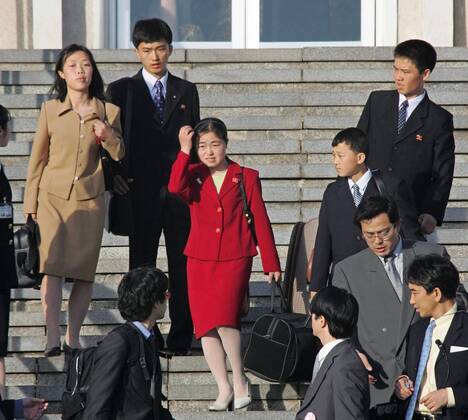 Getty ImagesFive children born to Japanese citizens in captivity were allowed to join their parents in 2004.

Two years later, five children born to abductees in North Korea were also released. Although political leaders seemed satisfied with the result, victims’ families weren’t convinced and a disturbing fact remained unresolved: as many as 800 missing persons could be among those stolen away by Sin Gwang-su and his colleagues.

Many Of The Victims Remain Lost

Since 2004, no further kidnapping victims have been either confirmed or repatriated. It may be that the Kim regime felt they had made a critical error by legitimizing what had been regarded as a conspiracy theory.

Another contributing factor may have been the increasing combativeness of Kim and his successor, Kim Jong-un. In the paranoid atmosphere of Pyongyang, admitting mistakes to those they regard as their enemies is an unforgivable sign of weakness.

Megumi’s family pleads with North Korea to return her.

In recent years, increasing attention has been paid to the victims of the kidnapping program. Learning the whole truth about this project even became a key issue for Prime Minister Shinzō Abe and his successor, Yoshihide Suga.

Although the repatriated abductees have set about rebuilding their lives and describing their experiences to the world, it looks less and less likely that the true fate of the disappeared ones will ever be learned, especially as North Korea grows ever more hostile to the outside world.

While survivors and their families age and the world moves on, the victims of the North Korean kidnapping industry may become just a few more casualties of a war that never ended.

After learning about the crazy true story of North Korea’s kidnapping project, find out the truth behind the North Korean women who were forced into sexual slavery in China. Then, learn the strange tale of Charles Robert Jenkins, whose fateful decision to defect to North Korea left him stranded there for decades.