In The Future, The Earth Might Be Just One Giant Continent, Experts Predict

Researchers have come up with four potential constructions of the next supercontinent, but which of these scenarios is the likeliest depends on who you ask. 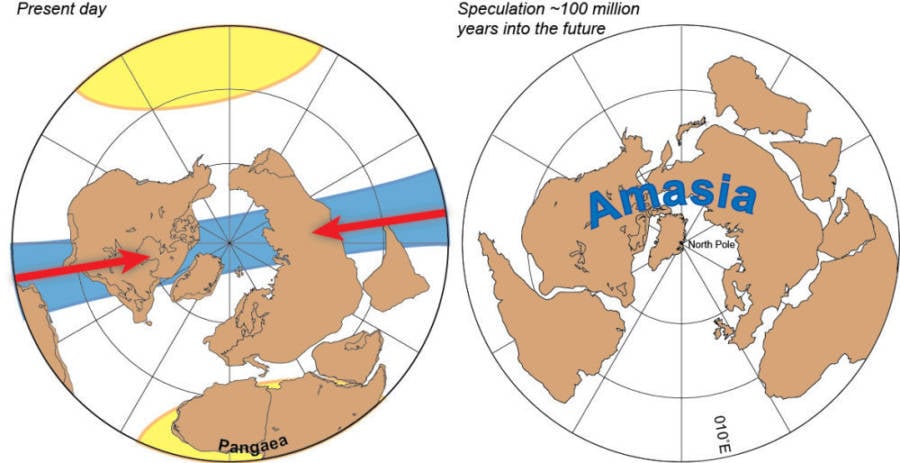 Researchers have been considering just what the next supercontinent will look like, and one theory suggests that all seven continents will merge into one giant landmass.

Researchers from Bangor University in 2012 identified four different scenarios in which the singular supercontinent could pan out.

The four scenarios are known as Novopangea, Pangea Ultima, Aurica, and Amasia — but the likeliest scenario depends on who you ask.

Each scenario takes into account the present movement of our continents based on their tectonic history. For instance, the Atlantic Ocean has been widening since it was created by the breakup of Pangea, and the Pacific Ocean is consequently shrinking.

Here, in the Novopangea scenario, a construction similar to Pangea forms in which all seven continents combine.

Therefore, says Brendan Murphy of St. Francis Xavier University in Nova Scotia, should these conditions persist, then a “Novopangea” scenario is likely. This is where the Americas will collide as they drift towards Antarctica. Meanwhile, Africa and Eurasia will become one and similarly drift towards the Americas to become the supercontinent Novopangea.

Murphy adds that it’s not just about figuring out how many different ways one can merge the continents together. Studying these different supercontinent scenarios could have a profound impact on how humans will progress.

“This is really important because it influences the evolution of our entire planet, including life that lives on it,” Murphy says. “For example, many people believe that supercontinents form and stood apart from their fundamental changes in climate.”

Video of one possibility for the future supercontinent, by the American Geophysical Union (AGU).

But some experts are in favor of the Amasia theory instead, like Ross Mitchell of Yale University. In the case of Amasia, the Americas, Africa, and Eurasia would move northwards and gather together at the North Pole. The Arctic ocean would be eliminated altogether and Antarctica could possibly be left in the cold at the opposite side of the globe.

Murphy adds that Mitchell’s scenario is certainly plausible, although definitely not confirmed.

Yahoo UKIn this scenario, the continents, with the exception of Antartica, drift northwards and gather at the North Pole.

For now, there’s no need to worry about the continents merging into either Amasia or Novopangea anytime soon. The next supercontinent won’t be formed for another 250 million years or so. Mitchell even went as far as to say that humans will probably be extinct by then.

Nonetheless, hypothesizing these scenarios has been both informative and fun for the researchers in the field and provides insight into how our world evolves.

Next, find out how pieces of the Grand Canyon wound up in Tasmania. Then, read about this lost continent that was discovered underneath Antarctica.